One of the many advantages to living with a host family in Uzbekistan was the free and doting medical care.  Upon arrival at my work site, I discovered this the hard way.  With the cold weather and the throngs of little children extending their germ-ridden hands to greet me each day at school, I quickly took ill.  I called the Peace Corps Medical Officer from the depths of my cold.

“Cold viruses have no cure,” the doctor told me.  “The body just has to learn how to fight the new strains.” 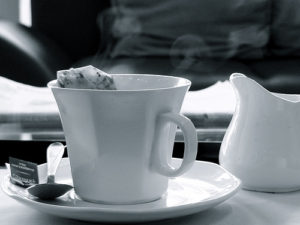 “So there’s nothing I can do?” I ventured.

“Drink lots of liquids and tea.  Some volunteers take several months to adjust to the new situation,” came the cheerful reply.  Did I detect a note of sadistic satisfaction on the end of line?  Must have been the long distance connection.

I sat down to my fortieth cup of tea, shivering and sniffling.  The doctor had delivered tough love and no matter how many generic cold pills I popped from my medical kit, I just had to suffer through the “adjustment.”

In the meantime, my host mom had been pleading to give me her natural medicines.  She said she had been mixing and selling her medicinal teas for years.

“Jett,” Sveta looked at me with sad eyes, “Drink my special teas.  I can’t sleep because I’m so worried about you.”

Well, what volunteer could say no to host mother’s plea like that?  The hell with Peace Corps’ prohibition on local medicine, I decided.  Tea is tea; it’s not medicine.

I took my first dose that evening.  The taste didn’t even reach me through my stuffy nose.  I went to bed miserable and woke up feeling a thousand times better.  I took the next two servings, and within a day was feeling perfectly healthy.  My host mother just smiled knowingly as I gave her the positive results.

From that day on, I always asked Sveta for one of her teas whenever the worst laid me low.  The colds were milder and my sleeplessness disappeared with one of her blends.  As such, I felt free to ask her any time the slightest illness threatened.

As the weather began to cool again in the fall, I got my first sore throat.  First thing that morning I told Sveta.

“Jett, come to me for some medicine just before bed,” she instructed.  Obediently, I nodded yes.

That evening I went into the kitchen and asked for the tea.

“Not tea, it’s different for a sore throat,” Sveta explained.  “Wait here and I’ll be back with the treatment.”

Curious but confident, I sat down to wait.  A few minutes later Sveta came back.  She had what looked to be a pumpkin wrapped in a wool scarf under her arm.  I wasn’t too sure what to expect, but she hadn’t failed me yet.

As I watched, she opened the cabinet and pulled out a small bowl.  Then a plastic bag.  Then a strip of cheesecloth. Then came the vodka.

Oh God, I thought, her cure for a sore throat is the same as my host dad’s: lots of booze.  I stood up and began to make excuses for not taking that kind of “medicine.”

I was confused but I sat down again in good faith.  She opened the vodka and poured some into the bowl.  Then she laid the cheesecloth in the bowl and soaked up as much vodka as it would hold.  With the strip saturated and breathing fumes, she folded it and placed it on my throat.

Dutifully I held the strip in place.  Sveta then took the plastic bag and folded it several times.  This was placed over the vodka cloth.

Again I did as I was told.

With vodka running down the outside of my throat for a change, Sveta pulled the scarf-wrapped object to her.  What could possibly be in there? I wondered.  She unfolded, unfolded, and unfolded the scarf to…nothing.  With a quick whipping action, the scarf was suddenly a thick woolen rope.  Deftly she tied it around my head binding the vodka-soaked cheesecloth to my throat.

“The scarf keeps the vodka in.  That way it works better.”  She confided her trade secret to me.

I had to admit, it was an interesting sensation.  Heavy and cumbersome, hard to breathe, just the thing for swollen glands.  I smiled and nodded, my true thoughts about the process quite concealed.

“Now go to bed, tomorrow you’ll feel much better.”  She smiled at me knowingly.

What to do but as she told me?  As I walked up to my room I reminded myself that the teas had worked before.  That Western medicine didn’t know everything.  That this couldn’t hurt, at least.

Then I saw myself reflected in the window.  I was the Woolly Lion.  I was the Goodyear Tire Christmas Wreath.  I was an astronaut.  I was wearing the world’s longest scarf wrapped around my head holding a vodka cloth to my throat.  I looked ridiculous.

I lay down in bed debating what to do.  Perhaps it would work.  Sveta seemed to know what she was doing.  But I doubted her; I tried to imagine some kind of scientific basis for this simple, yet extravagant, treatment.  I came up with nothing.  The extra padding began putting a kink my neck.  Suddenly, with a burst of free will, I ripped the thing off, took a deep breath and went to sleep.

Later that night, as the last cup of tea worked its way through my body, I awoke from tsunami dreams to a very full bladder.  I got dressed and prepared to go down to the toilet.  I stopped short as I looked into the courtyard.  The light in the kitchen was still on.  It had only been an hour since I had lain down and the family was still up.  Sveta was still up.  How to explain my missing treatment?  I sat down, trying to reconcile my sense of dignity with my bladder’s pressing needs.  I knew the truth, though.  I was going to have to put that scarf back on.

Resigned, I strapped the mass of wool around my head and went to the latrine.  Washing my hands, I dared a look in the mirror.  I was caught in a fuzzy gray cloud.  I was wearing the St. Louis arch on my head.  At no time in my life have I looked or felt more foolish.  Oh well.  My business was finished; I’d soon be in my room and out of sight.

I wobbled out to the courtyard, trying to get used to the unfamiliar weight on my skull.  I had no peripheral vision.  I reeked of vodka.

My host dad and his apprentice suddenly appeared from the side.  I nearly lost my balance craning to look at them with this burden around my skull.

Shrugging my shoulders, I nodded at them.  They nodded back.

They returned to their work in the garage.  I crept up to my room to take my medicine. 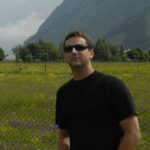 Jett Thomason was a TEFL volunteer in Uzbekistan from 2002- 2004 in the United States Peace Corps.  Since then, he’s worked in Afghanistan and Iraq and traveled extensively throughout Asia, Europe, and the countries of the Former Soviet Union. He is currently pursuing a masters degree in public policy from Georgetown University in Washington, DC. This story, “A Mother’s Medicine” originally appeared in Americans Do Their Business Abroad, a collection of Peace Corps stories.