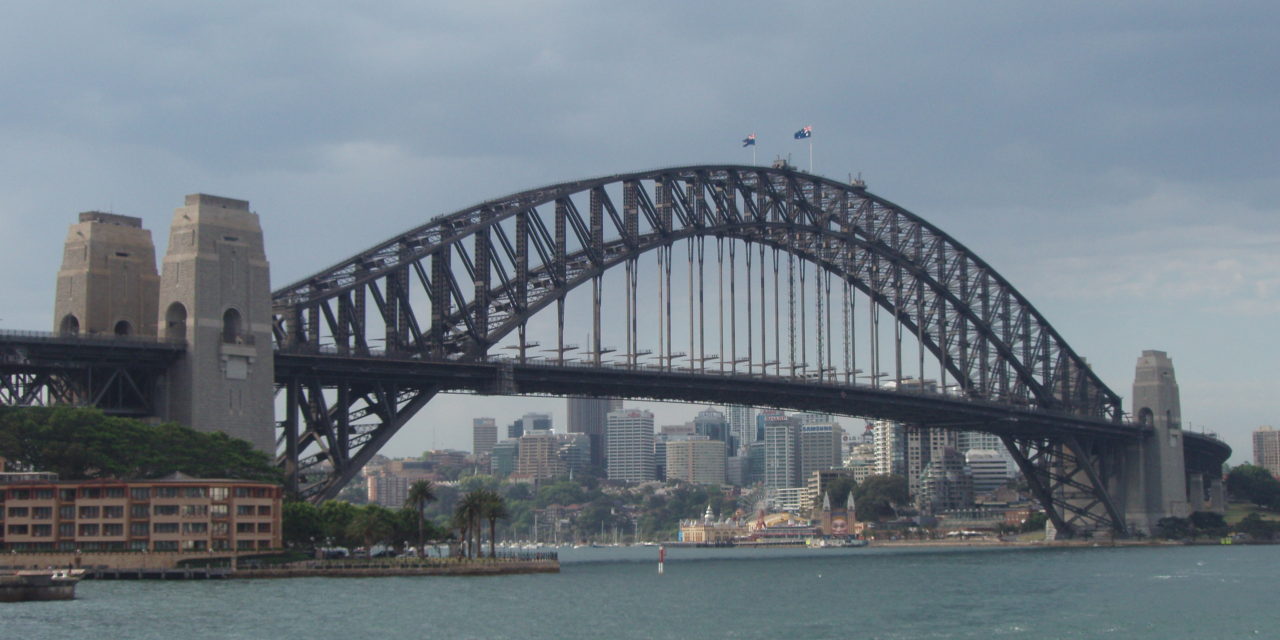 There are generations of travelers who have been brought up on tales from the Hippie Trail, that hallucinogenic trip from Istanbul to Kathmandu, later extending to Sydney, Australia.  Alas, Imperial war mongering and religious section eights took significant parts of that journey off the map forcing current travelers to negotiate the gaps with a series of ‘cut n paste’ classic routes. 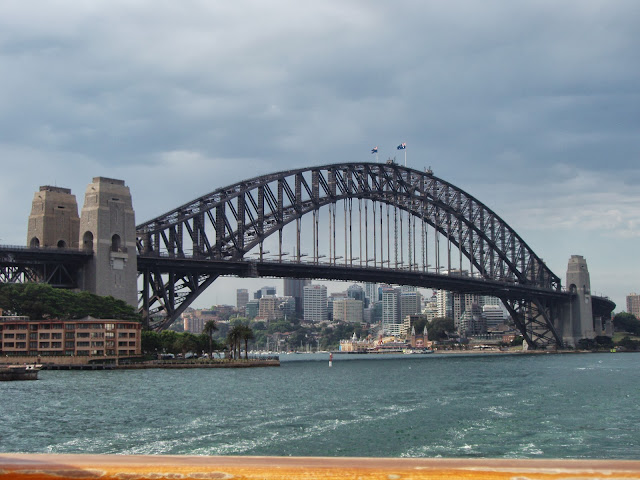 Sydney’s Harbour Bridge – The gateway to many classic trips in Australia.

One such classic must be Australia’s East Coast between Sydney and the Great Barrier Reef region.  It’s an epic journey dominated by the mighty ocean and a quest for good times.  Things have changed since the Hippie Trail days though, with spliffs and The Beatles making way for house music and booze, and it’s a fair bet to say that a new generation of traveler is being born out of stories of Antipodean debauchery.

Why not get in on the action and have your own stories to tell about this amazing part of the world?  And be assured, the debauchery is very much optional.

The following Australia East Coast itinerary is intended as a guide to some of the highlights of the journey and can be approached from the North or the South with distances in ‘hours by bus’ to give a general guide.

We’ve all seen Sydney on a thousand travel porn photos and fronting the news at New Years, but none of these images can prepare you for the jaw dropping magnificence of it’s harbour area around Circular Quay.  The Opera House alone is heartbreaking in its perfection but complemented as it is by the grit and steel of the Harbour Bridge and the ocean waters, it takes on an almost ethereal quality.  And whilst I would posit that the harbour alone makes it worth the DVT inducing journey to get to Sydney, there’s a whole lot more the city can rightly gloat about. 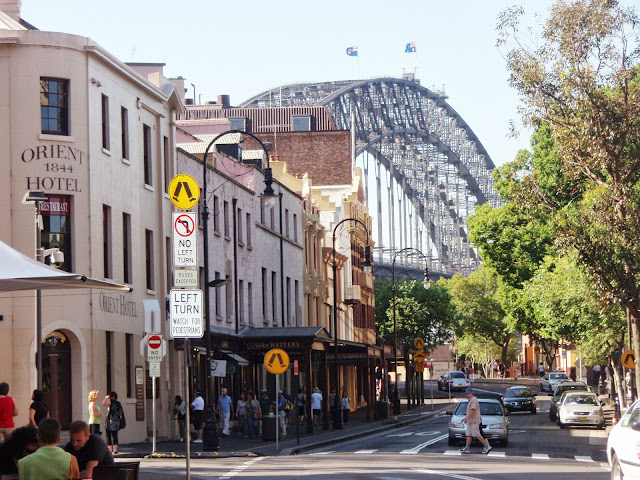 Ultimately, Sydney dazzles with its mix of peroxide blonde surf culture, exotic Asia, North American skyscrapers, European immigrants and Aboriginal arts. On paper, it sounds like trouble waiting to happen, and it does flare-up from time to time but for the most part people seem to be basking in just how ‘bloody’ lucky they are to be there.  As should you!

…..and our first taste of Australia’s manicured, blinding white, suburbia. Picture dystopian rows of houses without a soul to be seen.  But this isn’t what we’ve come for.  We’re here in search of fantastic beaches, panoramic headlands, migrating whales, oh and a giant banana, all of which can be found in Coffs Harbour, a town with an enviable location between ocean beaches and national parks covered in rain forest.  People come to the area to pick fruit (including bananas), explore the national parks, swim, surf and/or escape the hordes tearing it up in some of the East Coast’s marquee spots. 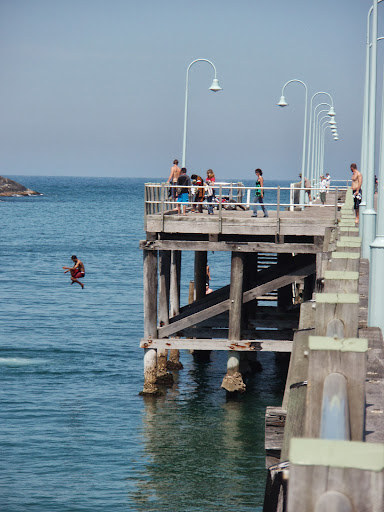 Save on accommodation and take a night bus (7-10 hours) from Sydney.  The Coffs Harbour terminal is a long, sweaty slog from the action so best catch a ride with one of the hostel pick-ups.

It’s hard to imagine suffering a bad mood in Byron Bay.  Everyone here walks around with that smug look of having found the good life and one suspects that Monday morning misery has been told, in no uncertain terms, to clear off.  Sadly, it’s a bit of an illusion as most people you see in Byron are mere groupies to the sun, sea and good times and will have to move on at some point.

But everyone wishes they could stay in this laid-back town and enjoy its fine beaches.  Visiting surfers should take note though, the breaks at Watego’s Beach (to the east) have been declared ‘locals only’.  There’s even a warning graffitied onto the rocks. So there!

In town, Byron’s celebration of all things hippie and organic means there are plenty of opportunities to get your granola on for brekkie, whilst visiting working-holiday visa travelers, desperate to drink away their grape-picking money, ensure there are some lively night spots. 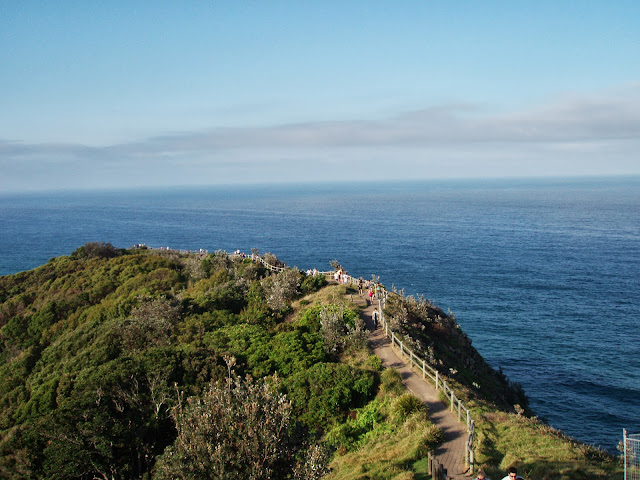 But it’s not all hippies and hedonism.  Far from it.  Byron welcomes all, from toddlers to ancient pensioners with it’s clear skies, sandcastles, and pleasant walks.  A fine example of the latter being a stroll around Cape Byron, the easternmost point of this great landmass, to the lighthouse of the same name.

Byron seems to be a stop on everyone’s East Coast itinerary.  Put simply, in the words of a wrinkled, beer stained old timer at the Coffs Harbour bus station, “You’ve gotta go to Byron.” Too right!

Next Stop – The Gold Coast

I thought I was going to hate the Gold Coast.  I had images of a boozy Disneyland.  A town of bad taste, ugly excess, and miserable hangovers. Basically, a waiting room for purgatory.  I was completely wrong.  I mean, yes, there are tacky gift shops, unimaginative pub crawls and the quite horrific Versace Hotel, but none of these things could spoil my good mood.  Maybe it was all the fine restaurants and cafes, the healthy looking people, breezy bike rides on the oceanfront, the boats bobbing around Marina Mirage, world class waves, the top class surf contests and bike races, and jogs on the beach.  That endless, endless beach.  Surely one of the most glorious stretches of sand on the continent, if not the planet.  In the balmy evenings I’d stroll along the oceanfront checking out one of the night markets and dream of making a life there.  I still do. 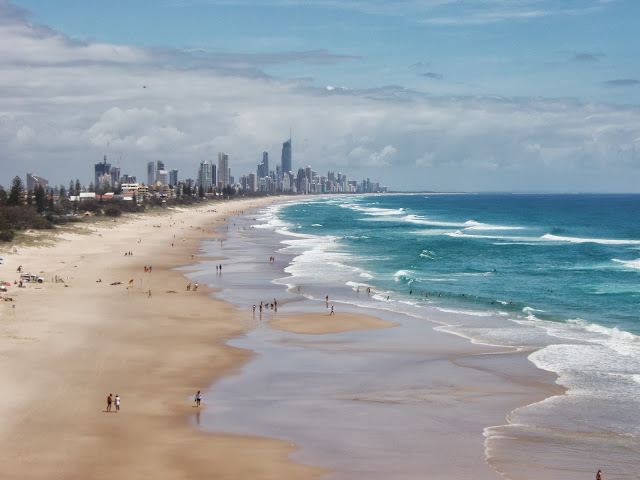 Golden sands and good times await on the Gold Coast.

From Byron Bay, the bus to Surfer’s Paradise in the heart of the Gold Coast takes 2-3 hours.

There’s a surf shop in Noosa whose sign is a battered surfboard with a massive shark bite taken out of it.  A real one.  It’s a radical sign that belays Noosa’s remarkable ability to balance sophistication and nature whilst still playing host to Australia’s ever present backpackers, surfers, and alternative types.

Noosa is actually a collection of three towns but it’s Noosa Heads by the coast where you’ll want to be, possibly basing yourself in the YHA hostel in the heart of town.  A grand old Heritage Listed building which manages to keep patrons happy without having to get everyone drunk. 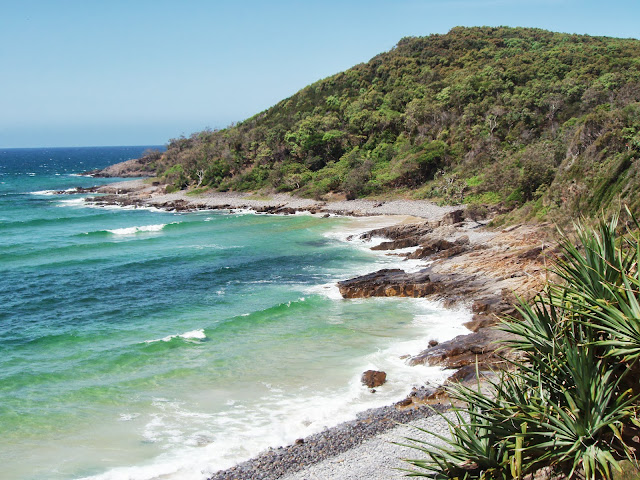 Fine dining and even finer hiking in Noosa.

Sophistication comes in the form of fine restaurants (worth a one-time splurge for those on a budget) and smart boutique shopping on Hastings Street that runs parallel to the beach.  As for the nature, well Noosa is dripping in it, so much so that one can work off the excesses of an urbane 5 star dinner, in a lush national park just 10 minutes walk from town, where you can discover dramatic coves and beaches and maybe spot the odd koala.

From the Gold Coast you’ll need to go to Brisbane (1.5 hours) and change for buses to Noosa (approx. 3 hours).

Literature on Hervey Bay is often at pains to let you know that this is/was the fastest growing city in Australia.  It’s a quite stupid boast as one could easily spend the day here and count the number of people you’d see on one hand.  The houses are here though, row after row of them but you’d have more chance of spotting an orgy of koalas than a street gang.  It doesn’t matter though, we’re here and we’re pleased to be so, as we can spend the day on the grassy banks overlooking the town’s mellow beach and take a dip in some calm waters.  And tomorrow we’re going to Fraser Island! 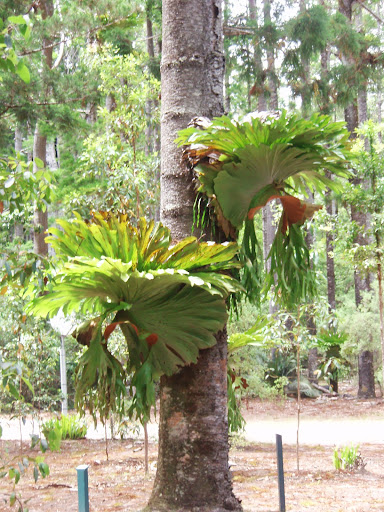 Fantastic nature on Fraser Island, the largest sand island on the planet.

World Heritage listed Fraser Island is treat.  It’s the largest sand island on the planet and, despite it’s popularity, is a wild and woolly experience. Surrounded by waters patrolled by sharks, on land (sorry, on sand) you can see great beaches, gnarly shipwrecks, funky colored cliffs and beautiful rain forest.  The highlight for many, though, is a dip in one of the freshwater lakes where the azure waters and brilliant white sand do a good job of disguising the frigid temperatures. 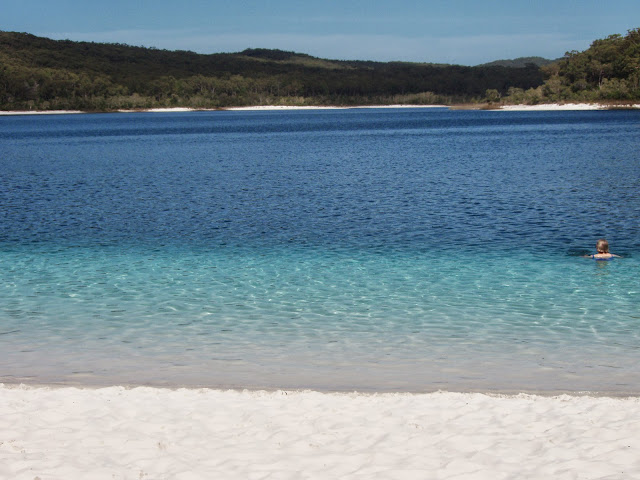 Take a cold dip in one of Fraser Island’s fresh water lakes.

Boats to the island leave from River Heads, 20 minutes drive from Hervey Bay and take approximately 50 minutes.  There are a couple of accommodation options on the island but unless you’re camping it may be cheaper to stay in ‘Hervey’ or nearby Rainbow Beach.  Getting around means renting a 4×4 or joining a tour.  Getting to Hervey Bay from Noosa takes approximately 4 hours by bus.

The Great Barrier Reef is long.  Very long.  Some 2000 km in fact and there are a number of towns between Mackay in the South and Port Douglas in the North that can offer access to the reef and it’s islands.  Cairns tends to grab the headlines and is synonymous with gap-year backpackers, rainforest zip lines and all things reef.  It’s also a decent transport hub and could be a last stop in Australia before hitting the South East Asia trail.  Airlie Beach has good access to the amazing Whitsunday Islands, and Studentsville, sorry, Townsville impresses with it’s waterfront esplanade.  Wherever one chooses to set up camp though, the state of amenities and on-land life are a mere bonus, for it’s the reef that, quite rightly, steals the show. 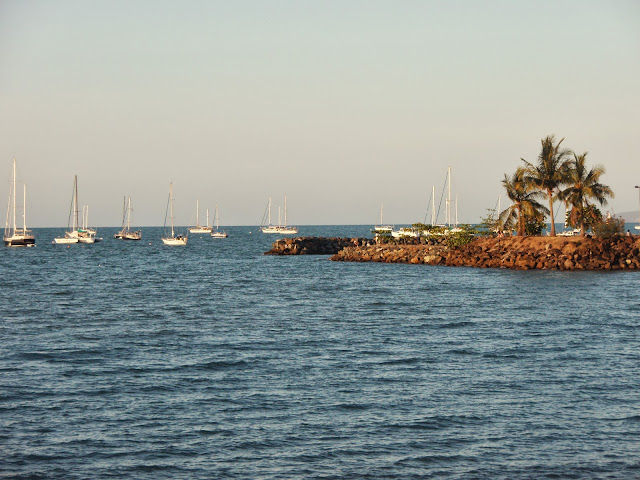 From Hervey Bay it’s a 24 hour slog to Cairns.  You can cut that in half if you make a stop in one of the southern towns of the Great Barrier Reef region.

Tips For the Road

It seems like stating the obvious, but Australia is big.  Much bigger than many people are ready for and as such covering ground can drain a lot of cash.  If you’re using the bus, keep an eye open for ‘hop on, hop off’ deals which will be cheaper than buying tickets separately for each journey.

For those traveling in a group, buying a cheap car could be the best way to go.  You’ll also be able to carry camping gear and save on accommodation costs.

As was hinted at earlier, Australia’s hostel scene attracts large numbers of party hard, post-grad, gap-year travelers and so could be heaven for some, a sleepless nightmare for others.  In my experience it’s the cheapest most spartan hostels that tend to be quieter and more laid back.  Certainly, any place that brags about its pool, in-house bar, TV’s in every dorm and themed party nights isn’t worried about it’s patrons getting a good night’s sleep. 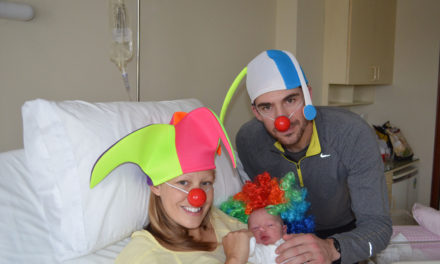 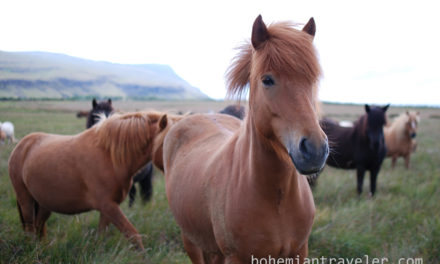 How to Save Money in Iceland 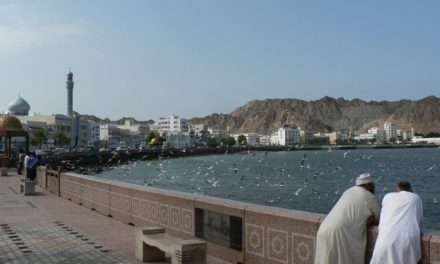