Clear Skies and Hefeweizen Haze: Hiking in the Austrian Alps 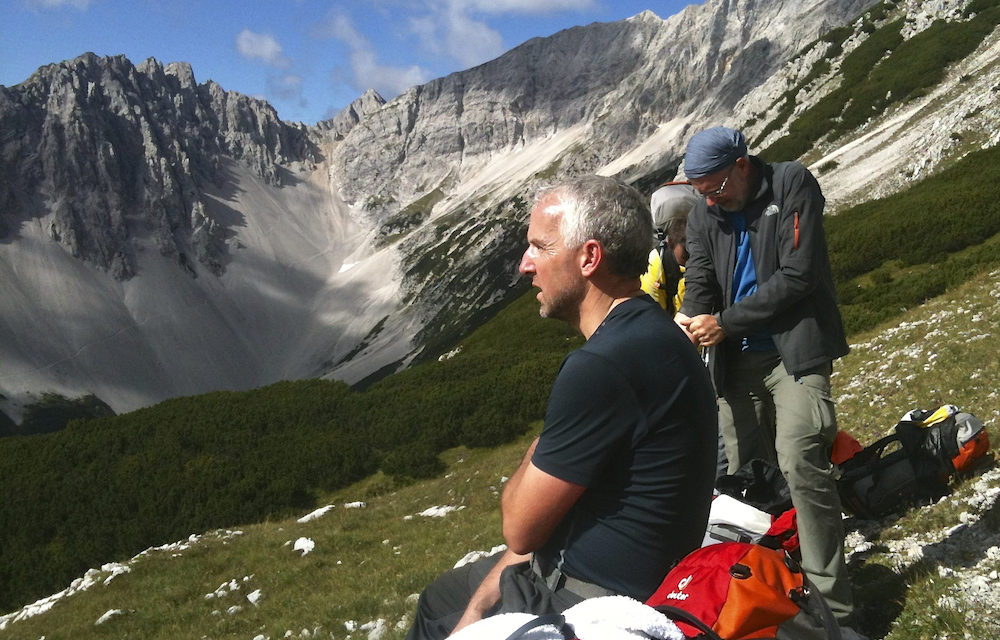 The Audi A4 screamed down the Autobahn at more than 120 miles per hour, punching a tunnel through the early morning mist that coated the Bavarian countryside. With each minute we were a couple miles closer to four days of hiking in the Austrian Alps. Curiously, of the three Germans and one American writer in the car, only one had ever heard of The Sound of Music.

Olaf pressed the accelerator closer to the floor, the speedometer’s needle inched passed 130, and I felt my lips curl into a grin. Audi? Autobahn? 130 mph? These are a few of my favorite things. 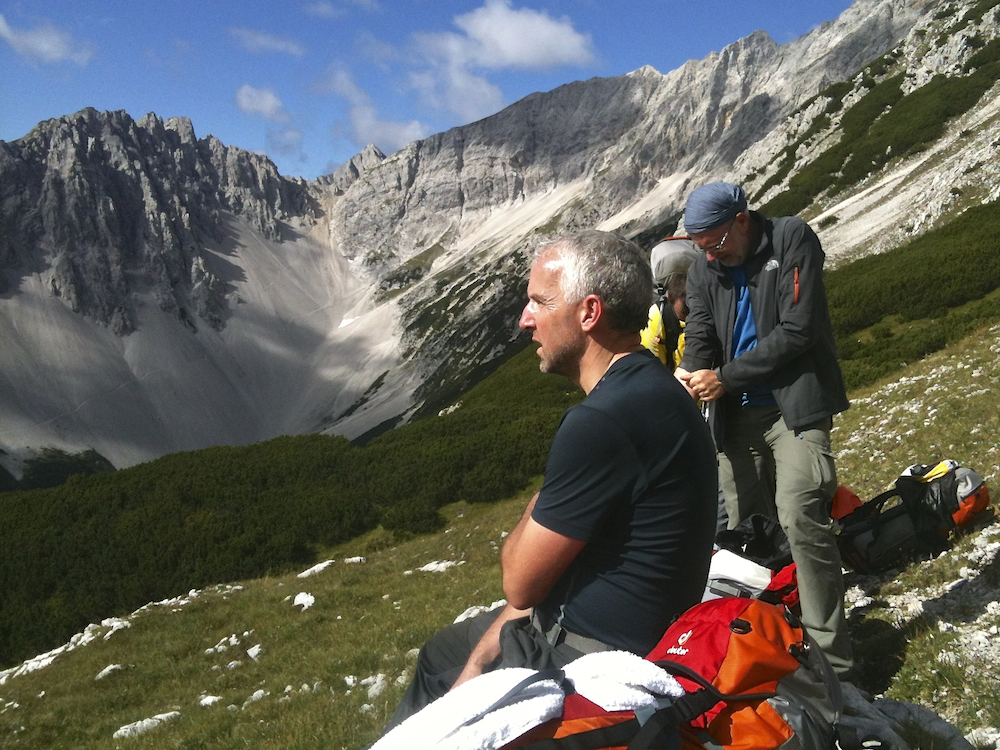 Three hours later the Audi’s wheels ground to a halt in the gravel parking lot of the gondola station in Seefeld, Austria, where two other companions, Stefan and Ralf, joined us. We glanced toward the top of Reither mountain in the thick of the Karwendal Alpine Park.

“We go there,” Günter said.

Günter and I have known each other for a few years now. He has wispy white hair, ever- present stubble, and a reserved way about him that causes few words to cross his lips. When he does speak–in English or German–you want to listen. He had invited me along to spend a few days on a “wandern” or hiking tour with his friends. I soon learned “hiking” in the Alps meant something entirely different from what I expected. 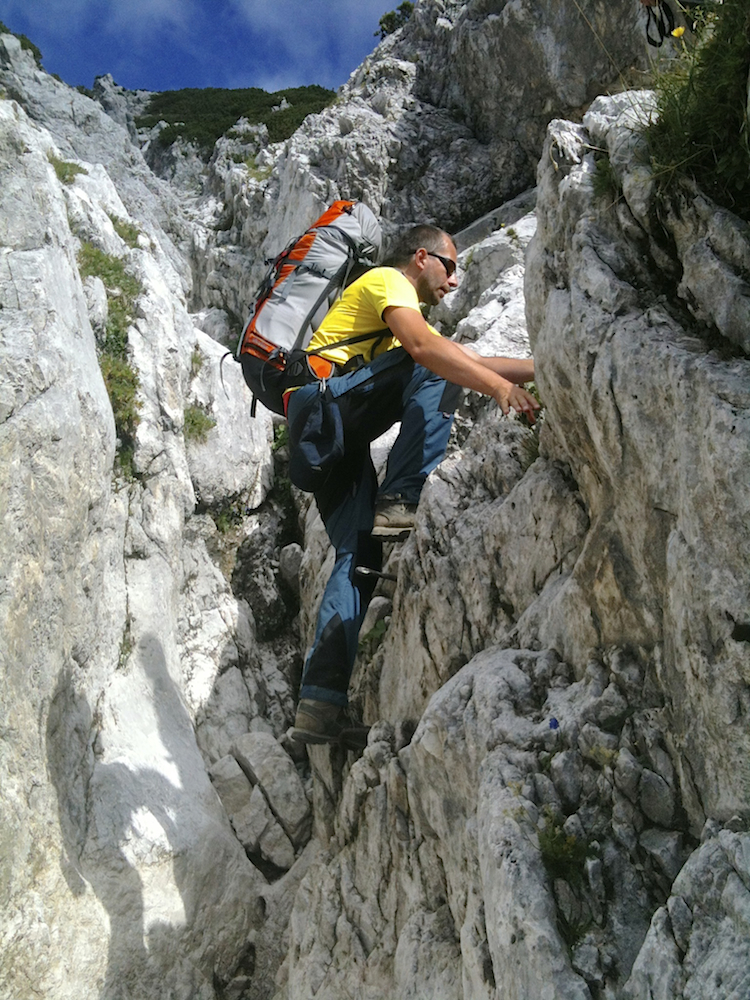 At more than 7,400 feet, my lungs burned for air as we zigged and zagged our way toward the first summit with 30-pound backpacks. A short via ferrata segment waited for us around the corner: a fixed ladder to cover a fifteen-foot vertical gap in the trail’s elevation. The precious mountain air faded with each step until finally we reached the top and stood in the shadow of a twenty-foot tall cross, surrounded by a 360-degree view of Tyrol, an area of Europe that includes an eponymous Austrian state and lands in northern Italy.

A few minutes later, a kelly green jäger hat appeared from the below the summit line. This was followed by the face of a man easily pushing 70 years of age, wearing lederhosen and seemingly exerting no more effort than reaching for a TV remote. Indeed to be a Tyrollean is to grow up with hiking in your blood and mountain air in your lungs.

“Der Weg ist das Ziel,” I would hear Günter tell me later. “The way is the goal.” 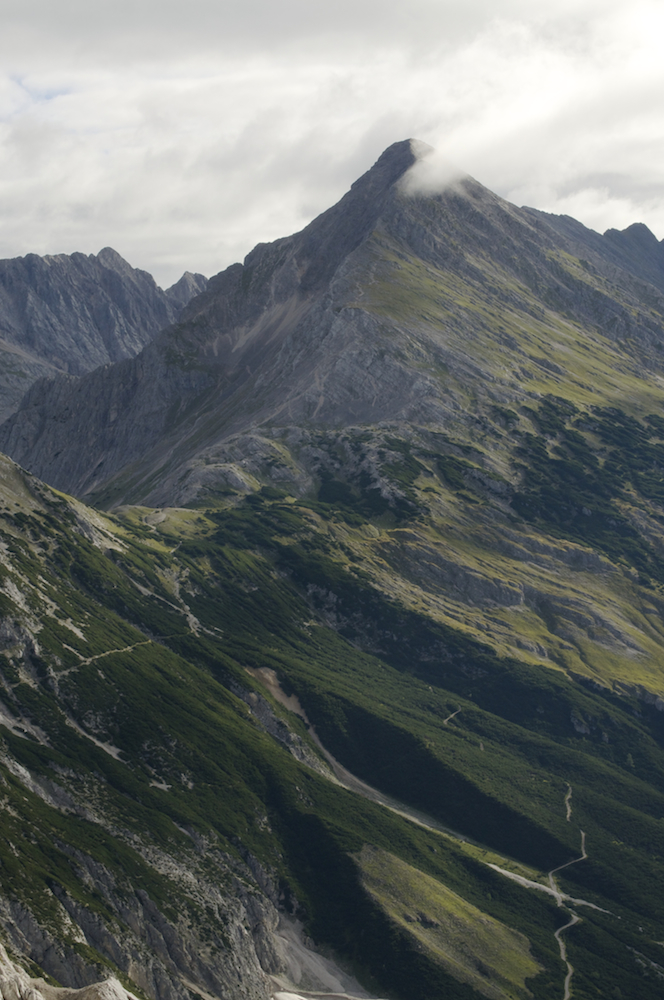 We arrived later that afternoon at Nördlinger Hütte, a weathered brown building that stood at 7,342 feet on a 45-degree mountain slope dotted with goats munching leaves of alpine grass. Alcohol flowed around the table in celebration of the day’s small–but not less substantial– victory. As the sun set and the temperature dropped to the 40s, we continued the celebrations inside.

With a panoramic mountain landscape, one small city, and several villages, Tyrol is the very definition of idyllic. Here, one is never far from the clammer of cow bells in a valley or on a mountainside, and the smells of lightly toasted Kaiserschmarrn (the country’s unofficial dessert) and freshly poured hefeweizen seem ever present in the thin air.

Nördlinger, which opened in 1898, is one of hundreds of such “mountain huts” that can be found throughout the Alps. The vast majority of these are supported by the legendary Deutscher Alpenverein (German Alpine Club). They each serve traditional cuisine from the area as well as provide a place for travelers to rest on extended hikes like ours. If you’re a member of the club you get a discount on accommodations and the knowledge that no matter how full the “hut” might be, you’ll always be offered a bed. 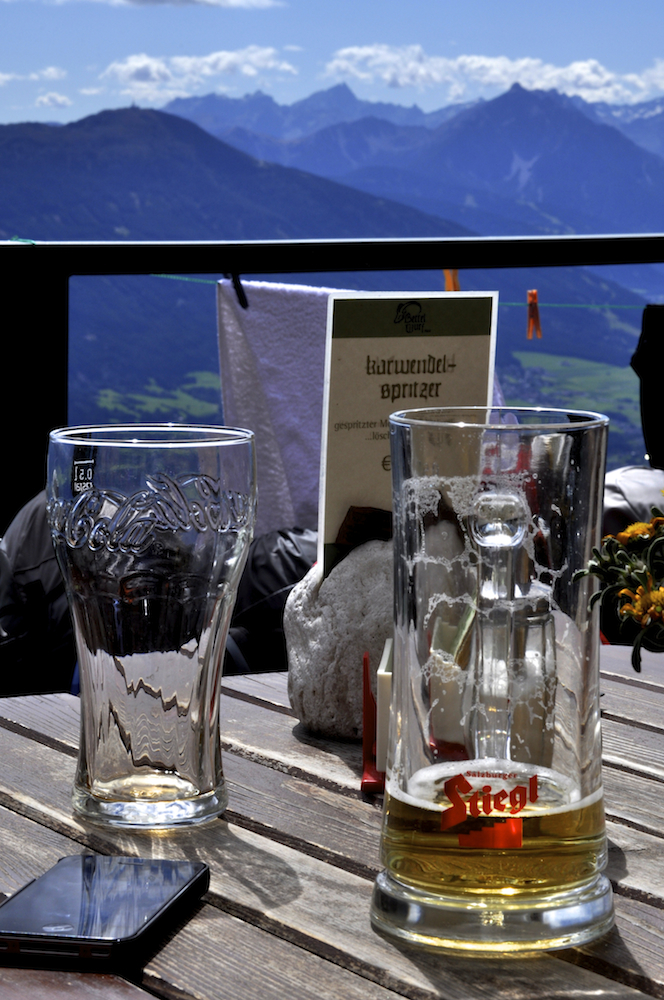 Gabi, the no-nonsense manager checked us in and commented on Ralf’s 6’ 8” frame.

“We’re from [an area near Münster],” Ralf explained before nodding in my direction. “He is from the United States.”

“Oh,” Gabi looked at me and then back at Ralf, “he is a little bit smaller.”

We stowed our rucksacks in our tiny room with just enough space for six bunk beds. A small window faced down the mountain slope at the foot of which lay a village. Then it was back to our table for another round of hefeweizen and beer. Within what seemed like seconds, Ralf, Olaf, Stefan, and Günter had already dealt a few hands of Dopplekopf (“double-headed”), a four- person-only card game popular in central Europe. Michael and I instead spent the evening talking and getting to know each other and wondering what tomorrow might bring.

Even in early September the Alps can offer up a grab bag of weather from two feet of snow to 85 degrees. Gabi greeted us on the morning of September 1st with the news that snow was in the forecast and we should think about heading down rather than getting stuck at this altitude.

In the heavy mist we set off for Solsteinhaus (our next “hut”), making our way along a pencil-thin trail with soggy Alpine grass clinging to the mountainside on our left and 1,000+ foot drops to our right. Our path changed to reveal ghostly gray moraine–remnants of the last ice age–and large patches of summer snow. A fifty-foot scramble up boulders and between fissures brought us to a remote, grassy overlook surrounded by dozens of naked mountains that had cast off their glaciers thousands of years ago.

Stefan, who has spent three decades hiking this area, gazed off as if in the last thirty years he had never seen anything like this before. If anyone has considered hiring a “Sage of the Alps,” I think he or she should interview Stefan. He walks docent-like over these rocks and via ferrata without breaking a sweat, naming off peaks, valleys, distant glaciers as if they were childhood friends or longtime neighbors.

Arriving at Solsteinhaus (elevation: 5,920 feet), one might begin to think that every day’s successful hike would demand shots of obstler (fruit schnapps), a few handmade knödles (bread balls in soup), and a half liter of hefeweizen. 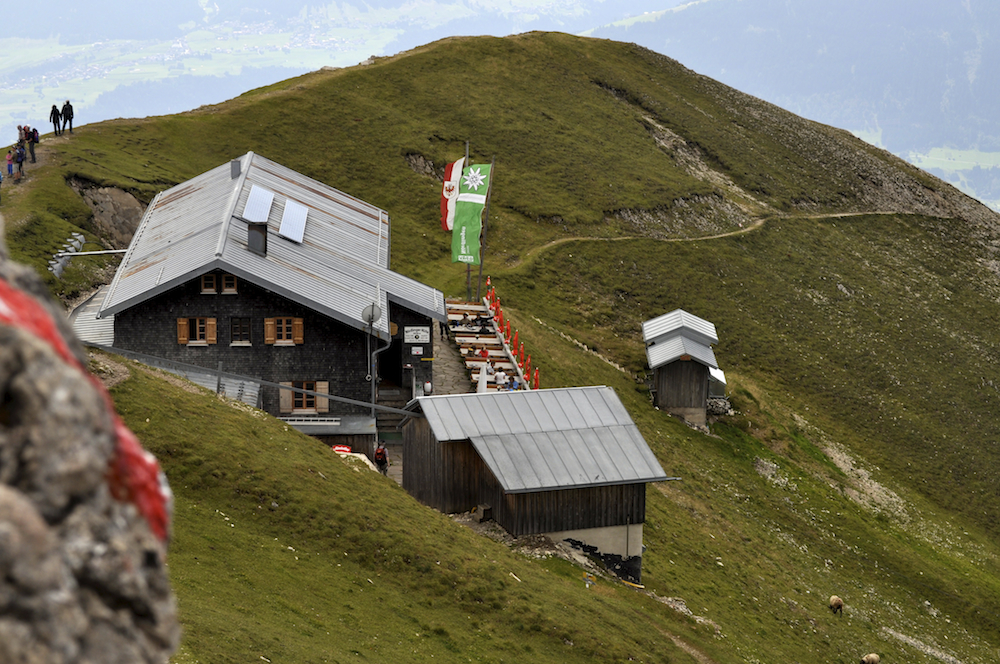 These huts are the mountain equivalent of hostels without the mediocre guitar players with tribal tattoos or dirty dishes piled in a sink. No, the people here are civilized folk, mature in age and temperament, who enjoy hearty food, good drink, and the serenity of high crags, sparse air, and Alpine camaraderie.

Danke, I think we will have another round.

Morning brought with it the promise of the best weather yet and the most challenging hiking I’d experienced. Within a couple of hours, we were scrambling up a 45-degree slope of tennis ball sized moraine, taking two steps forward and slipping a half step back. Sweat dripped off my head; my ankles burned; and the only comfort to be had was the knowledge that the top of the mountain was always a few inches closer.

We trudged onward and upward making it through another via ferrata before summiting and taking in a panoramic view of Innsbruck and the glacier-covered peaks of northern Italy. 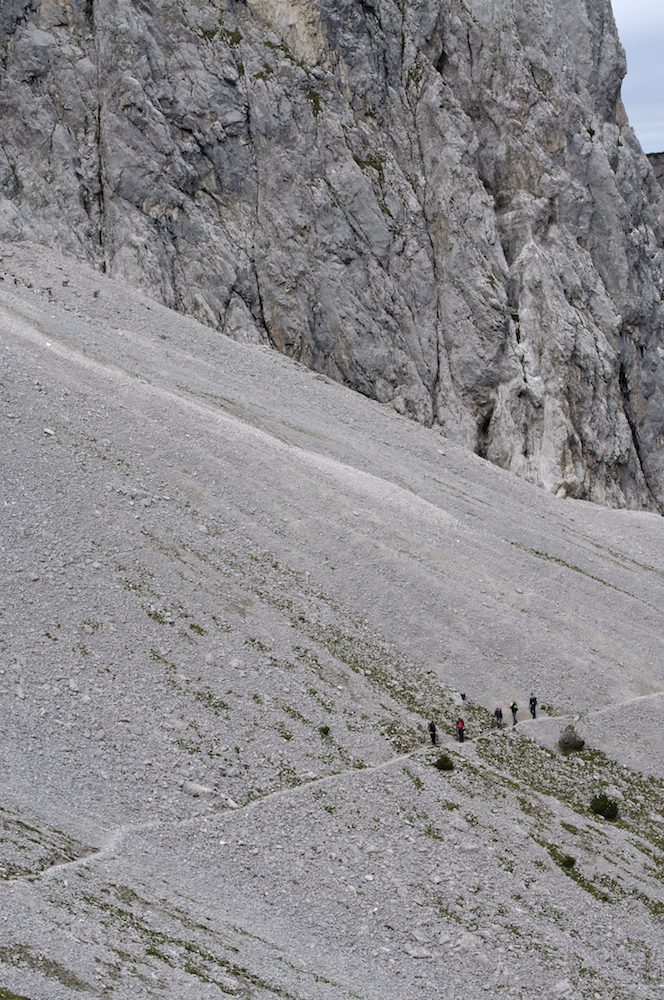 The beauty of the Alps comes at a price. Indeed for most of the year the land can be unforgiving. While trekking the last three hours to Pfeishutte, we passed two memorials. The first was a bronze plaque affixed to the coarse mountainside that told about founder of Pfeishutte itself, who was killed in an avalanche in the early 1950s. The other, erected on a stone in the valley, was for a small group of hikers who were caught in snowstorm and died a mere ten minutes from the warmth and safety of the same hut. Suddenly my challenges among the mountains seemed trivial.

The last evening of our trip I watched the sky fade to a hazy pink as the lights of Innsbruck click on a mere 7,000 feet below. When the local language isn’t your first, photography books are always a welcome respite. That night, I flipped through Reinhold Messner’s “Meine Alpen” (My Alps) and gazed at late 18th-century drawings of men in impossibly elegant attire taking on the summit of Mont Blanc. Two were carrying a ladder reminiscent of the one we had used a few days before.

A young woman with deep blue eyes and a charming face came up to me and asked if I was a photographer. I glanced at the giant DSLR in front of me before telling her the less glamorous truth: “I’m a writer.”

She sat down anyway. 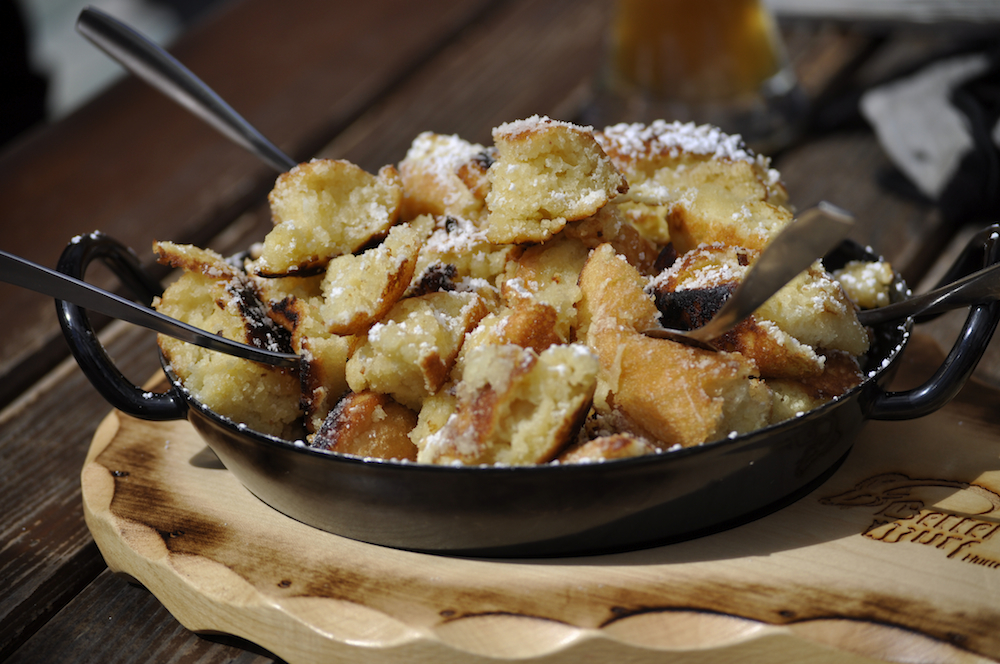 Claudia, it turned out, grew up in the valley below, had just come off a lengthy stint in marketing and was wanting to switch gears and focus on something more personally fulfilling: food photography.

In fact, Claudia’s predecessor at her old company was managing the very “hut” we now found ourselves in. Gabi–yes, another Gabi–left Claudia’s old marketing job a few years back in order to join her husband here at Bettelwurf Hutte, shuttling hefeweizen and dumplings from kitchen to table and managing a constant stream of hikers and climbers. Now it was Claudia’s turn to find her own way–a new “Weg”–after leaving the marketing world.

We ended up talking in the soft, warm glow of the room until everyone had left for bed and Gabi was cleaning off the tables. There was half a beer left in front of me, but I couldn’t drink it. I was too tired and the morning would come too early. Claudia and I said goodnight, and I listened as her footsteps against the creaky wooden steps faded into the stillness of the “hut” at night.

These Alps can be deadly or beautiful, their vastness can bring us to our physical limits and then open our spiritual senses. That’s about as apt a metaphor for life as there is. The paths we take and the places they lead aren’t always that well marked and who knows what they hold around the corner. But that doesn’t really matter. After all, as Günter told me one time, “Der Weg ist das Ziel”–the way is the goal. 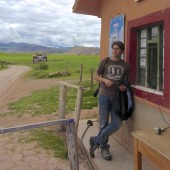 An ex-pat by happenstance, Michael has spent most of the last three years in and around Germany. But he still finds time to make it to Latin America. His work is available at www.michael-ward.com. 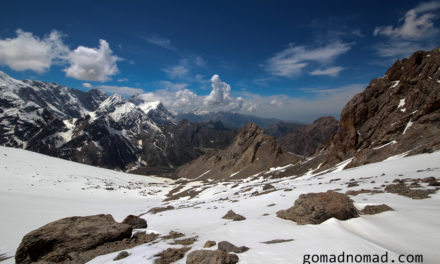 Your Guide to the Fan Mountains of Tajikistan 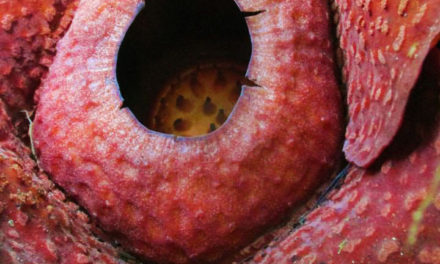 Photo of the Week: Rafflesia Flower of Borneo 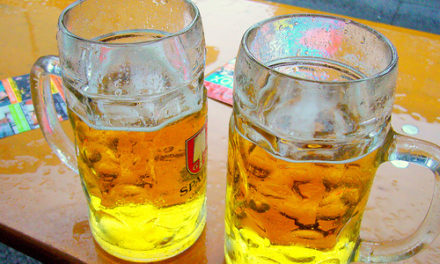