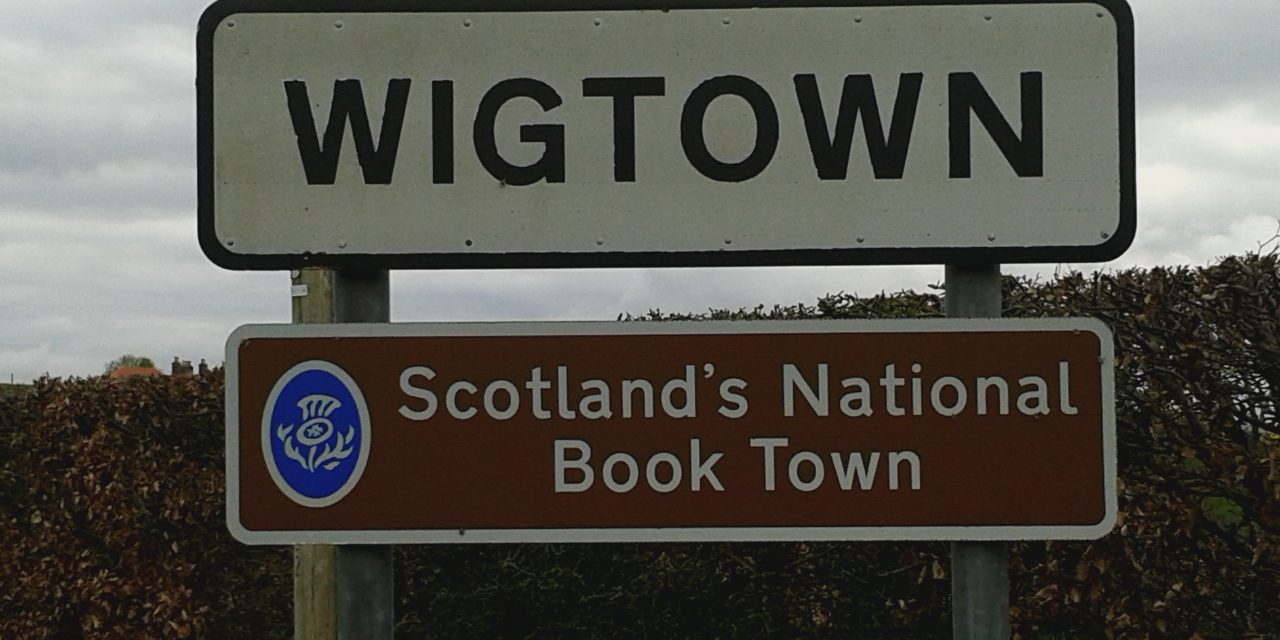 Had it been three years later, eighteen-year-old Margaret Wilson, a farmer’s daughter, and farm tenant Margaret Maclachlan, aged 63, would have survived. As it was, these two women were bound to a stake and drowned by the rising tide of the River Blandoch, for refusing to accept the King as the head of Scotland’s Presbyterian Church, which recognizes only Christ at its head.

I traveled to Wigtown, Scotland’s officially-designated national book town, in search of the written word, but discovered while there a lengthy and lingering history that remains close to the hearts of those who live there.

The long and uncomfortably tight rail journey in the seated carriage of the Caledonian Sleeper from London’s Euston station to Glasgow Central, nor the dismal meal options of my Dumfries stopover, could dampen my enthusiasm for sitting behind a wooden shop counter for a week of graft and willingly paying for the privilege.

And I’m not the only one. So great is the demand to do likewise that I managed to bag one of the only remaining weeks of availability for the next two years. Though I thought my journey north was distance enough, previous voluntourists have not only traveled from the likes of Spain’s Catalonia, and taken the eleven-hour flight from California for the privilege, but some have loved the experience so much that they have upped sticks completely and made the town their permanent home.

The Open Book in Wigtown, Dumfries and Galloway, is a bookshop like no other. Even stuffed to overflowing with a stock of second-hand tomes ranging from local history to natural history and biography, it cannot claim to be the largest second-hand bookstore in the country (that honor goes to the bookshop called simply The Bookshop slightly further along Main Street) but it is unique none the less. The Open Book became the first in the world to open its doors to wannabe bookstore owners to run for a week or more and become, however temporarily, part of the local community.

The spotless bijou one-bedroom flat above, accessed by an external door, and decked out simply in neutral colors, completes the package. As I soon learnt, what you get up to once you’ve been handed the keys to both shop and flat is entirely up to you. You don’t even need to open the store at all if you don’t fancy it, though obviously, that’s not the most welcome scenario for the team of community volunteers that help keep The Open Book in petty cash and ticking over those rare times the diary is empty of bookings. While some visitors are happy to keep things simple and spend the majority of their time in the shop or above it, the community is definitely eager for the shop to host talks, readings, and other events. It can make it nerve-racking even knowing where to start, especially if like me, the nearest you’ve ever come to running a shop is playing at it as a child. 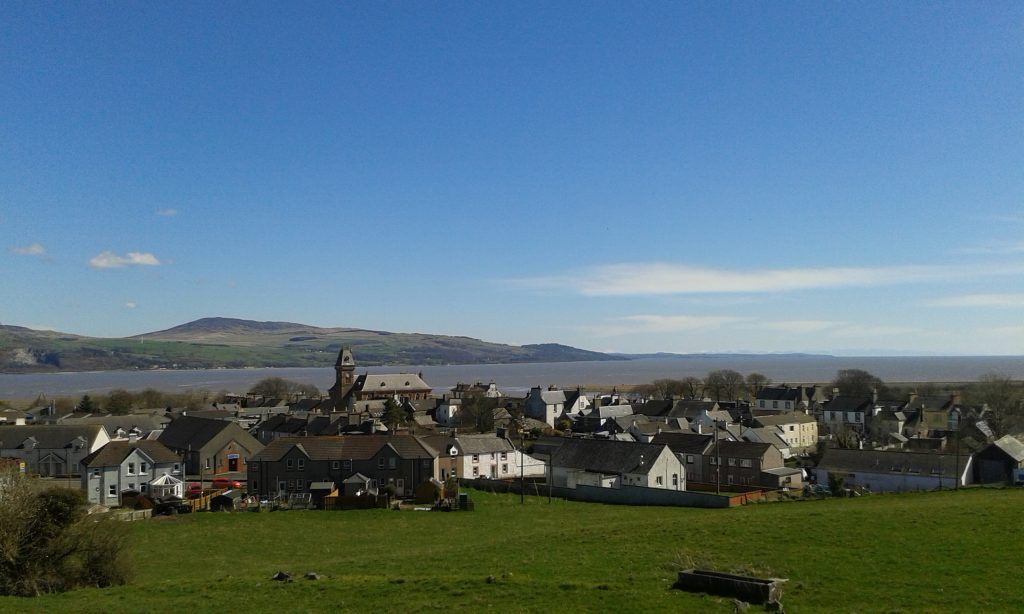 Wigtown from its nearby hills

I’m met off the bus on Main Street by George, one of the community volunteers. To one side of the bus stop stands the centuries-old mercat (or market) cross and renovated gardens, the location of a market every Saturday during the summer months. ‘I’m glad to see you made it here okay,’ he says, shaking my hand warmly. ‘Not many people choose to get here by bus, and the one lady that did had so much luggage with her that I had to bring my car around to take it all to the shop!’

Tall, neat, and probably well into retirement (his bright eyes and healthy swagger make it hard to discern his age), George leads me the hundred metres or so to the shop’s corner-facade that will be mine to do with what I chose for the next seven days. I get my first interior glimpses of the book-lined shelves through the two window displays. Perhaps fittingly, the smaller of the two windows has been designed to showcase a 1950’s edition of Alice’s Adventures in Wonderland (I feel a little like Alice peering down the rabbit hole myself) while the larger main window hosts a range of weighty interior design guides.

As George shows me inside, I ask what time I should open up. ‘Well, what time do you want to open?’ is his reply. ‘When we ran it as volunteers we used to open ten till four, but if there’s no one about you might want to shut up early and head to the beach or whatever. It’s really up to you, it is supposed to be a bookshop holiday, with emphasis on the holiday’.

That, except for being told where to find the light switches, is gratifyingly all the guidance I get. In a world in which every last movement can feel pre-planned and bound by endless rules my permitted spontaneity is incredibly liberating. No one chaperones or checks on me during the week. Not just the opening hours, but the window displays, table layouts, and shelving organization are all down to me to decide and design.

The only thing that stops me switching radio stations as many times as I desire the next morning is the steady stream of locals that form an impromptu welcoming committee. There’s American eccentric Renita, Californian former jet-propulsion specialist Jessica who loved the place so much on visiting she’s written a book about it (Three Things You Need to Know About Rockets), and Nanette who already knows my name and just drops by to give me a handful of homemade shortbread wrapped neatly in a paper napkin ‘to have with my tea’. 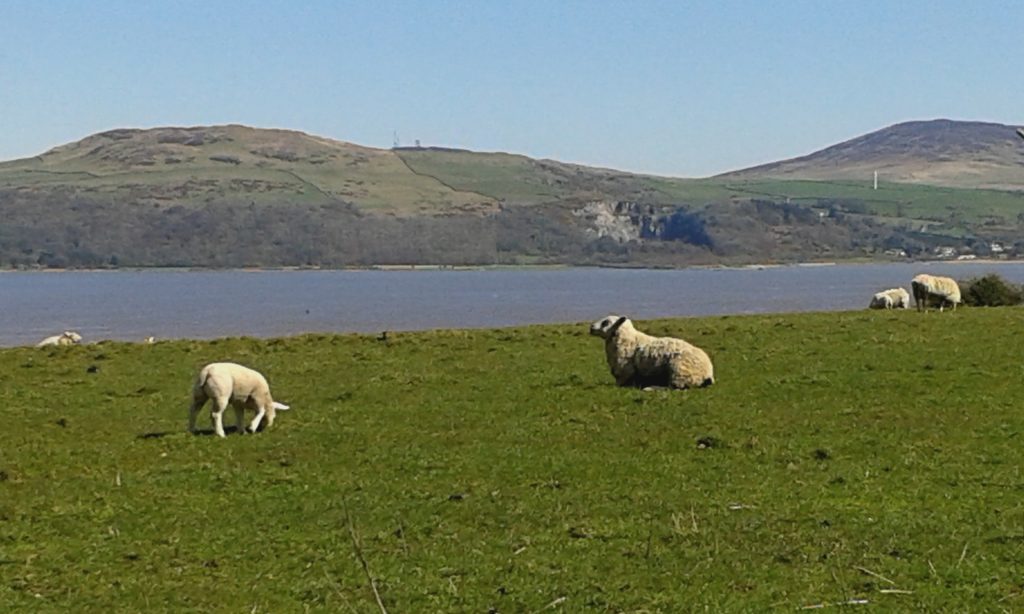 Wigtown – and its sheep – enjoy a warming microclimate

If the welcome I’ve received has been better than I had ever anticipated, so too is the temperature. It’s mid-April and warm enough for short-sleeves. The town experiences something of a microclimate, with the Gulf Stream sending warm winds in its direction. While it may not be comparable to a weatherman’s favorite such as Ibiza, it does mean Wigtown enjoys a much milder climate than even nearby towns. But Henrietta admits it’s not always this warm. ‘It can be pretty dreith’, the Gaelic for miserable, cold, or wet ‘in the winter months’ she says. The same could have been said for the town’s economy just twenty years ago. 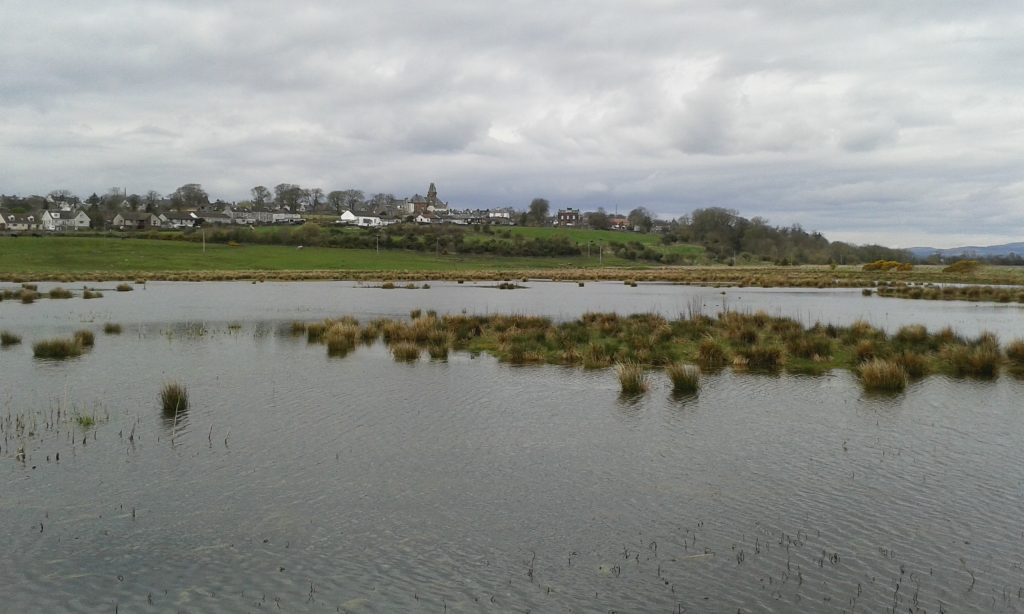 The town’s original harbour area – now a haven for birdlife

Thanks to its status as a Royal Burgh (or borough) first granted in 1341, and later County Town status, Wigtown’s original harbor on the River Blandoch had a virtual monopoly on local trade until the nineteenth century. But with the coming of roads and rail, the town found itself in less than an ideal position geographically and on the periphery of trade. The loss of its administrative and legal roles in the last century, and the closure of two major local employers, a creamery and Blandoch whiskey distillery in the 1980s, added further to the sense of demise.

Wigtown was chosen to become Scotland’s national book town – a sort of pre-planned, tartan-clad Hay-on-Wye – in 1997 in a deliberate attempt to stimulate its lagging modern economy. It seems to have worked. Not only are there now eight independent second-hand bookstores (and more opening all the time), but also three annual literary festivals in the area. A gift shop full of locally-designed crafts and a small plethora of restaurants and cafes all serve visitors and locals alike without pretensions. Blandoch distillery reopened just a mile west of town, with a visitor center, in the year 2000.

Though at first glance Wigtown may appear to be more about putting your feet up with a good book, or whiling away the afternoon with Blandoch’s rare lowland single malt, there are other reasons to add the town to a traveler’s bucket list.

The elegant County Buildings have also been renovated as part of the national book town status, and Main Street with its gardens and bowls green returned to its medieval layout. Though the original harbor has been lost to a change in the river’s course, a sign now points to its site beside some picnic benches and a small car park close to the Martyr’s Stake. It is one of two monuments that recall events of 300 years ago that still seem to shape the town. 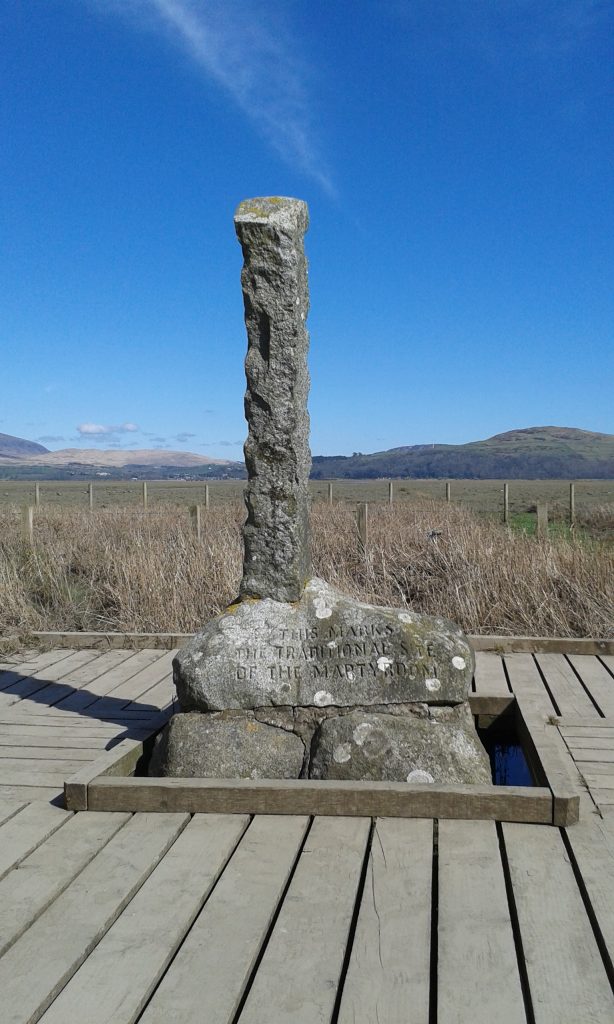 At the end of a wooden walkway that leads out over the mudflats, the granite Martyr’s Stake marks the traditional spot where the two female covenanters, Margarets Wilson and Maclachlan, were tied to stakes to await either a recant of their refusal to swear the Oath of Abjuration or the rising tide of the Blandoch. Three men were hanged for the same crime. They lie buried in the graveyard of the Old Saint Machute’s Kirk a short distance away.

The covenanters were a group of Presbyterians who opposed King Charles II’s imposition of church hierarchy and the rule of bishops on Scottish churches, seeing it as an attempt to return Catholicism to the country. The area around Wigtown was a focal point for the group. The assassination of Archbishop James Sharp, Primate of Scotland, in May 1679 led to more active suppression of the covenanters, named after the Presbyterian National Covenant of 1638 that declared Christ alone as the head of the Presbyterian Kirk.

A Fifty Year Struggle continued until 1688. On 8th November 1684 the Oath of Abjuration, renouncing the Presbyterian National Covenant and detailing the king’s religious authority, was posted on the doors of every church, and from that December all Scots were required to swear the Oath by pain of death. The resulting period became known as the Killing Time. Margaret Wilson and Margaret Maclachlan became martyrs on 11th May 1685, just three years before the Fifty Year Struggle ended. The memories of what went on did not, and on the appropriately named Windy Hill a red stone obelisk stands ‘as a lesson to prosperity never to lose or abuse those glorious privileges, planted by [the martyrs’] labours, rooted in their suffering, and watered in their blood’. 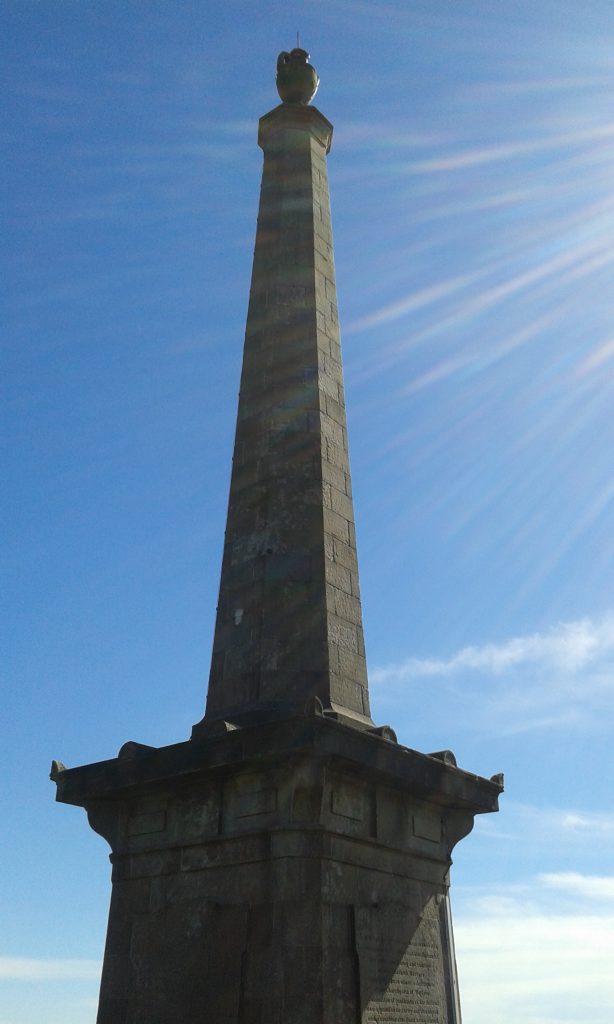 Windy Hill provides views not only over Wigtown, but also towards the nearby Galloway Hills that are dotted with footpaths. It is a breath-taking landscape of green hills that seem to meander almost endlessly toward the mudflats and beach of the river, a haven for a number of bird species. Their gateway is the town of Newton Stewart, just a few minutes away by road, making Wigtown the perfect place to combine passions for literature, history, and the great outdoors, although I will remember it for the warmth of its welcome. 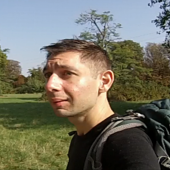 Ian Packham is an adventurer, award-winning travel writer, and motivational speaker. His biggest adventure to date was the first solo and unassisted circumnavigation of Africa by public transport, a journey of thirteen months and 25,000 miles. The book, Encircle Africa: Around Africa by Public Transport, is published in ebook and paperback. Find Ian on his website encircleafrica.org and follow him on Twitter @ianMpackham. 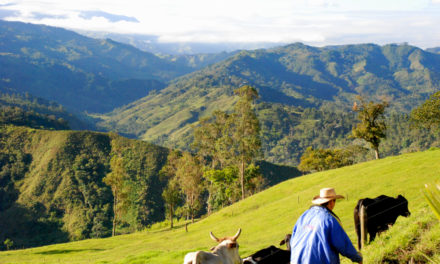 Chilling out in Colombia’s Coffee Country 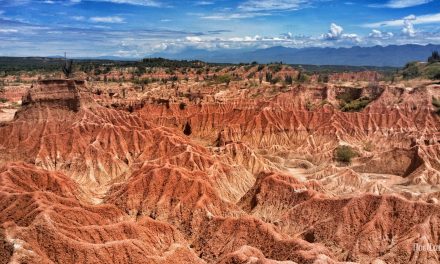 Photo of the Week: Tatacoa Desert 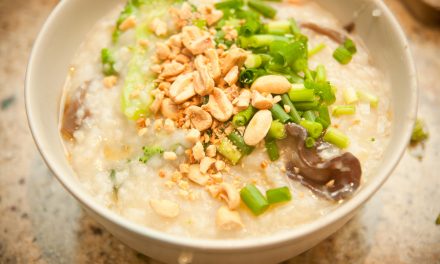 What to Eat in Southeast China 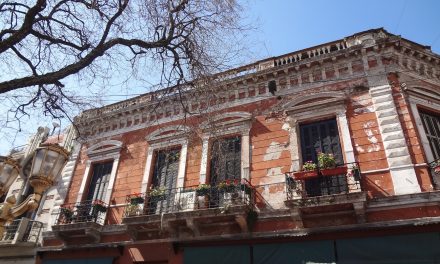