An American in Peru

What time is it? 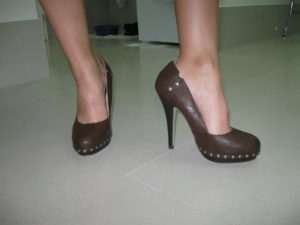 Every greeting starts with a buenos dias (good morning), buenas tardes (good afternoon or evening), or buenas noches (good night).  This is fine and dandy, but sometimes adds to my anxiety of beginning a conversation, entering a store, or asking for directions.  In addition to figuring out how to say what I want to say, I need to quickly determine what time it is.  Who pays attention to that anyway?  Usually I wait for the other person to greet me and copy them, or just say buenas and mumble the rest.

They pay for things differently

This is not one of my favorite things about Peru.  Usually the purchase of a simple item goes something like this; first you need to tell a sales clerk what you want, they print a receipt which you take to a different counter to pay.  Once you’ve paid, you get a second receipt to return to the first clerk so they can finally give you the item.  That’s how I bought my vacuum cleaner.  Buying a $15 alarm clock at an electronics store was even more complicated.  I told the clerk at the clock counter which one I wanted.  He printed the receipt and sent me to the pay counter where I waited in line and paid.  Then I needed to go to a third counter to retrieve the clock, but when I got there, the clock hadn’t made it from the original counter (which was less than 15 feet away), so I waited for the clerks to figure out the problem.  By the time I was holding the alarm clock in my hands, I could have made one from scratch!  Oy.

How much does this cost?

Unless you purchase an item at a store, or a restaurant with prices on the menu, the cost of most things is debatable.  When I ask how much an item costs, I usually get a ridiculously high number quoted to me (commonly known as the “gringo price”).  From here, I need to barter.  I laugh at the vendor and tell them I’m not an idiot and give them a more reasonable number.  We argue back and forth until we finally arrive at a compromise (which is probably still far more than I should be paying).  I have been given lines about how the exchange rate between Dollars and Nuevo Soles varies depending on what time of day it is or what district of Lima you’re in (not true).  Sometimes the vendor will pull out a calculator and begin quickly performing nonsense calculations, conversions, “discounts” and “taxes” as a part of their argument.

The tactics Charlie has given me to combat this include telling the vendor you will just go to the other guy across the street who is offering a better price, or showing him the money you’re willing to pay and telling him to take it or leave it.  The most common thing Charlie and I barter for is the price of a taxi ride.  The whole process feels uncomfortable and annoying, but is perhaps beneficial to my marriage.  I do believe that the constant bartering Charlie and I need to do throughout the day has drastically reduced the amount of energy either of us are willing to exert into daily bickering with each other.  Since we’ve been down here, I’ve heard nothing about how many pies a month I need to make to be a good wife (a common topic of debate from the past).

Back in the day, Charlie and I used to argue about our opinions on public displays of affection.  When we were at parties I didn’t like how he would either treat me like one of the guys, or ignore me.  I would say to him “Charlie, how are people going to know that we love each other?”  His reply was, “Why do other people need to know we love each other?”  Fine.  He had a point.  PDA is far more common here.  Every time I look around the park in front of my apartment, I notice at least one bench occupied with a couple kissing. If you get a good show, sometimes they’re making out…or even groping!  And not just teenagers, you see this across the ages.  It’s hard not to stare.    Charlie feels it’s insincere. He tells me that the men I see making out on park benches and whispering into their girlfriend’s ear probably have a wife at home or another girlfriend living in a different part of the city.  If you think about that way, it’s a little less endearing.  But for the most part, I think it’s nice to see people expressing their love for one another.  It’s better than fighting.

Speaking of PDA, in Peru (and I think a lot of Latin America) everybody kisses everyone all the time!!!  When you are introduced to someone or meet up with a friend; most familiar greetings and partings are followed by a kiss on the cheek.  I kiss Gaby, I kiss this girl I keep seeing in the park (we talk while our dogs play together), I kiss Charlie’s boss, and I kiss Carlos, our driver.  It’s great!  Again, Charlie and I differ in our opinions of this. Charlie feels like the affection is not always genuine.  He points out that as a social obligation, you are forced to show affection to people you don’t know or don’t like.  Maybe it’s the “rubia puta” in me, but I love kissing everyone!  Oh well, different  strokes, different folks.

If I keep walking around in workout clothes and flip flops, I’ll never fit in.  In the business district of San Isidro, Lima, where I live, people dress quite nicely.  Maybe this is a city thing as much as a Lima thing, nonetheless I feel the need to adapt.  Since my hair color, skin color and accent don’t help me, I figured if I start dressing the part, it might make me look more Peruvian.  So I went to a clothing boutique near my house and told the sales clerks I was looking for some nice pants.  By nice, I was thinking anything other than workout pants or baggy jeans.

They chose several pairs for me to try on.  The first two pairs I couldn’t get up over my thighs. By the third pair, basic black, slim hip huggers, the three sales clerks were determined.  As we faced the mirror, one stood behind me and gave instructions to hold my breath while the other two tugged the pants over my butt. Then each pulled in towards the middle until the button met the button hole to seal the deal.  Sucking in my gut as far as I could, they were able to pull the zipper up.  They all stepped back triumphantly and watched and waited for my opinion as I reluctantly studied the new look in the mirror.

Presenting it as a question, I suggested that maybe, just maybe the pants were one size too small.  The girls looked at me like I was crazy and told me to look at the fit of their pants, which, sure enough, fit just as tight if not tighter than mine. “Okay,” I thought to myself “when in Rome…” While I was talking myself into the purchase and trying to figure out how I would get the pants off, a sales clerk brought out a pair of four-inch stilettos.  Standing in them with ankles wobbling (I’ve never been very sturdy on my feet), she explained that this would make the pants the perfect height.  I purchased the pants and two nights later went shopping with Gaby to buy two pairs of stilettos: one three-inch, one four-inch.  I’ve been practicing wearing them, but keep a pair of flip flops in my purse when I go out in case I need to do any significant walking.  I must admit, the outfit is flattering.  No wonder everyone I greet wants to kiss me!

21 thoughts on “Kissing in Peru”