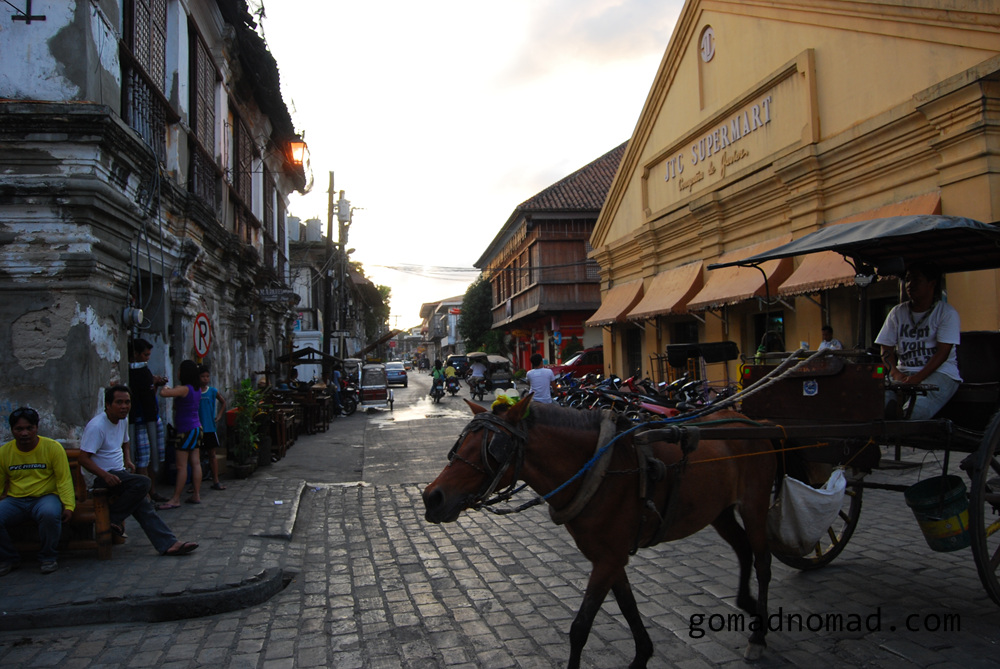 If you ever find that you feel like you’ve just stepped out of the modern concrete jungle and into a street paved with cobblestone and flanked by 16th century-inspired Spanish houses, then, nomad, you’ve found yourself in Vigan, Philippines.

This town is the most extensively preserved town in the Philippines. It is untouched by the modernization that has flourished everywhere else, and it holds a distinct brand of romance that you can only find in places where the walls themselves have their own stories to tell.

Vigan is filled with 16th-century structures, along with those Spanish-era street lamps. and even down to the use of horse-drawn carriages called “Kalesas.”

During the 16th-century, Vigan was a vital coastal trading post that catered to both Spanish and Chinese traders. It was the trade center for the northern regions in the Philippines and as such, was one of the most developed of its time.

Today, this charming city sticks to its roots. Walking around Calle Crisologo feels like visiting an era long gone. The town is filled with art. Everything about it is art. Everything from the historical paintings and sculptures from the Philippine’s most affluent artists, to the age-old art of pottery.

Hotel Luna is a 4.5-star hotel in Calle Crisologo that showcases the perfect marriage between modernism and 16th-century art. The hotel has all the amenities that you would expect from a modern hotel, with the added bonus of various historical works of art displayed within. It is highly recommended as a place to stay during your visit to Vigan — the art displayed within the hotel is more than enough to justify the price of accommodation.

This humble town is the perfect illustration of what a 16th-century colonial town was intended to be. The town is the result of the convergence of two cultures — Asian and European — that created a magnificent display of architecture and culture.

Apart from the art and the architecture, Vigan is also home to some of the best Ilocano food that there is to offer.

Bagnet, or deep fried pork belly, is one of the best foods to try while in Vigan. It’s crispy, it’s succulent and very juicy on the inside. It’s best served with the locally-made vinegar and a cup of rice.

Empanada is a favorite snack in the area. It’s ground pork or beef, egg, and vegetables wrapped in a batter and deep-fried to perfection. Like bagnet, the empanada is also best eaten with the locally-made vinegar.

Apart from Calle Crisologo, Vigan is also home to other historical places such as the Bantay Church Bell Tower, a tower which was built in 1591 that also served as the perfect vantage point for someone tasked with the protection of Vigan and Bantay.

The Syquia Mansion was the home of the 6th President of the Philippines, Elpidio Quirino. This home was preserved so well that it still holds much of its former glory. The house is the perfect example of what a politician’s home was in the 16th-century.

Vigan is one of the few places to retain its aesthetic. Walking through its streets literally means you’re walking on a piece of history. The cobblestones are much older than you are and that speaks a lot about its age. So, if you ever want to get away from the realities of the modern world, Vigan is definitely the place to be.