As a child riding in the back seat on the interstate to my grandparents’ house in upstate New York, I looked to my father to pop in the cassette. Be it Willie Nelson or Arlo Guthrie singing, the words of Steve Goodman’s classic folk song, “The City of New Orleans,” summed up the essence of America to me. 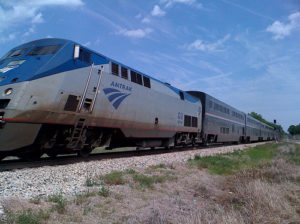 Twenty years later, I’m living out my childhood dream of riding this magic carpet made of steel through America’s backyard. I’ve come to see if it’s as romantic as those poetic lyrics ingrained in my imagination suggested it would be.

The historic train line, that only since 1971 has been operated by Amtrak, shuttles passengers 19 ½ hours between Chicago and New Orleans. Instead of going the traditional way, I thought I would ride from already balmy Louisiana, north to the still-wintry Windy City, and follow the lyrics in reverse.

We leave the Big Easy at 1:45 p.m., with plenty of time to sleep off the previous night’s party on Bourbon Street capped off with spontaneous street jazz and a café au lait and beignets at the 24-hour Café Du Monde.

As we roll, the rich swamps on the edge of Lake Pontchartrain slowly give way to the forests and fields of Mississippi. From the slow-moving train, I manage to catch a glimpse of a sunning alligator, a couple of turtles and an egret taking flight. By evening, we pull into Memphis, too dark to witness the intimidation of the mighty Mississippi River. I stop to enjoy a couple of days here.

I indulge in the cliché of a pilgrimage to Graceland. And to complete the unrivaled Memphian experience, I see live blues on Beale Street after sinking my teeth into a pulled-pork sandwich at Central BBQ. Back on The City of New Orleans, we push through the night, and by morning we’re in Chicago. The cold spring wind stuns me as I step off the platform at Union Station. But

I’m comforted in knowing I won’t have a moment of boredom in this urban center of world-class architecture, cuisine and sports. Though I enjoyed my journey through the backbone of America, it wasn’t completely agreeable. The dilapidated rural houses and decaying cities of the Deep South reminded me that my country still has to pull its long-neglected people out of poverty. The unofficial segregation and racism that continue to plague our nation were even more troubling to this naive middle-class Northerner.

I’m not sure if The City of New Orleans was as romantic as the folk-song images in my boyhood mind. But there is something special about this train and its magical journey, complete with the passengers, sites and sounds to make a good, old-fashioned adventure through the heart of our country. One thing is for sure: If you’re looking to find the real America, you need not search any further than the people and places along this steel rail that still ain’t heard the news.

2 thoughts on “Riding on The City of New Orleans”