Liverpool played a major part in the African slave trade, serving as one of the angles in the triangle. Tropical goods such as sugar, indigo, and cotton would arrive in Liverpool and much of its 18th century prosperity was a result of the slave trade. 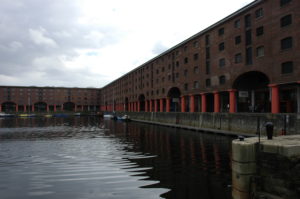 Liverpool has been designated a 2008 European capital of culture. This gives the city a chance to showcase its cultural life and development. But on March 31st it was looking more like the European capital of construction. It seems like a quarter of the downtown is closed and under cranes.

The maritime museum had a floor dedicated to the slave trade and another just on the city’s history. Here I learned why the Liverpool dialect is so different compared with any other in England. The reason: thousands of Irish settled in Liverpool during the potato famine.

Even though the UK is one of the most expensive places to travel, the museums all have free entry. That afternoon I also checked out the Liverpool Tate.