“Amsterdam is the greatest city in the world.”

With such a recommendation we knew we couldn’t go wrong. We felt we had to break up the trip from Paris to Berlin by stopping in Amsterdam for a couple nights. Our drivers on the way up all had great things to say about the city, they told us about the abundance of just about everything one needs for a good night out. Our main concern to begin with was accommodation. Hostels are ridiculously expensive, couchsurfers are booked weeks in advance during the summer, and parks are few and far between in downtown Amsterdam. 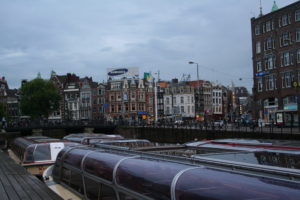 Our last driver dropped us off in the center, a short walk from the famous red light district and pointed us towards Zeedijk where a cafe hosts the weekly couchsurfing meet up. We were thinking about fishing for hosts in a last desperate attempt to find someplace warm and civilized to sleep or at least drop some of our luggage.

It’s only when we reached the cafe where the local couchsurfers were meeting that we realized that this was not our scene for tonight. Our budget did not allow us to drink in such an establishment and we felt that hanging around awkwardly with empty hands and backpacks lurking for a couch was not the best way to spend our evening. We decided that we could spend our first night on the rough even though camping in cities is not high on our lists of favorite pastimes.

We wandered the streets of the red light district amazed and shocked at the atmosphere: the drug culture, the prostitution, the flaming gayness were pushed to the extreme and turned into a circus tightly packed in the narrow streets and canals.

After losing ourselves in the maze of this onion shaped city we found a grocery store and stocked up on the staples of the homeless travelers’ diet: beans, lentils, chickpeas, corn. All canned of course. This is in my opinion the cheapest and most efficient way of eating something other than cheese sandwiches while on the road. A little bit of curry powder and some Tabasco for flavor and you have yourself a nice salad. Sadly beer is disappointingly lousy in Amsterdam. Despite housing the Heineken and Hollandia breweries, the Netherlands rank very low as a beer country in comparison to their neighbours. So equipped with a pair of Atlas 8.5% beers and a wide variety of beans we set out for more exploring.

With no place to sleep and no park within walking distance, two tired and lazy travelers with bags but no maps, crashed on the edge of a canal. We enjoyed the night and the quiet of the very posh neighborhood we found ourselves in. We started dozing off under the stars, still undisturbed by the rapidly sinking temperature.

I awoke to the sound of a small boat stopping near us. We watched a man get off and say goodbye to the friend that had just taken him home. The hitcher reflex in me came out and made me ask the boater where he was heading. I didn’t really care about his destination; I was more interested in seeing if we could tag along. The boater answered in a thick English accent “Ya wanna go for a tour?”

We climbed down into the boat with our bags. The boat was very simple: a long thin wooden boat with a small engine attached to the end of it. We moved slowly through the canals to keep the noise down. We drifted through canal after canal, in a direction that was very unclear to us, past streets lined with small private boats and through entire blocks of boat houses lined up one after the other.

Some were built like very comfortable boats others just look like floating trailers, boxy wooden structures that seem unfit for anything rougher that a canal or a pond. It was past midnight and all the tourist boats were done sailing for the day so we could comfortably float down the middle of the waterway and enjoy discovering the city from a unique angle, looking up at everything. People, bicycles, buildings all towered above us in the night.

Our guide was amazed by our luck even though he had everything to do with making this happen. Still he kept repeating, “You are fucking lucky, first time in town and you get a free tour of the canals, fuck me!”

He looked like he was in his thirties and claimed to be some kind of sound engineer who worked out of his house in the very calm and pleasant Jordaan district. He used his boat for his everyday transportation and seemed to be enjoying this quiet late night cruise just about as much as we did albeit without the element of surprise and novelty that made it so special to us.

“Here, you are right in the middle of town,” he said when he dropped us off. This meant nothing to us since we used only the tram stop maps for direction and hadn’t seen one in a while. The neighborhood was nice and as we walked through it we felt more and more like stopping to get a couple hours of sleep.

We found a long narrow street, weakly lit, very quiet and full of trees and potted plants that we hoped would hide us from most late night walkers. We felt far away from the craziness of the red light district, far enough that we wouldn’t be disturbed by late night drunks. Determined to sleep through the coldest hours without unpacking and pulling out the sleeping bags we put down our bags as pillows, put on as many layers as we could and did our best to get comfortable next to a building, hidden on each end by small trees and potted plants.

As Murphy’s Law would have it this quiet street got a lot busier as soon as we shut our eyes, and of course, as soon as we stopped moving the cold hit us and made it hard to find sleep.

Despite this we managed a couple hours of rest before going for a walk to find a park in time for sunrise. The sun was only minutes away from clearing the buildings and trees when we reached Oostpark and settled on a patch of grass by a pond. Finally we were warm and comfortable so we shut our eyes and dozed off.

In a sudden move I turned around and jumped to my feet. Facing me, his hands still on my bag, was a tiny drunk man. His ridiculously small size and the strong stench of alcohol on his breath were the first two clues indicating that I shouldn’t be too scared of him. After shouting at him a couple times and looking at his hands and pockets for signs of our belongings I realized that I had woken up before he had any chance at taking anything. This was followed by a couple minutes of mind games where he would try to show strength, then beg for money, then emphasize that he was Dutch. After that he would try to convince me that he was an honest man and was not in the middle of opening someone else’s bags when I surprised him.

At one point he took insult at a sound that the nearby swans made and charged them and until the last second it looked as if he was going to throw himself off balance and into the water but it was his lucky day and he stayed dry. I had been seriously considering throwing him in to get rid of him until I decided it would be less entertaining but more efficient to just walk away. At this point he went from begging for one Euro to demanding five Euro and in a final act of drunkenness he sent himself spinning a couple times before jumping up in the air and spitting in my direction. Luckily he was seriously dehydrated from a night of drinking and I walked away almost unsoiled. As we walked away we watched him pick an argument with someone much taller and stronger than myself. But the spot we had chosen was too good to give up so we walked for a couple minutes and returned once we were sure that our drunk friend was far away.

Now at seven in the morning, enjoying the first rays of a beautiful summer day we dozed off and got the rest we had been looking for all night. We slept in, and watched the park fill up as it was now Saturday and the weekend crowds were out. At the water fountain we took care of basic hygiene which always gets a funny reaction from bystanders. Brushing your teeth is a very normal thing until you do it in front of everyone and suddenly their reaction makes you feel completely naked in public.

We spent our Saturday afternoon wandering around the city some more. We couldn’t afford the Van Gogh museum and our big bags barred us from seeing Anne Frank’s house. After getting a little bit of internet in a Bagel and Beans coffee shop (which is one of the few to offer free wifi) we chose to spend the night outside Amsterdam in a small town on the way to Germany.

Muiden, pronounced mooden or mawden or mweeden or however you want to because unless you’re a native speaker you’ll never get it right, is an old town stuck in between the water and the highway and crossed by many canals. With an old castle, two cafes by the water locks and a marina it’s a quiet bourgeois town with a steady trickle of tourists and very occasionally a couple of backpackers walking through to the small beach by the marina to spend the night.

The beach is a small patch of sand, no more than 100 feet wide but there is grass to pitch a tent on and the view is beautiful. To the left, across the water you can see the lights of Amsterdam lighting up the night sky and at if you stand on the top of the ancient dirt dyke you can see the castle sitting above everything else in the town, beautifully lit up against the summer sky. The layout is such that you can watch the sun set and rise from the same point and once the sun is up and you’ve enjoyed a little rinse off in the water, you are just a fifteen minute walk away from the highway from where you can catch a bus to Amsterdam (which takes twenty minutes and costs a little more than two Euro). Or if you’ve seen enough of Amsterdam you can hitch in the opposite direction, where a gas station (Tankshoone) is conveniently located a couple kilometers down the road. The highway will take you straight east to the rest of the Netherlands or Germany.