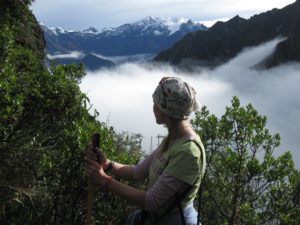 In the summer of 2005 I hiked Mt. Washington with my uncle Flip and lifelong friend Pat as part of my goal to summit all 48 of New Hampshire’s 4,000 footers.  At an elevation of 6,288 feet above sea level, Mt. Washington is the highest in the White Mountains and home of the world’s most severe and rapidly changing weather.  To this day it still holds the highest recorded wind reading: 231 mph at the weather observatory in 1934.

The hike was challenging and the weather was less than desirable.  It was foggy and wet with a light rain and sleet at times.  When we reached the summit, it even snowed…in July!  Cold and wet, we went into the lodge/observatory to warm up and eat our sandwiches.  I noticed women and men in clean dry clothes and “adventure” hats ordering french fries and hamburgers from the cafeteria.  They had taken the train to the summit.  “Jerks,” I muttered to myself.  I couldn’t help but feel disappointed having reached the summit without a grandiose view from the highest of all of my peaks.

Hoping to silently wallow in my disappointment, I hiked ahead of Pat and Flip as we began our decent.  After several minutes, I noticed that the precipitation had stopped, although there was still heavy cloud cover and plenty of fog.  I continued to hike, thinking about how I wished I had picked another day, or maybe left earlier in the morning, or not had such expectations for a view.  This peak is only out of the clouds an average of 65 days a year. What made me think I was worthy?  The faster I walked, the more quickly the negative thoughts left me and my focus fell to the rhythm of my step. The moist air blowing chaotically all around me…breathing it in and out as I hiked.

Then for a second, a spot in the clouds cleared away for a precious glimpse of blue sky.  But with another gust of wind, it was gone and I was back in the thick fog.  I kept hiking, all the while anticipating these moments of clarity and feeling charged by them.  Each whisp of air toyed with my vulnerable emotions.  Woosh! A second of blue sky…encouragement!  Clarity!  Swish.  Back in the fog.  Disappointment.  Regret.  Woosh! A view of a small peak in the distance!  I was here for a reason!  Swish.  Back in the fog.  How many miles did I have left to hike?

As I continued down the North Ridge, the windows of clear views became more frequent.  I stopped to catch my breath and looked around.  I saw Pat and Flip (the two most positive people in the world) a ways back having a friendly conversation as they descended.  I turned and looked down into the open space below me, The Great Gulf of Wilderness, noticing it was clear of fog.  I took a deep breath in and as I exhaled a gust of wind came up from this valley and blew all of the clouds behind me.  I could see everything clearly!  Mountains, valleys, ridges and blue sky!  A brief moment in time I will never forget.

When I arrived in Peru, I had very little grasp of the Spanish language.  I relied on Charlie for every important task that required a conversation.  I could pick out words in conversations, and accomplish simple tasks such as trips to the grocery store.  It was exhausting and discouraging and at this moment I still have bad days or exhausting days where I feel like I am completely in a fog.  But over the past month, I’ve started to notice moments of clarity…A successful conversation with a friend in the park.  She tells me about her wedding and I understand her!  A glimpse!  Then she tells me about her husband’s work and while I pretend to understand, she’s speaking too fast and the words blur together.  Whoosh.  She lost me.  I’m back in the clouds.  Swish!  My girlfriends come over for cocktails and girl talk, the whole night almost completely in Spanish!  I can talk about “Chaka Chaka” in Spanish!  Who knew?  Clarity!  Swoosh.  I try to ask a question about a Peruvian celebrity to a woman in the grocery isle and she can’t understand me.  I try again, but it’s her turn to pay and she walks away quickly.  Puff.  I’m alone in the fog.

I attend Spanish class five days a week for two hours a day.  I study for at least two hours a day and practice with my friends.  I speak Spanish to Brandy and watch Spanish TV.  I use my Spanish cookbook and look up words I don’t know.  I ask questions (even when I know the answers) just to practice the language.  Like hiking on Mt. Washington, I keep moving forward, allowing myself to get charged and encouraged by the moments of clarity.  I can’t help but look forward to the day when I am fluent in Spanish…when I feel like I’m completely out of the clouds.