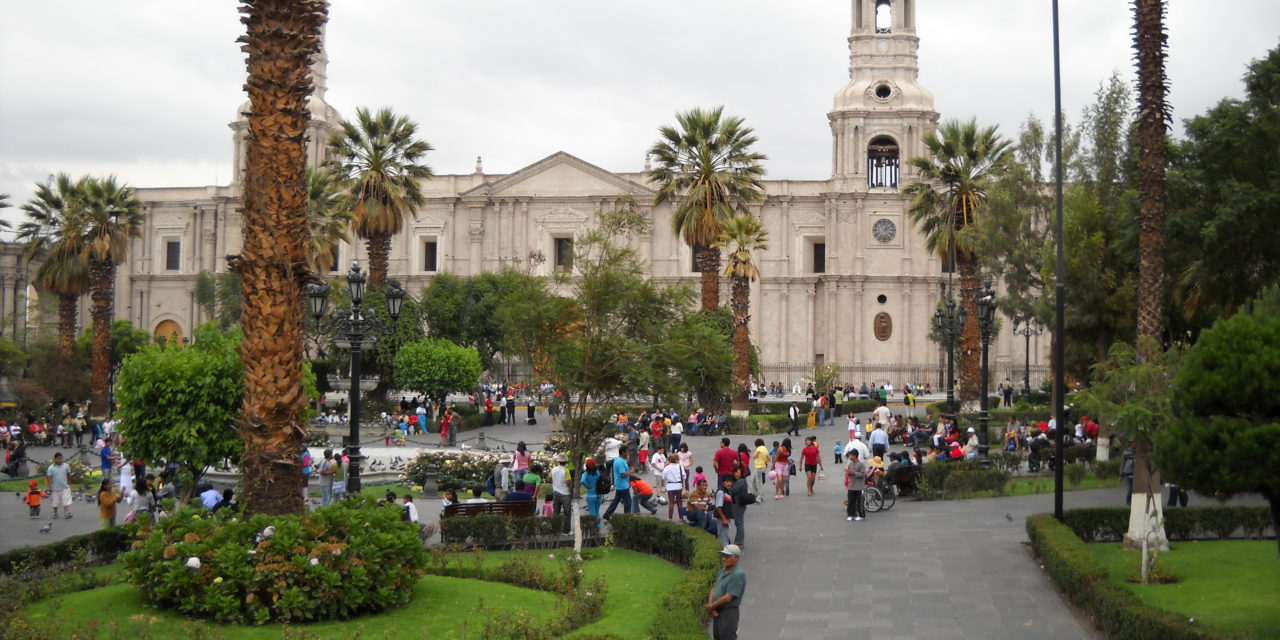 1) The Plaza de Armas in Arequipa.  Arequipa is also known as “the white city” because many of its buildings are made from a white volcanic rock called sillar.  The city rests in the Andes around 7,800 feet above sea level and is the second most populated city in the country (around 904,900 residents) 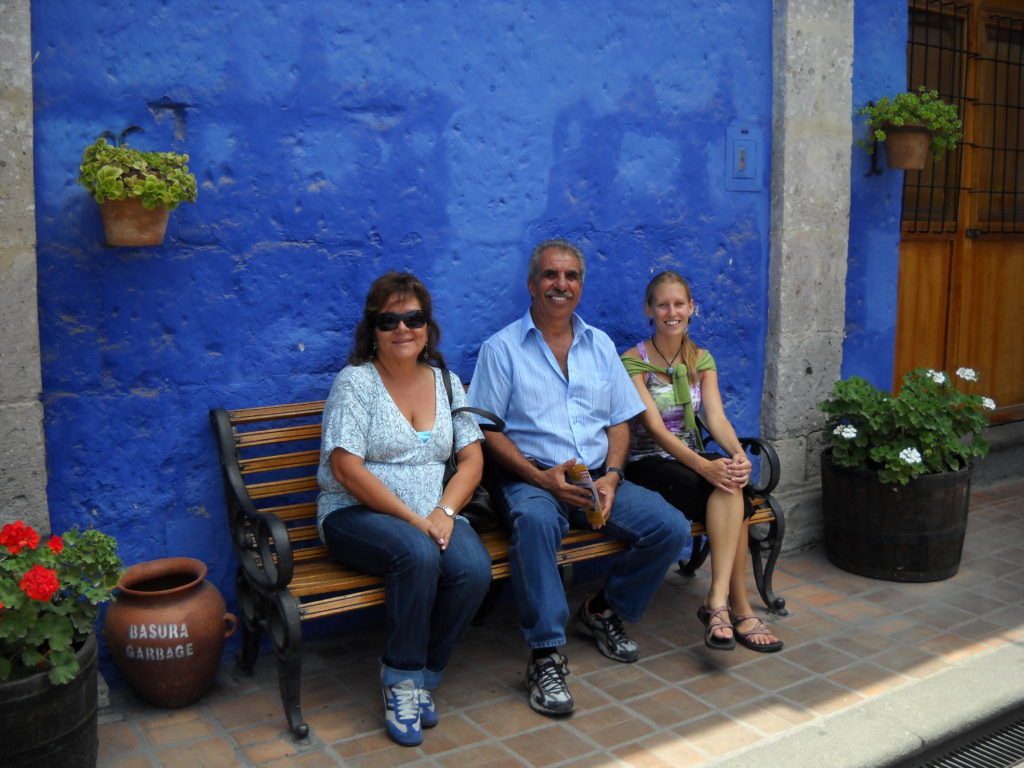 2) Our wonderful hosts; Alberto (who works with Charlie) and Rosa.  Along with letting us stay in their house, they showed us around our first day in Arequipa and Rosa prepared breakfast for us every morning! 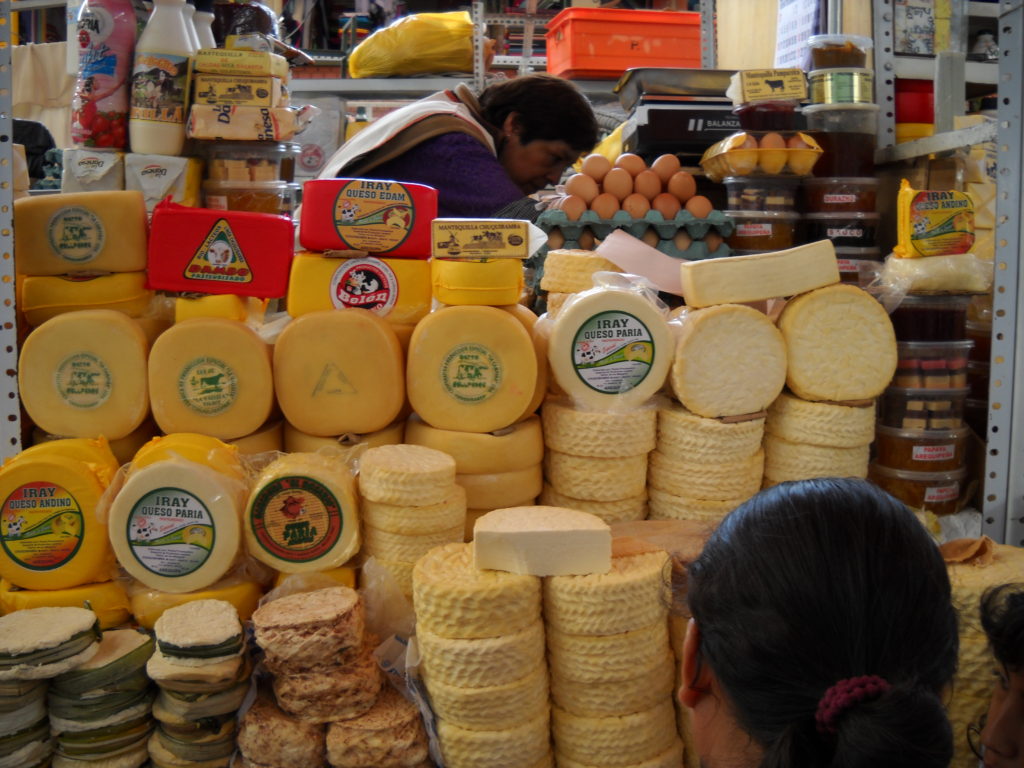 3)  Yummy Arequipena cheese in the market. 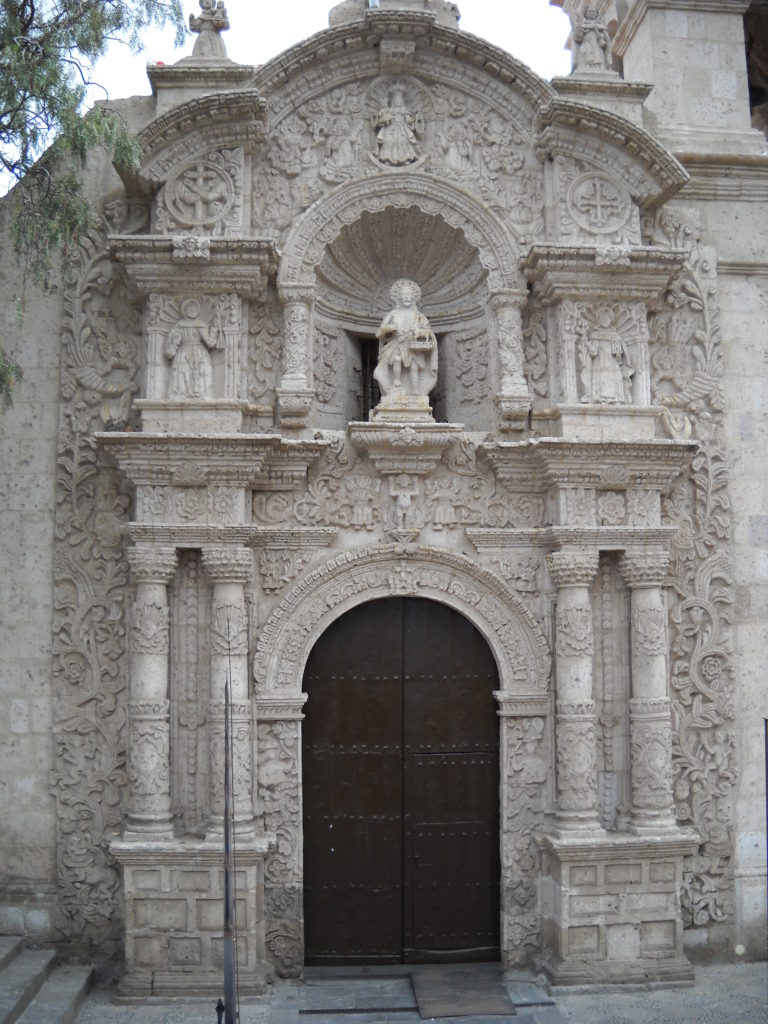 4)  The city is filled with colonial-era Spanish style churches made from sillar. 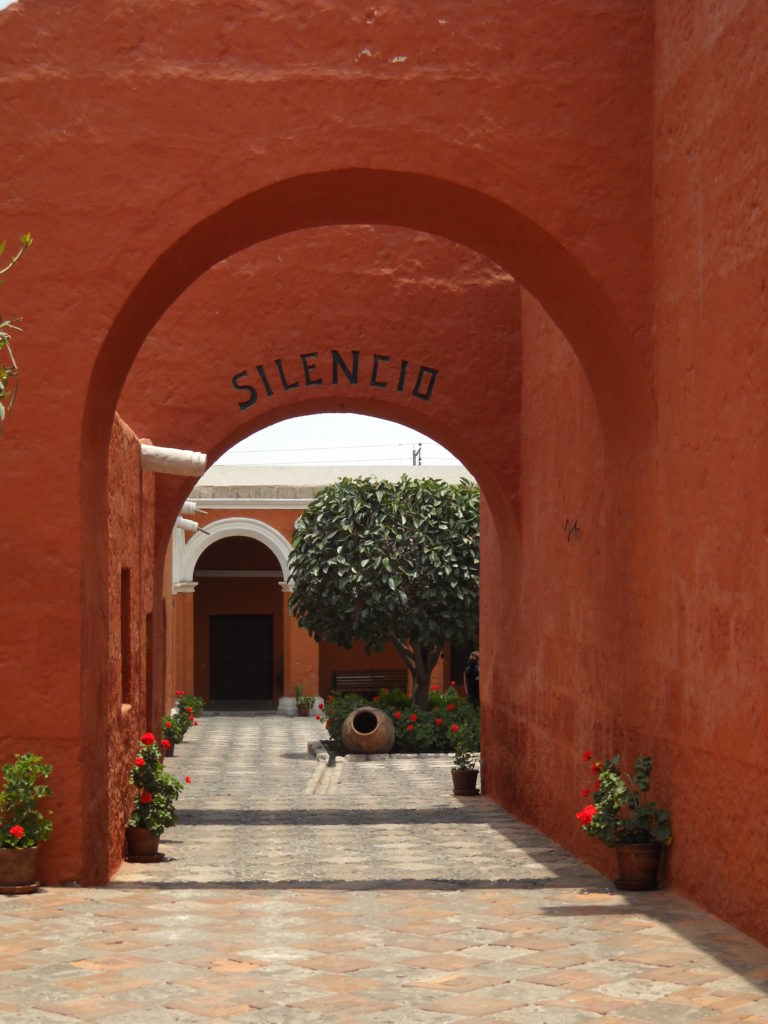 4)  We visited El Monasterio Santa Catalena.  A photographer’s dream, it is enormous and often described as a city within a city.  Founded in 1580, it originally only accepted nuns who came from rich families who could pay a significant dowry.  Although it was traditional for rich, upper class Spanish families to send their second child to serve God in chaste poverty, in this case the nuns each had between one and four slaves and had frequent parties inviting musicians from town.  They lived it up in the style to which they were accustomed.  After 1871, the Pope got word of this and sent a strict nun to whip things into shape.  She fired the slaves (although some stayed on and became nuns), and sent the dowries back to their families.  From this point on, the nuns were not allowed to venture outside the walls of the monastery.  Currently around 30 nuns still live in a newer section where they have no interaction with society outside of the monastery.  To their credit, it didn’t seem all that bad there.  There were lots of beautiful courtyards and the nun’s chambers were spacious and comfortable.  Each nun had their own “cell”  with a bed, a praying area, and its own kitchen. 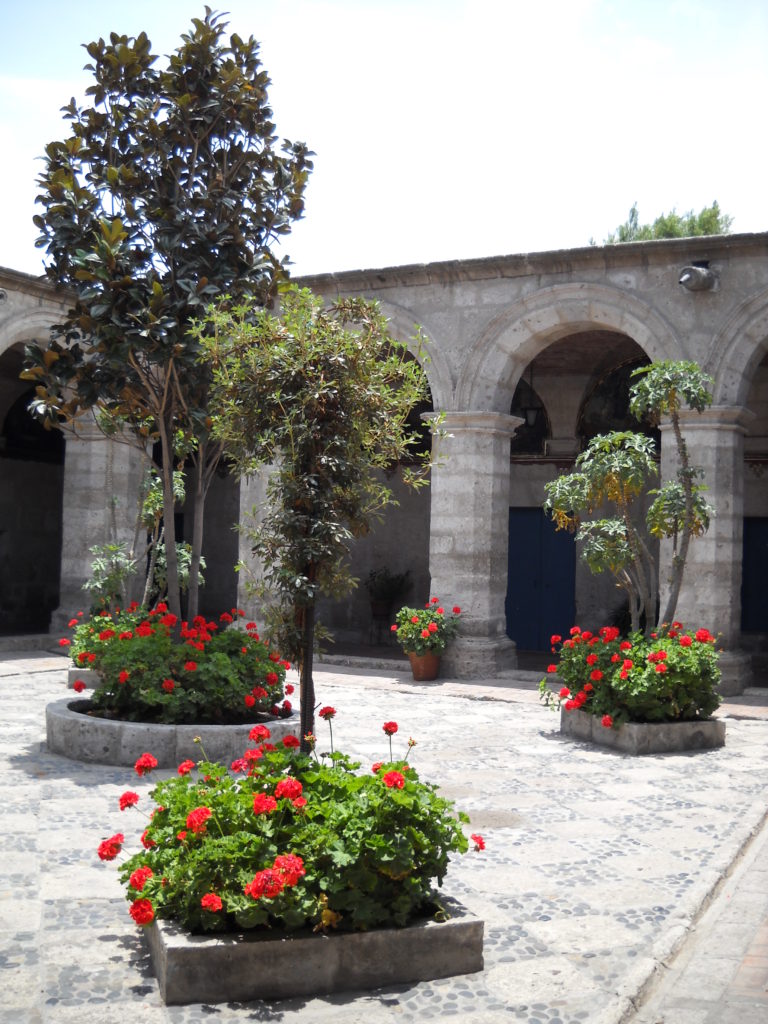 5)  The place is filled with beautiful courtyards and brightly colored flowers. 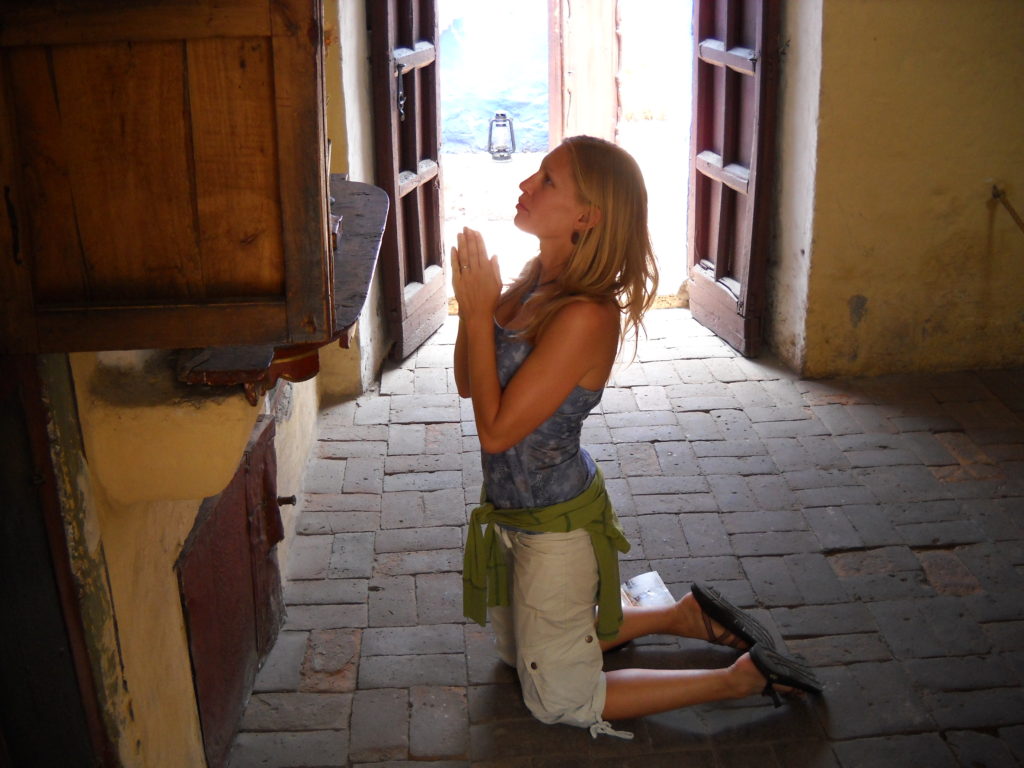 6)  Praying in one of the nuns cells. 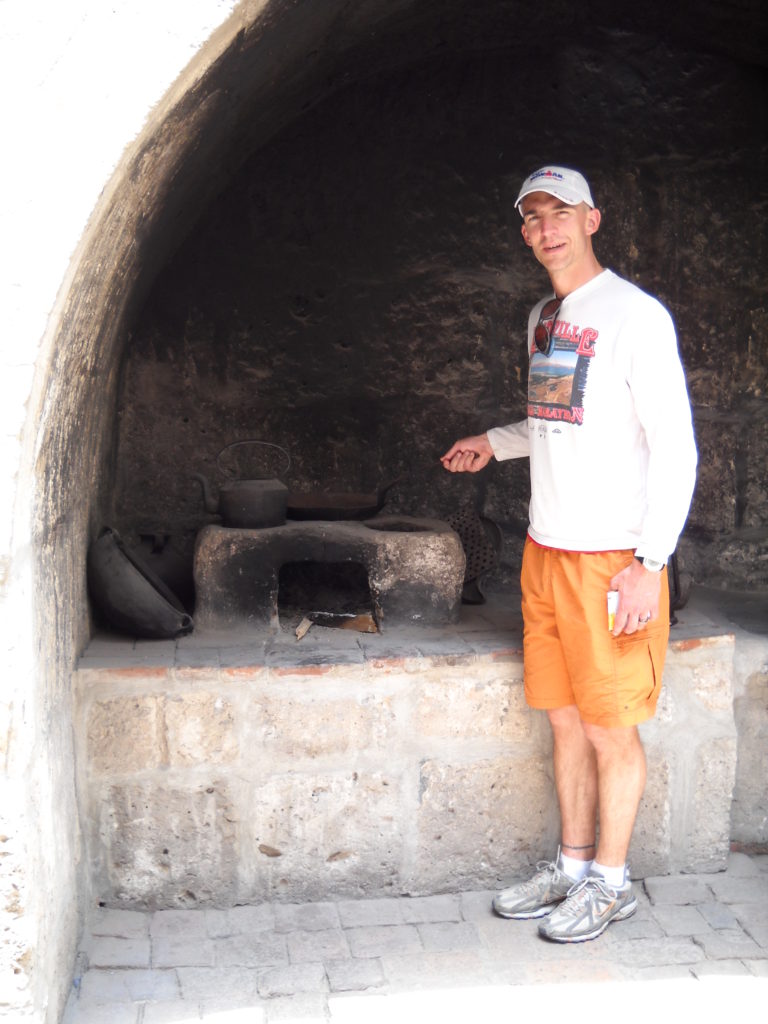 7)  Charlie cooking in one of the nun’s kitchens.  To his credit, I begged him to pose for this picture.  He would not have done it voluntarily. 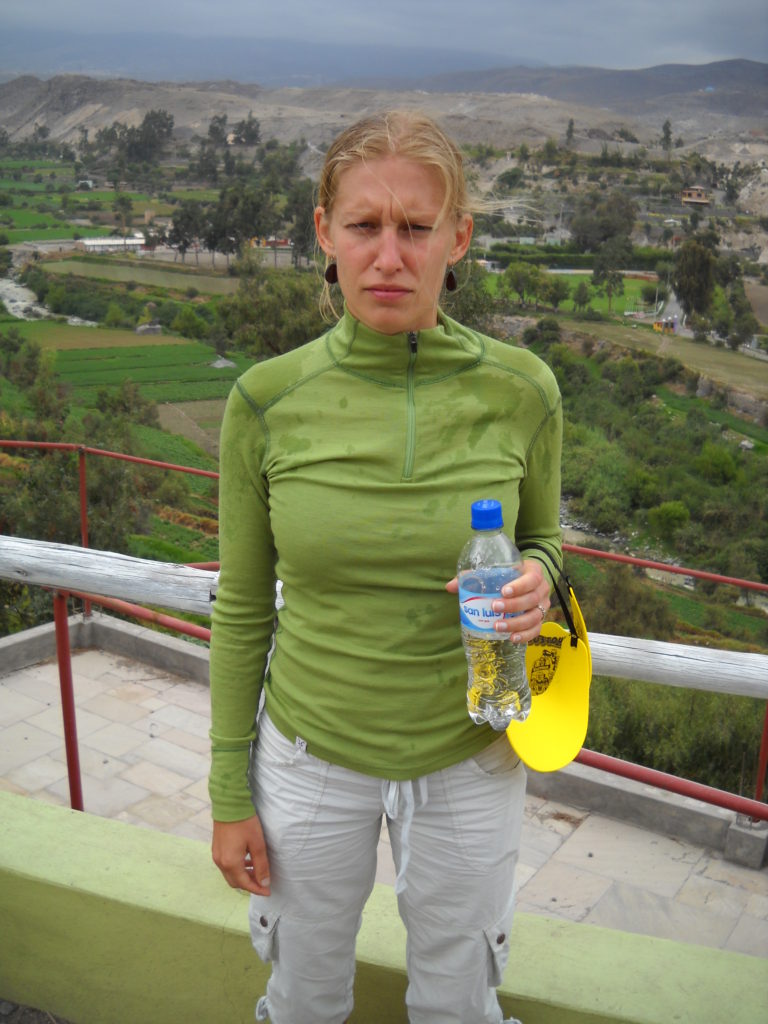 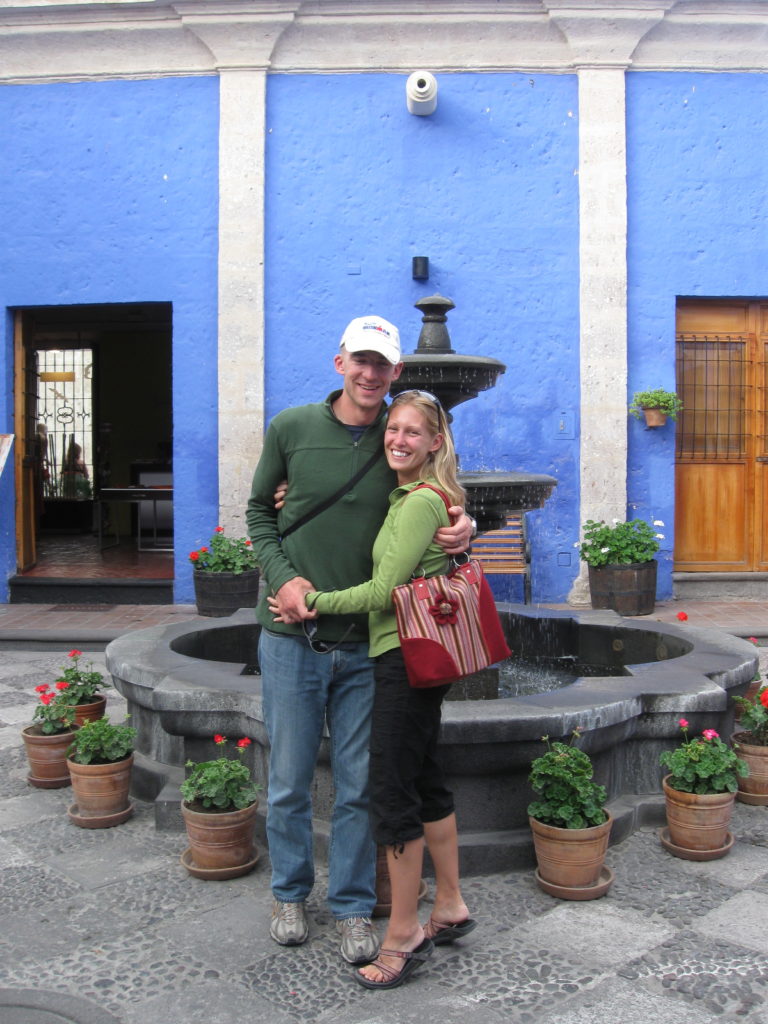 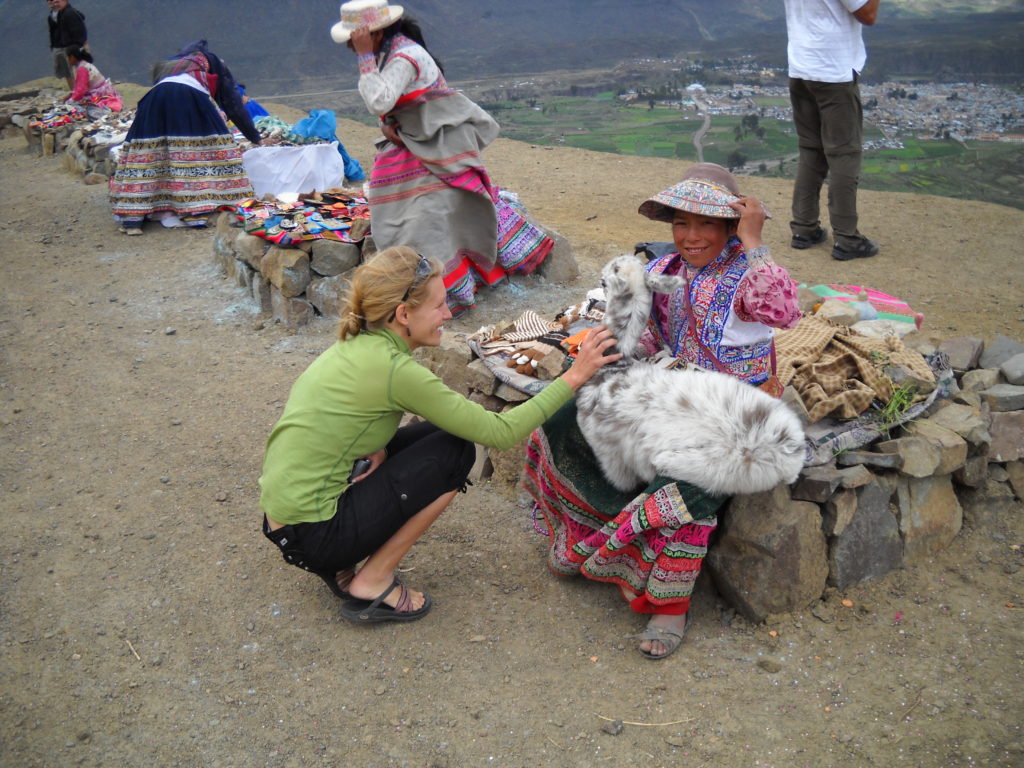 10) We took a four-hour bus ride from Arequipa to our hotel in Colca Canyon.  It made several stops along the way.  A lot of the ladies selling their crafts had baby alpacas with them….a well planned strategy; I was much more likely to buy a sweater from a lady who had a cute baby animal I could pet. 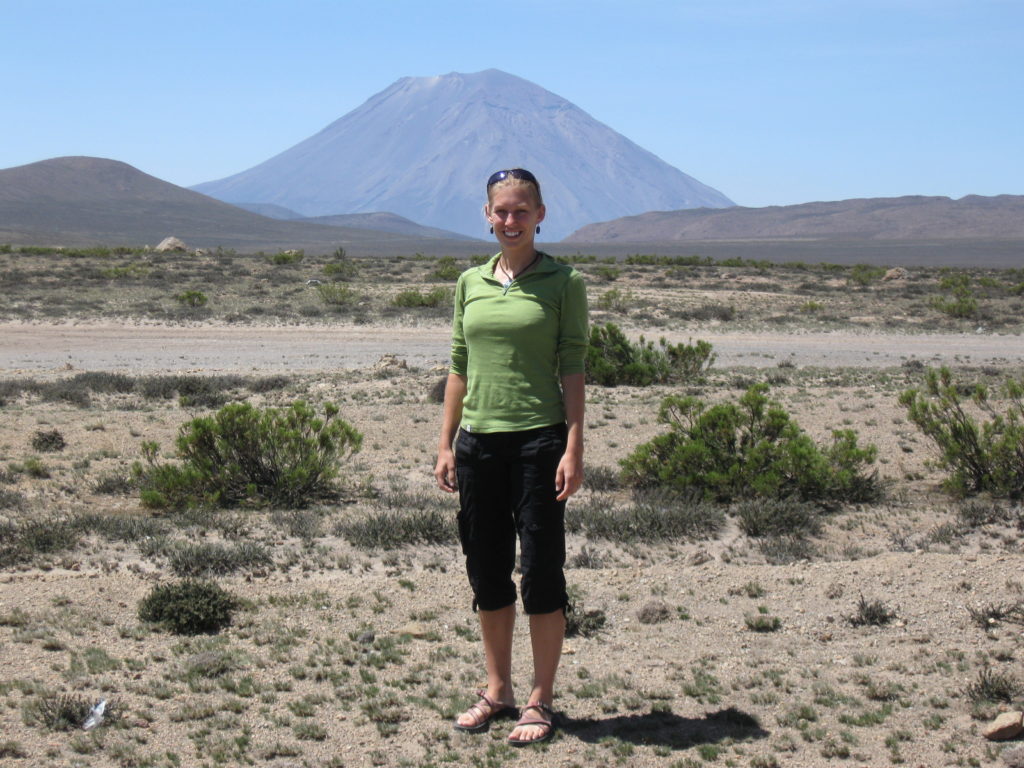 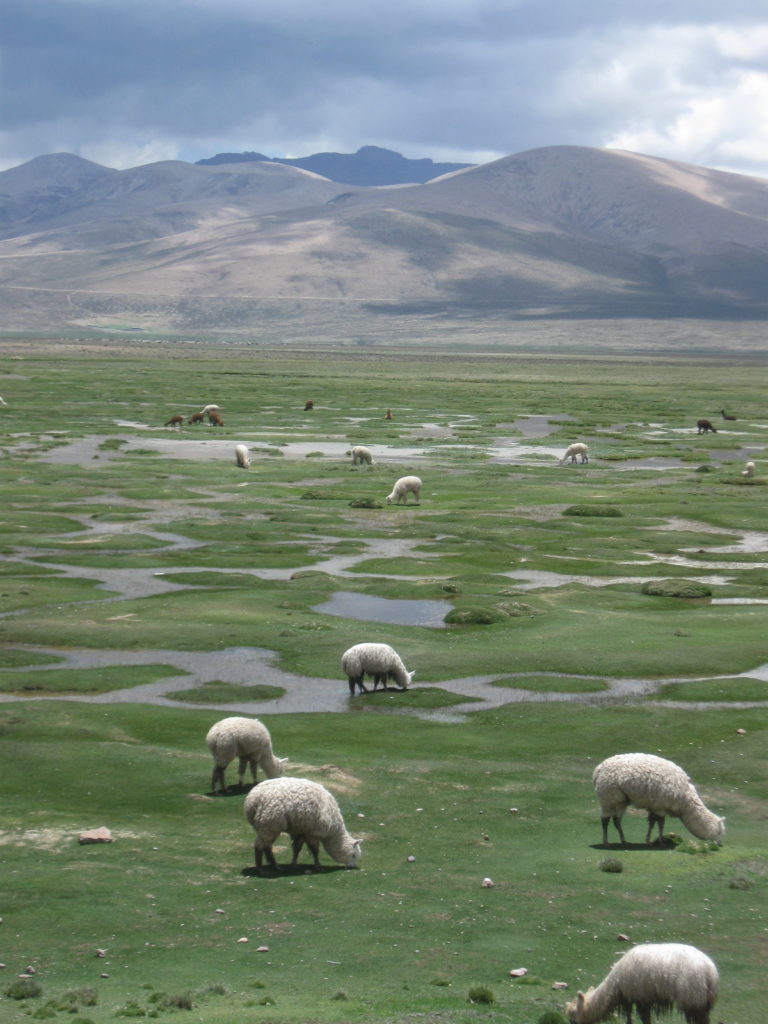 12) Another great view of the mountains with some alpacas grazing in the field. 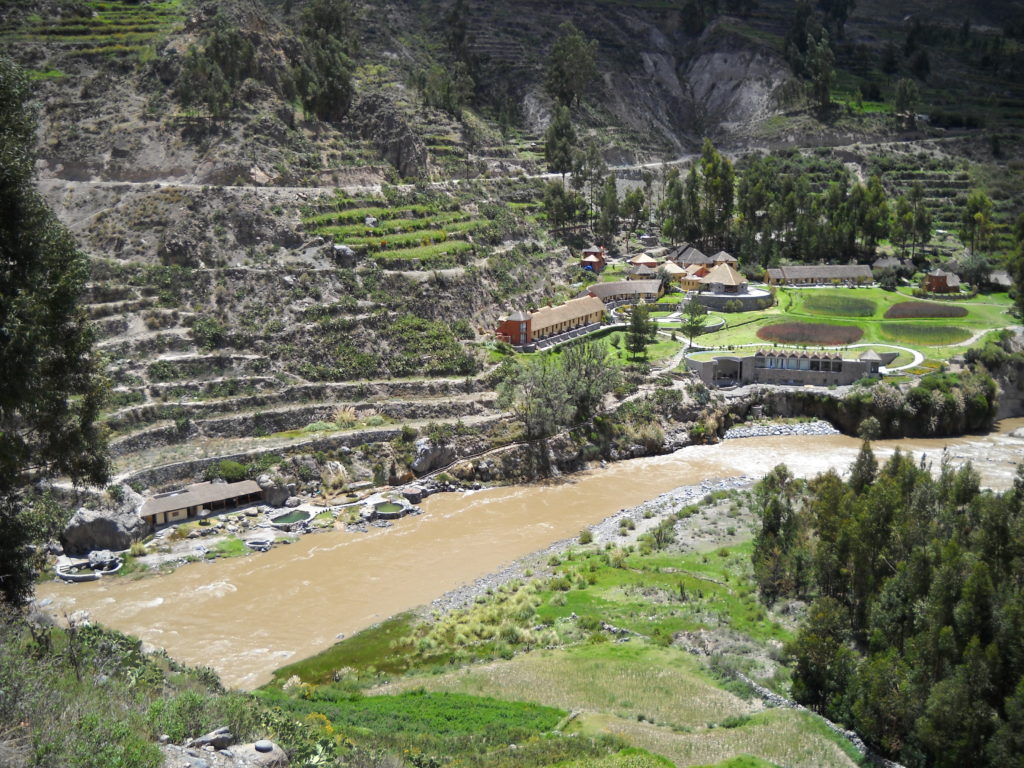 13) View from the road above of the beautiful Colca Lodge and Spa where we stayed in Colca Valley.  Complete with thermal springs, and an incredibly friendly catering staff, this was a wonderful place to stay. 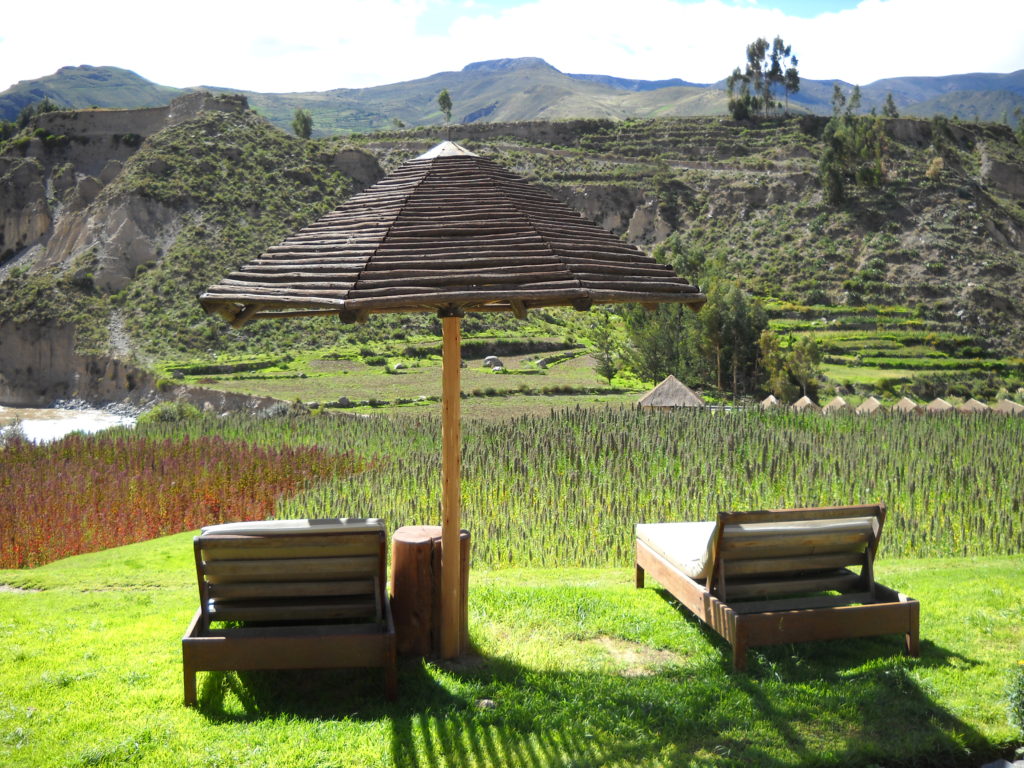 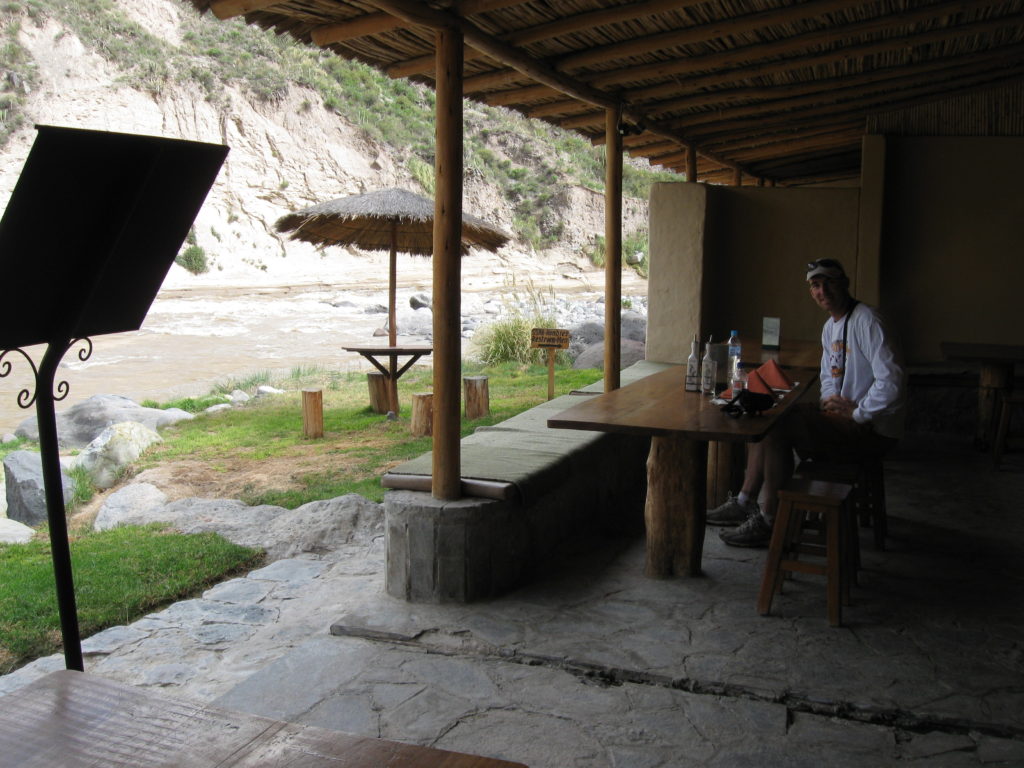 15)  A bbq style lunch was prepared for us each day with three different types of meats of our choice, served to us at riverside. 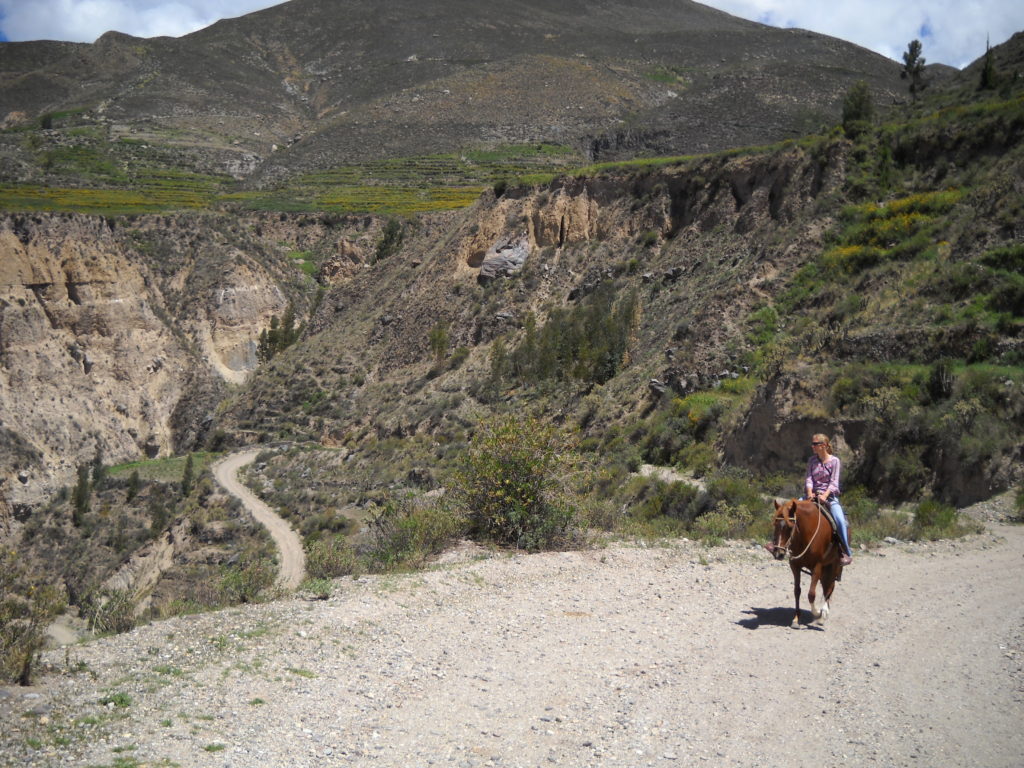 16)  We went horseback riding in the canyon on one of our days there.  Twice as deep as the grand canyon, Colca Canyon is said to be the largest and tallest canyon in the world. 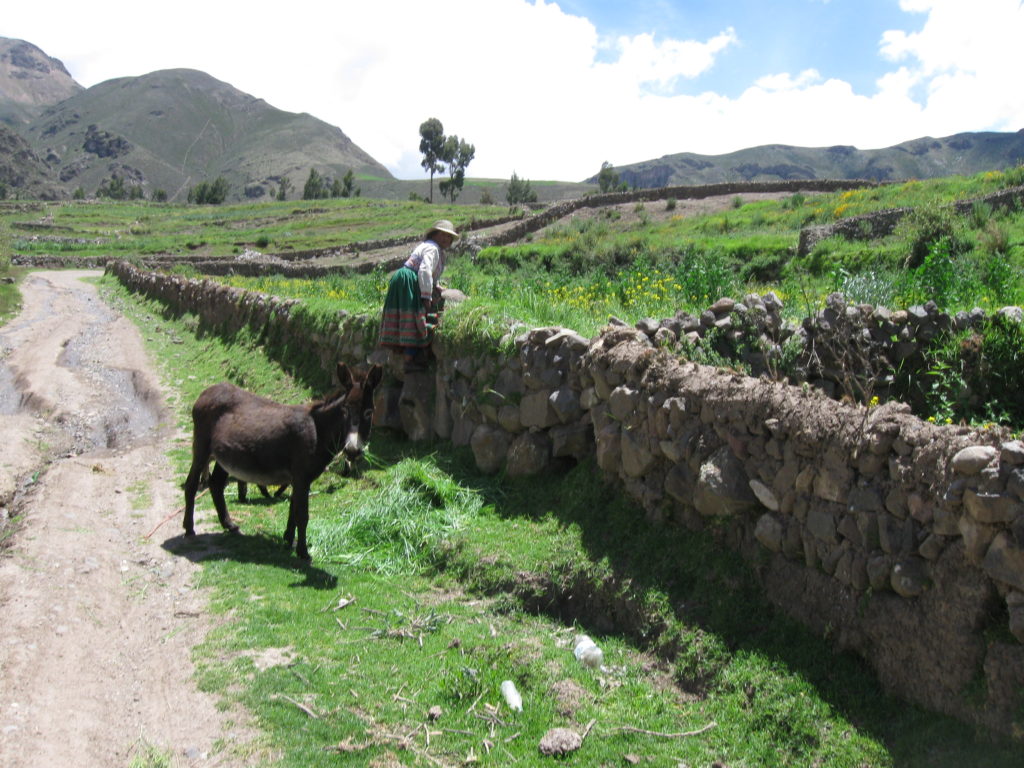 17) A local woman from one of the nearby villages farming with her mule. 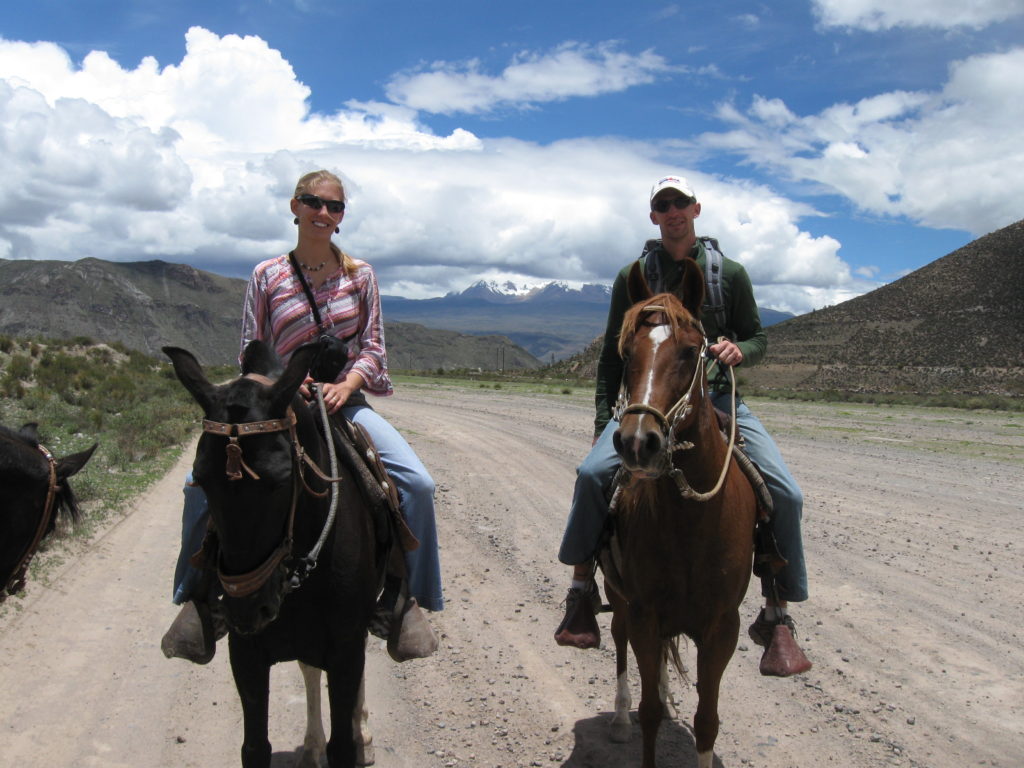 18)  The happy couple and their horses. 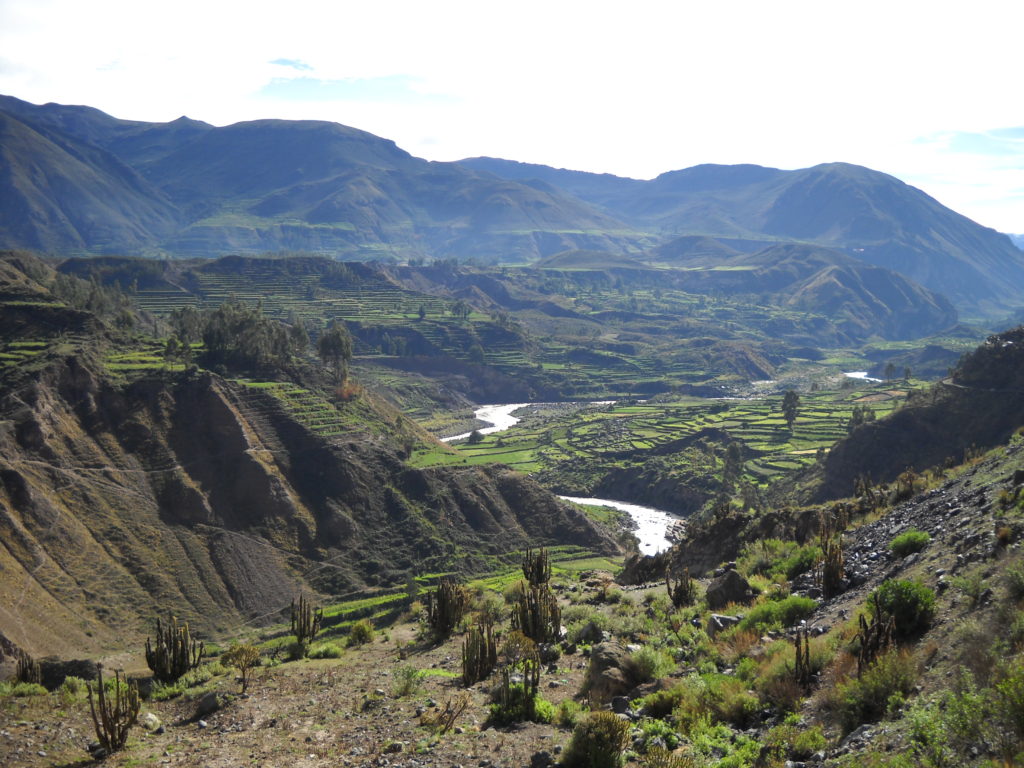 19) Another view of the canyon. 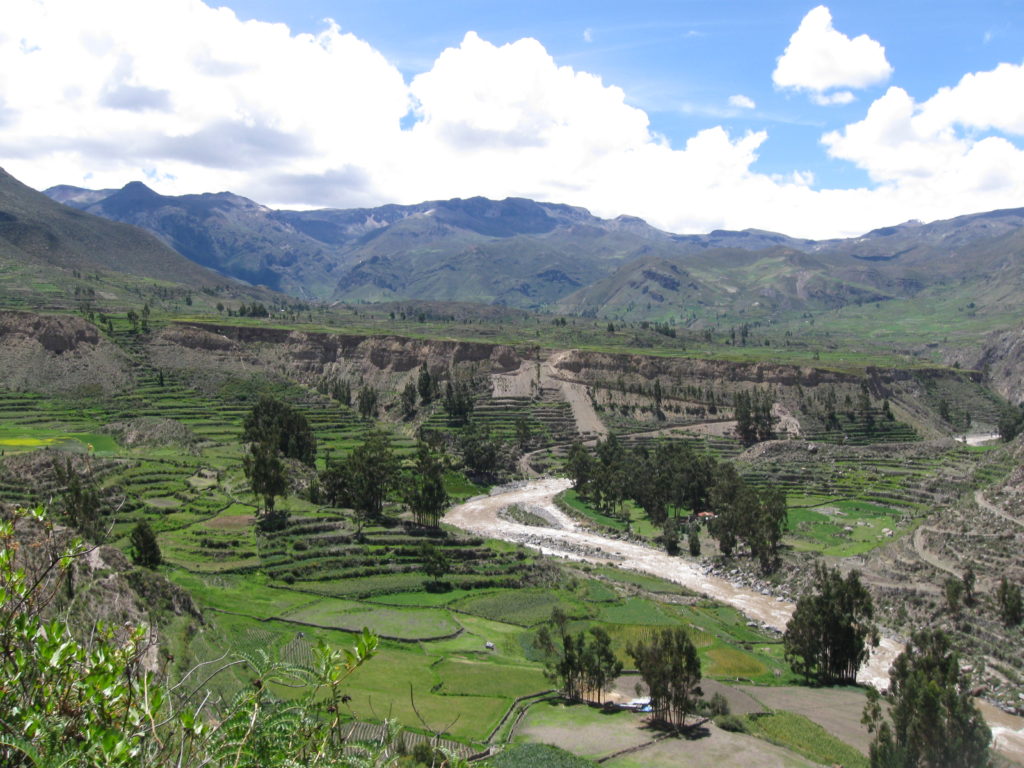 20) Part of the Colca Valley.  This does a nice job of showing the terraced gardens they use here. 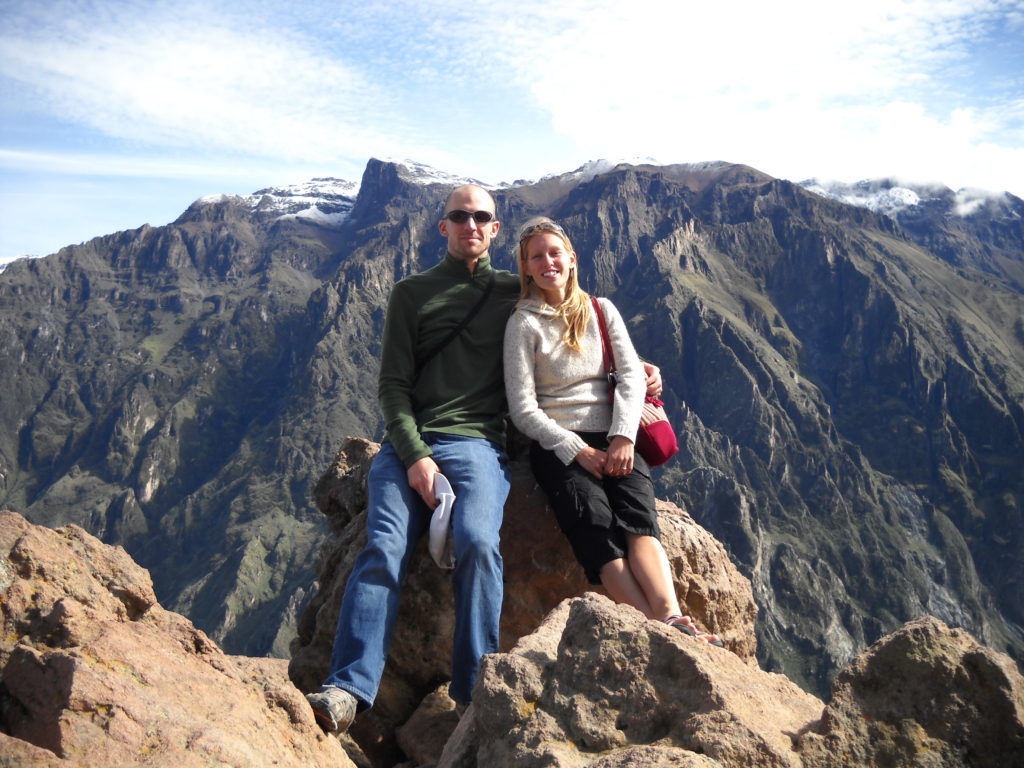 21)  The happy couple at the condor overlook.  The condors fly very close to the walls of the canyon so it’s a very popular spot for tourists to come and look.  We didn’t get any great pics of the condors, but did see a lot of nice views of the canyon! 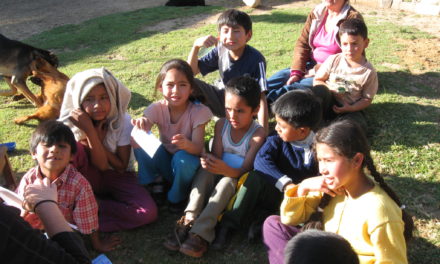 Getting out of the city