My alarm clock goes off at five. It’s been about four hours since I fell asleep. I’ve woken up to go to the early-morning festivities for a neighborhood circumcision ceremony which is locally and collectively referred to as one of several Uzbek “weddings”. I have been a Peace Corps Volunteer in a small provincial town in Uzbekistan for more than a year now. The people of my town are exceedingly friendly and known to be the most festive in the country. If there’s a wedding to go to, it will be a neighbor of mine pouring the vodka and cracking jokes for the table. 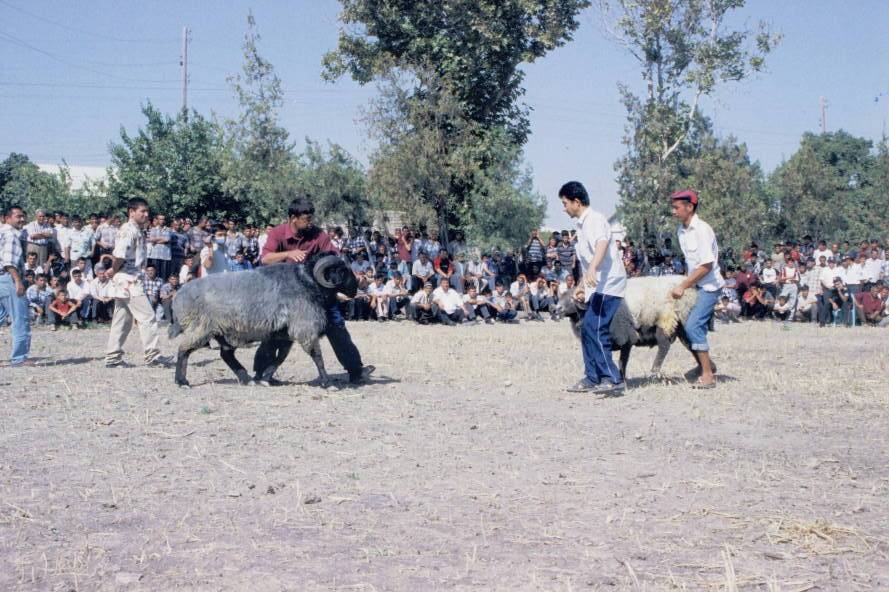 An Uzbek man can reasonably expect to be the main participant in four “weddings” in his life. There’s the bishek-toi (new baby wedding), the sunnat-toi (circumcision wedding for boys), the niqoh-toi (marriage wedding), and the final funeral celebration. All of these are pretty similar in the arrangement. Neighbors and friends and recent companions and new acquaintances and coworkers and their families all come out for the bash. Part of the wedding which is limited to men only is the morning plov ceremony that I have woken up so early for.

We can hear the horns before we can see the house. Big bellowing long trumpets announce the opening of the wedding. Guests arrive streaming onto the street. It’s been blocked off to cars and set with plastic tables and chairs. Most everyone is wearing their skullcap with the local evil-eye preventive charms sewn on. The hosts are leading people in, and everyone exchanges head-nods with their hand across their chest in the wonderful Muslim greeting. It expresses piety, modesty, honor and deference all at once.

Once a table is filled, the serving and eating begins. One man pours the tea the requisite three times, another opens the vodka, young boys run around handing out tomato and onion salads. Older boys quickly follow them with plov, the steaming rice, carrot, and meat dish that is ubiquitous in this part of the world. The word is the root for English “rice pilaf”.  Legend states that Alexander the Great’s army chef was puzzled over what to cook with such simple ingredients. Plov, it became, and apparently the soldiers took to it heartily because there’s not a celebration in Central Asia without it. The dish is slightly different every time you have it. Or so I’m told. Plov is like fine French wine, far wiser people than I can detect the subtitles of cooking it in different ways. I just enjoy it and don’t bother with the shades of distinction.

Everyone eats. The plov is packed into spoons or palms and slid into the mouth. Neighbors mutually implore each other to eat. Vodka, tea, soda, and melon are passed from hand to hand to hand and finally to mouth. The plov portion is just finishing up as the young boy of honor is brought out in his turban and robe made of velour and gold trim.

The grandfather holds up his grandchild—today a man. Speeches are made and countless people wish the young lad success, health, and a large family. One of the elders has had a bit more vodka than he should have, and expresses his hope that “what the mullah made short today, may it be much larger in the future!” Great laughs come from the men at the tables, great sighs from the ladies looking out from the doorways.

People begin to finish their meals and work their way into the adjacent park. Today’s wedding is even more noteworthy because there is going to be a ram fight. The hosting family has spent about $10,000 on the prizes for the winning rams.  For perspective this largess is spent in a country where a person pulls down an average monthly salary of $80. All local ram owners have been invited. As such, there’s quite a crowd waiting around the field when we arrive.

As we walk in, we see the rams tied up and waiting for their moment. A few are banging their head against the trunks of trees. These are the berserkers, the ones given their due space. Other rams are congenial enough to be petted. They all have nicknames. Tornado, Gypsy, Super, and several Tysons are all ready to win their masters a rug or maybe the championship prize of a camel.

The park fills up over the course of the hour. The camel is terrified, frothing at the mouth, and difficult to control. Dust piles up around its stamping legs and passersby futilely try to keep their pants clean while inspecting the beast. The musicians have turned the music more upbeat and a costumed girl dances for small notes from the bystanders.

Finally our host comes out and takes the microphone from the band. There are yet more speeches. People are beginning to get tired and are itching to see some action. The rams peacefully look on, grubbing for grass. One man speaks for ten minutes, repeatedly answering his own rhetorical questions. The sun begins to beat down and the vodka fades. I desperately wish for a ram to dash across and butt him off the field. Finally it’s over and the crowd roars relief and satisfaction as the first two rams are brought out.

Someone notices my camera and urges me forward for a better shot.  The aggressive hospitality of the crowd has pushed me right out onto the edge of the field for a front-row view. I’m an honored guest, but having about a thousand people stare at me as I stare at the rams doesn’t feel so honored.  As the rams are squared up, I feel eyes lift from the foreigner to the real sight.

The rams break free of their owners and the heads of the animals smack together.  It sounds like fencing with logs. My unease at watching the fight disappears in the rush of the moment. The rams shake, back up slowly, and run towards each other again for a mighty smack. They back up again, but they’re not walking backwards in perfectly straight lines. They are backing up slowly but surely in my direction. Smack, another shake, another move towards me. I start to look anxiously at the ditches, benches, and speakers blocking me from an easy exit.

Smack, they crash again and one of the rams bows out. The crowd gives its solid approval at the performance, the beaten ram runs back…. towards me. I snap a picture of imminent impact and scramble to get across the ditch. Dust billows up as I try to cross over the side of the field; the shamed loser is scared and looking to get past or through me. I hop up onto a ledge full of people, the ram stops short and nonchalantly strolls in the other direction. I laugh at myself along with the rest and decide that I’ll enjoy the following matches as a local would—on the sidelines.

The other rams are brought out in pairs and steadily the rugs and other prizes are passed out. It comes time to give the camel off. A monster is led onto the field. It’s huge, at least waist high on a tall man and I can’t begin to guess how much it weighs. The horns curl back under and over its ears and the gray wool shines in the sun. He’s the reigning champion. The speaker entreats someone to challenge him. Minutes pass as the speaker assures that the loser will also get a consolation prize. It’s still a while before a smaller ram is led out. The excited owner pulls it by the horn; it’s not as willing.

The animals are arranged in the middle of the field. The speaker calls for the American guest to come out and watch. I’m pushed out to the field again. The large and imposing ram is even more so from close up. Suddenly the white challenger makes a dash at the large one. Smack. Perhaps he can pull it off…they back up, the owners, a few feet away, encourage their beasts with clapping and cursing. Smack, and they bounce off each other. Both shake, back even farther up, and run at it again. Smack, the white ram’s legs buckle but he regains.

The champion doesn’t even appear winded. They hit and retreat again. The white ram backs up, backs up, backs up, and people start falling down as he backs into the crowd. The rams start to dash towards each other from sixty feet away. Simultaneously they both dive into the air. The champion has the mass and the advantage and blows down the smaller ram.

It’s over, the white one turns and runs. For added glory the black champion encourages the flight with a hit to the rear of the failed challenger. The crowd heartily approves. The cheers could be from anywhere and from anytime.

As the prize camel is brought onto the field, the owner beams and the host makes generous gestures. He’s too far on to the pitch to speak into the microphone but it’s not needed. We’ve heard the same lines a thousand times today. The proud winner stands by its owner, avowed champion again. The camel suddenly jumps and spits, the startled winning ram turns tail and runs off the field followed by its owner. The crowd enjoys this sight as much as the fight. Old men turn grinning to each other. “There’s always someone bigger!” they mutually confirm.

I pick my way through the crowd, past the spitting camel, and exit the dusty field. Another wedding, another memory, but this isn’t one I’ll soon forget.

Jett Thomason was a TEFL volunteer in Uzbekistan from 2002- 2004 in the United States Peace Corps.  Since then, he’s worked in Afghanistan and Iraq and traveled extensively throughout Asia, Europe, and the countries of the Former Soviet Union. He lives in Washington, DC.

3 thoughts on “Of Rice and Rams: A Boy’s Circumcision Ceremony in Uzbekistan”