“So what’s the food like in Canada?” I ask. Chris, environmental engineer and admitted Canadian, is telling me about his country at a Washington, DC winter happy hour.

“Well, basically it’s pretty much the same as the States.” I knew it. “But there, we’ve got a great bar food that originated in Quebec. It’s called ‘poutine’.” 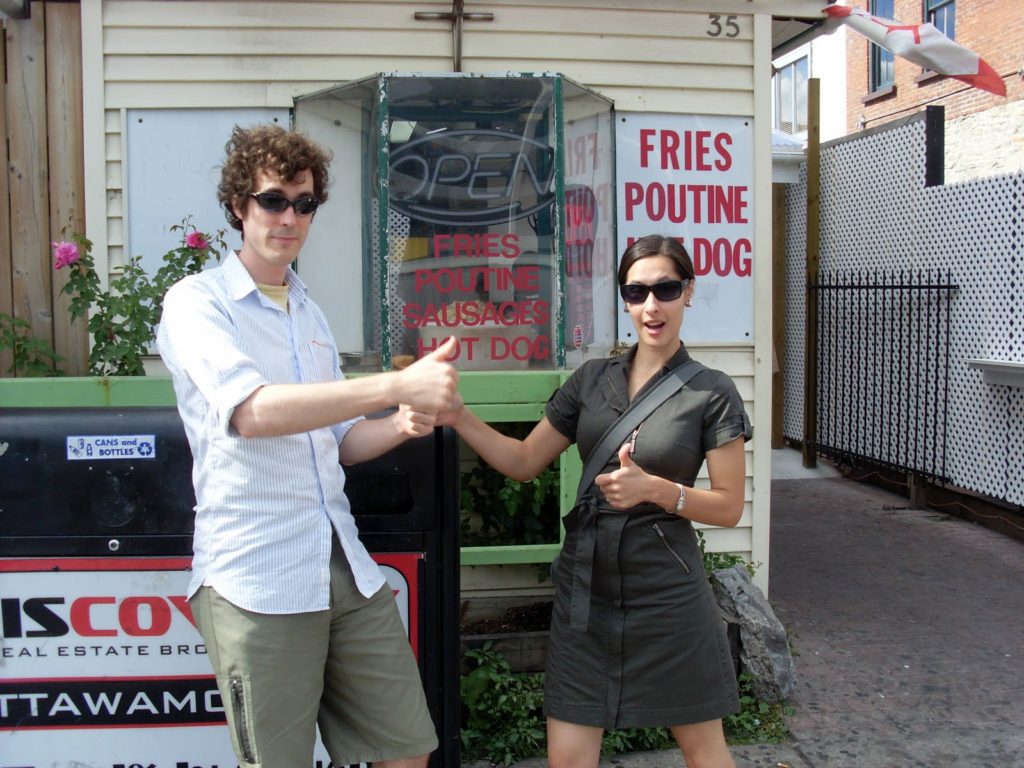 Not quite the melodic French flow of words like hors d’oeuvres or entrée that I was expecting of a dish from Quebec.

Cheese curds were introduced to me by an ex-girlfriend from Wisconsin, so there’s a soft spot in my heart for a squeaky curd. But I’m not really feeling the pairing with French fries.

“And then,” Chris continues, “You add gravy on top!”

I take a long swig of my beer. “Chris, you Canadians are alright, but I’m never eating that poutine stuff.”

Six months later I’m cowered over an Ottawa diner with Chris, his lovely wife Christine, and a large group of their friends. My fork is poised with a prime load of fries, cheese curds, and slightly congealed brown gravy. I take a bite. Man, it’s so good.

Ottawans know that poutine is good. They love poutine and God love Ottawans, they’re not afraid to buck tradition and take some chances with the dish, too. In my ten days in Ottawa (great city and you should visit) I started seeing poutine in its classic incarnation and other interpretations everywhere. I knew that for this experience, these tales to have any real credibility, I’d have to capture photographic proof. Thus was born, “Portraits of Poutine”. 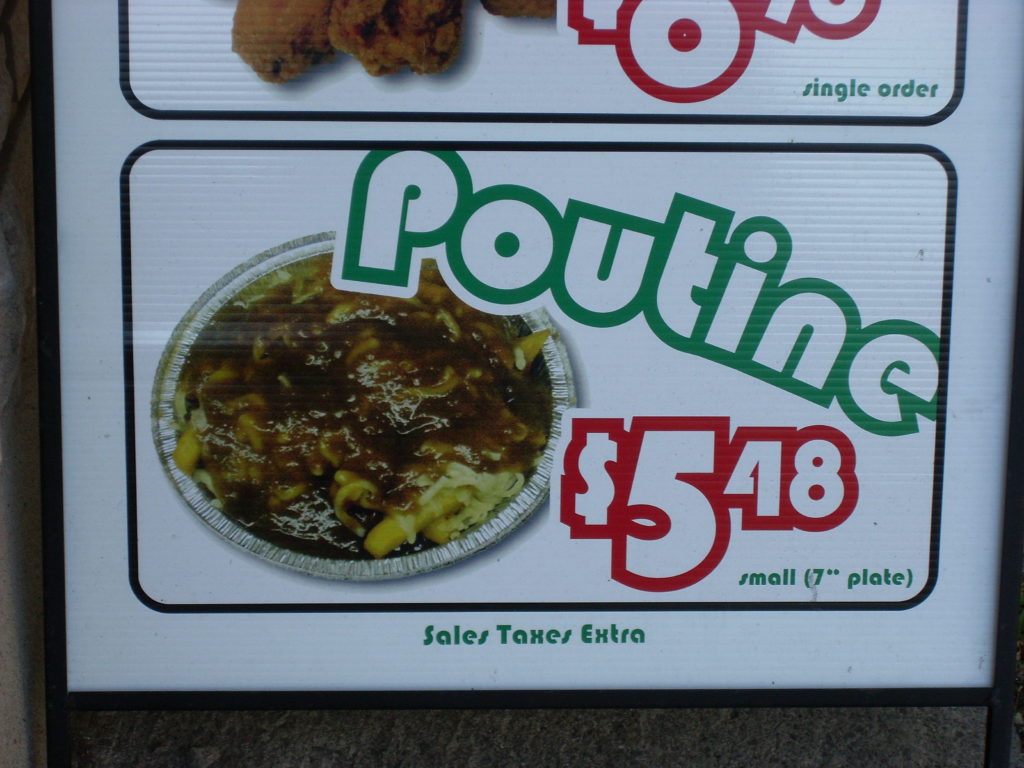 This is it. The classic, the renowned, the poutine. Legend has it that the gravy is to help keep the French fries and cheese curds warm in a cold Quebecois bar. Doesn’t it look wonderful here? Yours, for the idiosyncratic price of $5.48. Canadian. 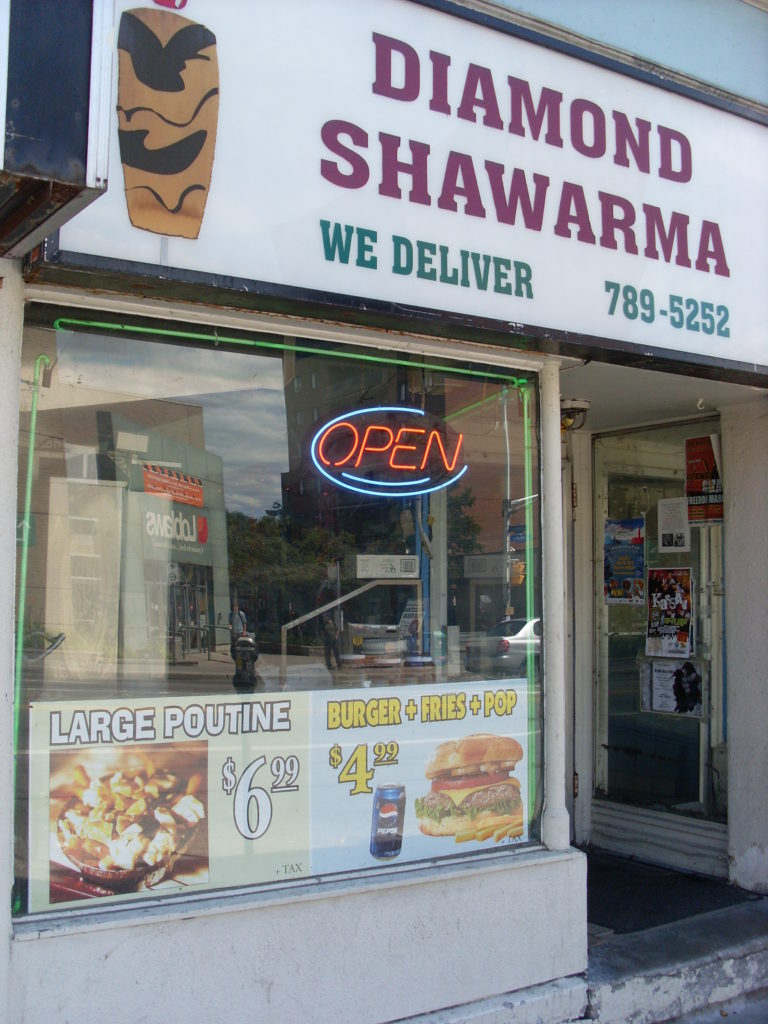 I’m not kidding when I said the poutine is available everywhere. Everywhere. 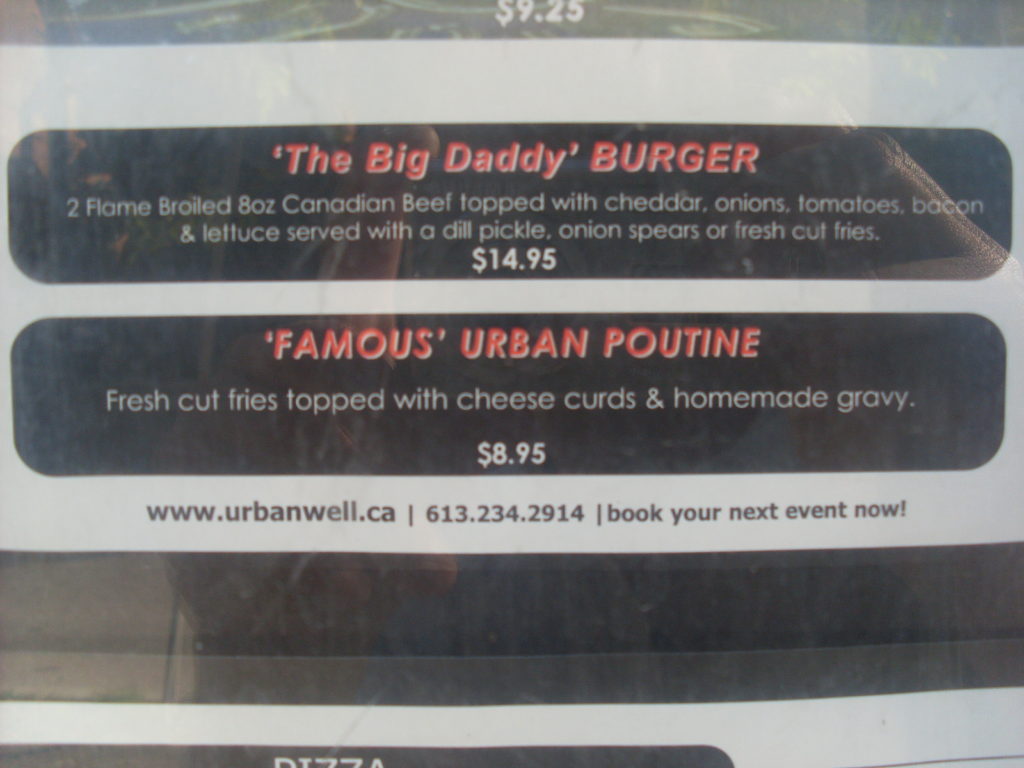 I don’t know what’s more pretentious. Claiming their take on basic poutine is ‘famous’ or somehow belittling what I’m sure is lovely ‘rural’ poutine. Let them know what you think at www.urbanwell.ca 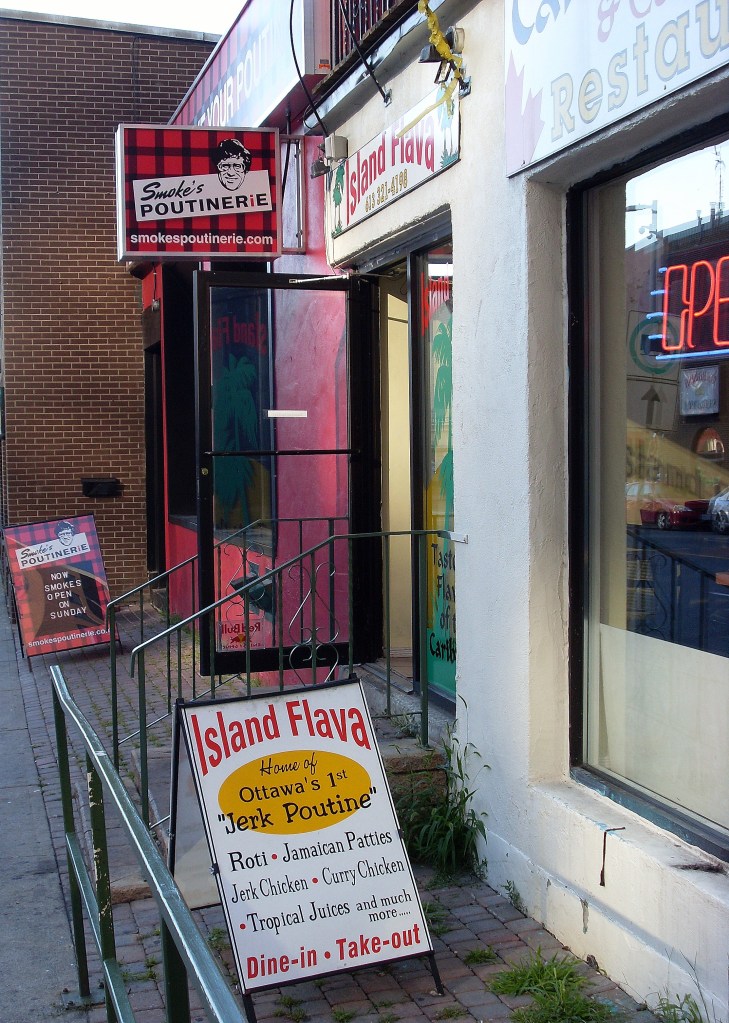 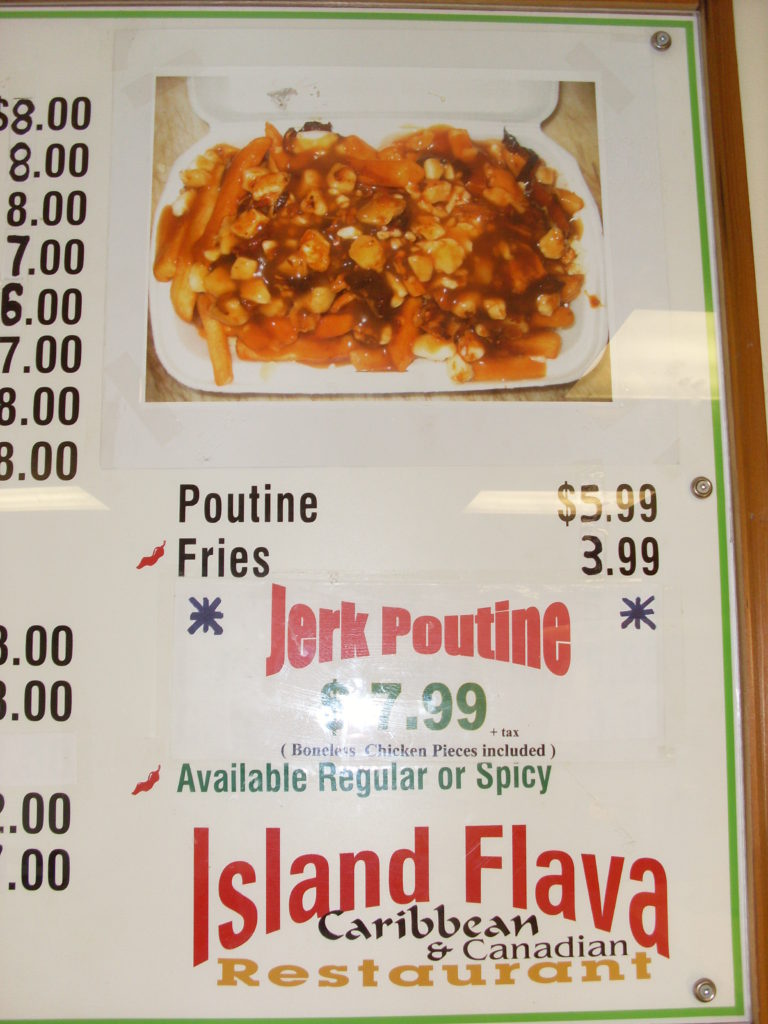 How can you not spring for the $2 addition of curds, gravy and a lil’ island jerk flava? 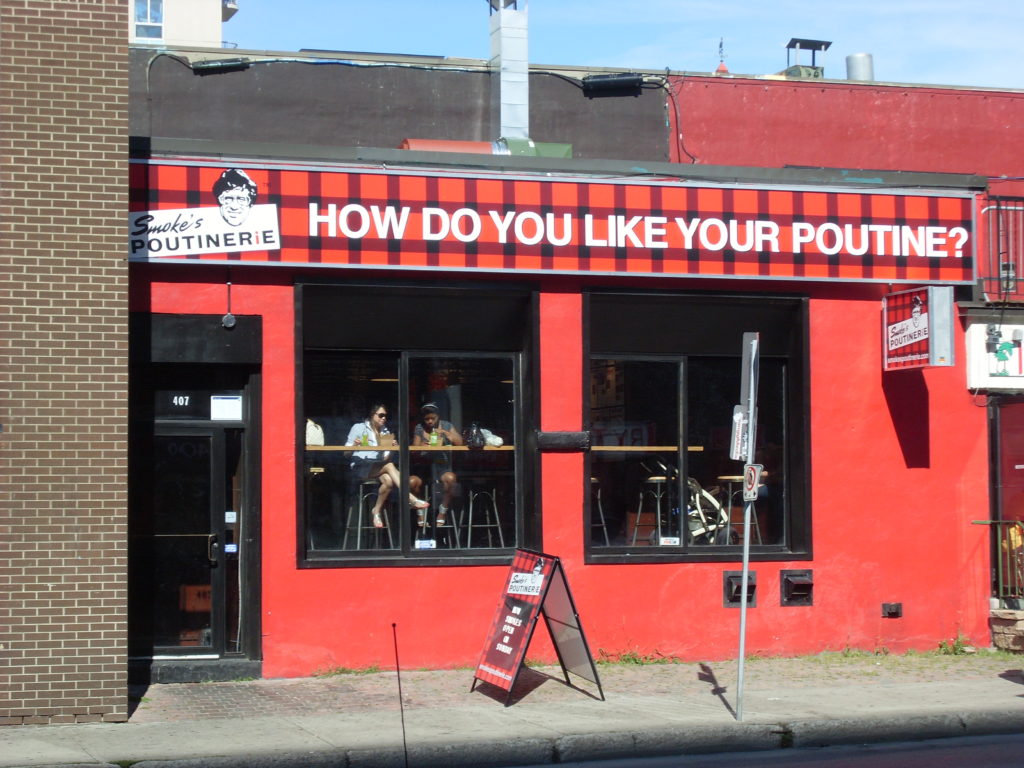 I was a big fan of Smoke’s. It is the kind of poutine joint not afraid of asking The Eternal Question. “How do you like your poutine?” 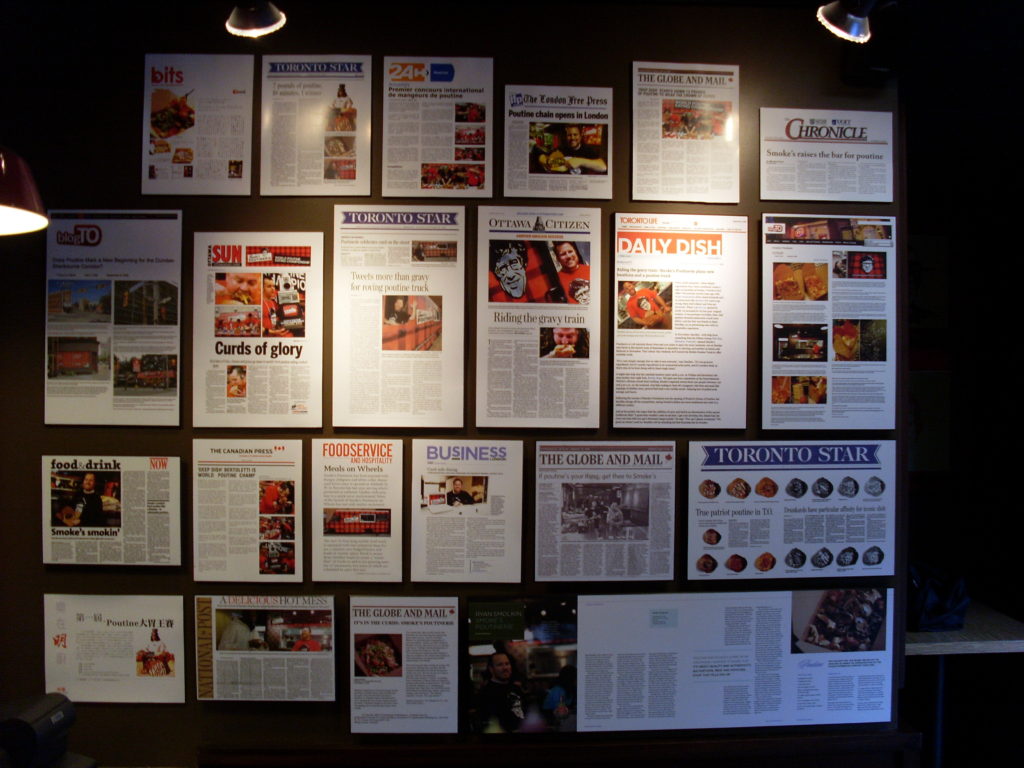 Newspaper clippings celebrating poutine. Note the stark and shameful absence of American newspapers on this wall. 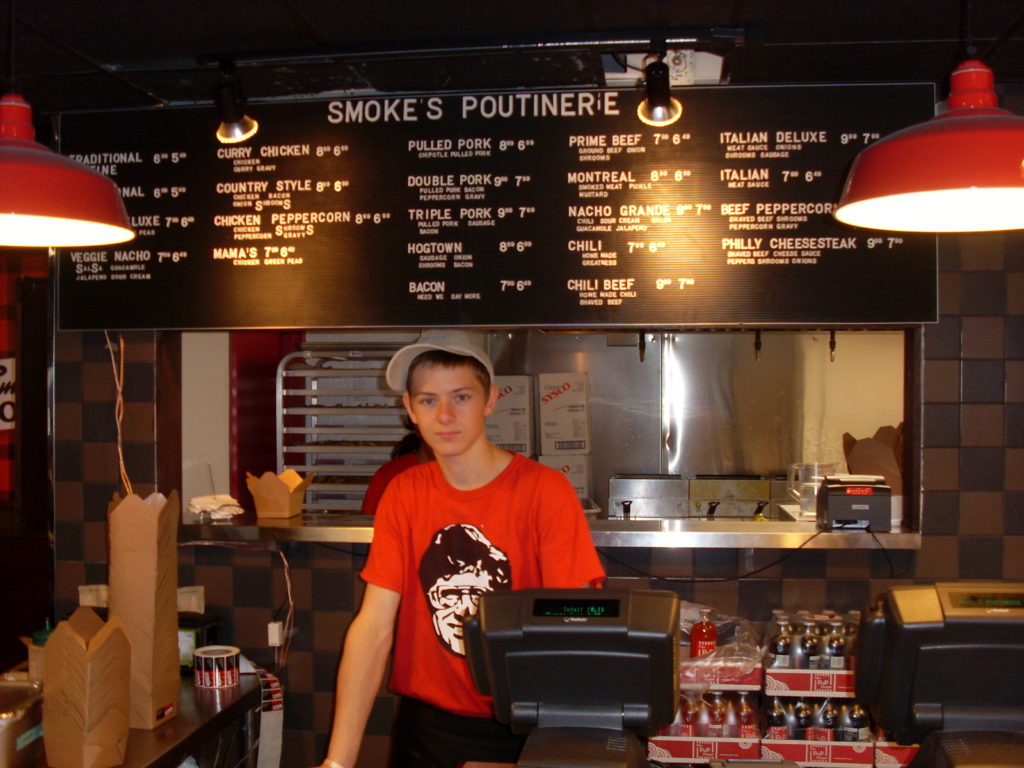 This is a photo of the counter of a ‘poutinerie’.

Note the wide variety of poutines. From Italian to Mexican to American South and back, Smoke’s has it all.

Note the young man at center. He is a ‘poutinier’. Learn these words and you are ready for Canada.

Note the great Smoke’s Poutinerie tee-shirt on the poutinier. I cry a little every time I see this picture and remember I decided to pass on purchasing a Poutine tee-shirt. 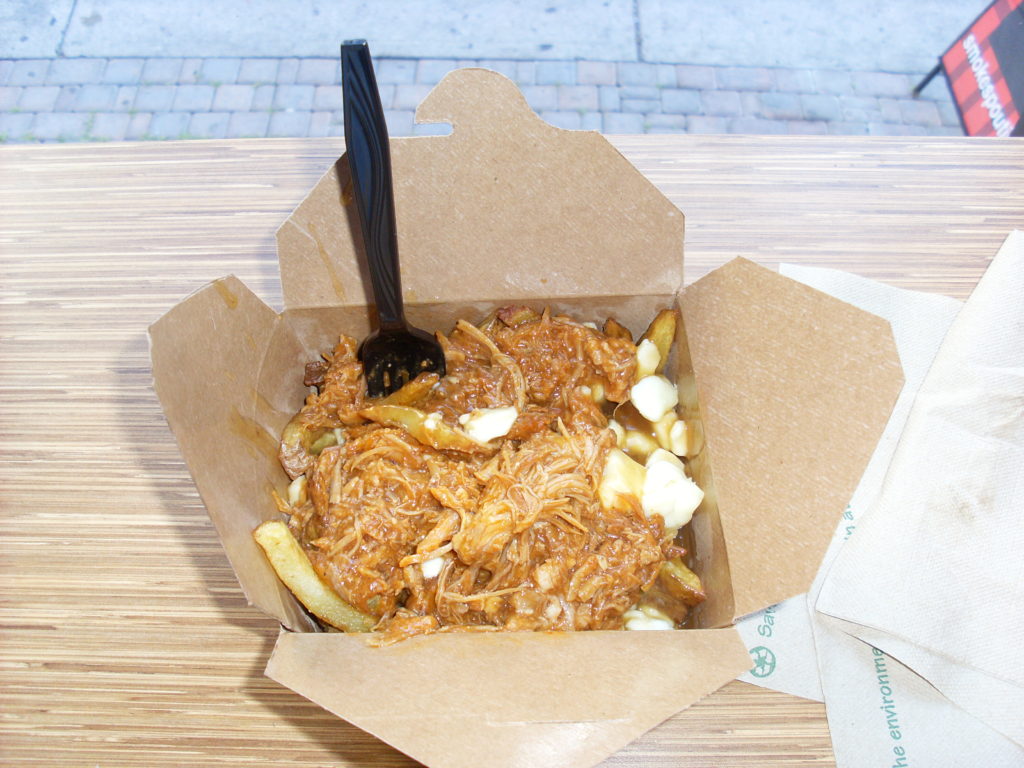 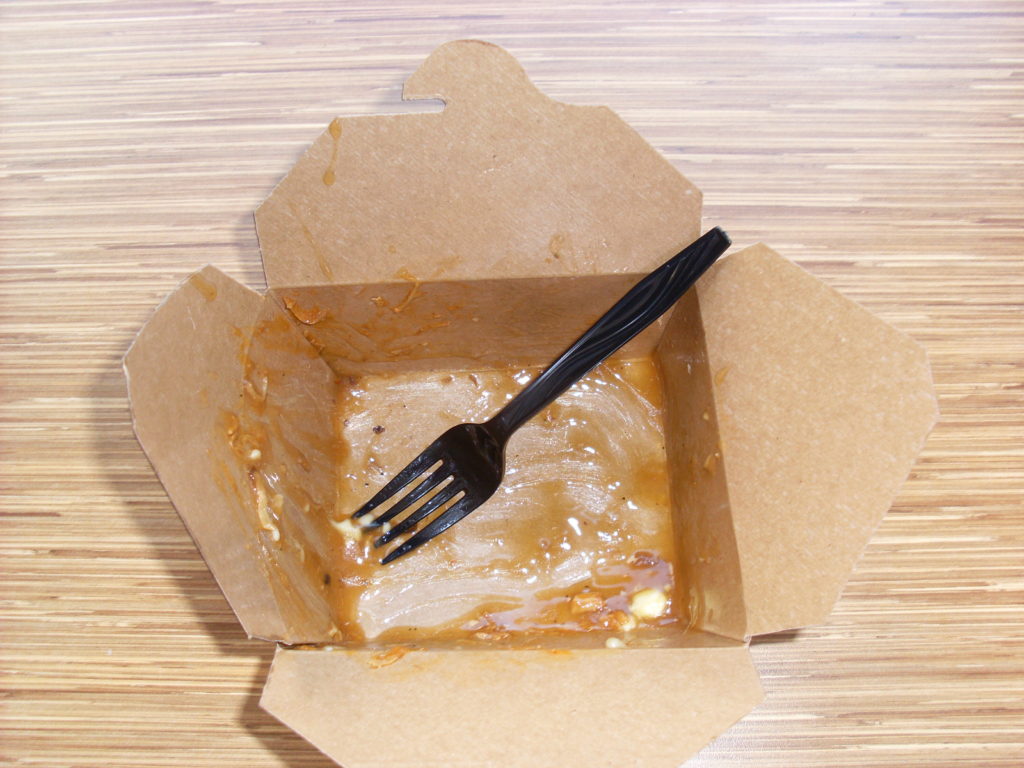 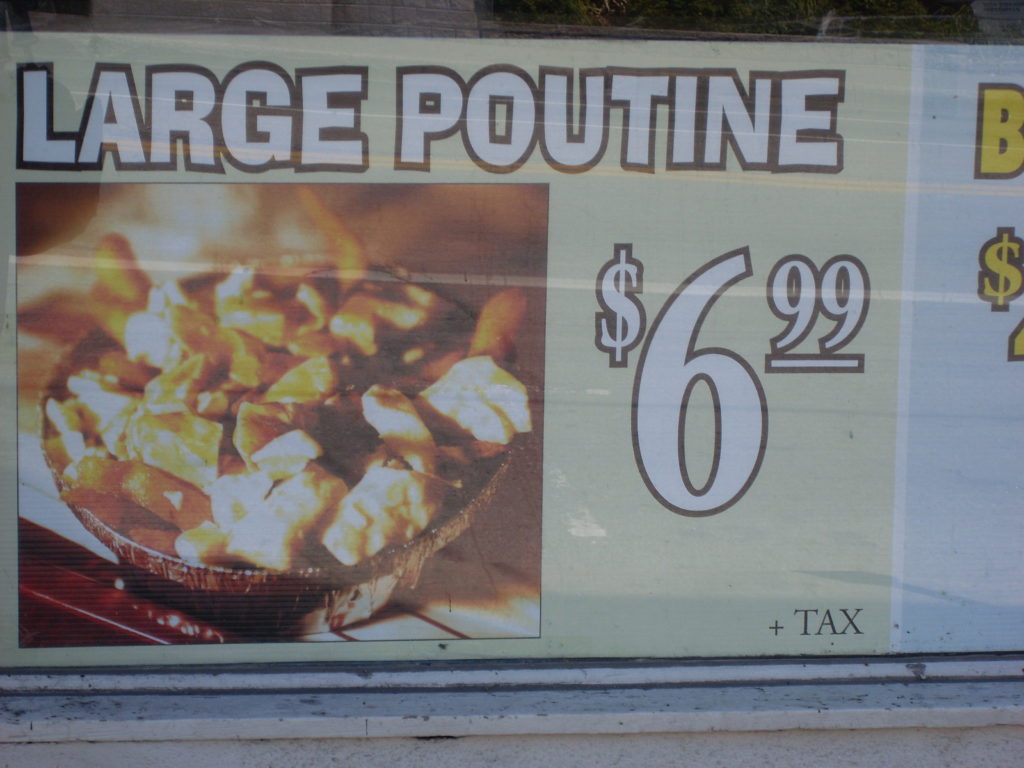 Mmmmmm….I recommend making some Canadian friends and sharing the large. 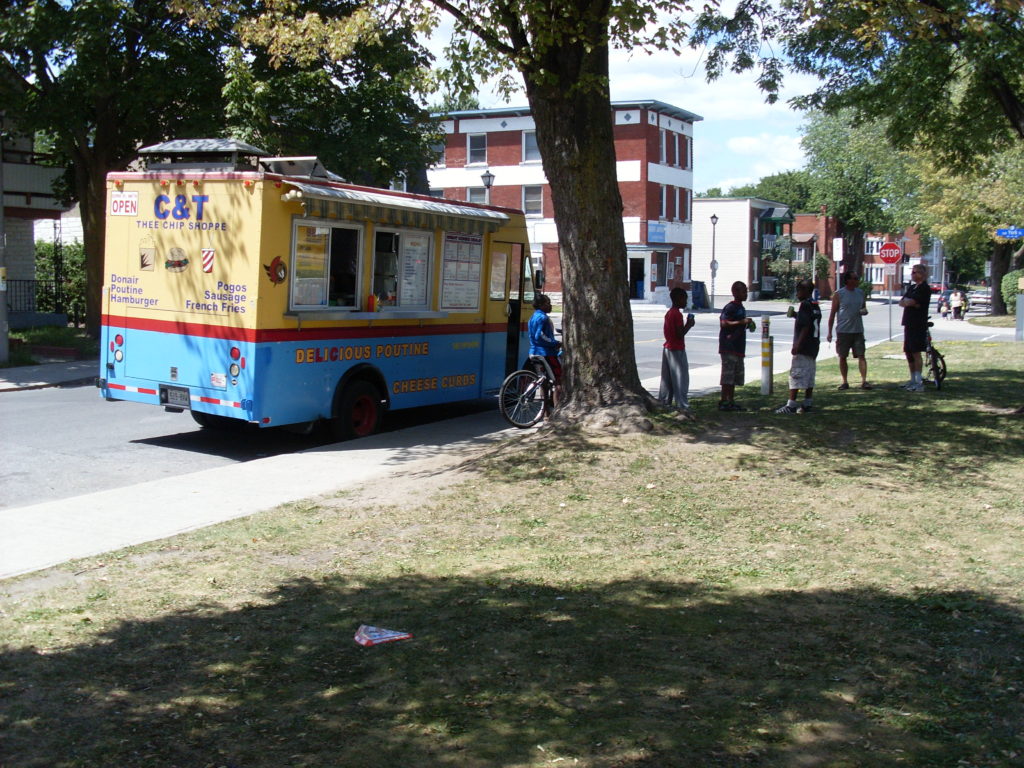 This is a shot of the closest thing to a ‘hood in Ottawa. Here, it’s just drive-by Delicious Poutine. 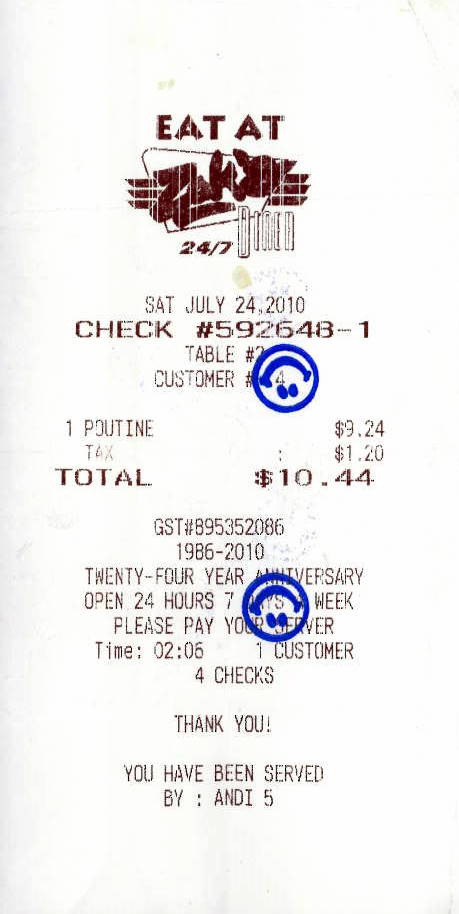 1 thought on “Portraits of Poutine”