Read Part I: On the Water in Guinea

We have been following the other boats. There is an art to seeing the schools of fish playing just below the water and on each boat men are standing tall, not even realizing their legs roll of the boat. There is an art to seeing the fish and anticipating where they will move next. Then there is the more practical approach of assuming that if there is already someone out there with a net in the water, it might not be a bad idea to cast yours, too. 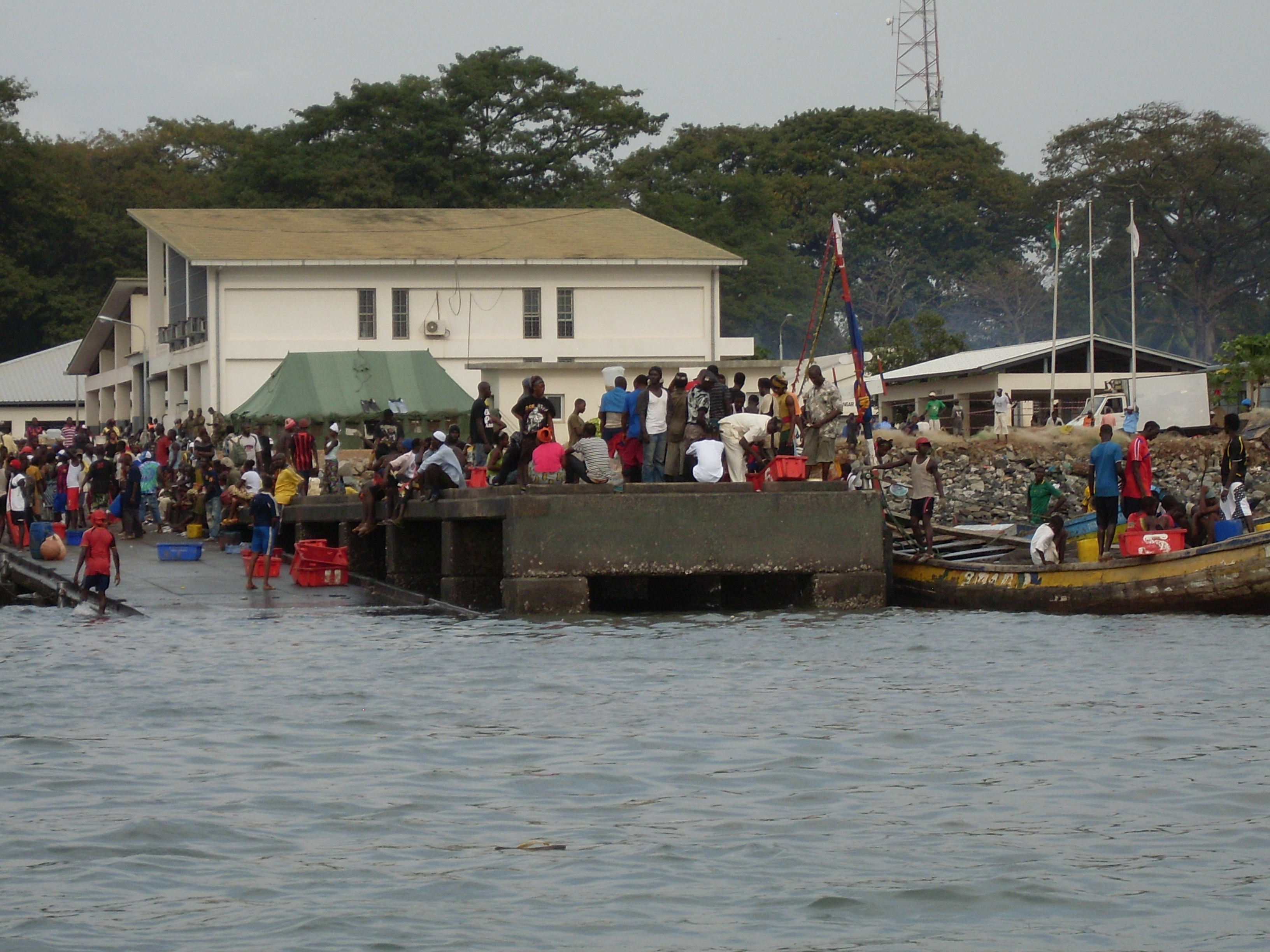 After half an hour of following the crowd, we take the latter approach and pull ahead of the first boat with what feels to me a nautically polite distance apart. One fisherman strings out the top of the net which is buoyed with small plastic balls and cut up soles of old flip-flops. The other man holds out the bottom of the net that is lined with hand-beaten lead pieces. The buoyant and weighted ends will create a 30-foot vertical wall in the water snagging any passing animal. Hopefully a lot of them.

The net rolls through the fishermen’s hands. The captain guns the outboard from time to time to give us enough forward momentum to lay out a clean line. The bottom of the net billows out in the blue water before sinking out of sight. In ten minutes, all 2,000 feet of the floating trap is in the water.

I had not been briefed on what to expect next and I realize I have nothing beyond a general guess as to how the fish are caught and brought out of the water. We are bobbing in the water, rolling with the waves, and waiting to see what comes our way.

Fassiney looks at me from the stern of the boat, making a scooping motion with his hand. Two realizations hit me. The first is that they are breaking for lunch so this could be a long wait. And second, while I appeared to be impervious to sea-sickness when the boat was moving forward, this is no longer the case. We drift, rolling up and over the tops of the waves.

The fishermen scoop rice into their mouths. I just feel nausea creep up on me.

Fassiney pulls over a plastic bucket and pries off the top. Unwrapping a plastic bag and then unzipping his little cigarette bag, he pulls out a small watch.

“It’s fifteen past eleven now…” Fassiney looks up for a minute. “So let’s pull in the net at two.”

Eddie knows this routine and makes himself comfortable on a cross beam, draping an arm over his eyes. I try to keep my focus on the horizon, on the islands on the other side that are faint and dark blue though the water-heavy air. Forced thoughts of how vertigo is all in the mind give me a quarter hour of control before I get ill. The fishermen politely look away as if they haven’t noticed. While my pride stings, my real fear of this moment was that they would insist on going back. I needn’t have worried. No one says a thing. 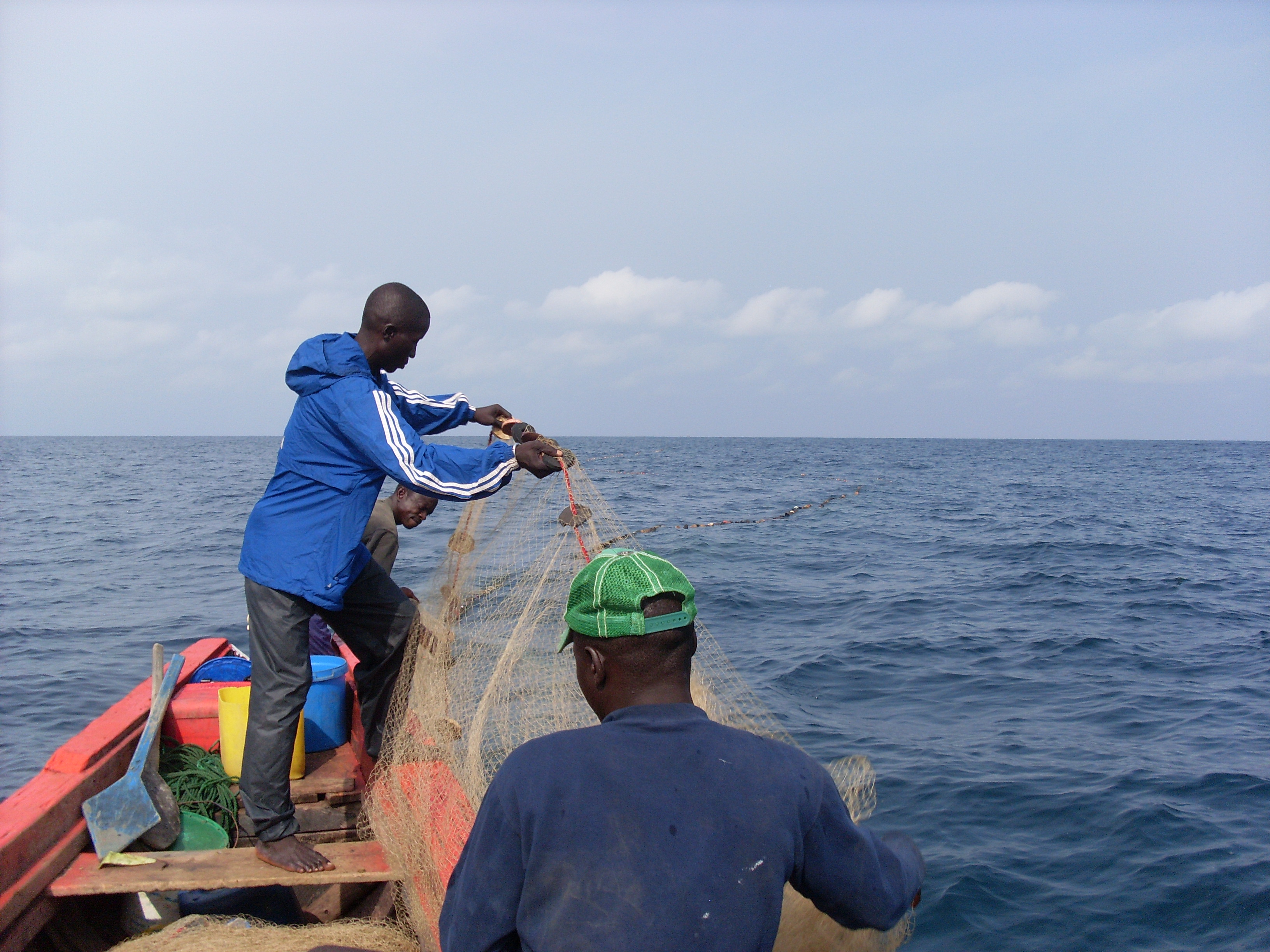 I lie on a wooden seat across the frame, adjust my hat over my eyes, and fall into a half-sleep. The fish are there, swimming along with only a distant cloud in their sky – our boat – hinting at the danger. Schools of them must be there now, arcing back and forth in the shallow, warm current below us.

They will be swimming along and then, suddenly, rushing into entanglement. All their efforts to free themselves will only make the binds tighter. Wrenchingly pulled into what must seem like a terrible vacuum of space, water will flow out and they will gasp for breath as the poisonous air fills their gills. I jerk up from my rocking sleep and realize that this idyllic tropical ocean setting is as brutal a scene as any abattoir.

The captain is awake and smoking a cigarette. Well past mid-day, the humidity clouds the boundary of the horizon and the sky and it feels far from shore. Eddie sits up. He has slept poorly, too.
“Mr. Jett,” he grabs the sides of the boat, “Imagine this space for five days, a week. It was like a prison sometimes for me.” Eddie hasn’t been back on a boat in ten years and I know he is glad he has gone out with me. Still, these are not the statements of a nostalgic man.

Fassiney tosses his cigarette in the water. “OK, we pull in the net now.”

His men put on loose pants and wind breakers. The strongest goes up to the bow and grabs at both sides of the net. He leans up, straining with the effort.

Fassiney looks at me, “This is why we call the boat bon-ta-bon.” I look at him a bit dumbly. “This work hard! You pull your muscles ‘bone to bone’. People know this boat is a hard work boat.”

The captain is right. One man in the front pulls the net from the water. Eddie and I grasp the bottom, straining to keep the weighted rope straight. The captain handles the buoy side and untangles the lines. The last fisherman is at the stern, grasping both sides and folding the net in ready for the next deployment.

I was being spared the real bon-ta-bon work, but pulling a net out of the water by hand is no easy thing. The hours in the water have lined each bit of twine with sediment and slime. Pulling the ropes flicks these particles up in a mist that quickly coats all of us with sea filth. I see now why the others first clad themselves with the windbreakers and pants.

Then up comes our first fish. It is vibrantly and deeply blue. I never quite imagined how blue a fish could be there in the middle of a dirty net, a moldering boat, under a white sky. The quivering life in the fish is short as I tear it out of the binds and toss it into the brown bilge water roiling in the bottom of the boat. There is no time for romancing the moment as the net keeps coming and we keep prying out the trapped fish, pulling in the ropes, pausing for only a split second to dip our hands in the water and wipe sludge from our brows.

After half an hour, the net is in and we are able to look at the catch. I let myself get carried away during the planning stage of the trip. ‘What to do with all the fish?’ I had thought. ‘What if we ran out of room in the boat?’ Suffice it to say, these are not problems we face.

A shallow and shimmering covering of fish in the bottom is all we have to show for the work and the wait. It might fill the one plastic box that is a standard unit of sale for the fishermen. I am paying for the gas on this trip, I am going to give the fishermen a little money, and I never intended to sell any of the fish. Still, a sense of despondency fills me as if I was depending on the sea for my next meal. It has been a while since I have felt anything like this sharp disappointment.

I look at Eddie, “I thought we’d get more fish…”

Eddie just tilts his head with a little frown.

Fassiney sees me, “Jett, don’t worry. You know, sometimes it’s like this. We can’t say what we’re going to catch. This trip though, it’s for you. You see how we live. It’s for you.”

He and the other fishermen have been here before just as they have seen boats brimming with catch pulling into port. This is just one day and one time out.

“We’re going back out tonight,” says Fassiney. “These herring, eh! They’ve been sleeping all day but tonight they come out to play. We go out four, five, six hours and then lay the net. Eh! Then we make some catch! But now we go home.”

I want to go home. It’s a long day in the sun and I wash the dirt off as best I can hanging over the side. We take turns bailing out the dirty water while the fishes’ eyes slowly lose their clarity.

Disappointment in the catch fades to resignation as we ride back towards port in the heat and humidity.

“Captain, how much do you and the other fishermen make from a trip?” I ask. I know the owner of the boat pays for the gasoline, oil, maintenance. If I had to guess, I would figure a fifty-fifty split on the catch.

Fassiney gestures to the front of the boat. “There’s five sections. Sometimes you come in and the boat is full – Full! – of fish. Sometimes the boat only has a little fish, like now. No matter, the owner, he takes eighty percent. That’s maybe three and half sections. The rest is for us. When it’s very good, then we can take 200,000 Guinean francs.”

200,000 Guinean francs is a bit less than $30. With a normal complement of five to six men, that’s less than $5 each for a long day’s work. These are not captains of the sea as much as they are tenant farmers, trapped by contract and poverty to their work.

We round the sea wall and pull into port. I shake hands with the men, passing Eddie some money to give them on my behalf. It’s Africa and it would be rude to not use an intermediary.

“Take care, Mr. Jett,” Eddie admonishes me as we walk across seven or eight other fishing boats to scamper up the dock.

I do take care. You don’t fall into water this close to Conakry and its open sewers. My appearance on the dock attracts even less stares than the first time.

Fishermen are preparing their boats and loading ice blocks into plywood-and-styrofoam coolers. These are the snapper boats that will spend days in the open ocean. Women fishmongers are inspecting catches, shouting out prices over each other while other women are weaving between the people with buckets of fried bread and meat balanced on their heads, selling the fishermen their next meals on the water. Men going out, men coming in, and the fish between ocean and market.

Jett Thomason works for the U.S. government managing small agricultural development projects in Africa. A former Peace Corps volunteer in Uzbekistan, he has worked in Afghanistan and Iraq and traveled extensively in Latin America and the former Soviet Union. In his current job, Jett copes with responsibility and limited time for indulging wanderlust by writing the occasional blog entry and travel story.