I’ve been living in Guinea’s capital, Conakry, for six weeks now. Conakry is a city built on a peninsula jutting into the Atlantic and it has long outgrown the French planning for the town. Two million people have been living poor and densely packed for fifty years in the limited space. Each day I’m driven to and from work along this peninsula. 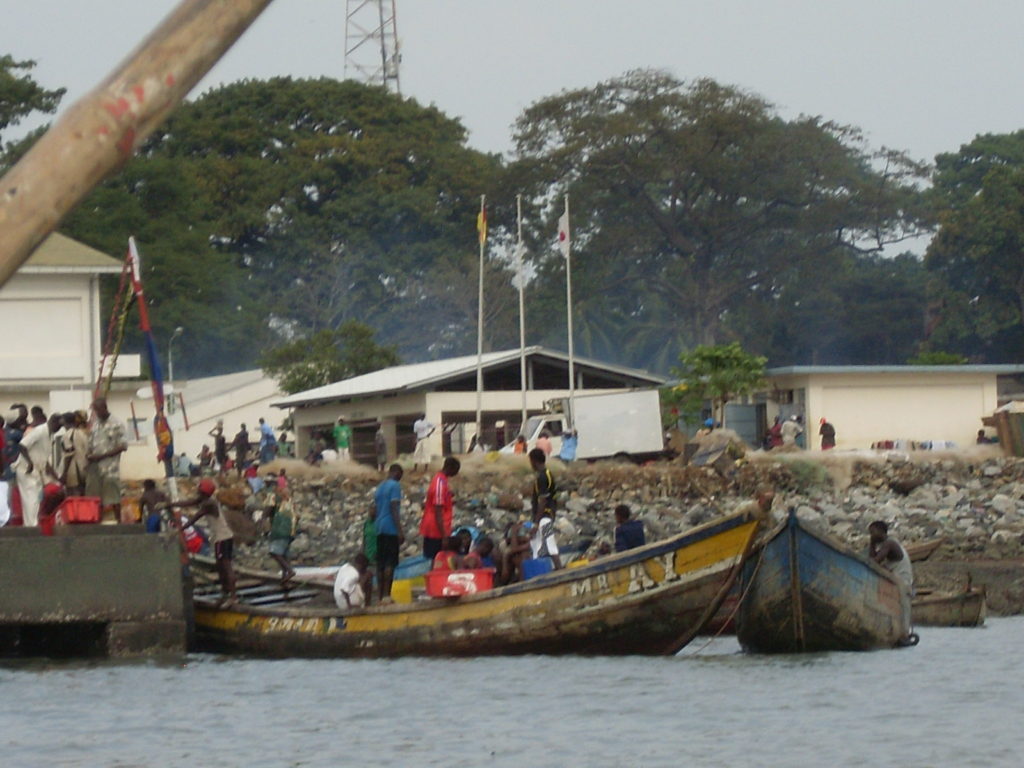 Fishermen at the Conakry port loading provisions and ice for a trip out into the Atlantic. The bon-ta-bon is a Sierra Leonian boat design used all along the West African coast for fishing trips of anywhere from one to ten days.

With long hours at work and long hours in sitting in traffic, most of my interactions with Guineans are with the staff drivers. My favorite driver is Eddie. My most substantive conversations in Guinea with Guineans have been in the half hour commute each day.

It is currently the dry season and we recently had a burst of rain – last monsoon fits of the climate making its cycle around. I catch sight of the ocean between concrete buildings, golden water with the setting sun outlining one of the islands just off the coast of Conakry and the air much clearer with the rain-cleansing from earlier in the morning. This pristine view from a distance belies the scene along the road where everyone is rushing and hustling to get by.

We roll off the main autoroute and onto the corniche road that leads to my apartment building. At each bend there are women sitting on short, squat wooden stools with fresh fish hanging for sale.

“Mr. Jett, it’s a hard business,” Eddie says. “I did this for six months when I was living in Sierra Leone. I did this only for work, to eat, because it is too hard.”

I can see the small boats out on the horizon, seemingly stationary on the water.

“What’s it like? Do the fishermen go out in the morning, come back in the evening?” I ask.

“Some land in the evening. Some go out at night and come in back the morning. You don’t want to know. It’s hard business. Hard!”

I pause. I do want to know. “Do you know any fishermen here? Anyone who would take me out there with them?”

Eddie turns his head briefly from the traffic to me and then back again. I can see him weighing the balance of a kind of friendship with a client – me – and what it might mean to help that client get onto the water.

“I know a man. A good Christian man who helped me once with work. I will ask him to see, and if you don’t mind, I would go with you.”

Eddie is as good with the plans as he is with the drive. It’s Saturday and I am already awake for the neighboring mosque’s call to prayer at 5:00. Somewhere there is a small wooden boat bobbing in the Atlantic, and a crew that’s now two men short to make space for Eddie and I. 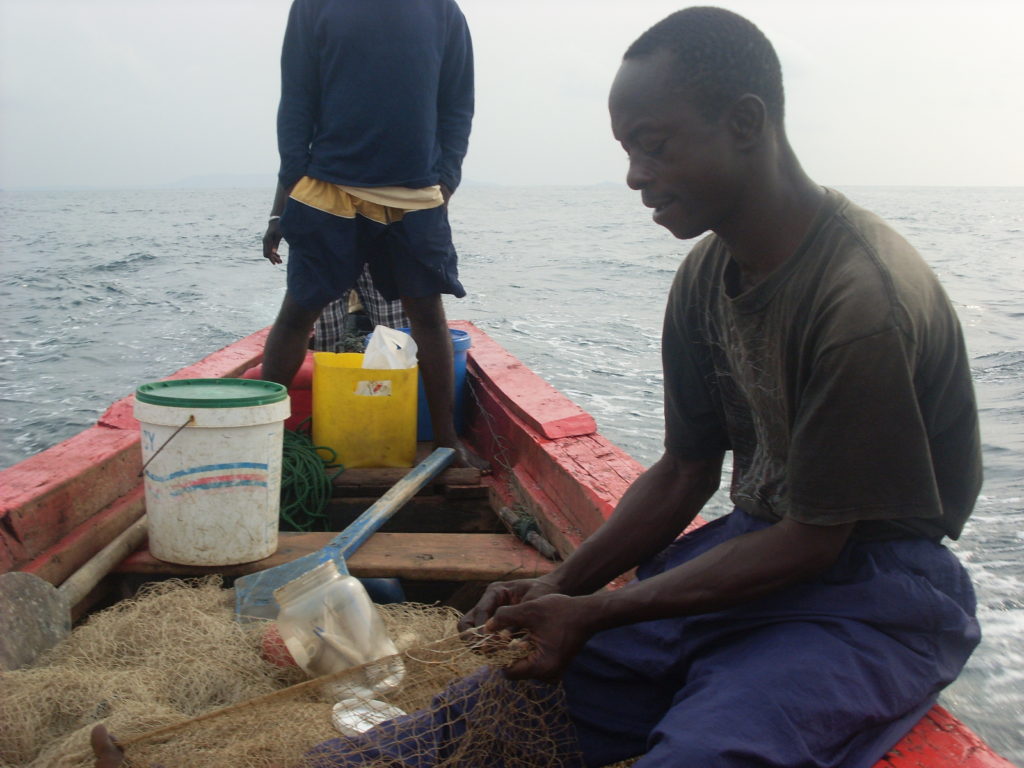 The captain, Fassiney, makes repairs to the net as the boat makes its way to the fishing grounds.

Fear comes to you in interesting ways. Little fantasies play out in my head of the regretful call to cancel the trip and the wave of relief that would bring. I’m tired and at 5 am, I don’t really want this experience. Thinking about the planning, Eddie was pretty insistent on the life preserver. Was that from a healthy sense of caution or should I know more about what I’m getting myself into?

As I’ve learned before, the only way to deal with this kind of pre-adventure panic is to go through the mechanics of preparation without actually stopping to sit and ponder how ridiculous the plan might be. Pack water, apply sun block, prepare a small lunch, and stash money in two plastic bags at the bottom of my sack.

Too late to back out at this point, the car with Eddie is soon outside waiting for me and I let the momentum of the planning and packing carry me along.

The morning sky is lit as we park the car and walk into the port. People are still asleep on the concrete stall slabs where the fish will be sold in just a few hours. I get some stares, but just a few. People are already too busy to gawk.

Roles at the port are framed by gender. Men are crawling over the wooden boats, adjusting the red, green, and yellow ribbons on masts, and moving equipment onto the crafts. The younger fishermen are already bailing water that has seeped in during the night. Bailing water before setting out strikes me as a bit of a bad sign about what to expect on the open sea.

The women here are the fishmongers. Older ones, dominant in stature, are milling down by the boats, waiting for the first arrivals of night fishermen. Younger women are squatting on the jetty, selling meat pies or walking down with buckets of small sundries balanced on their head.

Eddie takes me down the pier. “Take care,” he says while pointing out gutted fish and –yes- banana peels that might make me slip. “The owner is just here.” 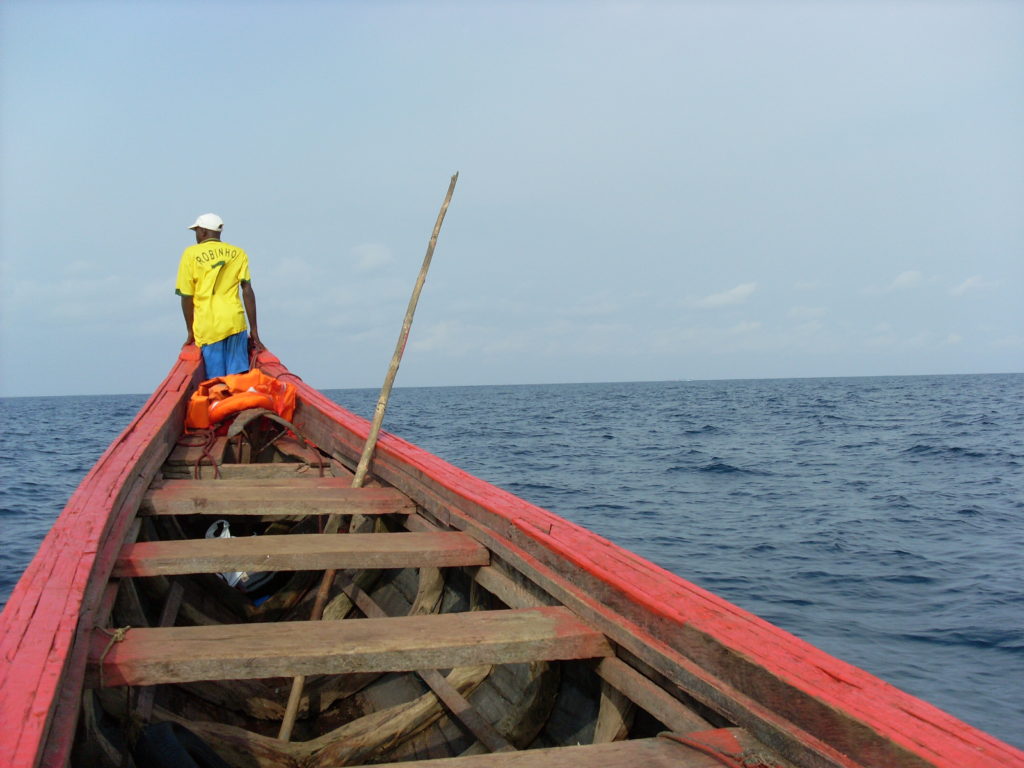 Eddie scans for the flicker of activity on the water’s surface that would reveal schools of herring. It takes a sharp eye to recognize the difference of fish movement and waves as well as an attuned ear for the flapping of their tails on the water.

We shake hands with the boat owner who is wearing clean jeans, a nicely ironed shirt, and shoes that are not meant for sailing. He’s not going out on the boat with us – he just owns the Arise and Shine No. 3 that is taking us out on the water. There is another man next to him smoking a cigarette. Shorter and with old clothes, his angular frame has none of the boat owner’s healthy belly.

“This is the captain, Fassiney,” says Eddie.

“Hello sir! You come from America?” he says.

“Ah, great country!” He’s beaming and continues, “We are going to show you how we fish. We go for herring today. They’re good fish, lots of them here.”

I nod, looking at the Arise and Shine No. 3. There’s a bit of water in the bottom, but it’s visibly in better shape than its neighbors. It looks about five years old, maybe a bit more.

“Yes, it’s good.” This is the experience I asked for and can’t back out now.

Eddie jumps in first and nervously watches me clamor down into the boat. I hand him my flip-flops and plastic bag of supplies and get myself seated on a crossbeam. The captain and two other fishermen climb in, arrange the outboard motor, and then we pole ourselves out of the scrum of boats.

Fassiney looks at me and looks down at the t-shirt I’m wearing.

“Ah, you’re a sailor?” he asks. I look down, realizing my college tee-shirt is from the rowing team’s bar.

“No, no, I’m not a sailor,” I say and uncomfortably trace the outline of an oar that I really wouldn’t know how to use here. I pause, and then I check my baseball cap. ‘Harpoon Brewery’ is written in big letters with a big whaling harpoon on the front. I’m not a sailor but you could be forgiven for guessing it from my outfit. When did our clothes become so nautical?

“Well, good shirt.” The captain gets in the boat with us. On the dock the owner is already involved on his cell phone, walking away as he talks.

The captain gestures to one of the fishermen squatting on the stern. At that motion, the fisherman yanks on the cable and revs the outboard to life. Black water gurgles up behind and the engine pushes us out into the open port and past the seawall.

The water is smooth and the waves do not even break. They are just swells in the surface as we coast along with the palm-lined islands rising up on our right.  These are the remnant shells of an ancient volcano and an echo of what the mainland used to resemble before post-colonial concrete and tin roofs sprawled across the landscape. The sea fills our view and we forget the city quickly.

“Yes,” Fassiney nods. “It’s the dry season. We fishermen love the dry season! Waves are small. You get waves in the rainy season, oy oy!” He sticks out his hands, waving them up and down to illustrate the tossing of the boat. “We Africans, we confuse God. While farmers praying for rain, fishermen praying for sun!”

“But you go out into the water in the rainy season? When the water’s rough?” I ask.

Fassiney nods again. “But we not resting! We taking out water the whole time.” Fassiney picks up the bailing bucket and strains with imaginary effort.

Eddie nods his head. “One time I was out there in the deep ocean. We were fishing for snapper. We went out for four, five days. Mr. Jett, I thought it was the moment I was going to die. The boat went up one wave,” he leans back for emphasis, “And then the boat goes down the other.” He lurches forward and for a second I imagine cresting a monster in a wooden boat like this with just an old plastic jug for a bailer.

“Mr. Jett, I thought I would die,” he says again and I believe him. “We took turns emptying the water. The man in the front bailed and the other men hung onto him. When he got tired, he passed beneath our legs so not to fall out and he took the last position. Then someone else took a turn bailing water. We lasted like this for six hours, up and down, rain and waves. That was my last day as a fisherman.”

I want to ask Eddie about the other men, if they kept up with work. I wanted to ask if he’s lost friends like that, but you can’t ask this question. Someone can only tell you the answer.

Go to Part II: On the Water in Guinea

Jett Thomason works for the U.S. government managing small agricultural development projects in Africa. A former Peace Corps volunteer in Uzbekistan, he has worked in Afghanistan and Iraq and traveled extensively in Latin America and the former Soviet Union. In his current job, Jett copes with responsibility and limited time for indulging wanderlust by writing the occasional blog entry and travel story.