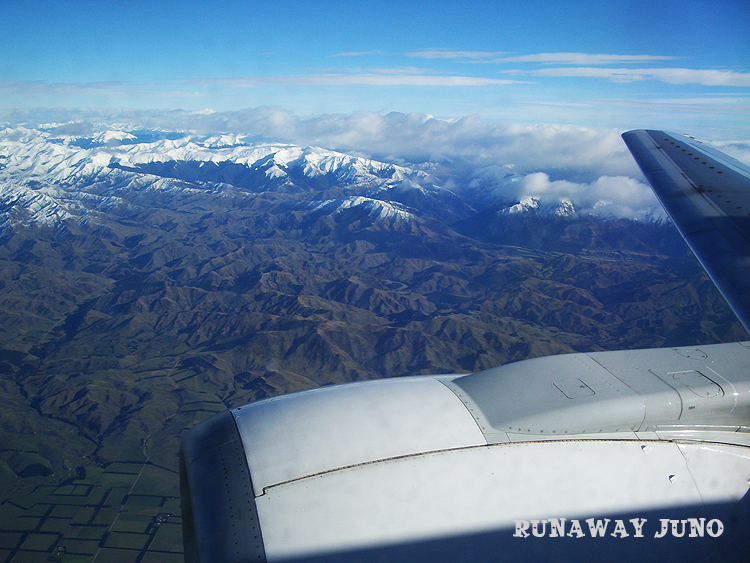 This week’s Photo of the week comes from Juno Kim of RunawayJuno.com

“Do you have any window seat left?” is the typical question I ask at the ticket check-in counter. Like many other travelers, I prefer a window seat. Maybe because it’s slightly more private than an aisle seat, or I don’t have to move unless I desperately want to go to the toilet, but mostly I like it because of the view. The view outside of the tiny window frame could be less inspiring and looks similar after several flight experiences. I mean there are always houses, farming areas, mountains, rivers and the ocean.

However, the flight from Auckland to Christ Church, New Zealand was more than just looking outside and enjoying the fact that I’m flying. The Southern Alps—that’s what make this flight very special. As soon as we flew over the point where Wellington would be, snow-covered shiny Alps were showing their faces between the clouds. It was just stunning. The pilot and flight attendants pointed out and admired the view with us the whole time. It was July, in the middle of the winter in southern lands, and already it snowed a lot before I had arrived.

Text and Photos by Juno Kim

Juno recently became an ex-mechanical engineer, a perpetual backpacker and of course, a full-time travel blogger. She is currently traveling and writing her own way in the United States. Follow her at twitter @RunawayJuno  and Facebook Fan page. Juno Kim is a travel blogger, photographer, and former mechanical engineer. She left her cubic farm to retrieve her creativity and inspiration. A firm believer of serendipity, astronomy enthusiast, and living by passion and love in life. Currently, on a quest to find the place where she can call 'home' and publishing her work on RunawayJuno.com and various other media channels. Follow her on Facebook, Twitter, and Instagram @runawayjuno