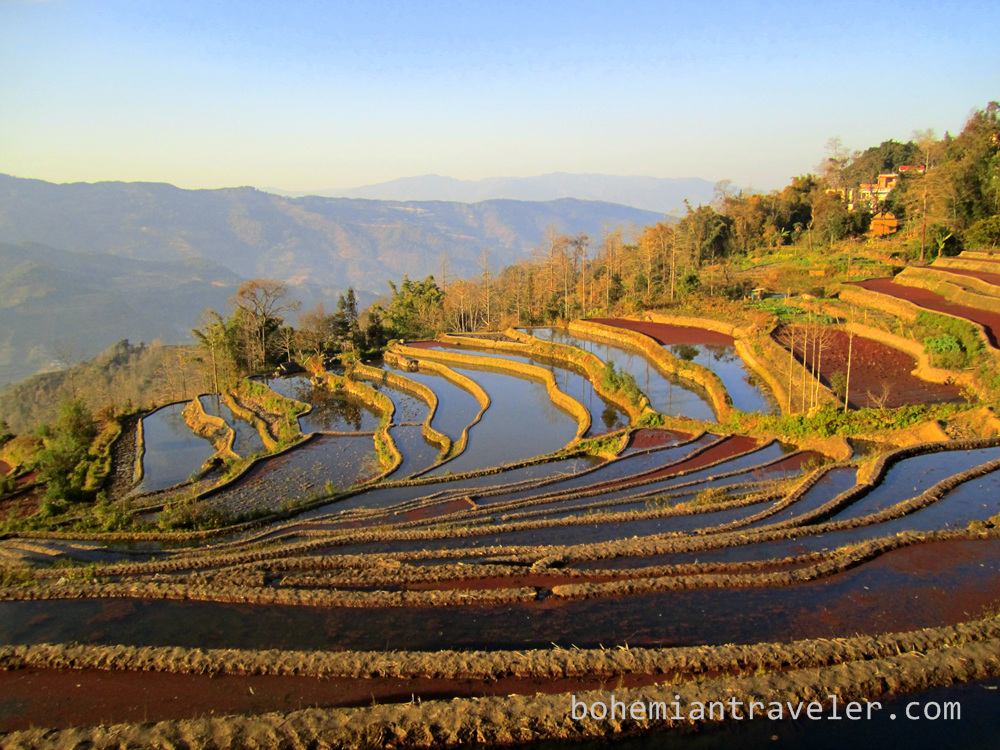 Commercialization has come to the rice terraces in Yunnan, China. There are now entrance charges to the platforms to view the terraces in places where they are most spectacular. One can imagine this will ultimately lead to the Chinese government paying farmers to simply manicure these rice paddies instead of farming them as they have in the past. This form of tourism caters to Chinese tourists from the cities with fancy cameras and tripods.

To avoid the entrance fees and have a more organic experience I decided to walk. I headed out of Chen’s Family Guesthouse with the name of the hamlet ‘Longshuba’ written on a piece of paper in Chinese. Folks along the road guided me down a car-wide track, sometimes dirt, sometimes improved with rough cobblestones. I was passed by locals walking, teenagers three to a motorbike, and rickshaws filed with passengers.

Four kilometers down the road I walked through Longshuba. Soon after, the terraces started to appear on each side of me. In the winter, they are flooded. It is said that this is the most beautiful time of year, when they reflect the sunlight. Farmers can control the water level in each terrace. Some years, a handful of terraces are left fallow.

I continued walking through another hamlet with houses bunched together. Hens and chicks scratched for bugs wherever there was dirt, meat dried on lines tied on rooftops over chili peppers and corn. Kids played on a swing that was built from bamboo, rope, and rubber tires. I wandered just past that where the track narrowed and I met a water buffalo with a bell around its neck. An old man passed me with a bundle of firewood tied to his back. Just beyond this point I found the longest most graceful terraces.

The next morning I left town on the 7:30am bus. As it rolled along the twisting mountain road, a layer of clouds were visible below us. Along this route we passed many of the viewpoints that charge an entrance fee. Tourists and photographers were out catching the sunrise and morning light.