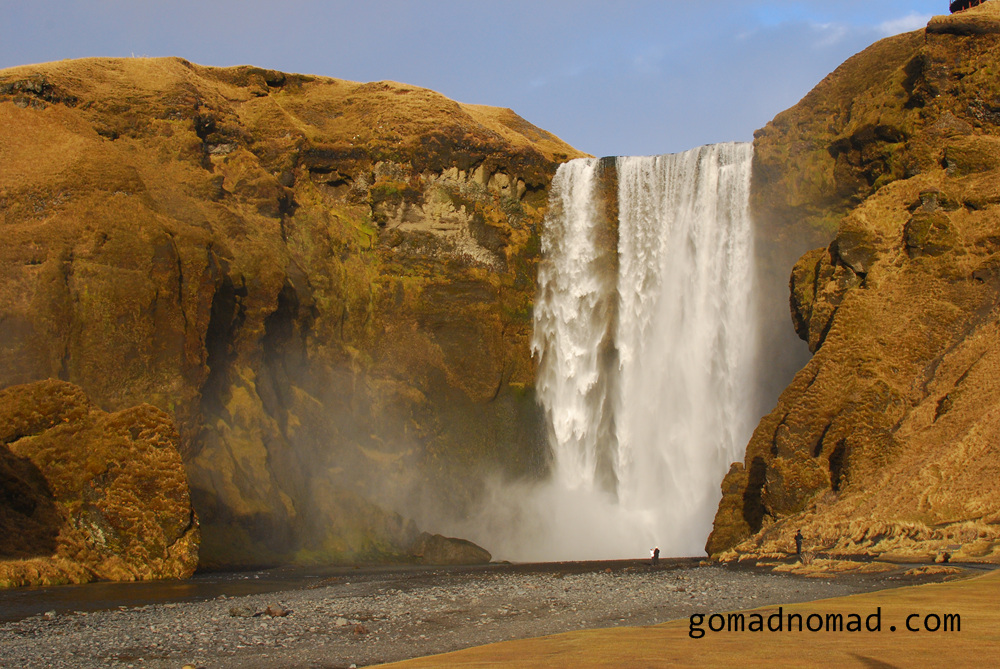 What I love most about Iceland is the splendor of the landscape. You’ll just be driving along the Ring Road and you’ll see an amazing waterfall and pull over. This one, in the southern part of the country, a couple hours drive from Reykjavik, is called Skógafoss.

Actually if you keep driving you’ll see lots of others, most notably, Seljalandsfoss. Why so many waterfalls here? These cliffs are the former coastline. After the coastline receded about 5 km from  here, the former sea cliffs remained, parallel to the coast stretching for hundreds of kilometers. Runoff from the Eyjafjallajökull glacier supplies an endless stream of water plummeting over the waterfalls.

The Skógafoss is one of the biggest waterfalls in Iceland with a drop of 60 m (200 ft.) and a width of 25 meters (82 feet). A rainbow is often visible here on sunny days due to the amount of spray the waterfall consistently produces. The green grass surrounding it makes it one of the most glorious scenes in the south.

The waterfall is located at the village of Skógar, which sits below the cliffs south of the Eyjafjallajökull glacier. There is a folk museum, Skógasafn, which contains some fine examples of the traditional sod-covered houses. This village of roughly 25 inhabitants was greatly affected by the eruption of the Eyjafjalla volcano in 2010. There is a small museum nearby where you can view a film illustrating the story of a local family.

Iceland Air now offers a hugely popular free stop-over on the way to Europe. This means you can stay for up to seven days in Iceland with no extra charge. When I searched for cheapest flights to Europe, Iceland Air consistently came up as the most inexpensive option from the United States.

On both my flights to and from Europe I took advantage of the stopover.  My main objective was to experience Iceland in different seasons.  Although Iceland has a reputation for being expensive, it’s not as bad as you might expect. Read my post about how to save money traveling in Iceland.

Text and Photo by Stephen Bugno

2 thoughts on “Photo of the Week: Iceland Waterfall Skógafoss.”