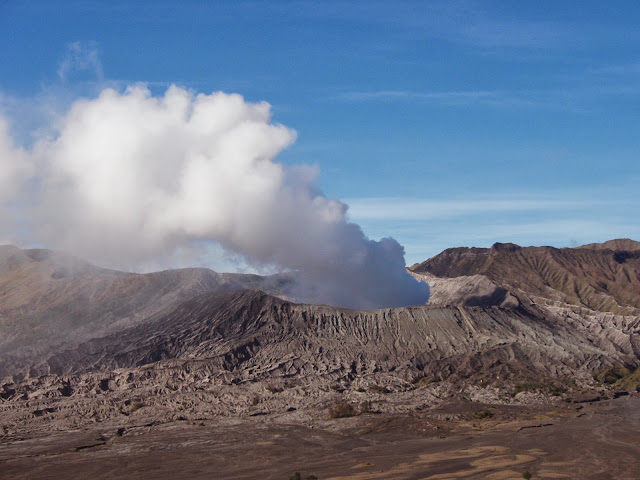 Indonesia has more active volcanoes than any nation on earth. Perhaps not surprising considering it finds itself being pushed and pulled at the whim of four tectonic plates. Journeys to the country reveal a land overseen by these giants, looming over the impossibly luminescent greens of rice paddies and jungle, a beautiful yet ominous testament to Indonesia’s position as laying prostrate to awesome nature.

Bromo Tengger Semeru National Park in East Java plays host to Gunung Bromo, an active volcano that can be visited up close and personal without need for serious climbing, but no less spectacular for it.

A convenient transport hub for journeys to the volcano is the city of Probolingo, a place that might be considered the antithesis of those damning glimpses of Indonesia as paradise. Memories will abide of a dusty bus station toilet that was actually a disused shower unit, where a blood red sign on the wall issued warning, Attention. No shitting. Only pissing. Not a picture likely to turn up in holiday brochures.

From Probolingo, buses make the trip into the mountains surrounding Bromo to the village of Cemero Lawang.

Cemero Lawang holds a precarious position at the gateway to the Bromo Tengger Semeru National Park. On one side it looks like it could tumble down the mountain slopes all the way back down to that toilet in Probolingo. On the other, it’s moments away from plunging down the vertiginous walls of the Tengger Caldera that surround Gunung Bromo. It is literally the end of the road.

Many of the stocky buildings here are painted in colorful pastel shades that offer an hallucinogenic contrast to the brooding grays of the late afternoon skies at this altitude. Local farmers, wrapped in poncho like shawls and bracing against the cold, carry the serious, weathered expressions of a life exposed on the mountain slopes. In fact, the whole scene is more high Andes than Bali and board shorts.

A sorry looking road climbs through the center of the village and leads under an arch that marks the entrance to the national park, just beyond which is a viewing area that provides front row seats from which the spectacle of Bromo and her sister peaks can be enjoyed.

Bromo sits in the center of a gaping volcanic caldera some ten kilometers across. The walls of the caldera are near vertical and drop to the bottom in a primordial green drama. At 2392 m, Bromo is the lowest of five volcanic peaks in the area. Its stunted height might be something to do with the fact that its top has been completely blown off in what must have been an eruption of Biblical proportions. A plume of smoke rising from the remains is a reminder that Bromo is yet to have found peace. The smoke is much whiter than the lunar gray of Bromo’s rutted slopes that sink into the Pautin Latir, or aptly named, Sea of Sands, that cover the base of the caldera. The whole scene looks like something you thought only existed in the movies.

To really capture the plain weirdness of the Bromo area, predawn hikes for summit sunrises are a must. Not such a pleasant prospect to be up at 4 am but earth shaking thunderstorms will probably prevent one from sleeping anyway and once you’re up and about, storm hangovers and sub zero temperatures soon give way to that sense of calm that comes with being out in the world when all others are sleeping. Just take care not to wake any ravenous dogs.

From the viewing area a steep road cut into the face of the caldera walls slips down to the Sea of Sands. At such an un-Godly hour the caldera is filled with a dense mist which exacerbates feelings of having departed from reality (and stepped into an 80’s pop music video). Visibility is minimal but rather than be unnerving it lends to the sense of adventure that we’ve come here for.

Through the mist, the gentle thumping of horse hooves can be heard, eventually emerging from the cover as their riders stoop to offer lifts to the foot of Bromo. However, it’s only a forty minute hike and the sense of calm so early in the morning doesn’t lend itself to rushing things. A well-beaten track in the sand ensures we’re not going around in circles.

Not far from the foot of Bromo is Pura Luhur Poten, a Hindu temple of some significance to the local people. Every year it hosts worshipers who come to pray before heading to Bromo in order to throw sacrifices into the crater (thankfully, not of the human kind, anymore).

Today though, there is no one around and in the given landscape the temple takes on a haunting character, with remains of the dispersing mist clinging to its silent pagodas. In fact, with the structure emerging from the sand, it’s easy to imagine Pura Luhur Poten having been left to ruin by a terrified people fleeing Bromo’s fearsome temperament.

Approaching the volcano’s base, we pass those same horses, scuffing the sand, with their charges quietly smoking cigarettes, waiting for tour groups to arrive in the next couple of hours.

There are 250 steps that climb to the edge of the crater. To the left, the sun is beginning to rise and highlights the edge of the earth with a rich, volcanic orange glow. It’s a sight that warms the cockles so to speak and puts an extra spring in our steps to the top. The ridge circling Bromo’s crater is only a few feet wide and the walls are steep so care is taken not to sacrifice ourselves to satiate Bromo’s wrath. Down below smoke rises from a small hole in the center of the crater and thankfully seems not to want to spoil any views of the sunrise.

It turns out we’re not alone up here. A young Japanese traveler has beaten us to it, but that’s OK. This is after all, a volcano that, legend has it, helped bring 25 children into the world (although the last one was sacrificed), and is to be found on one of the world’s most populated islands. Yet, Indonesia is a place where nature lunges to the fore, sometimes to devastating effect, and up on the summit of Bromo, you can catch a glimpse of the world before people got involved.

Stay Informed – Gunung Bromo is a feisty one and is prone to the odd eruption. The Indonesian Center of Volcanology and Geology Hazard Mitigation keeps an eye on things and will issue warnings to stay away if necessary. Stay informed – ask locals, tour operators and accommodation hosts for the latest situation.

Avoid the Crowds – Most tours to Bromo take in the sunrise from Mount Penanjakan, above the edge of the Tengger Caldera before heading down to Bromo. If you want the Sea of Sands to yourselves, go directly to Bromo for your sunrise. You’ll have a couple of hours before the tour groups arrive.

Be Prepared – Yes, most of Indonesia is hot and sweaty, but no matter which country you are in, at these altitudes things get very cold, particularly at night. Bring some warm clothes. The hike to Bromo is by no means serious, but there are plenty of other hiking opportunities in the area. Ditch the flip-flops.

Stay – There’s room to accommodate everyone in Cemero Lawang.  Further down the slopes there are accommodation options catering to higher budgets.