A growing trekking destination, the Central Asian state of Kyrgyzstan’s rugged mountains and verdant valleys are becoming increasingly popular among independent travelers looking to experience pristine nature and local culture. While traditionally independent international trekkers have stuck to a set few routes around the cities of Bishkek and Karakol, a number of smaller settlements around the South Shore of the country’s Issyk-Kol lake are developing as alternative hubs for trekking on newly-marked routes into the central Tian Shan mountains. One of these, the small village of Jyrgalan around 50 km to the east of Karakol, is the starting point for the photogenic ‘Boz-Uchuk Lakes’ trek. 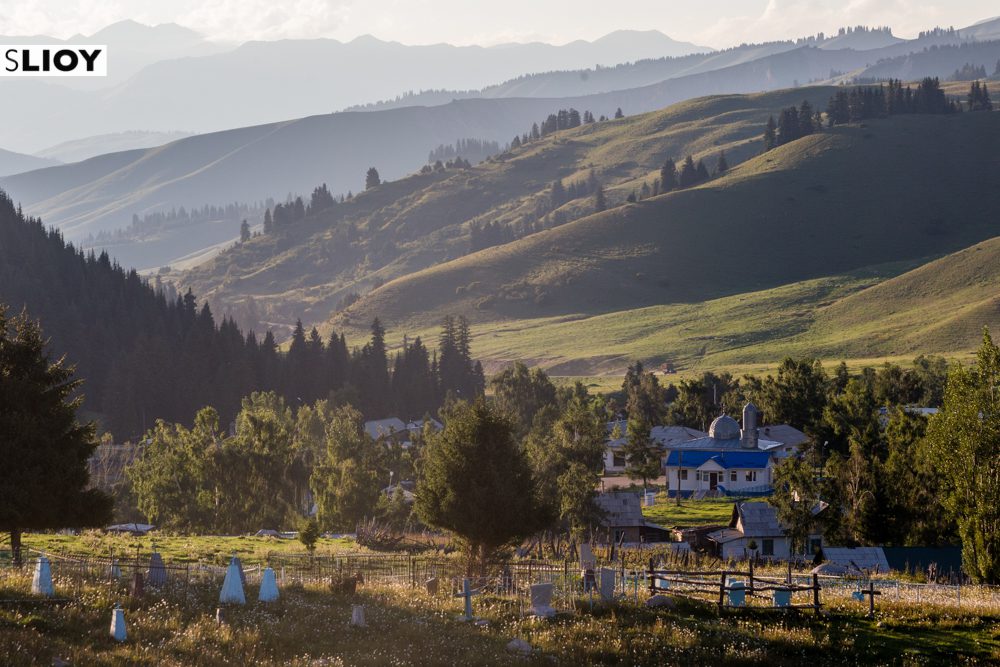 This village of around 100 people, accessible from the city of Karakol on four daily marshrutka busses ($1 per person), has begun to recast itself as an ecotourism destination catering to trekking and horse riding during the summer months and free-ride backcountry skiing during winter. Originally founded as a coal mining town during the Soviet period, the closure of most of the mine’s operations has seen the local economy long-dwindling and economic opportunities for the villagers very few. With the recent renovation of a number of houses in the village as guesthouses, and increased services and gear rental to cater to the needs of outdoors-minded visitors, the tide seems to be turning in favor of this remote rural community.

As nice as the background story might be, though, it’s only of interest to tourists if the mountains match the hype – and from first glance, they definitely do. 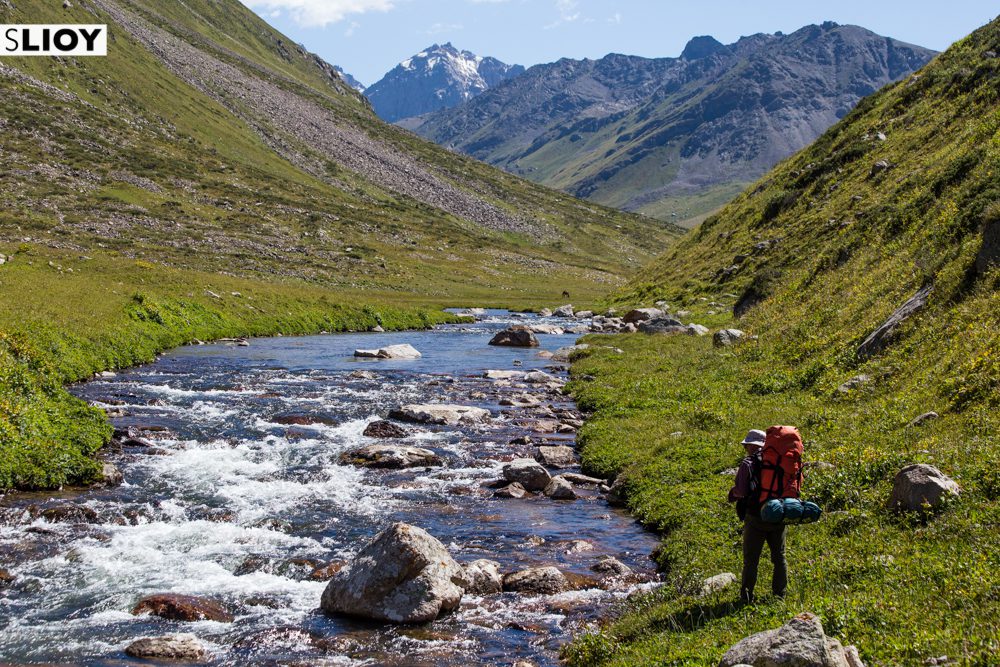 Though not the most epic of routes available from Jyrgalan, the first developed is the ‘Boz-Uchuk Lakes’ trek, a three-day two-night hike up two valleys and two passes, culminating in a visit to two still lakes reflecting imposing craggy ridges on the final morning. Best of all, like every one of Jyrgalan’s new trekking routes, it starts right out of the front door of your guesthouse.

Heading up the eponymous Jyrgalan Valley, the walk to the Boz-Uchuk Lakes starts with a gentle climb up past yurt camps and jeep tracks alongside the Jyrgalan river before turning back southwest to trace the Terim-Tor Bulak, a small tributary. In spring and early summer, snowmelt from the surrounding mountains feeds this stream and the numerous small ponds that dot the valley as it climbs to the first night’s campsite around 3000m.  An easy and beautiful first day, but with a 3467m pass looming over the campsite there is certainly some foreshadowing that day 2 will be a bit tougher. 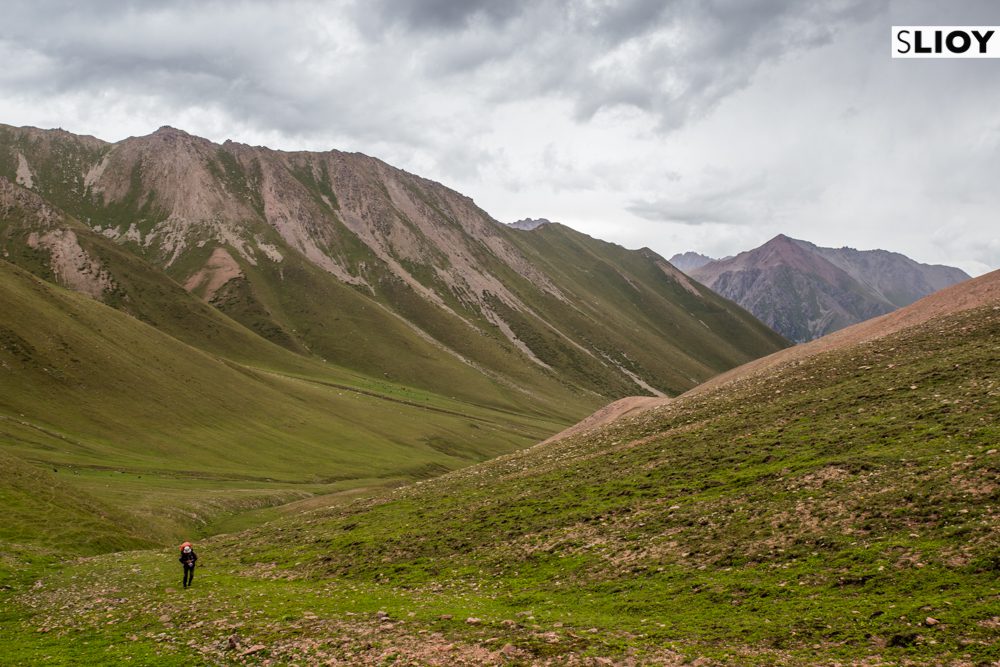 Indeed, tougher it is, not only because of the first pass but because the trail then descends all the way to the Terim-Tor valley floor before climbing – again- to another at 3362m. Along the way are more yurt camps, towering mountain views, and on clear days layered rows of peaks that seem to stretch all the way to Khan-Tengri Peak and Kazakhstan beyond to the east. Finally settling into camp in the Boz-Uchuk Valley, however, it’s easy to forgive hikers whose first thoughts are for their burning calves and growling stomachs after a long day of elevation gain and loss. Though only a hint of what yet awaits can be seen from the campsite on day 2 of the hike; the next morning will reveal a hidden upper valley of sparkling lakes, grazing horses, and sweeping panoramas of the Terskey Ala-Too range to the north – and, once more, Kazakhstan beyond. 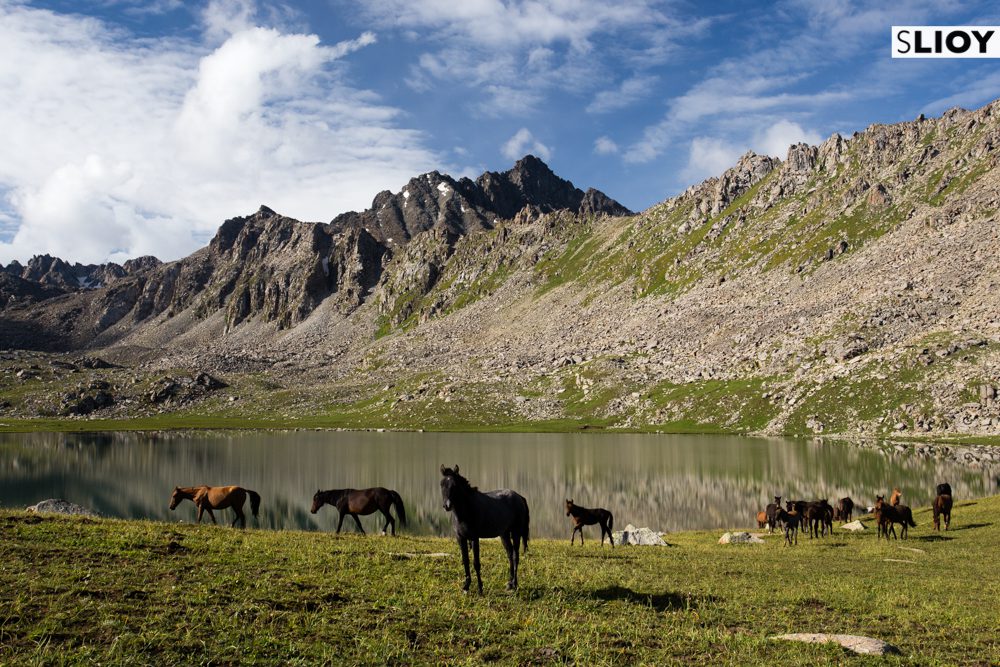 Out of sleeping bags early, into the still-blue light and the crisp mountain air, sleepy legs take time to warm up to the steep ascent to a hidden valley above. Standing on the cusp a short climb later, though, all thoughts of bed are forgotten as a pristine scene unfolds. Horses graze and run in the early light, and a pair of lakes just beyond reflect the rough rocky ridges that encircle the small plain. The first and larger pool’s contours invite hikers to trace the edge and view the reflected grandeur of the surroundings from higher and higher as the path rises, culminating in a towering outcrop from which the lower valley feels far far below.  Just behind, a smaller lake’s less-impressive volume is more than made up for by even more stunning surroundings; rock falls, snow-dappled crags, and just the faintest touch of green to give color to the grey rock. This moment and place alone are worth the trek, though further passes and promises of lakes and peaks and temptation far beyond still beckon to further exploration. 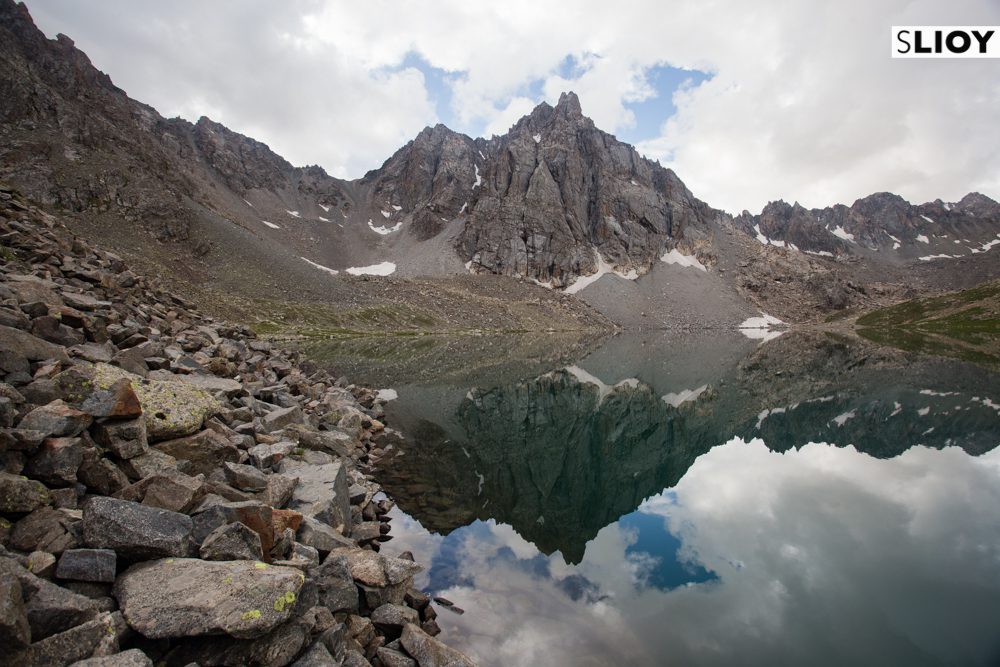 Descending back to camp and breakfast, it’s a few hours down the Boz-Uchuk Valley to the trailhead at the nearest road. From the village of the same name it’s either east back to Jyrgalan and one of at least eight other hikes being plotted in the surroundings, or west to Karakol and on to the rest of Kyrgyzstan.