In my travels throughout Spain the last few years I have been intrigued by the many sites associated with the Knights Templar, with their peculiar architecture and varied locations. Consequently, my curiosity regarding this mysterious half-religious half-military order had grown.

So while traveling through Portugal recently I decided a visit to their extraordinary headquarters—the Convento de Cristo, or Convent of Christ would certainly be in order to try and shed some light on their mystique.

Choosing the small city of Tomar, about two hours north of Lisbon, the Knights Templar established their religious headquarters and military stronghold in 1162. Here the fortress-cum-monastery, sits imposingly, perched above town, impressing and intimidating those in the old city below. 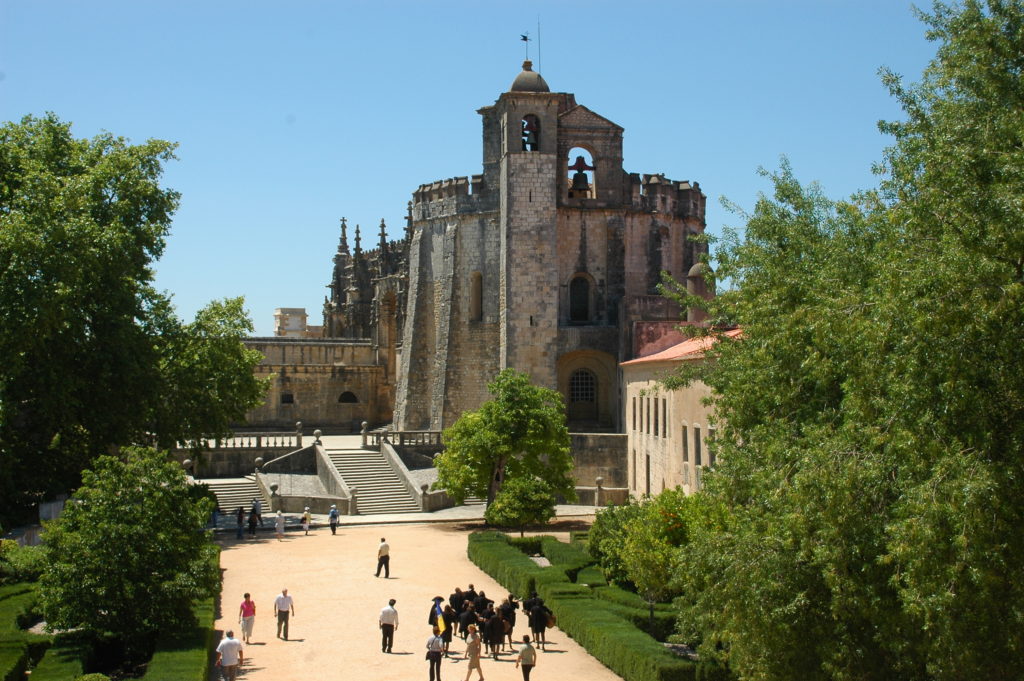 The First Crusade and Re-conquest

The Templars were formed in the aftermath of the First Crusade of 1096, with their original purpose to ensure the safety of Christian pilgrims en route to Jerusalem and to safeguard the Church of the Holy Sepulcher. A later objective was to expel the Moors from the Iberian Peninsula while providing the local inhabitants with military security.

By 1249 the re-conquest of Portugal was complete, and consequently the Knights Templar reaped tracts of land and networks of castles throughout the region. Their power and wealth was soon a threat the European monarchs.

Heavily pressured, Pope Clement disbanded the Knights in 1312 and soon after Portuguese King Denis cleverly replaced them with the Order of Christ, which inherited the Templar’s assets in Portugal.

Thus, the mighty Convento de Cristo came under the Order’s control. The vast complex, including the charola, cloisters, dormitories, and gardens embrace several styles of Portuguese architecture from the 12th to the 17th century, and showcases the finest examples of the exquisite Manueline design.

My visit began with a walk through the fortress walls and into the garden. As I approached the charola, I admired its round construction, supported with buttresses rising up to a battlemented terrace, giving it a castle-like appearance from the outside. Like most circular churches, it was modeled after the Church of the Holy Sepulcher in Jerusalem.

There’s no mistaking the purpose of the charola from the inside however. A 12th century, sixteen-sided, fresco-covered rotunda contains a centerpiece two-story octagonal prism which holds the high alter complimented by wooden statues of the prophets and painted scenes from the life of Christ. This is the sacred heart of the whole complex, and it was here, I imagine, the knights drew their religious convictions. 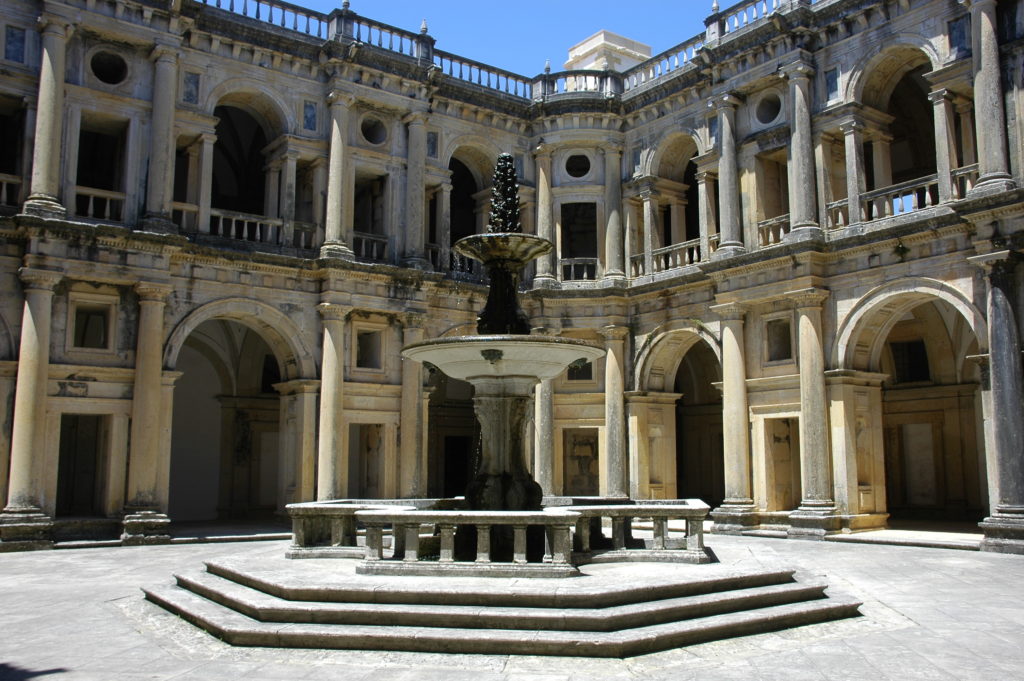 An archway connects the charola to the nave of the church, built in the early 16th century on two levels, split into the choir and vestry. The crowning highlight is the sculptural adornment on the west façade in the Manueline style—two corner buttresses and the beautifully ornamented chapter window. Manueline art suggests the Age of Discovery with maritime motifs such as sailors, buoys, sails, coral, seaweed, and ropes.

From the church I stepped out into the Main Cloister, a masterpiece of Renaissance Neoclassicism and without doubt the most spectacular of the cloisters. Inspired by Italian architecture, it has two stories, displaying Greek columns and gentle arches. This cloister, just one of seven others in the complex, was built to connect the church to the monk’s dormitories.

From Headquarters to Monastery

It was João III, in the mid-16th century, who put the convento in Convento de Cristo with the addition of monk’s cells, dormitories, kitchens, refectory, offices, and four new cloisters. A strict monastic life would be the standard following this point. The site would remain a monastic community until it was forced to terminate in 1834.

The convent then fell into private hands and was even used as a military barracks until it was purchased by the state in 1936 and was declared a World Heritage Site by UNESCO in 1982 after major restoration work. 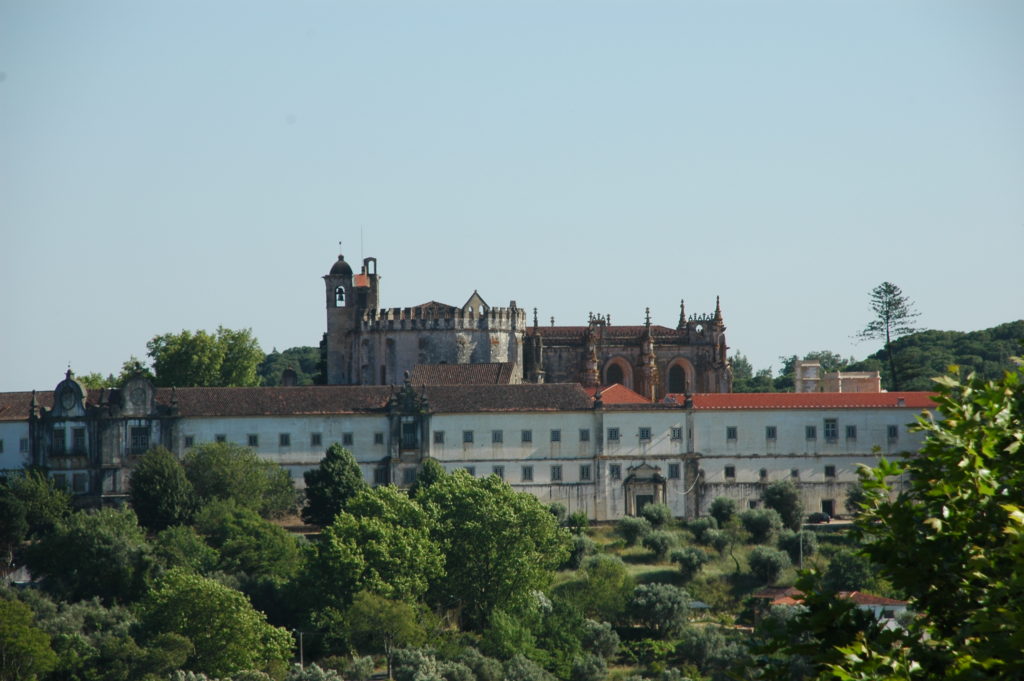 The Convento de Cristo entwines the most outstanding religious, military, and imperial features of Portuguese history and what remains today illustrates the pinnacle of wealth, prestige, and power that the Knights Templar once held. A visit to Tomar allowed me a peak into their curious and enigmatic history.

Tomar is easily accessible from Lisbon or Porto by car or train. Hours: daily June-Sept 9am-6pm; Oct-May 9am-5pm. From the center of Tomar, it’s a 15 minute walk uphill to site.