I had just finished planning and running a boys camp at my lyceum. With the summer mostly wide-open, I’ve been trying to see the interesting sites that get neglected when you actually live in a historical place. My most recent touristy visit was to a minaret in the nearby town of Shiforkan. The minaret is one of the tallest in Uzbekistan and might be the most overlooked of all the tourist sites here. From the main highway, the tower is visible for about thirty seconds. Many locals are unaware of its existence, and frankly, most locals are unaware of the town of Shifokan’s existence. 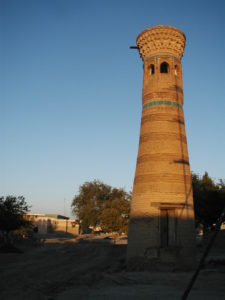 I arrived in Shifokan with two other Peace Corps volunteers who had worked at my camp. We strolled up to the town square expecting to find some sort of tourist information and the usual vendors hawking needless junk. Instead the minaret attracted about as much attention as a radio antenna. And from the looks of the top, there were several of those with wires stretching suspiciously into the offices of a nearby clinic. Access to the minaret appeared to be only through a locked door… about ten feet above the ground.

Not knowing whom to ask, we went to the nearest women selling newspapers. As I phrased my questions carefully in Uzbek, a man in line took one look at us and told us he could help. After going through The Conversation “Whereyoufrom whatareyoudoinghere areyoumarried howmuchmoneydoyoumake?” he took us into a small TV shop. One man was working in front of a pile of electrical boards with what appeared to be a piece of rebar and sparklers. Our guide explained the situation.

“They are Americans! They want to go to the minaret!”

“Hmm, they need permission to climb it from the mayor,” the salesman replied.

“Well, they won’t give you permission,” he told me.

“Well, I suppose we’ll go. After all, one has to respect guests.”

And with that sweeping comment on the culture of hospitality, he grabbed a flashlight, closed the shop behind him and led us around the corner. Away from the minaret.

I ignored this. Ignoring something blatantly wrong usually works here. As we walked down the back road, the guide told us the minaret hadn’t been opened for about three years. Too many people getting vodka and bright ideas into their head at the same time. After one too many drunks came down the tower the hard way, the minaret was locked up.

“But you’re guests, we’ll be quick and it’ll be fine.”

We knocked on someone’s door, asked for a ladder and went back the minaret. A small crowd of children gathered to watch from a safe distance. The ladder went up, and so did our guide. I scrambled up after him; the ladder was about a yard shy of the door. My friends followed. As my eyes focused, I saw that each step was about half a foot under dry but slippery pigeon guano. With the flashlight, we crawled up the very cramped and dark stairs. About a dozen nests with pigeons were laid out all the way up the path. Who’d of thought I’d have to come to Central Asia to see my first baby pigeons?

A few steps were rotten and there were a few close calls. As we got closer, more light came down the stairs. Suddenly there was the roof and open platform.

I’ve been on many high buildings in America, but the several minutes it took to get to the tower top made it feel much higher. Shiforkan had just been a dull place in between other cities I wanted to be in. This view changed all that. We could see far across the flat irrigated fields. The town was small enough to see its boundaries in sharp relief. House courtyards were suddenly open into view. We could quickly see and understand the town, see all the people in the streets and houses doing their work.

I imagined how many centuries this had been used to call people to prayer. And now it was mostly a TV antenna booster. Just then the TV repairman yelled at us to hurry down. We snapped some pictures, took one more look at the amazing view, and then walked back down into the normal, unremarkable town.

Jett Thomason was a TEFL volunteer in Uzbekistan from 2002- 2004 in the United States Peace Corps. Since then, he’s worked in Afghanistan and Iraq and traveled extensively throughout Asia, Europe, and the countries of the Former Soviet Union. He is currently pursuing a masters degree in public policy from Georgetown University in Washington, DC.