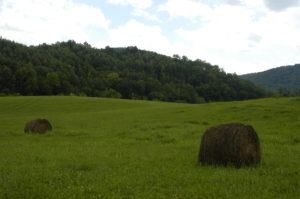 Learning vacations are now more popular than ever; from Thai cooking schools to studying Spanish in Guatemala to practicing meditation in India. But how about somewhere a little closer to home and a place you can still get a rich cultural experience as well?

The answer: The John C. Campbell Folk School. Whether it is mountain dulcimer, digital photography, or quilting, you will find something of interest among the 860 courses offered.

Located in the scenic hills of western North Carolina, the school, a registered non-profit situated on a serene 300-acre property in the hamlet of Brasstown, specializes in courses rooted in the traditions of southern Appalachia. But it offers a fine selection from other cultures of the world as well.

I initially made the trip to Brasstown for a week-long Southeast Asian cooking course. The class tackled the appetizers, main courses, desserts, and drinks of Malaysian, Indonesian, and Thai cuisine. “And we cover Indian and Chinese as well, because they are the foundations of Malaysian cuisine,” added our instructor Mary Lou Surgi. She would know, too, having lived in Southeast Asia for several years following a two-year stint as a Peace Corps volunteer in Malaysia.

Based on the concept of the Scandinavian folk school system, the Folk School is geared towards the development of individuals and their communities by offering courses in performing arts, agriculture, and crafts. Since 1925, the school’s well-established reputation has attracted both students and instructors from across the U.S. and even from overseas.

After my course finished, I ended up staying a couple more weeks after meeting lots of friendly folks. The overwhelmingly positive attitude by both students and instructors alike really grew on me.

And I’m not the only one. “One of the best things about being at the folk school is the community in Brasstown. Everyone is so willing to help out with whatever you might need and everyone gets together to socialize often.” says Emily Derke, a 21-year-old from Minnesota. 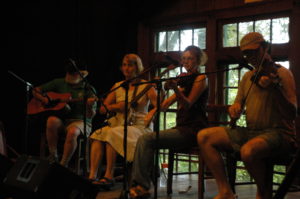 She came for a nine-week work/study program, and reckons it might not have been enough time. Work/Study students live at the Folk School and in exchange for each two-week work period, they take a one-week class of their choice. This provides an alternative to paying the normal registration fees and allows you to linger in the community longer and become a temporary local.

It isn’t by chance that such strong community bonds grow here. The recipe: plenty of knowledgeable, creative, and passionate people mixed together with lots of positive energy. Simple things like having home states printed on nametags, helps everyone get into conversation at mealtimes.

Another alternative to coming as a student is applying to become a host. The student hosts live at the school for a six-month period, and are responsible for making sure that students have a good experience. In exchange, student hosts may take classes each week. At any given time there are two hosts. They can be found running around the campus doing odd jobs like answering phones after hours, carting tables and chairs for events, or making mealtime announcements.

Most people, however, be they professionals from Atlanta or Raleigh or die-hard knitters from Vermont, come for the week or weekend-long courses.

Although he was busy teaching for the week, I found time to catch up with Norman Kennedy, a world-renowned weaver and folk singer. During an evening program we listened to him sing traditional Scottish songs. “They used to sing these while they were working in the mill or factory” he explained. Surprisingly, audience members jumped in when they could to enhance the chorus. No doubt he’ll be back for Scottish Heritage week at the end of the summer.

After a needs assessment in the rural south in the early part of the last century, John C. Campbell and his wife, Olive Dame, talked of establishing a school based on the concept of the Scandinavian folk school system. The school would be an alternative to the higher-education facilities that drew young people away from the family farm. 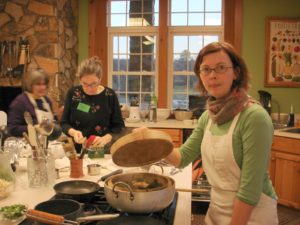 John never lived to realize their dream, but after a visit to Europe in order to study the folk school system, his widow and her friend, Marguerite Butler, established this one in 1925 in his honor with popular local support and in-kind contributions. Nearly a century later, the Folk School continues its mission towards the development of individuals and their communities in a non-competitive environment.

The Folk School earned its spot in National Geographic’s 100 Best Vacations to Enrich your Life and I was amazed to find young and old, from all economic classes mingling and sharing genuinely good times together, be it at meals, walking around campus, or hand-in-hand on the dance floor.

One of the unexpected pleasures of the week was an introduction to contra dancing. After being dragged onto the dance floor against my will, it only took an hour before I didn’t want to leave. The live old-time music and dance caller was definitely the highlight.

Also part of the weekly program is Friday afternoon’s much anticipated “show and tell.” It’s a time to gather and show off the fruits of the week’s labor. As I drifted around the room with samples of quickly-disappearing vegetable curry puffs, I admired the quilters’ patterns, the woodcarvers’ creations, the elegance of the stained glass, and enjoyed a live performance from the mountain dulcimer class.

During my few weeks in the area, I acquired a greater understanding and deeper appreciation for traditional Appalachian culture. Besides the contra dance, I also caught the Asheville-based old-time string band Blue Eyed Girl for a fantastic show, featuring local, Annie Fain Liden on the banjo. The community gathers for free weekly concerts of bluegrass, old-time, or folk music.

Originally I went to learn a cooking tradition from half-way around the world, but ended up taking home an appreciation to the Appalachian culture that I didn’t even know existed in my back yard. And I took with me the much more important lesson of the importance of how a sense of community can enhance our life back home.

The John C. Campbell Folk School is located in Brasstown, N.C., about a 2-hour drive from Atlanta, and offers 860 courses rooted in the traditions of Southern Appalachia and other cultures of the world. A free history center and archives, free weekly concert series, seasonal festivals, bi-monthly dances, a craft shop, and nature trails are all located on the premises. If you are not taking a course, the school is open to the community and welcomes visitors for self-guided studio tours. Courses are offered all year and run from $512 for week-long and $290 for weekend courses, plus materials fees. Room and board starts at $402 for 6 days. For more information see www.folkschool.org.

Stephen Bugno first journeyed to western North Carolina in early 2009 and hasn’t left yet. His writing has appeared in The San Francisco Chronicle, The Philadelphia Inquirer, Transitions Abroad, and the Matador Network.