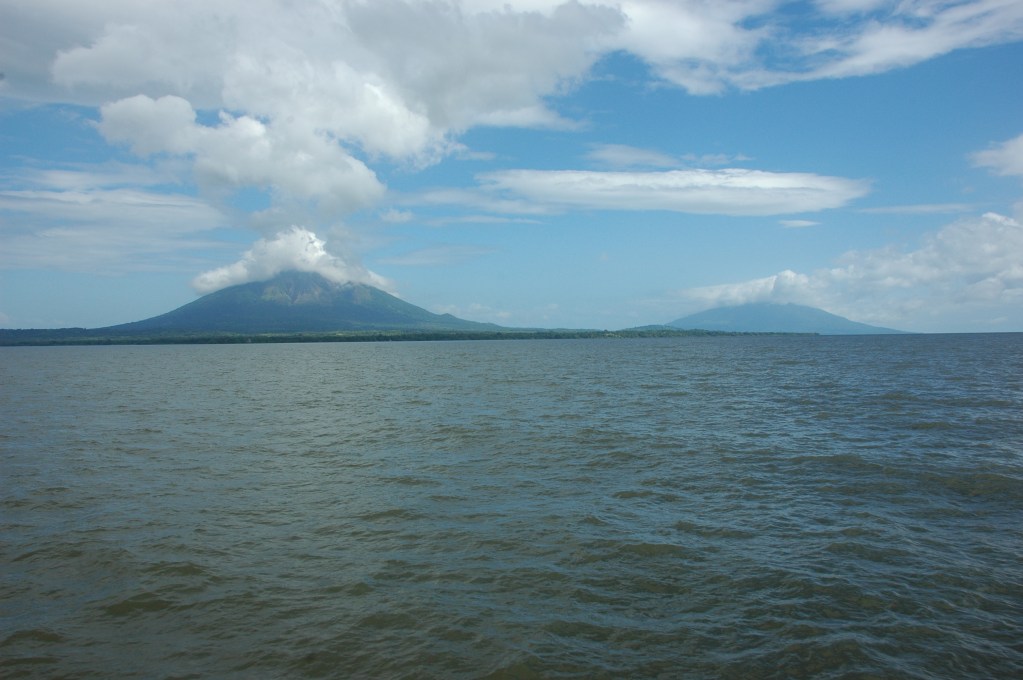 We got a fresh start on December 1 out of San Juan del Sur, juiced up at Margarita’s restaurant and hopped on the chicken bus, like in the movies, right as it pulled out of town. We slumped into a sticky plastic seat and low and behold, our Japanese surfing friend was sitting across the aisle. ¨Hey! How have you been?¨ He asked. ¨Well….¨ We told him what happened during the twenty-four hours since we had last seen him. ¨Oh. I´m sorry to hear that,” he said. “Did they let you keep your memory card?¨ Somehow it´s so easy to cross between serious and comical and his comment was just enough to push us over into laughter. The memory was still too fresh in my mind and I flashed back to the terrifying moment the men advanced on us, covered their faces with their t-shirts, and flashed the foot-long butcher knives. ¨No, surprisingly they didn´t give us that option.¨

In Rivas we got off the bus in the middle of what I see as chaos, but is actually the open market. ¨¿Donde esta la iglesia?¨ The answer came in the form of “4 north, 2 east” which meant we responded by going in the direction where he pointed, and turning in the direction where he pointed. Once in front of the church we marveled at the activity surrounding the square. The open church stood empty and upon entering I felt like a ghost in an unattainable story. An ocean scene depicting sinking ships and crying people adorned the dome. We found no material to read in order to make sense of it or of the history which radiated from the dilapidated building.

In San Jorge we boarded a ferry to Ometepe and sat in the first place with air conditioning that we´ve found other than the bank. Going without air conditioning is preferable to me and really, why should we have the choice anyway? Outside the window, the island became larger, and soon the view enticed me more than the soap opera on TV. I understood more of the story line, for that I give credit to my wonderful Spanish teachers in San Juan del Sur. I didn´t learn the right vocabulary for the show, however, but the actors repeated things more than once which lowered the comprehension level. ¨Te amo! Te quiero!¨

After we pulled in to the port, we got on a bus in Moyogalpa that was headed for Merida. Three hours or approximately twenty miles later, depending on how you want to look at it, we had circumvented the island and arrived at Hacienda Merida. For most of the drive, the bus was packed, chaotic, and hot. But as evening approached, the horizon turned a fiery red, Spanish rock music played on the radio, for once not too loudly, and the driver hustled the retired American school bus down the dirt road into the sunset. It was a few minutes of peace in the long day of travel. Houses and life of the land swept by, and I was no longer sweating, just sticky almost to a fly-paper degree. At the end of the drive, the bus driver waved us back into our seats while he turned the bus around and backed it up into a little alley way. Then they shooed us out the backdoor. I had a moment´s thought. We were approaching unknown territory once again and I hoped someone or something would be there to take care of us.

The sun rises at 5 a.m. and we rose at 6 with the birds. Before long, with a pack weighed down by water and sweet biscuits from a small roadside tienda we were saying hello to the pigs, chickens, dogs, horses, and children as we walked towards Cascada San Ramon. We were on the lookout for hmmm….a yellow? gate? Feeling one-half tourist, one-half investigator, we found it and on we went up into the mango and citrus orchard.

I could hear the water but couldn’t see it around each bend and nook. No water. Eventually we approached a river bed and snaking through the dusty rocks was a black pipe. Could it be, the whole river was being piped down to the village? We followed the pipeline until the trail crumbled into the river bed where, trickle trickle, came the stream. The sides of the mountains steepened and the river embedded deeper into the ground. Soon we were traipsing in a fern valley. At the fall, the water hurdled 56 meters off a smooth black rock wall into a small knee deep pool, more like a large puddle. On either side, ferns, moss and green goo grew under the mist. We waded in the moment.

4 thoughts on “On to Ometepe”