A Visit to the Zoo and Some Cultural Observations

Per suggestion of one of my lovely readers, last week I visited Parque de las Leyendas, a zoo in Lima.  A quick bus ride from my house and cheap admission, the trip was definitely worth it. But not because of the animals. 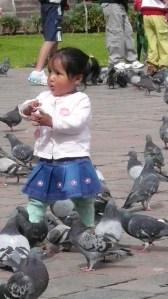 I can’t say Parque de las Leyendas would be the first or even 8th place (I have a list) I would take a guest of mine when they visit Lima.  Having been lucky enough to visit many zoos in my lifetime, I’m a bit of a critic.  Baltimore and Denver are my favorites so far.  At Leyendas you can find a surprising variety of animals.  Although I get the feeling that, like many things here in Lima, there wasn’t much of a plan when when they built it.  My guess is they constructed the zoo, put in some cages, and got whatever animals they could to fill them.

There were four lions, each in separate cages.  They were thin, possibly malnourished, and sleeping very soundly in separate, seemingly small cement cages with water bowls the size of Brandy’s.  I know lions usually sleep during the day (I’ve been to a lot of zoos), but there was something different about these lions.  The Bengal tiger was a different case.  Also thin, and in a small cage, he was quite active.  I found him quickly stalking back and forth groaning, as if pleading to the crowds to feed it or offer themselves as food.

When a little boy held up his small stuffed tiger towards the cage, the real one stared at it intently and let out a long, frustrated groan.  I heard this boy’s father tell him, “He’s hungry, he wants to eat you.”  My dad would have said the same thing.  For large animals, there were also water buffalo, zebras, and sea lions (also in very small tanks).  The animals that had the largest areas to roam (complete with grass) were the grizzly bears.  That’s right, Grizzly Bears in Lima!  They were struggling to remain in the shade of their one  and only small tree, moving closer to the trunk every 10 minutes or so to savor what little shade they had as the sun rose higher throughout the morning. 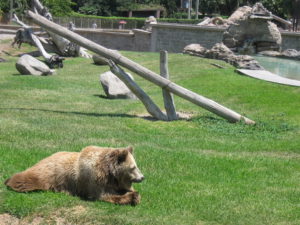 While Parque de las Leyendas is not the best place to go see animals behaving as they would in their natural environments, I found it a perfect place to observe Peruvian parents and their children in their natural environments.  It never ceases to amaze me how much you can observe about a culture when you are not completely familiar with the language.

When I think back to my fairly recent trips to the Denver and Seattle zoos, I cringe as I recall the behavior of certain families.  I remember kids whining to their parents to buy them toys or ice cream, screaming “he hit me”, throwing tantrums, or fighting with their brothers and sisters.  I may have behaved similarly when I was a kid, and my sister, Heather was definitely a brat.  I also remember several incidents of parents asking me to move (or some of the less polite ones pushing me out of the way) so their precious angels could see the animals.  Rarely did I hear “wait your turn,” or “let’s let the lady take a look, and then you can”.

In my three hours at Parque de las Leyendas, I did not witness a single tantrum.  Children did not ask their parents for ice cream or toys, even though there were ice cream carts and toy shops on every corner.  No whining, no bickering, no running off from their parents.  No brats!  Oh, and no parents looking like they wanted to pull their hair out either.  Wow, it sure made the trip a lot more enjoyable.  At one point I witnessed a father, not pushing me out of the way so his kids could see, but pushing his kids out of the way so he could take a look at the sea lion, which was in a tank smaller than my grandmother’s swimming pool. 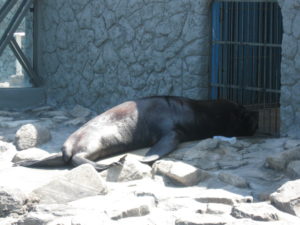 In general, the children who are raised here in Peru are better behaved than the children I have encountered in the United States.  This carries across the economic classes and I’m not quite sure why it is.  After asking around among my friends and a couple complete strangers, I’ve narrowed it down to two theories.  Personally, I think it could be a combination of the two.

1.  They use stricter parenting techniques.  A parent would never be taken into custody for spanking their child here in Peru.  They’ve got bigger fish to fry.  Many upper class families have nannies that essentially raise the children.  In those cases the children are subjected to the disciplinary styles of the nanny.

Having yet to observe children misbehaving here, I have yet to find out what happens when they do, so cannot give you much information to support this theory.  Although I recently read an article in Concord Monitor Online that made me think about different types of parenting styles.  It was about a mother in Concord, NH who kept her child out of school because they were reading a book she did not approve of.  The book addressed the topic of homelessness and it mentioned that one of the children lost a parent.

The mother argues “How am I supposed to address such sad topics with my kindergardener?”  This would never happen here in Peru.  It would be impossible for even the wealthiest of families to keep the existence of poverty a secret.  I live in one of the most beautiful neighborhoods in Lima, but can see signs of it every day.  I can’t imagine that this sheltering style of parenting would fly far down here.  Without being a parent, I would imagine that the best way to address the topic with her child would be for her to talk about it, but what do I know?

Another thing I see from time to time in the States are parents who are afraid of their children and what they might do.  Examples of this would be a mother of one of my friends growing up.  She made sure that every second of a weekend I spent there was structured with snack breaks, craft times, outdoor play, and bed times after which if she heard talking, we were separated.  God forbid we were allowed to come up with our own play ideas, or talk after bedtime…who knows what we could have come up with.

Another example might be the mom who accompanies her 7-year-old son into the dentist office for a cleaning.   She speaks to him the whole time to keep him calm, translating everything the dentist says into baby voice so her not-so-little precious can understand.  What would happen if she sent him in alone?  Perhaps it was the terrorism in the 80’s and 90’s that made the mothers tougher, or made them want to raise their kids to be tougher.  Whatever it is, I have not seen this same “fear” of children or need to treat them like glass vases.  Children are expected to behave and are not constantly tended to here in Peru.

2.  In the United States, we live a lifestyle of being able to get what you want when you want it.  If children want to watch TV or play video games, usually they have easy access to a TV with cable…if not in their house, than at a friend’s house.  Although we complain about cutbacks to education funding, a comparatively good education is far more accessible to children in the United States than here in Peru.  If families don’t have food/homes/money/etc., we have soup kitchens, food stamps, homeless shelters, and welfare.  If people can’t afford healthcare, we have Medicaid and social security.

Fifty-four percent of Peruvians live in poverty. If you think you know someone who is living in poverty in the United States, they have it 5 times better than someone living in poverty here in Peru.  I thought I knew poor through patients I’ve worked with in the United States, but I had no idea.  So, although we may not feel like it, especially with the economic whatever-they’re-calling-it-these-days, we live in a culture of excesses, of things we don’t need.  Perhaps this brings on a sense of entitlement to some of our children.

Admission to the zoo was the equivalent of $3.  Many families brought their own lunches which is perfectly legal.  The low price allowed for many less well-off families to bring their children too.  Perhaps the children knew that their parents couldn’t afford the extra toys or ice cream, thus keeping them from whining.  When I was growing up, I never asked my parents for a pet pony because I knew it was completely unrealistic.  Perhaps it’s just unrealistic for these children to think their parents would buy them a stuffed animal.

12 thoughts on “Grizzly Bears in Lima”