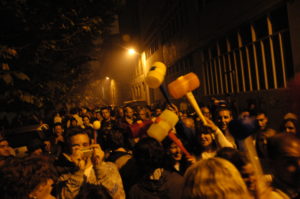 For one night every year, the city of Porto, Portugal goes absolutely wild. The celebration—Festa de São João—or Feast of St. John’s Eve, takes place on the evening of June 23rd and goes to the daylight hours of the 24th. On this night, seemingly the entire population comes to the city center and surrounding neighborhoods to honor John the Baptist and partake in the evening’s numerous traditions.

Although relatively unknown outside Portugal, Festa de São João is undoubtedly one of Europe’s biggest street celebrations. No matter their economic standing, age, or race, Porto’s citizens come out as equals to generate an unrivaled atmosphere that erupts in the city’s public plazas, squeezes through the steep, narrow, cobbled streets, and surges down to the river. 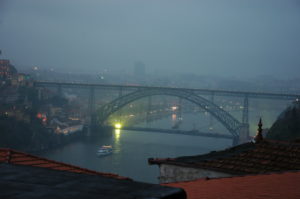 Throughout the evening, folks stroll through the packed streets pausing at carnival games, shop-stalls, and performance stages. Perhaps the most looked-forward to pastime is sampling the festival’s food: fried dough such as farturas and churros and pork sandwiches called bifanas. However, these are all second to Sardines—grilled and salted to perfection. Wash everything down with a glass of wine or beer—beverages not difficult to find at any bar, sidewalk stand, or vender the whole night.

Oddly enough, one of the stranger traditions of the festival is the hitting of each other over the head with plastic hammers that squeak; or if you prefer, dangling a leek for the initiated to smell. Where these traditions comes from, no one has an answer. 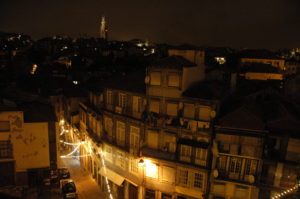 At midnight, all eyes temporarily halt to view to the huge fireworks display over the river Douro with the graceful Ponte Dom Luis I silhouetted in the background. Free concerts, complemented by spontaneous street dancing, continue simultaneously in various parts of the city. At some point during all this commotion, many stop to set off candle-powered, paper hot-air balloons into the night. At any given moment, a glance to the sky over the river will yield views dotted with the beautiful glowing balloons.

The Walk to the Beach

Traditionally, festival-goers slowly make their way by foot along the river several miles out to the beaches at the edge of Porto where a parallel, slightly alternative São João party is taking place. Here, out past the modern suburbs, young people continue dancing to the techno thump until well after sunrise.

The Portuguese like to say that “Lisbon plays, Braga prays and Porto works,” but on the night of Festa de São João, it is Porto that celebrates.

Stephen Bugno took part in the São João Festival in June of 2008 when he visited from neighboring Spain. For more than a decade he has worked, volunteered, and traveled his way around the world. He blogs at BohemianTraveler.com.