This week’s Photo of the Week comes from Suzy Guese of SuzyGuese.com. 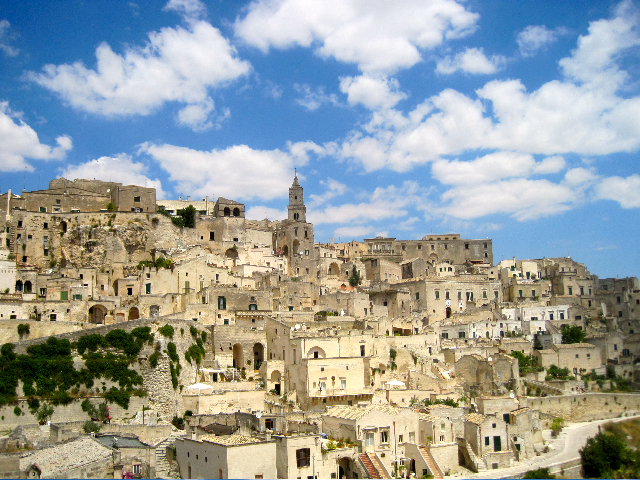 Entering Matera in the Basilicata region of Italy, in between Puglia and Calabria, was eerie to say the least. The town is said to be one of the world’s oldest, where settlements formed in caves, sassi, out of the natural grottos. In the 1950s, people started inhabiting the caves again due to extreme poverty, lending an infant mortality rate of 50%, a breeding ground for disease, and an Italian scandal of forcing residents into government housing schemes. To throw in a little more drama, Mel Gibson decided to film Passion of the Christ in Matera. I quickly found out why.

There was a chill to Matera, a quiet you couldn’t quite understand or think could possibly be in Italy, a country so rich in noise and chaos. As the sun beat down, the town glowed. A few Italian tourists here and there could be heard only by the snapping of their camera’s lens, opening and closing quickly. Then, the quiet ceased. A wedding procession began honking their horns, parading through town down to the church. Only for a moment did Matera seem like a normal Italian village, where a wedding can be seen in every quaint town on the weekend. Not a resident to be seen or real noise to be heard, Matera’s draws are not of beauty but a reminder of Italy’s impoverished and neglected South.

SuzyGuese.com showcases people and places from around the world not in the ordinary, travel guidebook sense. She is fascinated by the simple way a story can be told, usually with a little humor. Follow @suzyguese on Twitter and find her on Facebook.