By Danielle L. Krautmann
My senses are heightened in the rainforest.

Despite being legally blind in my right eye, I can see more clearly than ever before….maybe there’s just more to see.  Something as simple as sunlight illuminating a water droplet on a leaf is a vivid representation of the complexity of nature.  I look up to the trees and can imagine which leaf the drop fell from and how many leaves it rolled off before it landed on this one.  I look at the plant it sits on and hypothesize the path the drop will take to the ground and which of the surrounding plants, trees or vines will be nourished by it. This sense of sight can be heightened further with correct training.

Richard, a guide for Rainforest Expeditions (the company I’m working for), who specializes in birds told me how he became so expert at spotting them.  “Practice, Practice, Practice,” he told me.  He began by figuring out how far 20 meters was and practiced spotting birds and other animals.  When he felt good about it, he moved up to 50 meters, then 100 meters.  The other day I went for a nature walk with him and was amazed when he stopped walking, looked around, sniffed once or twice, then pointed directly at the bird or animal without
thinking twice.  I want to be able to do that! 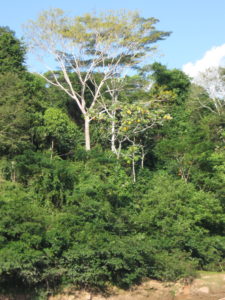 I hear birds calling back and forth.  Some chirp timidly, others caw obnoxiously, while occasionally I’ll hear a terrifying screech, only to figure out that was also a bird.  Tree branches fall, monkeys bicker, insects buzz all at the same time.  It’s loud, but I’ll take it any day over the non-stop noise pollution of traffic, horns and construction which permeates Lima and makes me feel like I’m on the verge of a nervous breakdown.

It’s really not that much quieter than Lima, especially in the morning, but its far more pleasant.  Trying to distinguish who’s saying what is initially overwhelming, but when I listen closely, I realize how harmoniously they come together.  It’s as if the all the plants species of the forest along with her animals are in collaboration, functioning exactly as they should be.

If I concentrate and sit quietly, I can listen in on a conversation between two birds.  On a walk today, I heard a rain shower five minutes before it arrived.  The sound of the raindrops hitting the leaves became louder as the downpour approached, giving me just enough time to find an umbrella tree to stand under while the worst of it passed.

I’ve always had a keen sense of smell, but try to suppress it in the city because the scents of food, diesel fuel, and urine do not appeal to me.  I had almost forgotten that to truly experience an odor you must use more than your nose.  It involves breathing through your mouth and using your sense of taste.  You must then allow the odor to infiltrate your entire chest cavity and head until it brings back a memory or creates a new one.  Guides here can smell Howler Monkeys from two miles away.  I’m not that good yet, but can appreciate the fresh air, jungle fruits and nuts, flowers, leaves, even dirt.

Then there’s another sense.  I’m not talking about that creepy movie with that little kid who hangs out with dead people.  It’s the same full body sensation you get when you first fall in love with someone. When I hike in the forest, no matter how hot it is, or whether it’s raining and I’m soaking wet, my energy increases and I could hike for hours.  Worries cross through my mind for no more than a minute before I’m distracted by a jumble of vines, trees and plants competing with each other for sunlight.  They wrap around each other, always moving upward in a beautiful chaos until they explode through the canopy spreading their branches in every direction to celebrate their triumph.  My worries are forgotten and I realize I’ve been
studying the forest for what feels like hours, but maybe was only seconds.  This sense is timeless and unquantifiable.  It’s the same as falling in love, only this time I’ve fallen in love with a place.

7 thoughts on “The Rainforest of Tambopata National Reserve, Peru”