Despite the serene beauty that proliferates  from the battlefields surrounding Gettysburg, Pennsylvania, the 6,000 acres has witnessed one of the most horrifically violent episodes of human history.

But 148 years after these battles of the United States Civil War, orchards have been replanted, hay is still grown and cut, restored cannons stand facing the enemy and 1,328 monuments, memorials, and markers—the largest collection of outdoor sculpture in the world have been left in tribute.

“People ask in town, ‘Where’s the battlefield?’ and I know they’re asking for the fields surrounding the town and the Visitor’s Center,” our tour guide at the Shriver House tells us. “But I want to tell them ‘This is all the battlefield. The town was the battlefield too.’” Confederates raged through town on the first day pushing the Union troops back south of town and for months after the townsfolk dealt with the aftermath of casualties.

But there’s more than just civil war history here. My favorite non-civil war site is the Eisenhower Historic Site—a 1950’s era home and farm where Ike and Mamie lived and greats like Churchill, Khrushchev, and de Gaulle visited. There are also over 14 outfits in town that give ghost tours—the newest craze to awaken in Gettysburg.

Stephen Bugno has just returned from Southeast Asia and has now set off to discover the places a little closer to home. Juno Kim, from Korea, has taken a break from her career as an Mechanical Engineer to see the United States for three months. She blogs at RunawayJuno.com and he at BohemianTraveler.com 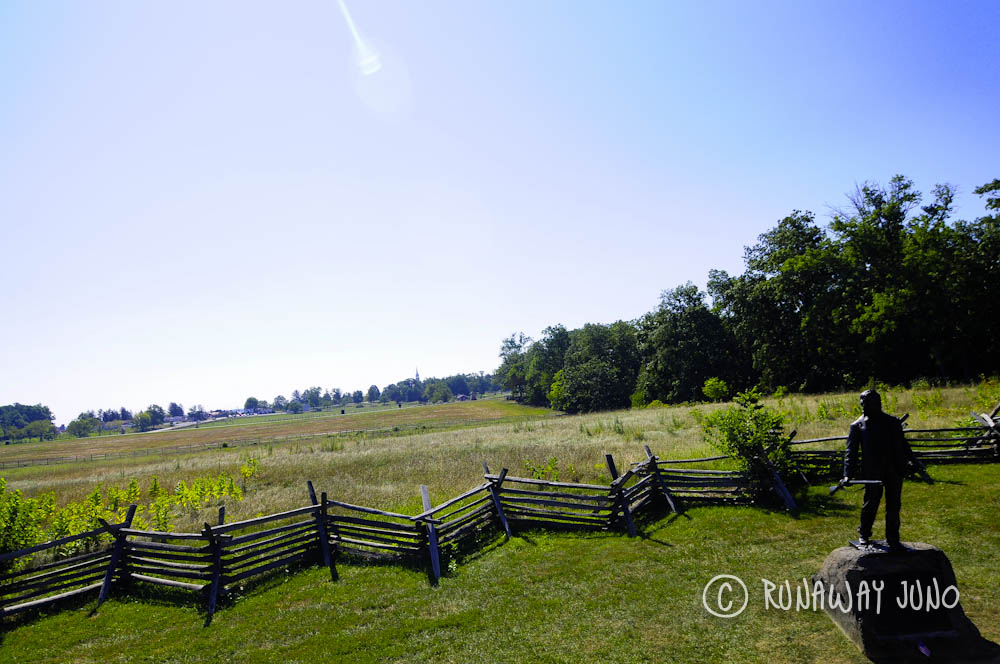 3 thoughts on “Photo of the Week: Serene Gettysburg Battlefield”