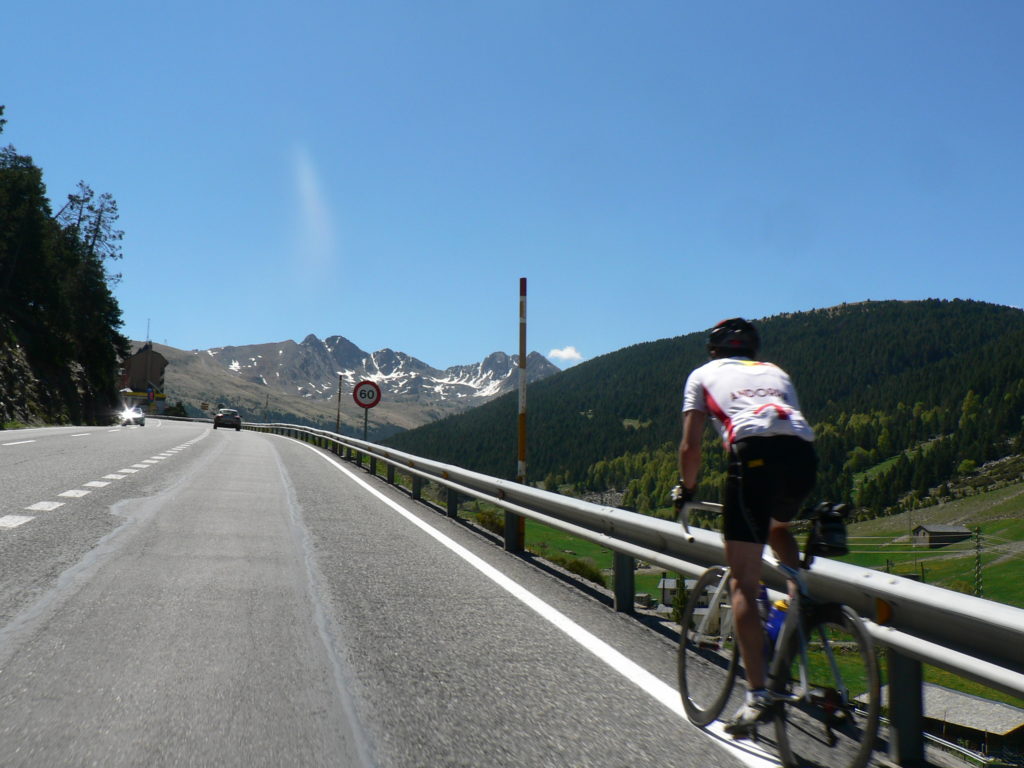 “It’s governed by a council/ All good souls and wise./ They’ve only $5 for armaments/ And the rest for cakes and pies.” -Pete Seeger, “Andorra”

As your attorney, I advise you to rent a fuel-efficient automobile and drive at top speed to Andorra, but before you start packing the trunk with ether, Wild Turkey, and limes—stop. And think. Absinthe in Andorra is as abundant as the mountains, and at 3 Euro a liter for a bottle of the Green Fairy, you have more room for the Acapulco shirts and handguns. Now for the gory details. You have to go through France or Spain to get there. No public airports in Andorra, just curving stretches of finely-manicured highway being skillfully navigated upon by peace-loving Andorrans. Here I take the risk of coming off as some pretentious jackass, and I invite you to do the same. Because somewhere, in gritty Williamsburg, Austin, and Portland bars fair-skinned hands will tremble around their cans of PBR and filterless Luckies with borderline-uncontrollable desire as you utter one of the most powerful combination of words in modern English, “When I was in Andorra…”

Undoubtedly there will be those who, while able to identify the finer points of bicycle restoration, are unable to locate Andorra on a map or think it would be a great name for a band nobody’s heard of yet. Therefore you must arm yourself to the teeth with information. Skip the CIA Factbook because I’m supremely confident that they got their information from Pete Seeger’s 1960s love ballad about Andorra. However, recent developments must be taken into account in order to rightly appreciate the evolution of Andorran sagacity. Since the 1960s, it would appear that Andorra’s approximately $5 defense budget has been decreased. By approximately $5. It now delegates responsibility for the protection of its people, cakes, and pies to Spain and France. Though, the French, it would seem, are envious enough of their Catalonian neighbors and the unrivaled quality of their queso-induced siestas, that they keep a jab at Andorra holstered and at the ready for whenever mention of this tiny Pyrenean utopia is mentioned. “What does one do in Andorra?” the joke-teller will inquire. When met with a shrug of the shoulder or the oral imitation of the sounds of quick, satisfying flatulence (the preferred method by which many French exclaim their befuddlement), the joke-teller will go for the throat: “On dort!” In English, the punch-line translates to “One sleeps,” but in French it is a clever play on words, as it is pronounced exactly as locals pronounce the name of their nation in Catalan (Andorre). Yes, one sleeps, but only after one has had their fill of outdoor activity, paella, and strong drink.

Make for the campsite of your choice. In a country 176 square miles, it’s hard to get too far out of an Andorran city, but what it lacks in seclusion, it makes up for with its ability to provide a perfect cocktail of European caravanners. Anywhere is close to the capital city of Andorra la Vella and its tax-free shopping, and if not traveling solo, “bungalows” offer cheap accommodation, with separate bedrooms, shower, and a kitchen/absinthe-drinking arena perfect for discussing the social commentary of Celentano’s “Yuppi Du” (Youtube it). Though as the propietari of the Camping Pla confessed to me, the shower is not quite big enough to fit all your friends in at once. It can be hard to find a “cheap” plate of local grub, but you get what you pay for, and a plate of local paella and a bottle of house wine split with a camarada will leave one immensely satisfied. For keeping to a budget hit up the Andorra 2000, the bastard step-child of Walmart and a medieval public market, for its cheap and affordable selection of any type of alcohol under the sun, the legs of any standard livestock you might desire, and a tremendous array of cheeses. Nutella comes in buckets.
Initially drawn to Andorra as part of the search for either a setting for a setting for workplace team-building exercises or mass destruction, the US State Department, in 2003, estimated the average daily cost of a stay in Andorra to be $226. This raises significant questions. How could four exuberant young go-getters in a brand-spanking-new Ford Fiesta make the 1,500 km, round-trip journey from Lyon, France to the illustrious Camping Pla in Canillo, Andorra, spend two nights in a bungalow, and return with a trunk full of Absinthe, Andorra-stenciled lighters, pens, fridge magnets, and the country’s Euro-style, ovular, white “AND” stickers (which identify the owner of the property upon which said sticker is affixed, as a pacifist pastry eater who will survive both nuclear holocaust and the subsequent zombie apocalypse thanks solely to Andorra’s “under the radar” status) all for the low, low price of approximately 120 €, for transportation, food, lodging, and party favors? What kicks were State Department henchmen getting in Andorra? Maybe they should be writing this article.

All in all, Andorra offers an affordable feast for the soul and all senses. It takes a special kind of person to reach this Shangri-la of the Pyrenees, an even more special person to throw the proverbial boulder in the figurative pond of its quiet mountain towns, and a rare breed of animal to successfully arouse the (wander) lust of those susceptible to stories of raucous adventures in countries they weren’t quite sure existed.

To do it right, go in June, just before the tourist season picks up. By beating the rush, you guarantee yourself a wide berth to roam about Andorra spontaneously and irrationally, and you are more likely to succeed in finding lodging only a short stumble away from local bars and restaurants. July and August bring in the summer hordes before the short fall and the ski season. Accommodations and other information are easily found on Andorra’s tourism website. Andorra is perfect for a weekend experience, but its mountain walls start to close in and the rental car will get restless for any time longer than that. And for God’s sake, don’t go during ski season.

Beau Miller holds a Master’s degree in International Relations from Syracuse University and is America’s greatest long-distance driver, having recently learned to drive manual, at 29 years young, on the way to Andorra. This is his third article for GoMad Nomad. His previous dispatches have been from Nepal and Oman.

Beau Miller holds a Master’s degree in International Relations from Syracuse University and is America’s greatest long-distance driver, having recently learned to drive manual, at 29 years young, on the way to Andorra. His dispatches for GoMad Nomad have been from far-flung places lie Nepal and Oman.