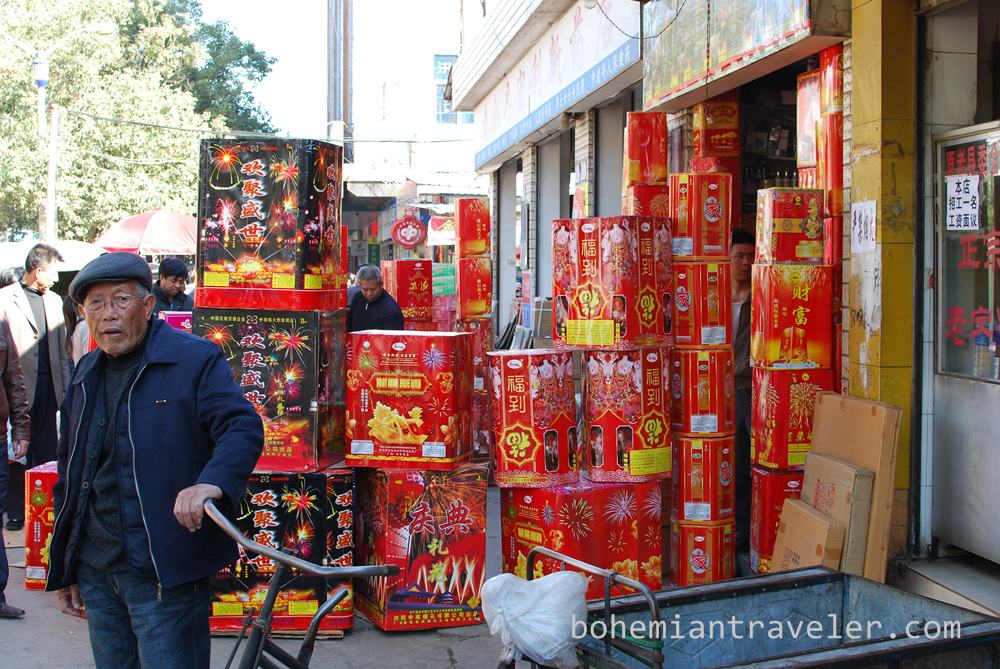 The shops are all closed up. There’s hardly any foot traffic or cars on the streets. Red lanterns hung around the city add to the atmosphere. But the most noticeable way to tell it’s the Eve of Chinese New Year is by the excessive and near constant explosions of firecrackers.

Children light them off. So do adults. But it’s the teenagers that are most aggressive. One will ride on the back of a scooter facing backwards lighting a series of firecrackers and dropping them while his or her friend drives away. I saw others having mini-wars; throwing clusters at their friends. Others just set them off near random people and scurry off before being seen.

Some firecrackers are bigger and louder than others. After a long string of big ones, at least one car alarm will get set off. The climax came at midnight, when it seemed like each of the city’s citizens was setting fireworks off at the same time.

I am witnessing all this in the small city of Jianshui, in Yunnan Province, about 200 km south of Kunming. Jianshui is known for its traditional architecture: its huge red gateway arch Chaoyang Lou, its venerable Confucian academy, the traditional Zhu Family Gardens, and the captivating 17-arch Twin Dragon Bridge.

Tomorrow, the 23rd of January will be New Year’s Day and people will leave their homes to promenade through the old cobbled streets during the afternoon. The shops will all be open; the Taoist temple will be busy, and the street vendors will be cooking up their famous Jianshui barbecue.

The Chinese call this Lunar New Year’s celebration Spring Festival. The Lunar Calendar is observed in much of Asia. Last year I celebrated Lunar New Year in South Korea, which was an incredible cultural experience for me, spending the entire day with a Korean couchsurfer and his family. This year was not as special for me—I’ve just been watching people celebrate in the streets. I wasn’t able to see how any Chinese families celebrated in their homes. Nevertheless, it was fun to see everyone excited and in a festive spirit.

See the photos below of Jianshui preparing for Spring Festival, or Chinese New Year: Red lanterns hang on the city gate in Jianshui, China New Year’s decorations at the Confucian Temple in Jianshui, China Red lanterns hung at the Confucian Temple in Jianshui, China. Fireworks for sale in Jianshui, China. Setting up fireworks at a private residence. Exploded fireworks in front of the Linan Inn in Jianshui, China Shops closed up on New Year’s Eve. Smoke after the firecrackers. Out with last year’s red lanterns.