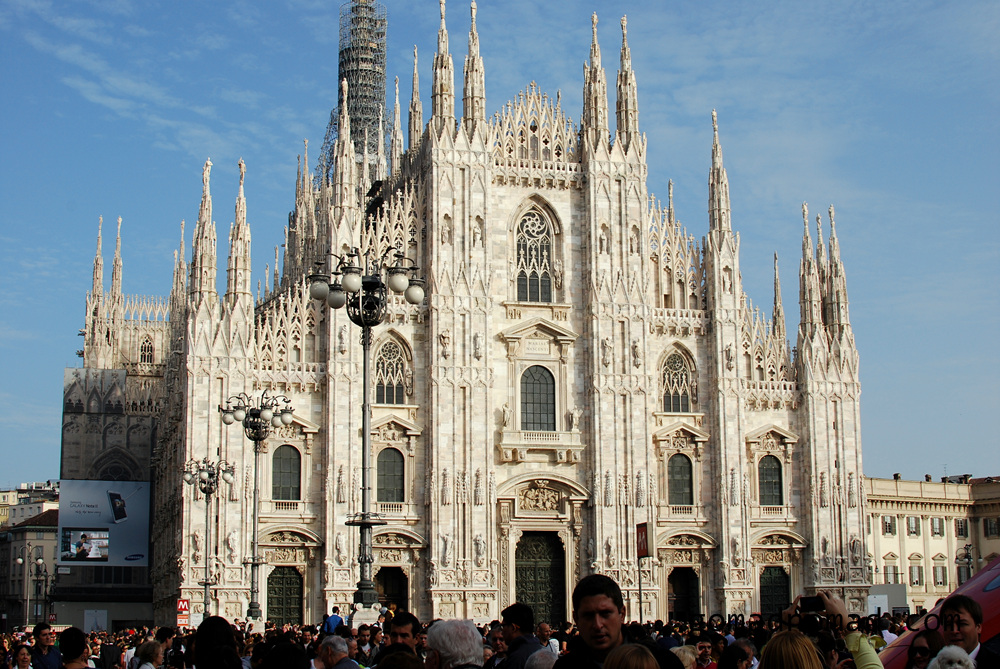 Milan Cathedral, or Duomo di Milano in Italian, is the fifth largest cathedral in the world and the largest in the Italy (St. Peter’s Basilica is larger, but is located in the Vatican City). Begun in 1386, the Gothic cathedral took nearly six centuries to complete.

The Milan Duomo is located on Piazza del Duomo, or Cathedral Square. It’s the main piazza of Milan. The piazza marks the center of the city and in its surroundings are some of the most important buildings of Milan including the Galleria Vittorio Emanuele II.

The old baptistery, dating from 335, still can be visited underneath the Cathedral, and is considered one of the oldest Christian buildings in Europe. It is also possible to climb up onto the roof and enjoy the outstanding views of the city between the Gothic spires. The roof is open daily from 9 am to 5:30 pm, costing €7 for the stairs, more for the elevator.

Mark Twain visited Milan in the summer of 1867. He wrote about his experiences there, and about the Cathedral, in the Innocents Abroad. He was amazed by it. Years later, Oscar Wilde visited. He regarded the building as “an awful failure”.

The Cathedral is undoubtedly one of the must-see sites of Milan along with the Galleria Vittorio Emanuele II. It is the oldest shopping center in Italy, enclosed within a four-story double arcade.

My favorite lesser-known site in the city is the Milan Monumental Cemetery. A walk through artistic graves stones and huge mausoleums, this is practically an open-air museum.

Even though Milan is the biggest metropolitan area in Italy and the financial center of the country, it is often overlooked on most travelers’ itineraries in favor of Venice, Florence, Rome, and Naples.

Stephen Bugno traveled through Milan for the second time during his recent 3-month Europe trip in the fall of 2012. He edits the GoMad Nomad Travel Mag and blogs at BohemianTraveler.com

1 thought on “Photo of the Week: Milan Duomo”