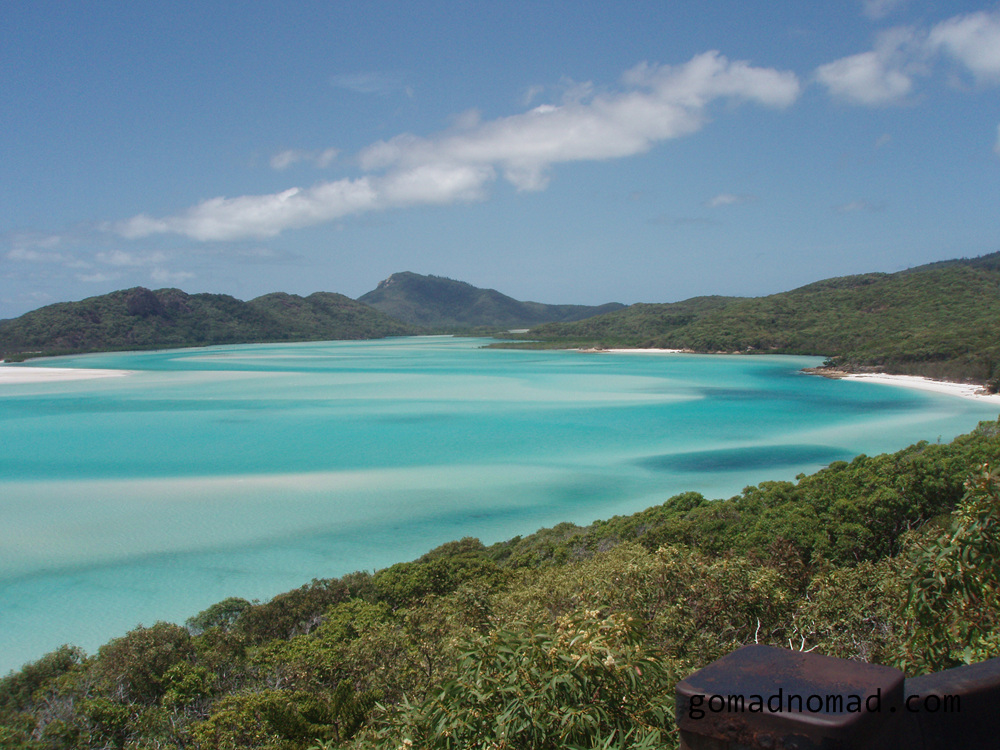 Welcome to the Whitsundays, a collection of 74 islands off the central coast of Queensland, Australia. This is Great Barrier Reef territory and a day out on a boat exploring the beaches and reefs around here is pure fun.

Together with our vessel’s perma-tanned, skin like leather, captain, six of us headed out on a little voyage, dropping anchor to snorkel, dig the beaches and share in that oft heard lament of travelers here, that we all wished we could live in Australia but, oh, how we don’t have the skill sets to be awarded a visa! Still, views like the one above go some way to compensate, or further damn. This is Hill Inlet at the northern end of Whitehaven Beach, found on Whitsunday Island and snapped after a sweaty little slog up to a viewing area above Tongue Point.

Taken during the Australian summer, it’s a time of year that sees plenty of winter refugees from the northern hemisphere arrive in town. But they’re not the only visitors. Summer here is also stinger season, when armies of jellyfish roll into the waters. Commanding the troops are the Box Jellyfish with stings on them that have been known to kill humans within three minutes. Signs along the coast revel in the danger and any boat operator worth their permit should ‘encourage’ you to wear ‘stinger suits’, a kind of wetsuit/pajama hybrid. They’re initially undignified but quickly become hilarious once you get into the spirit of things. If it all sounds a bit dramatic, well, perhaps it’s just the authorities covering their backs. Our party recorded no Box Jellyfish sightings (although would we have recognized them if we did?).

Popular access to the Whitsundays is from Airlie Beach, a town frequented by a mix of divers, yachties and Australia’s ever present bar-crawling backpackers. Budget accommodation seemed to be the exclusive realm of hostels that like to party. Splash out on a higher price range or bring a tent if that’s not your scene.