It’s a curious thing, gold. It seems to drive people mad. I mean, stark-raving, cowered down on all fours digging through dirt to get at it, mad. A single cry of “there’s gold in them there hills” is enough to attract a circus of the desperate, exploited and downright greedy. Countless numbers have succumbed to its influence, from religious nut jobs to foppish romantics, and been turned into a soulless mob of bug-eyed, salivating Gollums. Oh, and sometimes it isn’t even gold! It’s black!

In the state of Minas Gerais, Brazil they’ve even named a city after it, Ouro Preto – Black Gold. Black because the nuggets here came encrusted in iron oxide.

Originally named Vila Rica (Rich Village), this was the place to be in Brazil in the 18th Century on accounts of large deposits of the gold stuff, sorry black stuff, in the surrounding hills. Such wealth attracted the usual hotchpotch of liggers and groupies including European intelligentsia, arty types and of course that ever persistent stalker of wealth, the church. Between them they gang-banged the hills for all they were worth, built a small city and skulked off to the soon to be state capital, Belo Horizonte once the wealth dried up. Vila Rica became Ouro Preto shortly after. 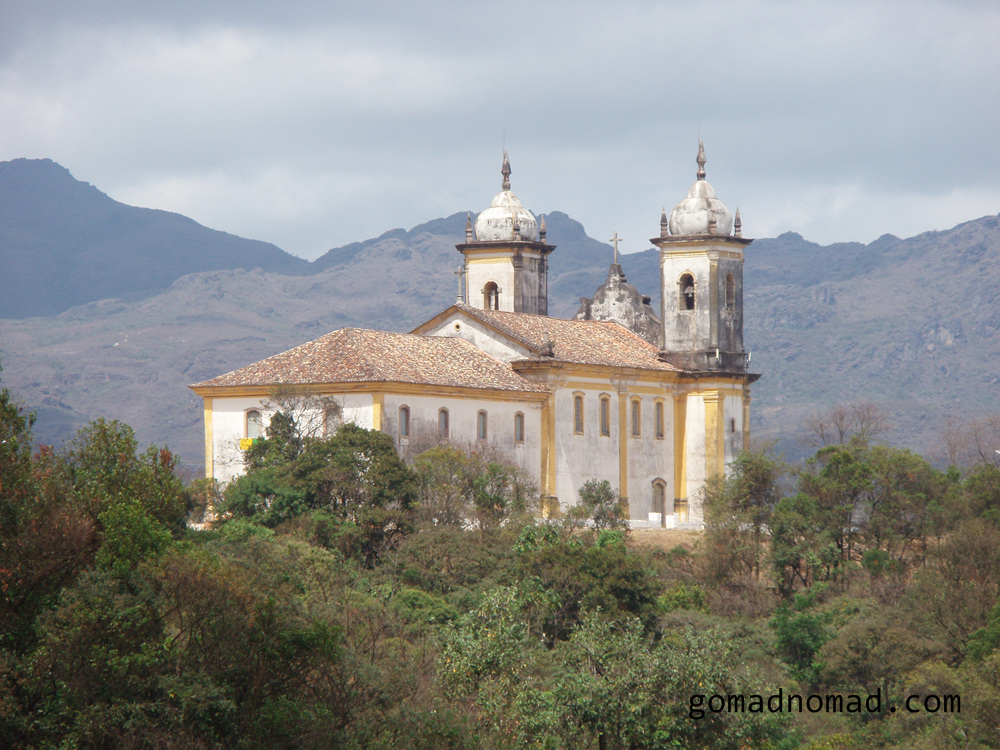 On my part, I went the opposite way, leaving ‘Belo’ behind and arriving in Ouro Preto a few hundred years late for the party.

The first thing one notices about Ouro Preto is just how beautiful it is. Staggeringly so. There’s much to despise about the tag team of ruthless colonial and God fearing bully but they really knew their stuff when it came to aesthetics. The city is a rambling mosaic of brilliant whites, brick-red roof tiles and the soft pastels of its ornate doors and shutters. The whole place gives off that warm glow of a lovable nan’s patch work quilt.

In fantastic contrast, the surrounding Serra do Espinhaço mountains, all broody greens and browns, are about as un-Brazilian as you could imagine anything to be. It’s like they took an Algarve village of the year contest winner and dropped it in the Scottish highlands (without the crap weather). I can’t remember how many times I got to the end of a street with my gob wide open in reverence at such oil painting perfection. Or perhaps I was just out of breath as the streets here are extremely steep. 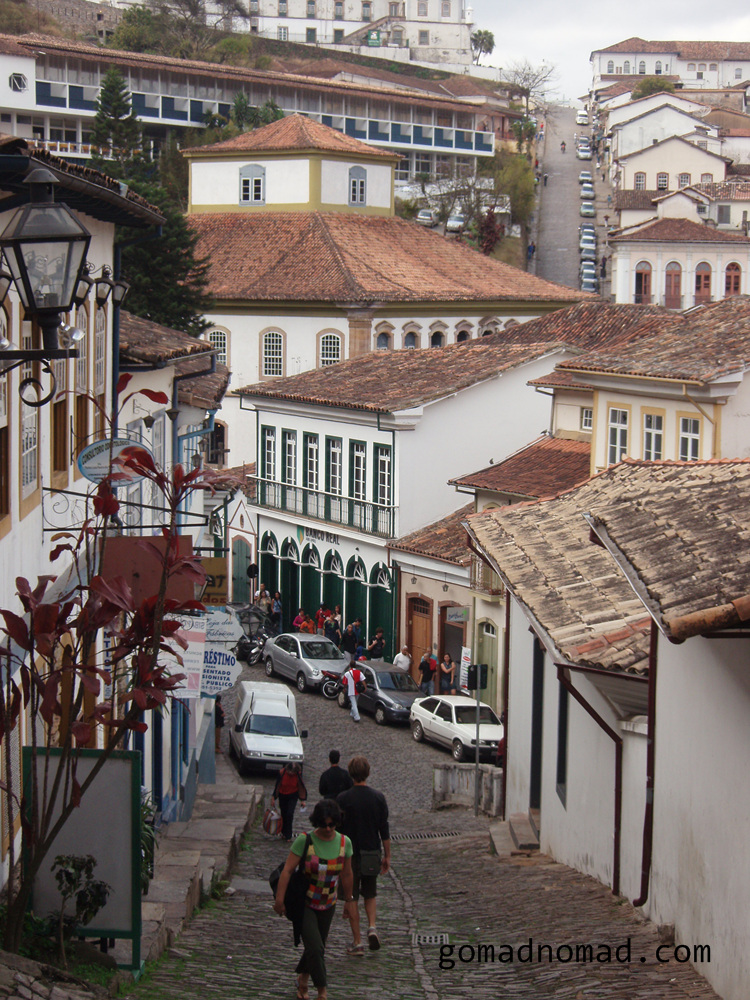 Whilst the hills no longer pour forth gold (although there’s an abundance of other minerals and stones around) there’s still plenty of ‘bling’ in town. Unsurprisingly a lot of it is in the churches, of which there are many. But they’re not the stoic, foreboding lumps that I’m familiar with in my native England. These churches are perky little Baroque delights that spring out of small plazas and play hide and seek around tight corners.

Treasure hunters should head to the Igreja de Nossa Senhora de Pilar, in the south-east of town, which seems to have the lion’s share of the spoils.

As I paid my entrance fee to the surly custodian I could have sworn she gave me a look warning me not to try and make off with any of the precious kit inside. She might have been right to. I’ve never seen so much gold in all my life. There was enough ‘bling’ in there to reduce even the most obnoxious rap superstar to tears. To be honest, I felt a little uncomfortable, not least because of the headache inducing shine. One couldn’t help but wonder how much of this wealth had been seen by the poor buggers who were forced to dig it out in the first place. I began to resent having handed over my money to get in. With all this gold, they surely didn’t need it anyway. It was a relief to leave. 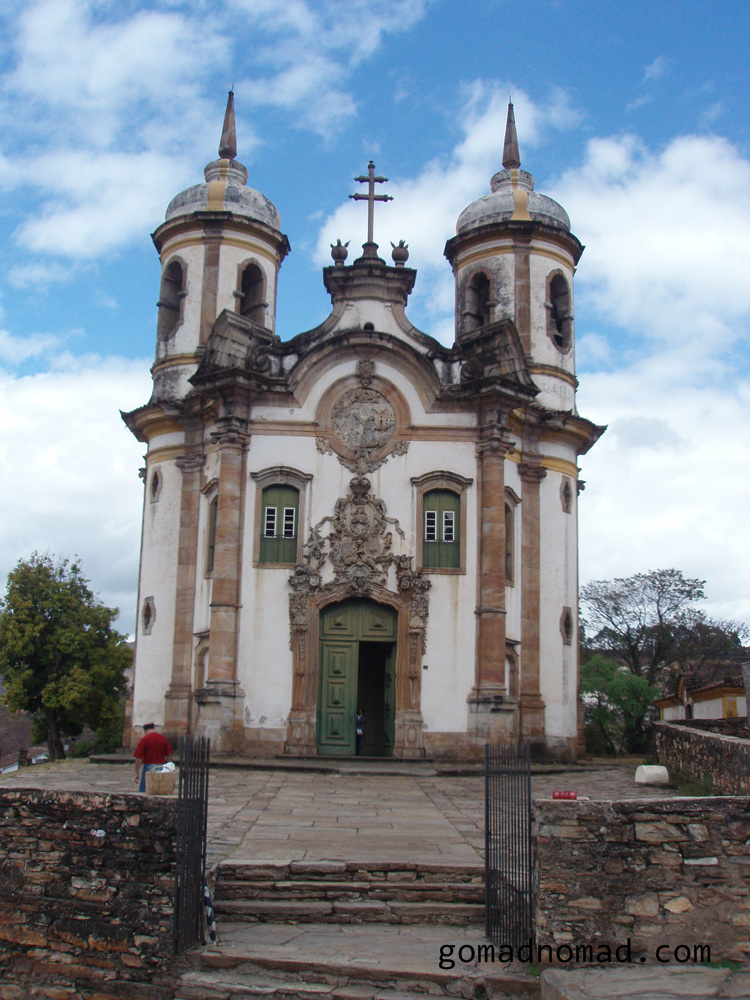 Ouro Preto’s most celebrated church is that of São Francisco de Assis, and it is a little stunner. Much of it was designed by Ouro’s most famous son, the sculptor Aleijadinho (Antônio Francisco Lisboa). With a name like that you’d be forgiven for thinking he played up front for the national soccer team but it actually means ‘little cripple’. This master craftsman had a deteriorating disease that left him with fingerless hands making all the more astonishing the delicate splendor of his work on São Francisco de Assis. Now, there are far better people than I to explain the religious symbolism that garners the buildings outer walls so I’ll just say this: if, like me, you’d begun to believe churches incapable of soft touches and subtlety then I implore you to see this one. It’ll surely break your heart.

During Ouro’s boom town years Brazil was still under colonial Portuguese rule so for all the riches the town puts on display one suspects it isn’t nearly as much as ended up on ships to Lisbon. It must have been hard for the natives to take. Thoughts of their resentment and the call to revolt spurred me up yet another vertiginous cobbled street to Praça Tiradentes, the center of town and a monument to the Inconfidencia Mineira, Ouro’s attempt in 1789 at freedom from Europe. 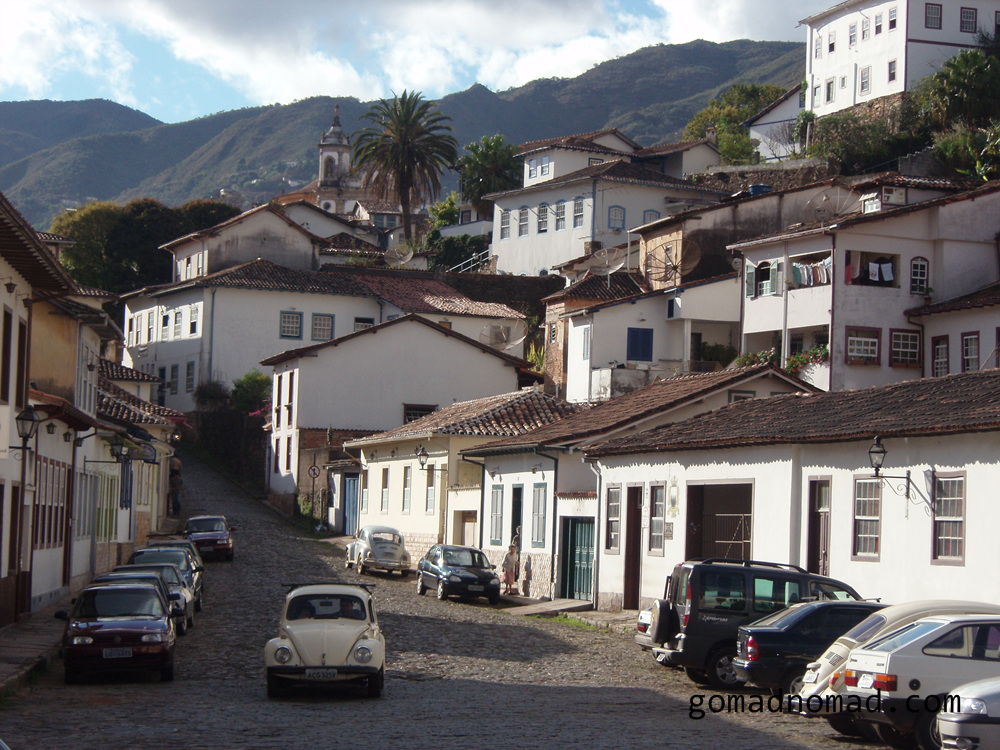 In the spring sun the plaza gave off the aura of hope and spark that I’m sure all revolutionaries must feel when they first contemplate the idea. Unfortunately for Ouro’s conspirators, that hope quickly turned to despair, particularly for their leader and part-time dentist, Tiradentes. Tiradentes, meaning ‘Tooth Puller’ is an unlikely moniker for a revolutionary. On the contrary, it sounds like the name given to a government hired thug, brought in precisely to put down revolutions. But Tiradentes (real name Joaquim José da Silva Xavier) it was who took umbrage with Portuguese exploitation and set about revolting. However, one of his group cracked and gave up the plot. After a three year trial Tiradentes ended up sliced and diced and put on fragmented display along the road to Rio de Janeiro. One winces at what they might have done with his teeth!

Anyhow, there he was in front of me, not his head on a spike (that mysteriously disappeared), but in the very same spot, a bronze study of pomp and zeal, his back turned from the old Governor’s Palace, gloriously taking in the surrounding peaks. A symbol of the spirit that eventually wrested Brazil from those thieving colonials in 1822. 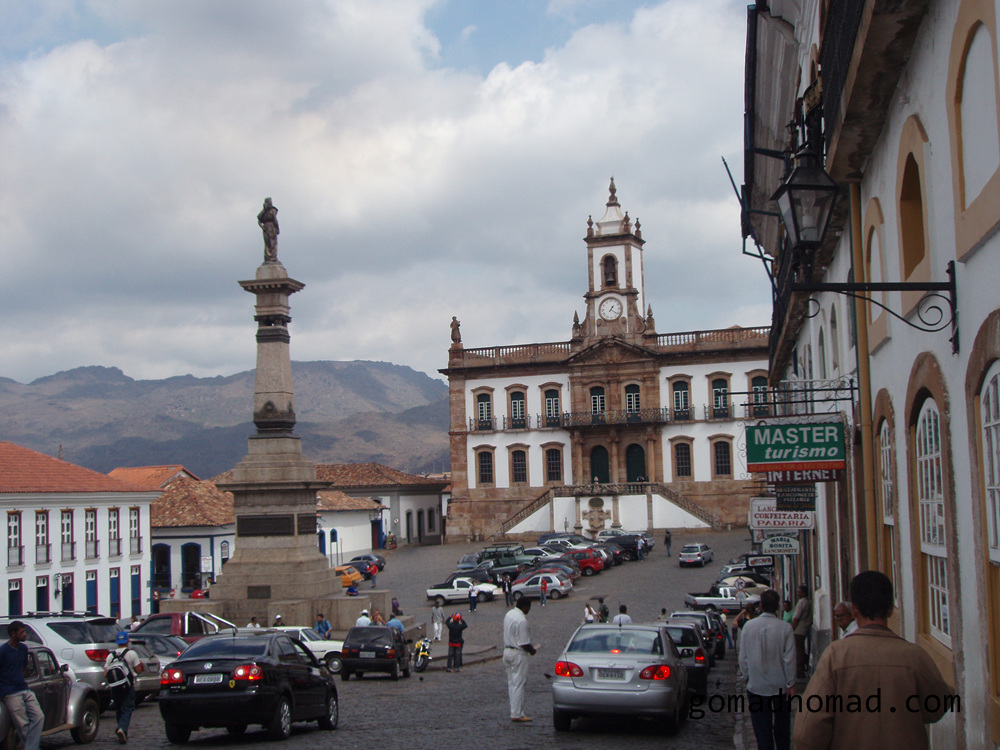 With most of the wealth plundered and the machinations of running a state moved to Belo Horizonte, only the thinkers remain from those turbulent days. I found it hard to believe, but Ouro Preto is a university town that plays host to the Federal University of said name and its 8000 students. Hard to believe because these days the vibe of Ouro seems too quaint and twee to have a bunch of drunk frat boys yobbing about, urinating up walls and breaking the finery. But the intellectual history is here (as are the frat houses or repúblicas) and as I walked around I saw plenty of musky coffee shops that had the look of needing an I.Q. prerequisite to enter.

One afternoon, back at the hostel, I chanced an encounter with one of the city’s visiting intellectuals. We settled down together on the rickety hostel veranda to put the world to rights. He was a young Brazilian, all smooth olive skin and black rimmed spectacles to match his thick, black hair. He wore a brown suede jacket with elbow patches that screamed bookish intellectual and rolled a cigarette using brown papers. A Paulista (resident of São Paulo), he’d come to Ouro Preto to find writing inspiration. 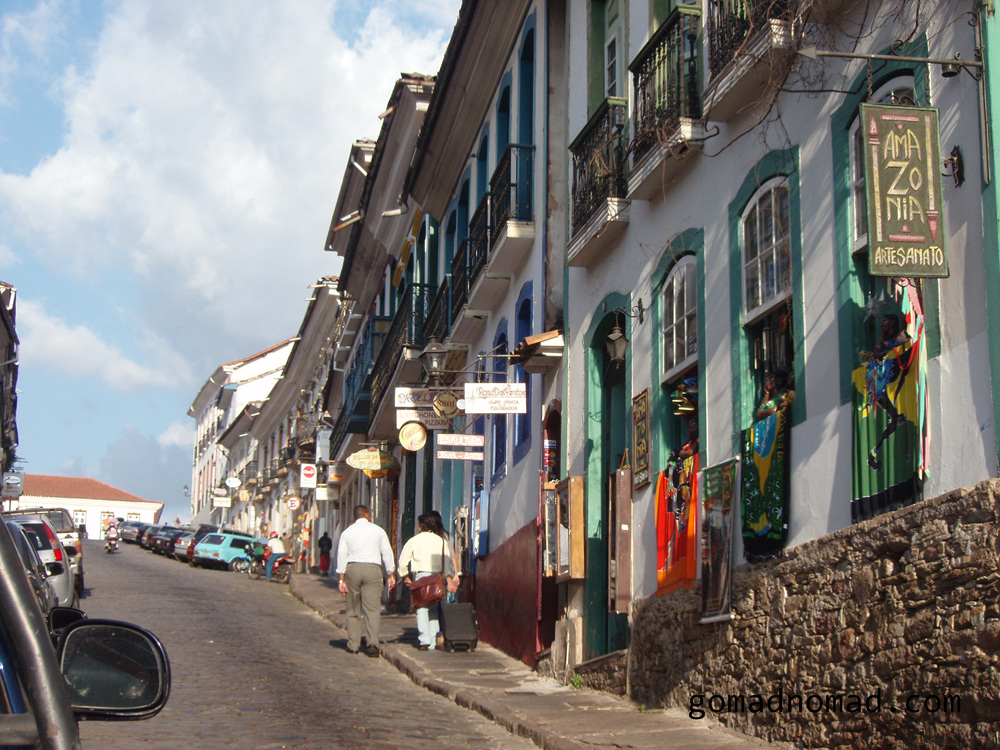 Our conversation ended with him asking me if I liked literature, the word carefully enunciated as if he was testing me. It put me on the back foot. He could have just said ‘books’ or ‘reading’, but no, ‘literature’. I hesitated.

“Err, well, I guess.” I swore at myself. Of course I do. But he said literature and he’s wearing a jacket with elbow patches! He offered me a second chance.

“Well, let’s see. If you like literature, then surely you write poetry.”

His eyes searched me for the response that he already knew was coming. I don’t, but as I turned away to contemplate the city view I felt like this would be as good a place as any to give it a go. For Ouro Preto is poetry, of the most beautiful and heartbreaking sort, that which is born out of the desire to escape the miserable grind of working the earth amidst the orgasmic din of mad religion. Ouro Preto’s verses have ridden the guttural howl of revolution and found a peace that comes with freedom from Imperial greed and gloat. Nothing, not even freshmen bar crawlers, can spoil it.

All photos by the author