Defender of the Fatherland Day in Kyrgyzstan

Throughout the post-Soviet world, some of the most interesting days of the year are the holidays that see their origins from the Soviet era. ‘Defender of the Fatherland Day’, still celebrated in a number of former Soviet Republics on the 23 of February in relation to the founding of the Red Army in 1917, is one of those days that feels somehow suspended outside of time. 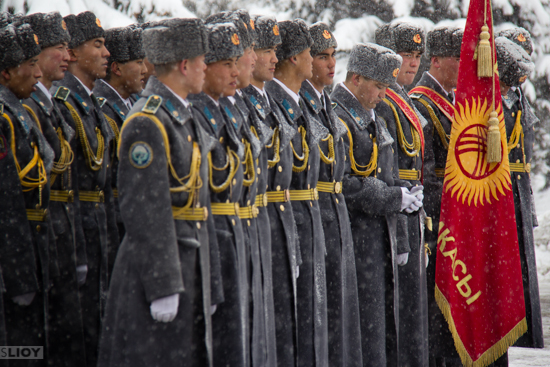 From my apartment in the center of Bishkek, Kyrgyzstan I heard these many columns of soldiers chanting as they plodded towards Victory Park long before I ever saw them. As they continued down the main avenue, police shut the length of чуи проспект to traffic and local citizens gathered in doorways to shoot cell phone videos while avoiding the falling snow. Leaving Chuy with a left-face, the soldiers gather together at Victory Park to await the presentation of a ceremonial wreath before the Monument of Victory that was built in 1985 to celebrate the 40th anniversary of World War Two. This Great Patriotic War was almost 70 years ago at this point, but the cultural memory somehow lives strong in these sorts of celebrations. Victory Day (May 9) and Defender of the Fatherland Day still see soldiers parading through the streets and the occasional hammer and sickle on banners hung to celebrate the memory of the soldiers who fought so long ago.

To conclude the celebration, local youths whose family members served in the military offer a wrath to the statue of a Kyrgyz mother eternally waiting for her sons and husband to return home from war and the flame that will burn as long as she waits. As the snow falls more quickly, the Kyrgyzstan military band plays a mournful march while the soldiers march past the flame one column at a time to salute the memory of those who had served before.

Want to know more about this corner of the world? See these 8 Reasons to Visit Kyrgyzstan or the author’s Central Asia Travel Blog for more!