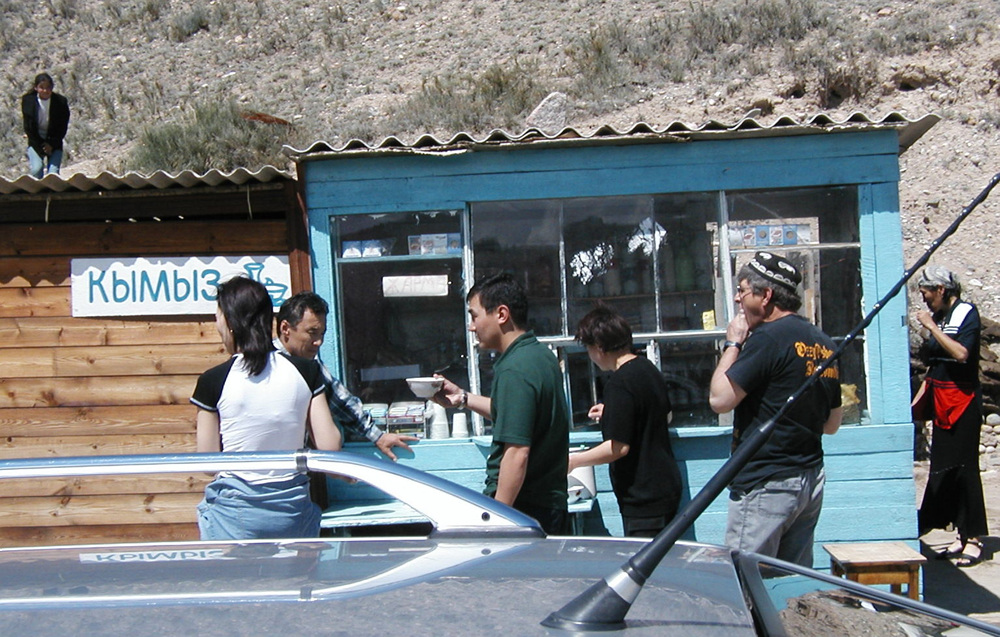 Perhaps a remnant of Soviet culture, drinking culture is big in Kyrgyzstan. While vodka is usually the preferred imbibition, another option does exist. Kumis, a slightly alcoholic horse milk popular in a number of Turkic cultures, is particularly prevalent in Kyrgyzstan. Stalls on the country’s mountainous roadways or yurt tents at many of the most popular tourist sites can be your gateway to this sour treat. (The alcoholic content of Kumis is quite low, so even inexperienced drinkers need not be afraid of giving it a try.)

In the south of Kyrgyzstan, Peak Lenin is considered one of the easiest +7000 meter peaks in the world. Closer to Bishkek, the Ala-Archa National Park is home to a Soviet-era ski base and the once-famous Ratsek climbing hut. In between, more than 80% of the country is covered by mountains of the Tian-Shan and Pamir-Alay ranges. Sometimes referred to as the ‘Switzerland of Central Asia’, Kyrgyzstan is considerably more budget-friendly than its European counterpart. For snow-sport enthusiasts with an expanded budget, heli-skiing is cheaper here than almost anywhere else in the world. At several thousands of dollars for a week-long trip, though, it may still be out of the range most backpackers are aiming for.

Stalinist architecture still dominates much of the city-center of Bishkek, Kyrgyzstan’s capital. Though progressive Kyrgyzstan has replaced many of the Lenin and Stalin statues with Kyrgyz folk-hero Manas, one can still occasionally come across the odd hammer and sickle and hordes of the ever-popular Lada Niva cars. Across the country, monuments to the Great War (WWII) and military heroes are also common.

The world’s 2nd-largest alpine lake, Issyk-Kol doesn’t freeze in even the harshest depths of the sub-zero winters of the surrounding Tien-Shan Mountains. The Northern shore of the lake caters largely to Russian and Kazakh party-goers who crowd the town of Cholpon-Ata, while the village of Karakol to the east has become a trekking and horse-riding hub for travelers. On the south of Issyk-Kol, with much less tourist development than the others, are a handful of villages with small guesthouses but not a lot to do (perfect for idle relaxation). No matter which part of the lake you choose, mountains loom large across the lake and Bishkek is only a day’s drive away.

Osh, one of the historic centers of the Silk Road and an important trading center since at least the 8th century, is home to perhaps the most colorful bazaar in all of Central Asia. Stretching for several kilometers down both sides of the Ak-Burra River in the city center, shoppers are just as likely to find sheep heads and Obama-brand aphrodisiacs as they are to bargain for more mundane items like fresh fruit and household goods. Bargain hard for the best deals!

Outside the village of Tash-Bashat, on the slopes of a hillside above the town, grows a fir-tree forest planted in the shape of a Nazi swastika. Though legend links these trees to defiant German prisoners of war towards the end of World War II, though the truth is unclear. Regardless of the origins, this is an unexpected site to come across hidden in the depths of rural Kyrgyzstan.

Eating with all 5 Fingers

Besh-barmak, literally ‘5 fingers’ in several of the Turkic language of Central Asia, is considered one of the national dishes of Kyrgyzstan. Traditionally eaten with the hands (whence the name), this dish of mutton, entrails, noodles and sauce is served on most Kyrgyz special occasions. Keep an eye out in traditional chaikanas and cafes, though, and you should be able to find somewhere to sample for yourself.

Until the arrival of Russian armies and the settling efforts of the Soviet Union, Kyrgyzstan was traditionally a nomadic culture. This nomadic past can still be seen in the yurts that dot the Kyrgyz countryside and prevalence of horses that remains an important part of Kyrgyz life. Visitors to the country can experience this history through programs like the Community Based Tourism organization, which can organize multi-day horse treks that stop in yurts each night before continuing your personal migration across the hills the next day. If you’ve ever looked for a country where you could live like a nomad for at least a few days, this is the one!

7 thoughts on “8 Reasons to Visit Kyrgyzstan”