Editor’s Note: The follow story about Patpong contains language and sexual content that some readers might find offensive. Although we typically don’t publish these types of stories at GoMad Nomad, I thought it was important to show the “other” side of travel and a peek into the realm of sex tourism. If you don’t want to continue, click through this link to see a picture of a cute orangutan. 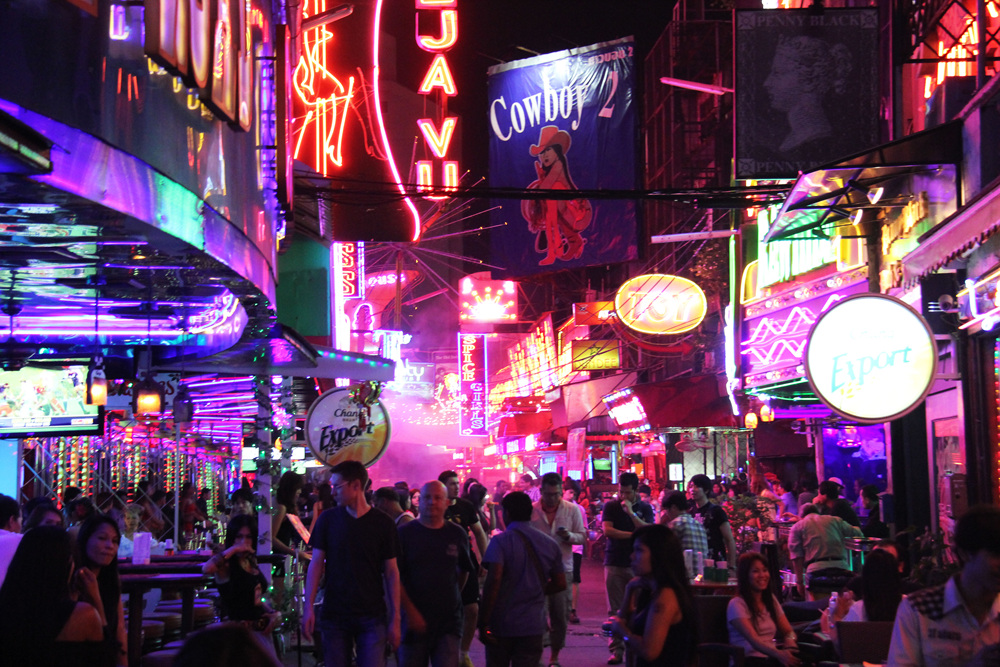 Thai locals nevertheless shake their heads at the mere thought of this perverse corner of Bangkok. When my girlfriend and I wandered into a hostel to ask for directions, the man behind the counter made this clear: “It’s awful,” he said. He explained how he used to bike through Patpong’s alleys every day to get to work, and would sometimes catch an eyeful of women onstage as he rode past.

He shook his head free of the memory. “That was enough.”

My girlfriend and I, however, were immediately sold. We hailed a taxi to combat the unavoidable Bangkok traffic, reaching Patpong shortly after eight. As soon as we stepped out of the cab we heard, for the first of well over 100 times that night, a phrase as hideously graphic as it is suspiciously vague: 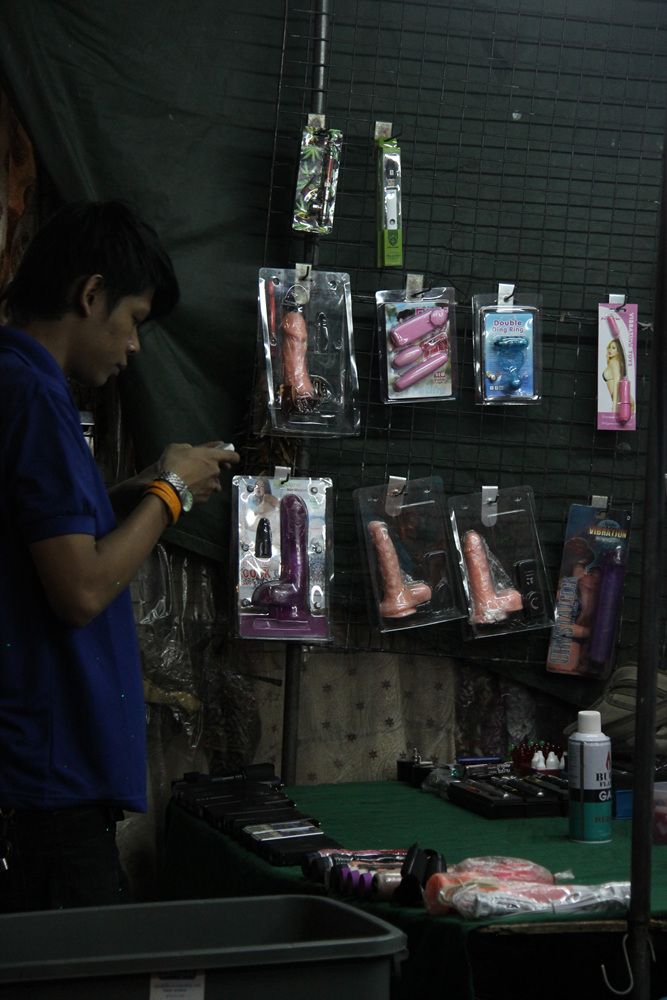 The street hawker shoved a show menu into our chests, forcing us to at least take a look at his selection, which included, but was not limited to, “PUSSY CHOPSTICK”, “PUSSY CUT BANANA”, “PUSSY SMOKE CIGARETTE” and “PUSSY OPEN THE BOTTLE”. Any lingering mystique quickly evaporated once we realized these were simply very boring tasks most humans endure every day, only done by vaginas.

We were about to turn away when something caught our eye. At the very bottom of the show menu was listed a curious addition: “MAN & WOMAN MAKE LOVE”.

“What,” I asked the peddler, “like, two people having sex? Onstage?”

I turned to my girlfriend, who was, as I was, torn between skepticism and intrigue. The man saw our hesitation and quickly urged us into his tuk-tuk, aimed at a destination some 20 minutes away, to see “the FUCKING show,” as he called it, really emphasizing the FUCKING part, for 800 baht, and we had to leave then or we’d miss it.

“What, they just keep going?”

“Yes, they continue FUCKING. It is the FUCKING show.”

I gave this about three seconds’ more thought than I ought to have. “Maybe later,” I concluded, and turned to walk away.

“But you said it goes all night.” 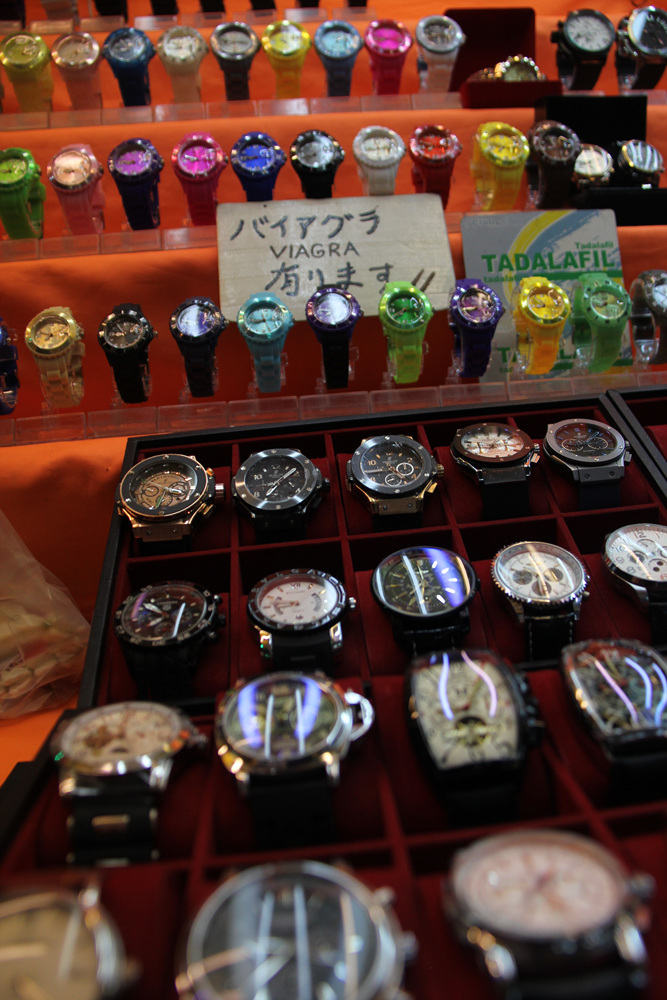 We bounced around Patpong after that, browsing for watches and belts in between sketchy talks with sex show hawkers. It was during one such interaction that a pudgy, androgynous thing waddled up to us; it was either a very pushy female or a soft-skinned male, and I couldn’t for my life tell which one.

I turned to walk away, but the seemingly genderless blob reappeared in front of me. “Three hundred,” it said.

My girlfriend and I agreed that, if this were true, it was indeed a very good price. We followed the suspiciously sexed salesman through the alley market to a shady concrete building, then up a flight of stairs with pale blue walls dimly lit by a few spare fluorescent bulbs.

The name of the club I’ll never know. We paid our 600 baht, received our “free” drinks and were seated beside two American GI-types, beefy crew-cut white dudes loudly clapping and laughing at the show. Three women lazed around onstage, barely swaying to the music. 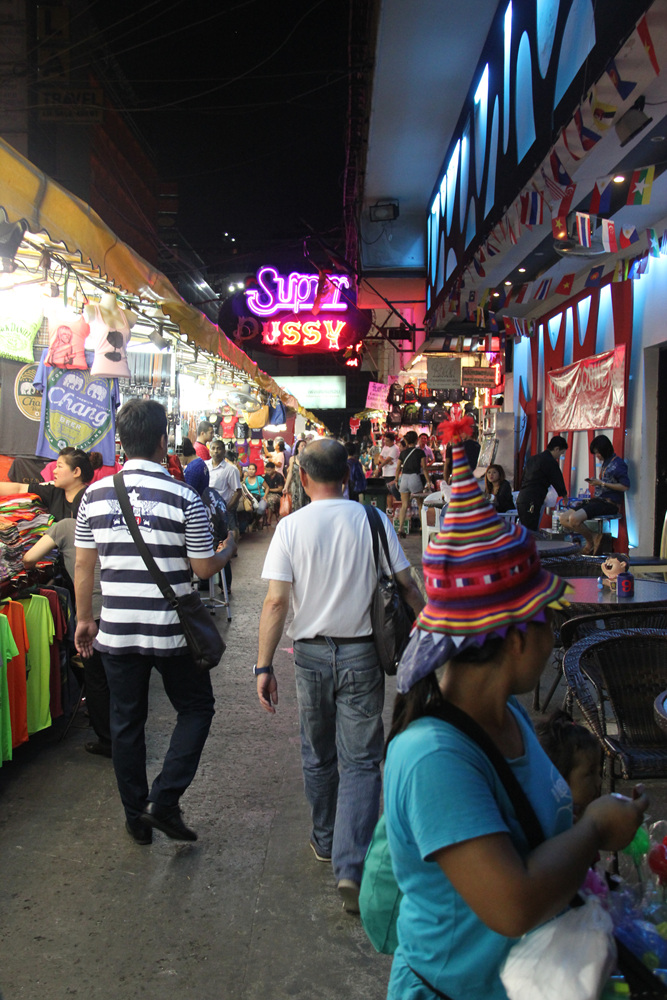 One performer, flabby and unsmiling, lay on her back with her pimply butt in the air, shooting, with admittedly impressive accuracy, darts from her vagina at a balloon taped to the ceiling. Another pulled a string of dog tags and flowers out, like a sordid magic show. One of the beefy tourists applauded, and the women found him as entertaining as he found them; they convinced him to try and catch the flying ping-pong balls with his mouth, which he repeatedly failed at, causing only more laughter from both sides.

I stood up and walked to the front counter to talk with the manager to ask about the live sex show, a topic that I later realized would have been better brought up during the cash transaction. That show, he told me, wasn’t public, and cost 1,000 baht. I put a little effort into arguing something — some money back, to yell at the lying street peddler, a discounted sex show price — but gave up after a minute of trying to hear and be heard over the blaring club music.

My girlfriend in particular was not happy — not so much because we were blatantly swindled, but because the show we wound up paying for was so sexually depressing. As a man, it’s easier for me to avoid being personally offended at the sight of women prying apart their glittery blue panties to spritz water on a houseplant or something, but I understood her disgust. The display was frighteningly pathetic. It would be one thing if these were professional dancers pulling off impressive stunts, but these were sad, unclean women performing sad, unclean acts. We left after 10 minutes.

The streets felt drained after that. Patpong had lost its charm, its imagination; the illusion of something exotic shattered by a grim and inevitable reality. As we walked out, a man in black leather with a long wooden rod stood in the doorway of an all-black building, and gently tapped me with it just above the butt as we passed.

Startled, I turned around. He winked at me. “Don’t knock it ‘til you try it,” he said. I wanted to stop and explain to him that we already had, but instead just turned around, saved my time and walked away.

Going to Bangkok? Check out these great deals on hotels in Bangkok. If you want to visit Patpong, stay in a hotel in Silom district.

5 thoughts on “Finding the Bang in Bangkok: A Night in Patpong”