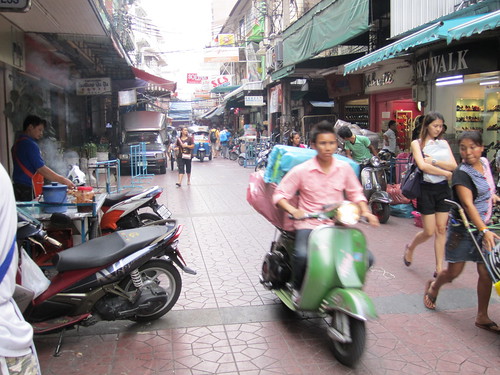 Out on the Streets

The scene on the streets of Bangkok depends entirely on the neighborhood you are in, but expect to find plenty of activity. Lots of street food carts, makeshift souvenir stands, and markets filling the side streets. Avenues are crammed with cars, motorbikes, and the ubiquitous three-wheeled tuk-tuks. It’s moderately noisy and the air smells of exhaust most everywhere. The traffic situation is much better than it used to be before the BTS above-ground light rail and underground subway were built. Unfortunately, the before mentioned modes of transport are too expensive for the common person, and most city folk ride in buses without air-conditioning.

Some part of the business district are very modern but there remain residential neighborhoods tucked into back streets where you could feel as if you are in a small town or village.

One cannot imagine Bangkok without the thought of street food. Not only snacks, but full meals can be had almost anywhere. Bowls of chicken, pork, and beef noodle soup are popular, stir frys, pad Thai, and buffet style trays where you can select your dish to go with rice. Seating is on low plastic stools around tables.

Pineapple, papaya, melon, and both sweet and sour mango depending on the time of year, can be found anywhere. And don’t forget the banana pancakes—crepes folded into squares with a sliced banana and egg inside, then fried and smothered in sweetened condensed milk.

When your fee at the ATM machine is more expensive than your accommodation, you know you’re in an odd place. There is cheap accommodation to be had, but not usually as extreme as I got. I paid 120 baht ($4 US) for a single with shared bath at a little mom and pop guesthouse. You can get simple but adequate doubles for $15-30 US. Dorm beds are even cheaper.

A bowl of noodle soup on the street runs about a dollar. Pad Thai nearly the same, maybe a little more. Half a pineapple from a street vendor—about forty cents. Coffee from a street vendor, $1; in a western-style coffee shop, maybe $3. Dishes in a restaurant start at about $5-6.

An hour-long massage will set you back $8—Thai massage, foot massage, oil massage, whatever you like. Taxis are cheap. The meter starts at  little over a dollar. Tuk-tuks can be more expensive depending on how you negotiate. The currency is the Thai Baht and 29 of them currently make one US dollar.

Like it or not, sex tourism is part of the fabric of Bangkok and it has been ever since before US GIs used this city for R&R from the War in Vietnam. There are two main areas to go for this: Phat Phong and Nana. Even though prostitution is technically illegal, sex is big business and it’s here to stay.

Walking through either area some evening, men can expect to be attempted to be lured into every strip club and go-go bar by “bar girls” standing outside each of the bars. This is the closest men will come to being sexually harassed.

Medical Tourism is also part of modern Bangkok. Top-notch medical care can be found for low prices at three big hospitals in the city. In fact, my first trip to Bangkok in 2003 was for surgery. Many are flying from overseas to get both necessary and elective medical procedures done.

Ladyboys are another phenomenon in Bangkok. Not only is homosexuality accepted here, but open transsexuality is as well. Some are cross-dressers, some transgender, and others transsexual—and there are plenty of hospitals in Bangkok that offer procedures to transform these men into women.

There’s enough in Bangkok to keep the tourist happily sightseeing for a few days. The National Museum, the Grand Palace, Wat Pho (temple with reclining Budda), all located in close proximity to the Chao Phraya River. Across the river is Wat Arun, or Temple of Dawn, a serene Khmer-style temple.

Chinatown is great for shopping, eating and walking around, as is the gigantic Chatuchak weekend market. Another good quickie is the Jim Thompson House.

Something of a site to witness is that of Khao San Road—Bangkok’s backpacker ghetto. It’s something of a cross between beach boardwalk debauchery and frat party gone wild. It’s the area of town with much of the cheap accommodation and bars, restaurants, and shops have sprung up accordingly to cater to backpacker needs and wants.