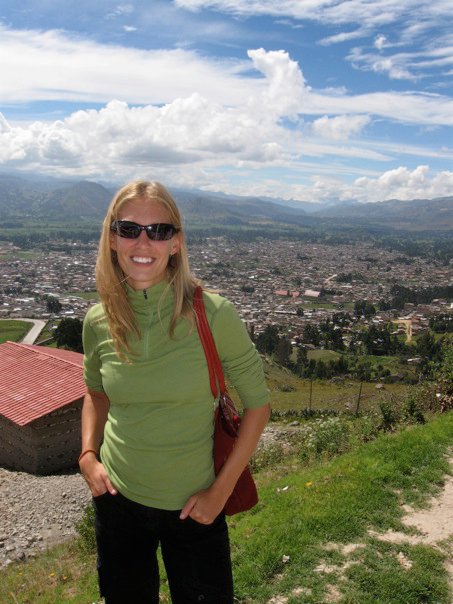 In January, 2010, Charlie and I moved to Lima, Peru with two suitcases and our dog, Brandy. I left my family, friends and career for an undetermined amount of time having no idea what it would be like to live abroad. My goal was to quickly learn Spanish and take advantage of every opportunity that came my way.

I have spent more than four years living as an American in Peru. I have learned Spanish, worked in the Amazon rainforest, started an English school, run a couple of marathons, made dear friends and became a mother.

These years have also been difficult. My Mom passed away from cancer, I battled depression and grief alone, we got evacuated from our home via helicopter, I got sicker than I’ve even been and suffered from extreme frustration with a different culture. All of these events, the good and the bad, happen in life. They just happened to me in Peru and in the end, I wouldn’t change a thing.

More than four years later Charlie and I are leaving with our daughter Amelia, our dog Brandy (who I can’t believe is still alive), a shipping crate filled with everything we’ve accumulated, some of the craziest stories you’ve ever heard, and a few lessons I hope I never forget.

To be honest, before living in Peru, I took my family for granted. To me, the word “family” meant a large group of people who were always around and sometimes annoying. In Peru, I learned about a culture that builds their lives around family. Adults live with their parents often until marriage and sometimes afterwards. They spend entire days together going to church, relaxing, playing soccer, talking, and drinking. The importance of family seems to rank highest among all values, which is something I viewed as a significant difference between Peru and the USA.

I am fortunate enough to have an enormous extended family as well as a handful of people who are close enough that I hold them in the same regard. I have learned that no matter how far away I travel, this family of mine will always be in my life. Despite me living in Peru, they continued to hold me close. They sent packages, read my blogs, wrote emails, learned how to use Skype, surrounded me with comfort when my Mom passed away, showered me with everything I didn’t know I needed when I was pregnant. Some even made the long journey to visit us. Throughout it all they continued to ask me when I was coming home. When I announced my upcoming return they shared in my excitement.

From Peruvians, I have learned the importance of family. Now my family, the ones that have always been around, the ones that drive me nuts, the ones that carried me through some of the best and worst times of my life, are the only people I want to be around.

Speaking of family, it would be careless not to mention my companion throughout this wild ride in Peru. To any couple that wants to strengthen their relationship, I suggest you leave everything that makes you feel like yourself and move far away to a foreign country. Oh yeah, and have a baby while you’re at it.

It was NOT an easy way to start out a marriage, but it was the BEST way to start out our marriage. Upon arrival Charlie and I quickly became dependent on each other for companionship, support, a break from speaking Spanish and just about everything in between. We figured out our roles in the relationship, and fought over them and refigured them and fought some more. At the end of a hard day we only had each other to vent to. At the end of a great day, we would buy a bottle of champagne and celebrate. We explored Cajamarca on a motorcycle, ate and hiked our way around Peru and traveled to a few other countries in South America. We took care of each other through really gross illnesses and really bad hangovers. On October 25th, 2012, we checked into Clinica Miraflores with a backpack and a bottle of Pisco, and left four days later with a healthy baby girl.

Sure, this is what we agreed to when we mumbled our compulsory wedding vows in the rain. But we had no idea what type of adventure we were about to embark upon. Starting out in Peru far from our support networks forced us to be each other’s everything. I came to Peru with a new husband; I am leaving with my partner through it all and our greatest accomplishment so far; Amelia.

About having and wanting…

When I lived in Cajamarca I learned about the simple life. My neighbors lived in mud and grass huts, some without electricity or plumbing. They cooked one big meal each day; lunch; and took a three-hour siesta during which schools, shops and businesses closed. Everyone went home and spent this time with their families. Kids played soccer and volleyball in the street with the same deflated ball, which they all shared. People lived simple farming lifestyles. These were the families of the children who came to my English school appropriately named Mundo Maravilloso (Wonderful World).

In my mind, these kids were disadvantaged. They didn’t have the same opportunities I had growing up. The public school system was horrible. Forget IEP’s, children with disabilities were lucky if they could even access the school. I spent hours fuming after I asked one of my twelve-year-old students what she wanted to be when she grew up. “I want to have lots of babies.” She replied enthusiastically. Didn’t she want to go to college? Have a career? Move up in the world? Make a better life for herself?

I’ve heard that the happiest people in this world are the ones with the least possessions. When you don’t know what you don’t have, or when possessions and opportunities seem unattainable to the point of impossible, it may be easier to appreciate what you do have. Time. Soccer. Family. Pollo a la Brasa. May I remember this next time I pine over yet another pair of Lucky Brand Jeans.

An American in Peru…

The fact is that no matter how much effort I put into integrating myself into the country and the culture, no matter how fluid my Spanish becomes or how many Peruvian friends I make, I will always be an American in Peru. People will always stare at me when I go out in public. They may even point or say the word I’ve heard hundreds of times “Gringa!”

It makes me think a lot about how we treat foreigners in our country. When we meet someone from another country at work or at the Laundromat, do we stare and silently wonder what they are doing here? Or do we strike up a conversation and make them feel appreciated and welcome? Do we criticize them for not learning English fast enough, or well enough? Or do we do our best to communicate with them using gestures and what few words we know of their language? Learning a foreign language is hard! How many languages do you know?

When I met Gaby, she took me shopping to buy things I needed for my apartment, introduced me to her family and invited me to join her running group. Years later she was the first one to the hospital after Amelia was born. Friends from Charlie’s work welcomed us to Cajamarca by inviting us over and serving us traditional Cajamarquino dishes. When we visited Arequipa, Charlie’s co-worker (whom I had never met) invited us to stay in his own home, took us on a tour of the city and for a four-course meal at a local restaurant. Violeta, a woman I met at the Laundromat in Cajamarca invited me over for lunch after I told her I had never tried Pachamanca. Her entire family came and she prepared the traditional meal. When Amelia was born, our friends pooled money together and bought us a crib. In the hospital, we were showered with visits from friends as well as people I hardly knew. The list of kindnesses bestowed upon us from the moment we arrived go on and on.

Sure it’s a generalization, but Americans as a culture are not known for their hospitality. Its ironic because the United States of America is one of the most diverse countries in the world and each citizen has immigration somewhere in their family history. After learning how difficult it can be to live overseas, I hope I can be the American who embraces the foreigners I meet helping them feel welcome. After reading my blog, I hope you can too. Remember, every person you meet has a story and it’s probably a good one. If you ask the right questions, maybe they’ll tell you.

There will be days when I will miss Peru. I loved looking out my window and watching the clouds creep over the mountains into the valley of Cajamarca, waking up to the sounds of a million Amazon birds, or buying perfectly ripe mangos and avocados at the Mercado for less than five dollars. Watching the Campesinas (country women) in their traditional clothing with a baby on their back walking ten sheep and five cows to the nearest pasture is something I will never see in New Hampshire. I will miss speaking Spanish. I will miss running around Lima with Gaby, singing pop songs out loud to keep us going and swearing under our breaths while doing abdominal exercises at 5AM. I will miss eating really good food with Vanesa and sharing stories about our families.

Alas, I’ve never been one to focus on goodbyes, rather to look ahead at what’s to come. It’s time for me to go. I’m ready to start anew again. Ready to return to my career as an Occupational Therapist, and to live closer to my friends and family.

Goodbye Peru. Thank you for all of it.

***Goodbye readers. Thank you for following.

15 thoughts on “Goodbye Peru: After Four Years Living in Peru”