A Photo Essay of Cajamarca, Peru

Charlie and I just got back from a long weekend in Cajamarca, where we celebrated my husband’s 30th birthday. Cajamarca is the city nearest to Cerro Corona, the mine where Charlie works, which is about a tw0-hour drive from the city.  Although Charlie knew he liked Cajamarca, he had never spent much time in the actual town as he’s usually only there for an hour or two between arriving at the airport and going to the mine.  I met Charlie there on a Thursday, and from the moment my plane landed in the middle of the cow field, I fell in love with the place.  Being surrounded by trees, mountains, and green farmlands was just the start of it.  One of my favorite things was being able to walk around without hearing the whistles, kissing noises, and disrespectful comments from Los Hombres.  It is far safer than Lima.

Cajamarca does not attract many international tourists.  One day while we were walking around in town, Charlie started laughing, when I asked him why he pointed out a group of women who were staring at me like I was an alien from outer space.  The lack of tourism may be one of the reasons there are less “predators” looking for gringos to take advantage of…there’s just not a market for this type of work there.  The tourists that do go to Cajamarca are mostly Peruvian tourists.  Perfect, very few gringos and enough of a tourist market to necessitate several tour companies centered around the central plaza.  We took three different trips with the same company to see some of the areas outside the city.  The prices were extremely reasonable, the groups were small, and the tours were in Spanish.
I have never fallen in love with a place as I did this past vacation.  Charlie and I are investigating the possibility of moving there.  We felt it suited us more than the big city.  Although we would no longer be able to eat in fancy restaurants, take Spanish lessons, or go to Starbucks, we feel prepared to leave behind the conveniences of a city.  The possibility of hiking and camping on the weekends, and trail running rather than on cement makes it far more appealing. 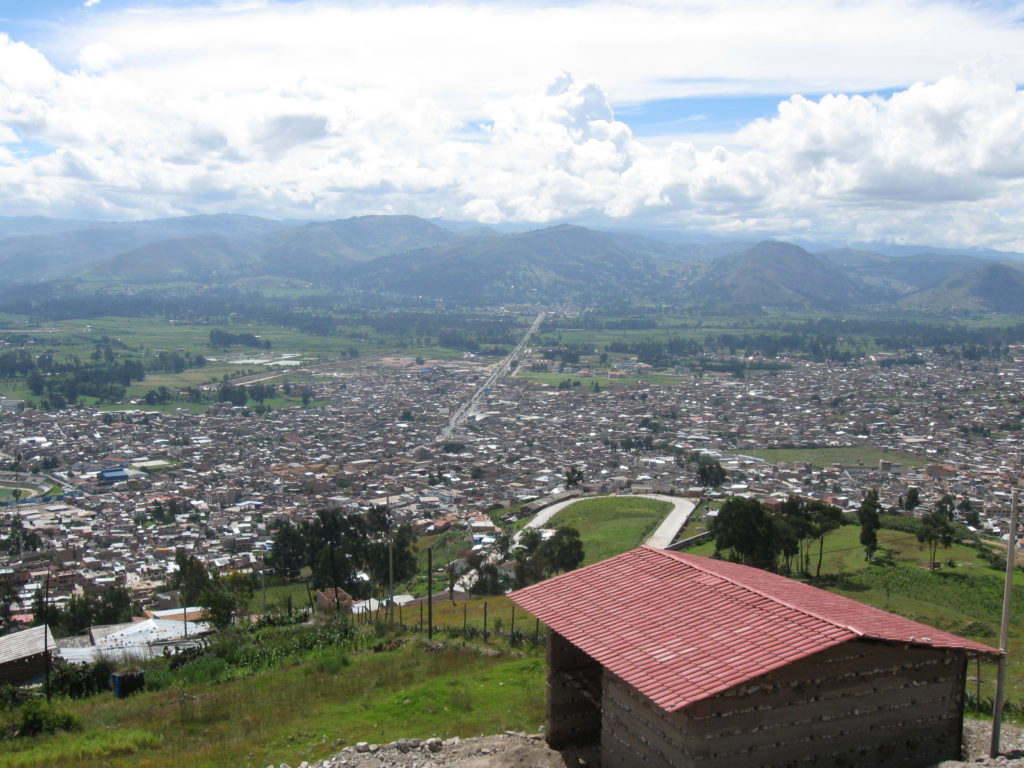 Cajamarca
Population: 135,000
Elevation: 8858 feet above sea level.
Flight time from Lima: 1 hour
Location: Northern Highlands.  Bordered to the north by Ecuador, and to the south with La Libertad Amazonas.  Three miles away is the smaller town, Banos Del Inca, where we stayed for two nights.
Climate: Dry and sunny.  The average temp is 58 degrees.
Economic Activities: Livestock and Agriculture, and in recent years, Mining.  The American-run Yanacocha gold mine is located less than an hour from the city.  It’s the second largest gold mine in the world producing $7 billion worth of gold to date.
Historical Significance:  Atahualpa, the last living ruler of the Incas was captured and killed there by the Spanish Conquistadors (more on that later). 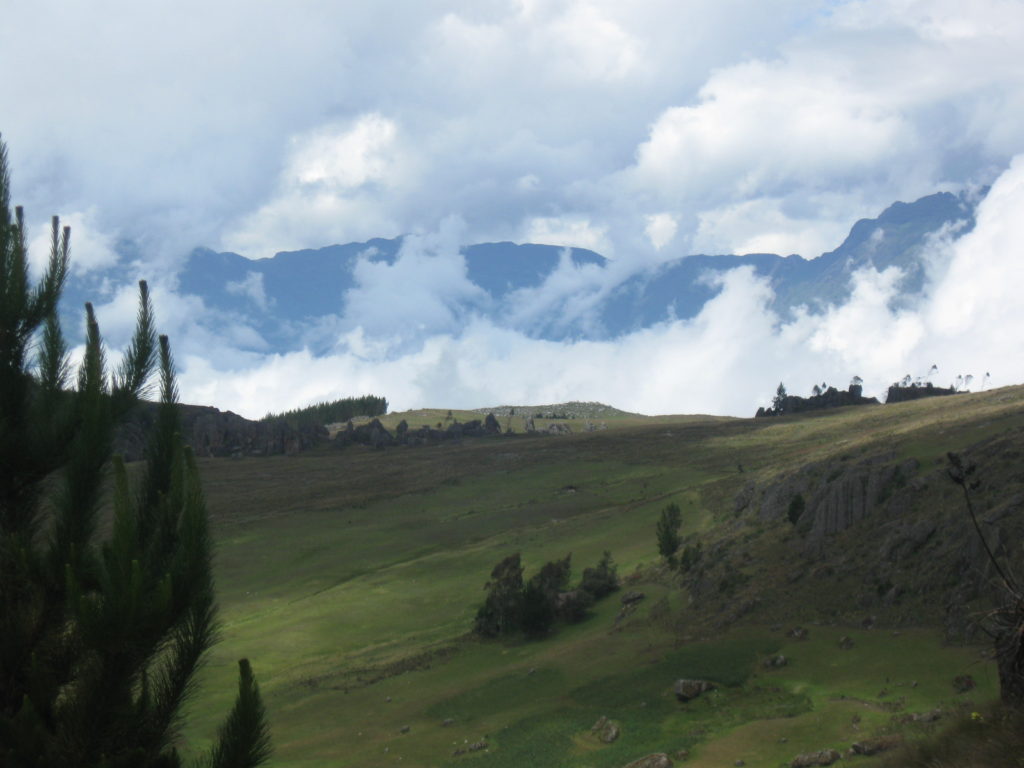 My first day there, we went with a guide into Cumbe Mayo, about 20 km from the city.  We had a beautiful two-hour hike through a series of natural rock formations that were said to have looked in the shapes of animals, pyramids, and other various objects. 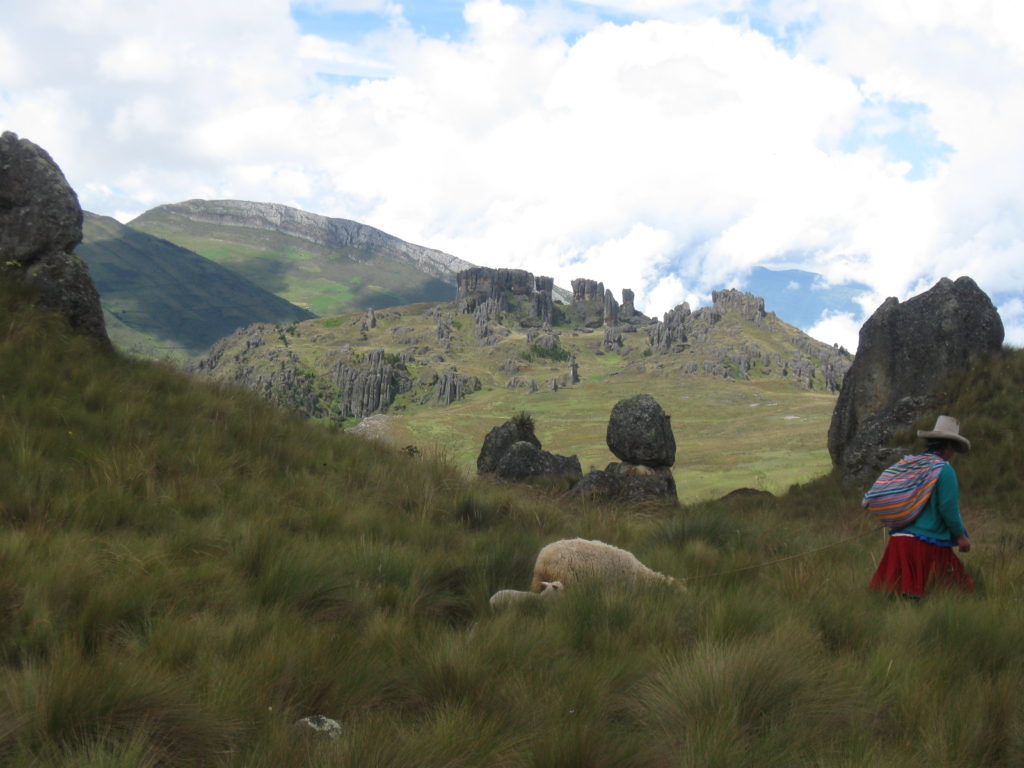 The scenery was gorgeous and it felt great to be outdoors hiking. 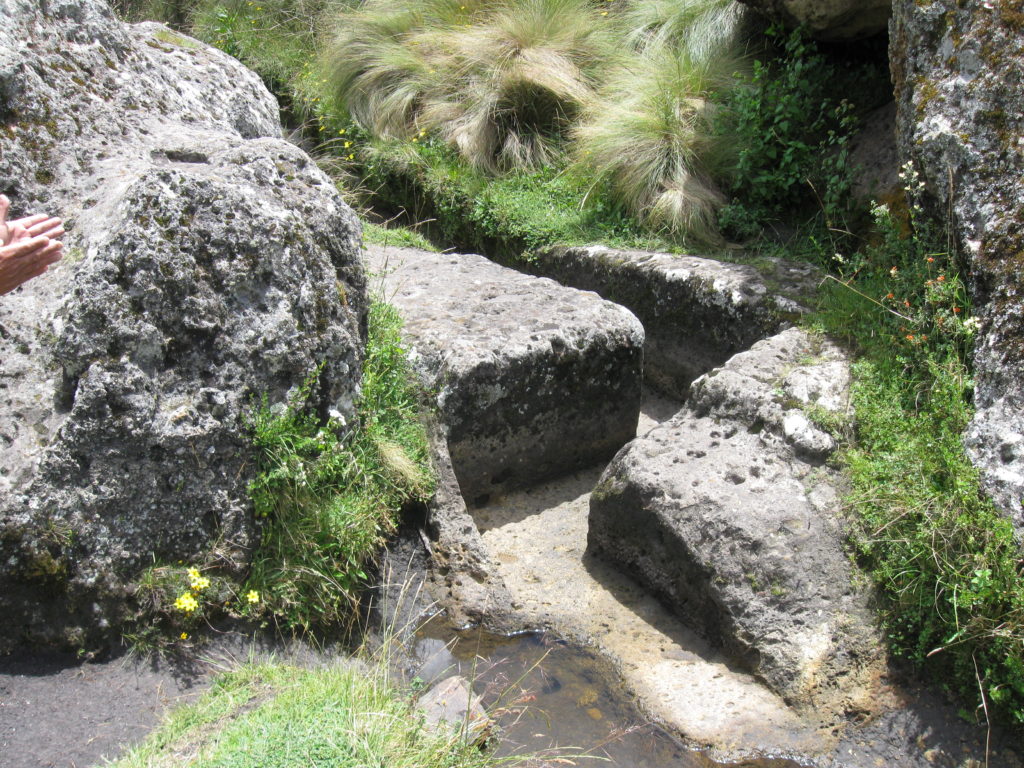 We learned that name comes from the Quechua Kumpi Mayo, which means “well-made water channel.”  We viewed the 9 kilometers of aqueducts that were carved more than 2000 years ago by pre-Inca civilizations.  They were carved smoothly into the rock, making perfectly right angles as they zig-zagged their way through the valley. 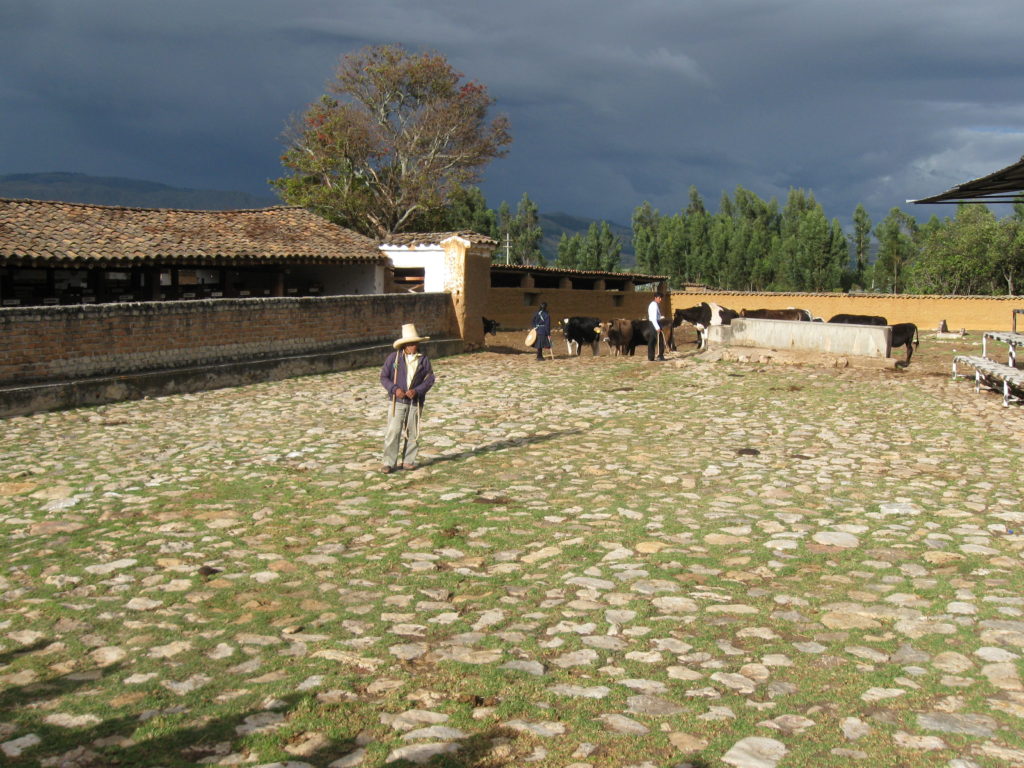 Hacienda la Colpa is a working cattle ranch we visited on our second day.  With all of the livestock in the surrounding areas, Cajamarca has some of the best cheese in all of Peru.  Charlie makes sure to bring some back with him when he returns from a stint at the mine. 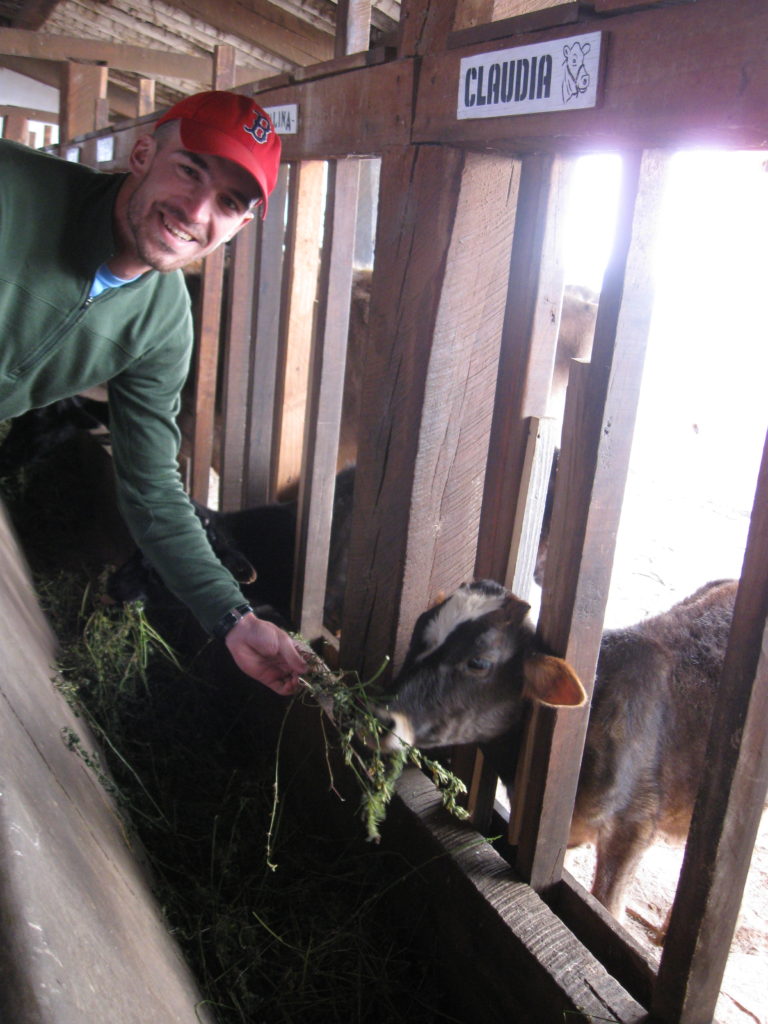 This farm is famous because the rancher can call each cattle by their name.  They in turn go to their own individual stalls.  Claudia, the calf was one stall off, but quickly corrected herself. 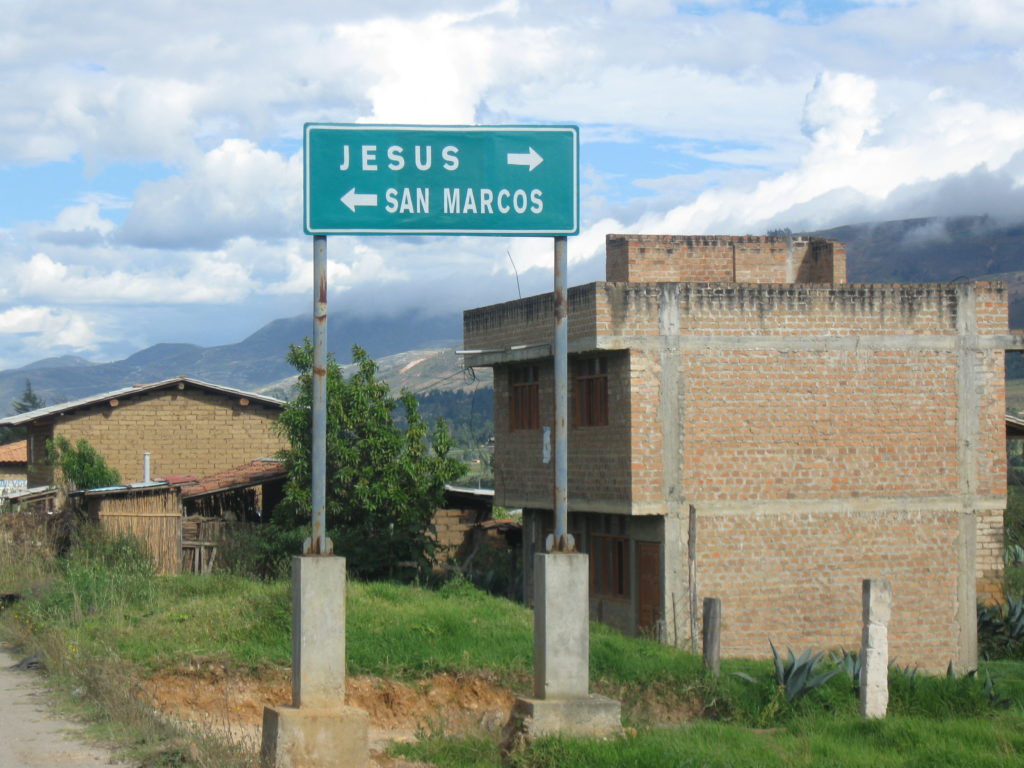 After visiting the farm we proceeded to a trail head from which we hiked to see two beautiful waterfalls.  On the way there, we wondered where Jesus was.  Fortunately we saw a sign to help us find him.  And you thought he was dead! 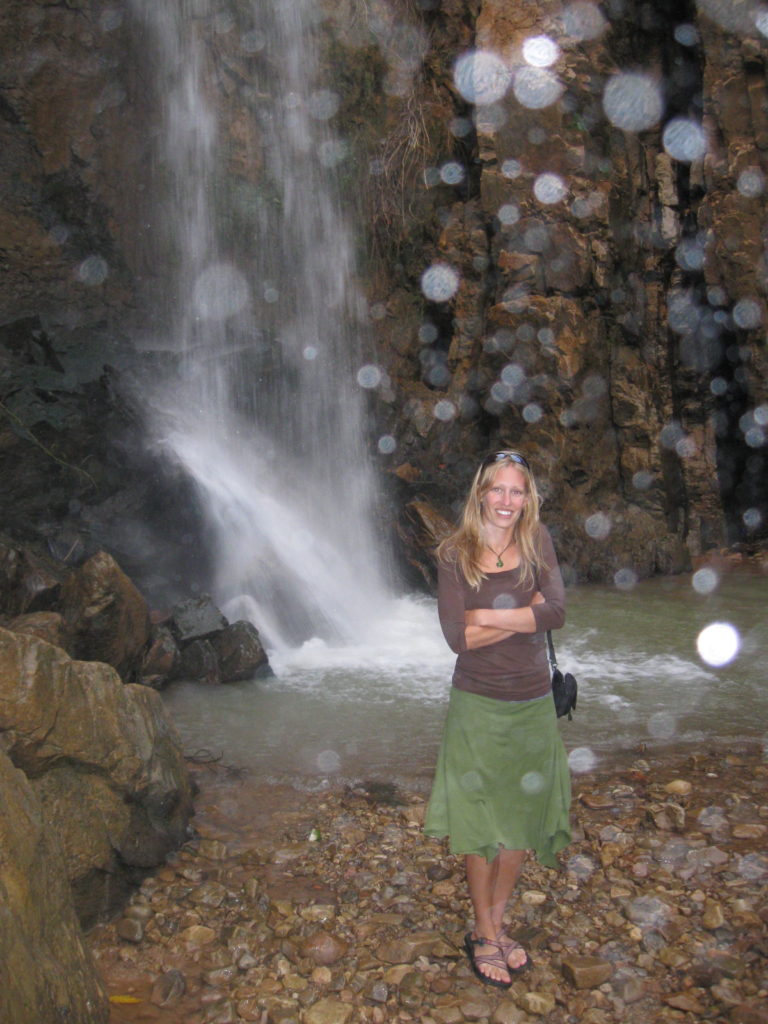 As you can see, thee water was coming down strong and splashing on my camera! 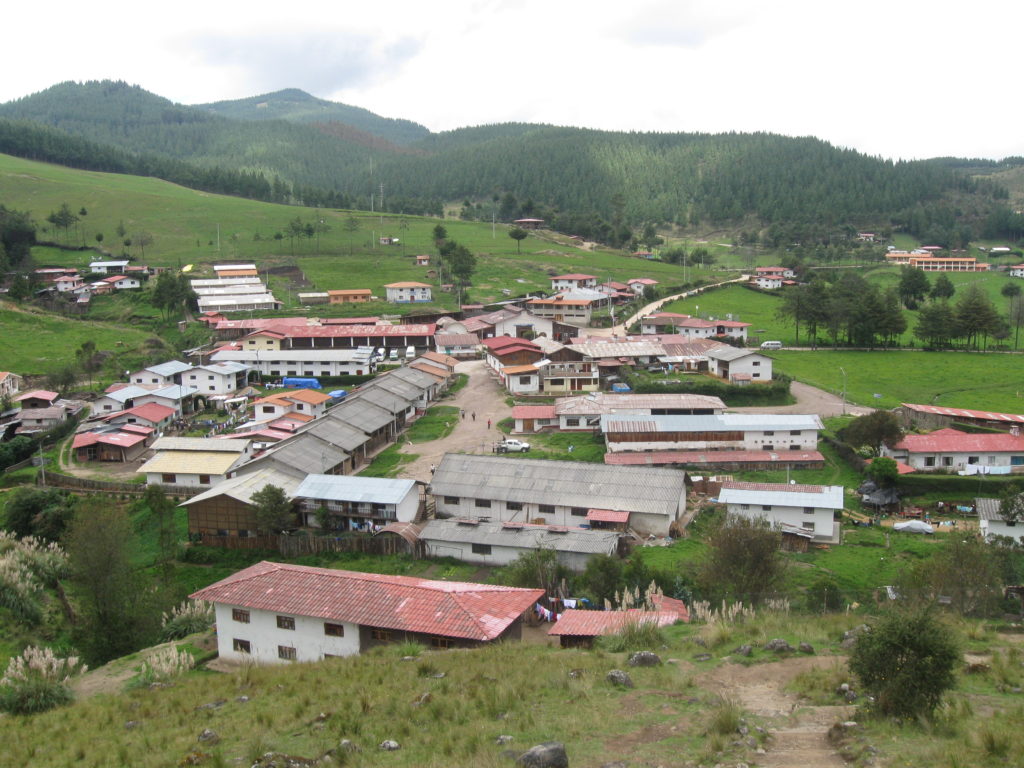 Our third day, we visited Granja Porcon.  This is a successful cooperative that houses 53 families who all contribute and take stock in the exports of the farm.  Since they don’t allow new members into the coop, marrying between families is encouraged and common.  Incest is best!  I had a dream once that mom made me marry my brother.  Gross!  No offense, Brent.  Members recently decided to allow tourists to visit, and added a zoo and small 10-room hotel to their community.  The drive there took us through beautiful wooded forests.  We drooled over the idea of taking backpacking (trekking) trips through them.  Apparently getting a permit to camp in that area is fairly simple. 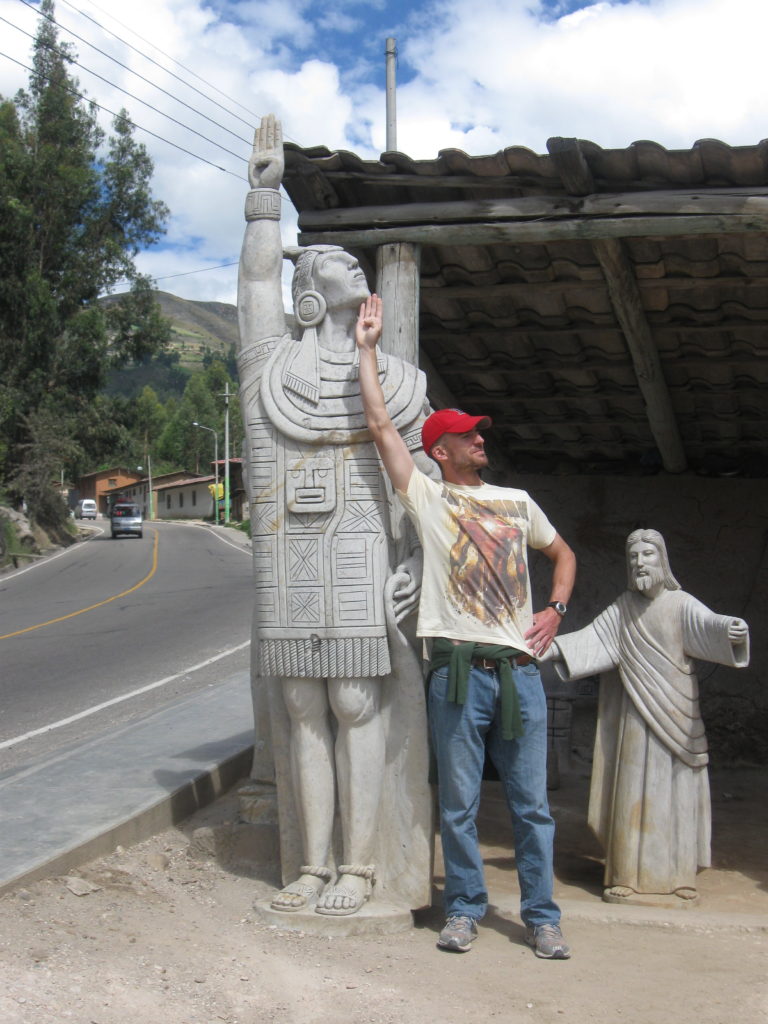 On the bus ride there, we stopped to see the work of some stone carvers in the area.  In this photo, Charlie is standing in front of the Inca leader Atahualpa.  Cajamarca has historical significance because its essentially where the Incan empire ended.  In 1952, Francesco Pizarro’s 160 Spanish troops armed with cannons and swords slaughtered 7000 Indiginous people who’s slings and axes were no match.  The Spaniards captured Atahualpa and held him for a ransom for more than a year.  What the Spanish sought was gold, and soon hoards of it began coming in.  Indiginous artifacts and ornaments were melted down to 6000kg of gold and 12,000 kg of silver that would now be worth more than $60 Million US dollars.  Despite the ransom, after learning that Atahualpa was sending for help from his followers in Quito, they killed him by strangulation.  That wasn’t very nice. 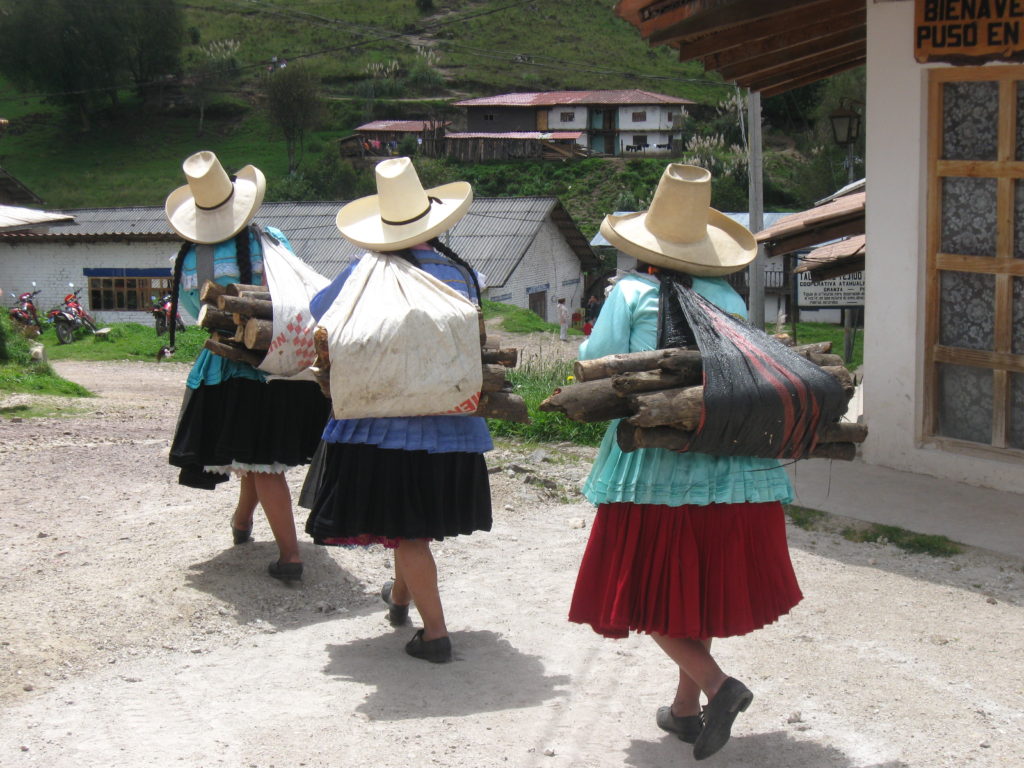 We saw women carrying bundles of wood and digging trenches.  I would be curious to know what the men do to pull their weight. 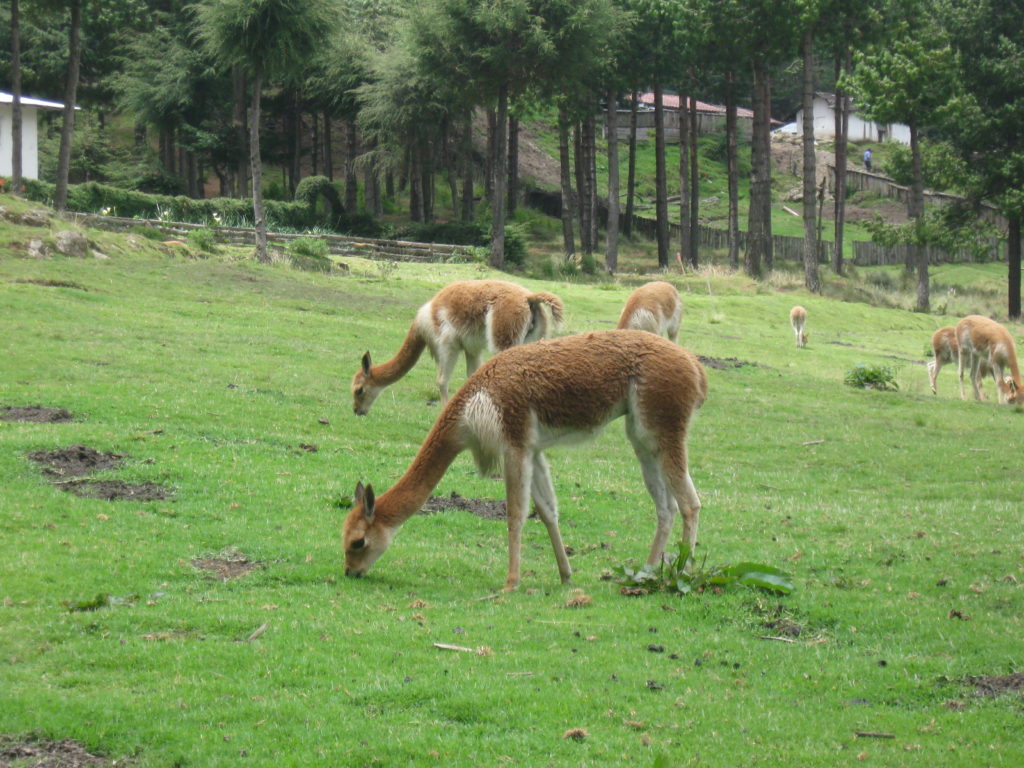 One of the most valuable exports from the farm is Vicunya wool.  Vicunyas are wild relatives of alpacas and their fur is sold for $500 US dollars per kilo. 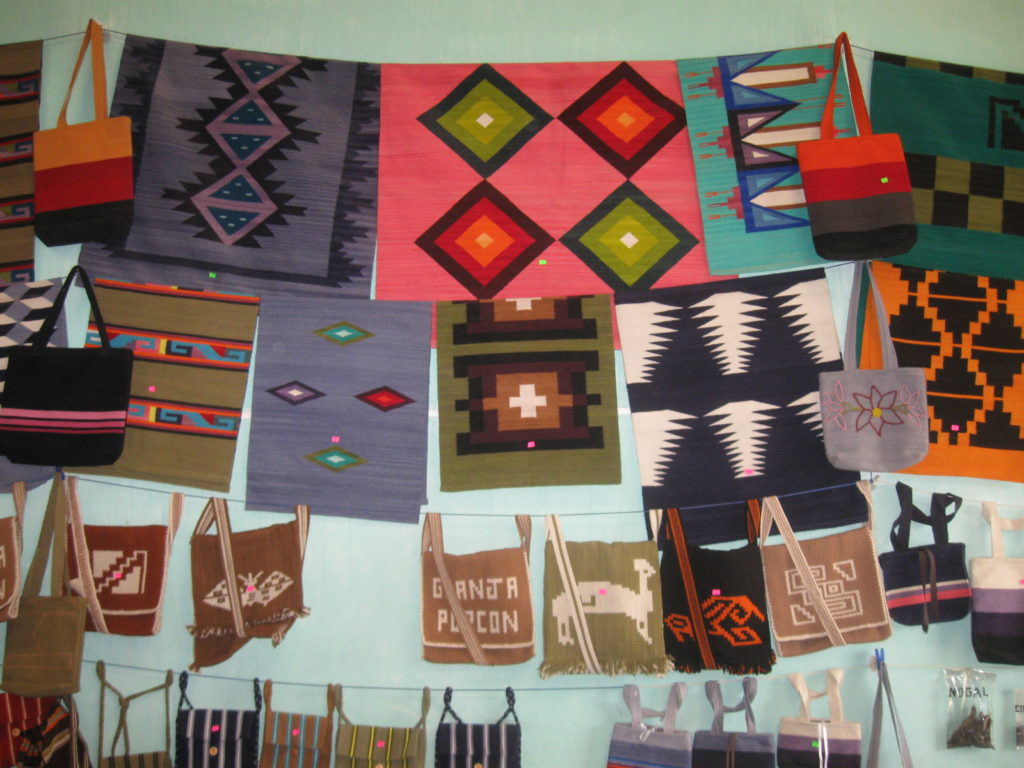 We visited a shop in the coop where the women wove beautiful rugs and blankets on looms.  They use yarn that they make themselves from sheep wool.  Most of the yarn is colored with natural ingredients from plants and insects. 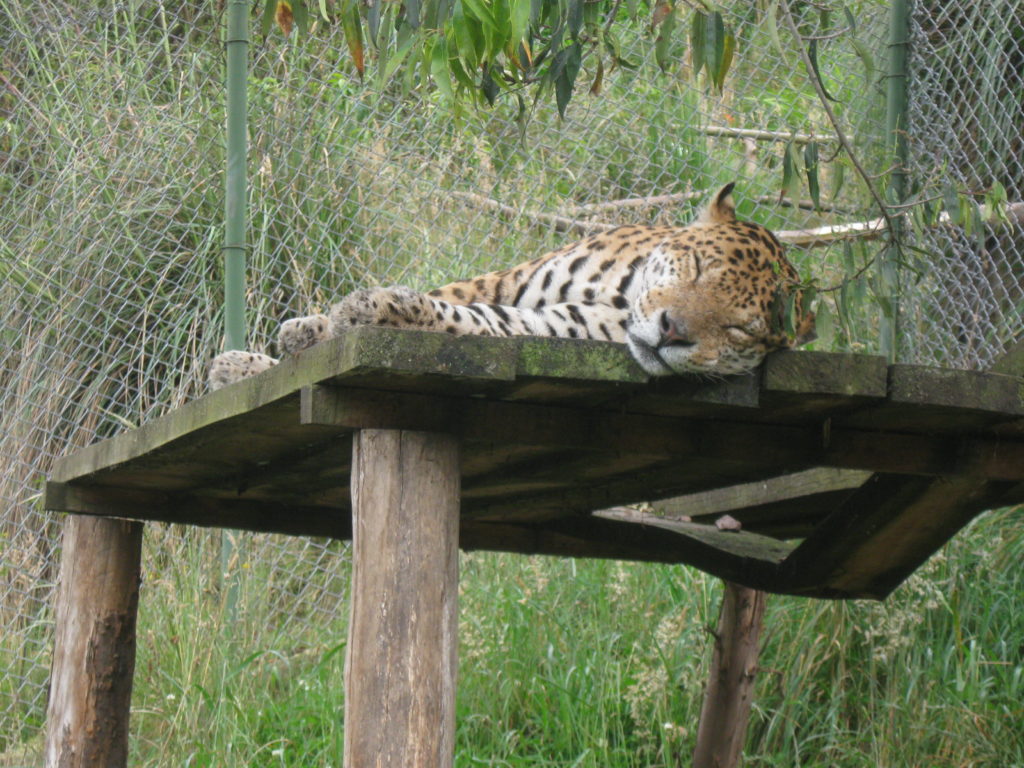 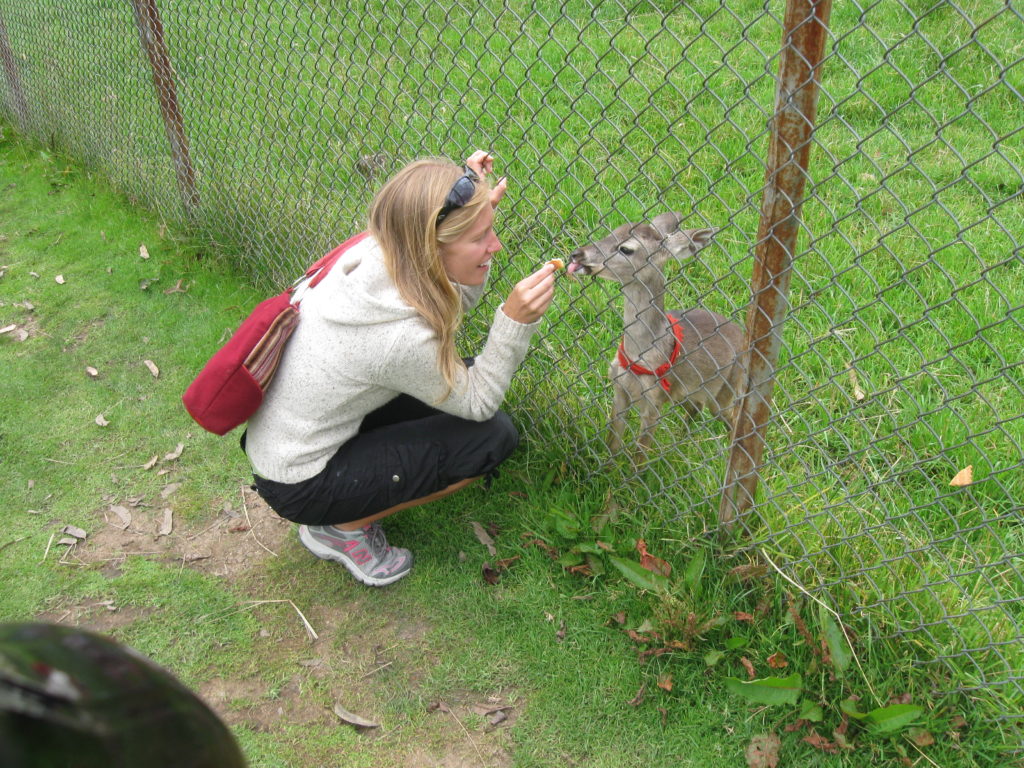 The zoo housed a surprising variety of animals including an enormous condor, a Puma, the Speckled Bear (only bear native to South America), Jaguars from the jungle of Peru, and the adorable little Peruvian deer that about a third the size of the deer we’re used to seeing in the States. 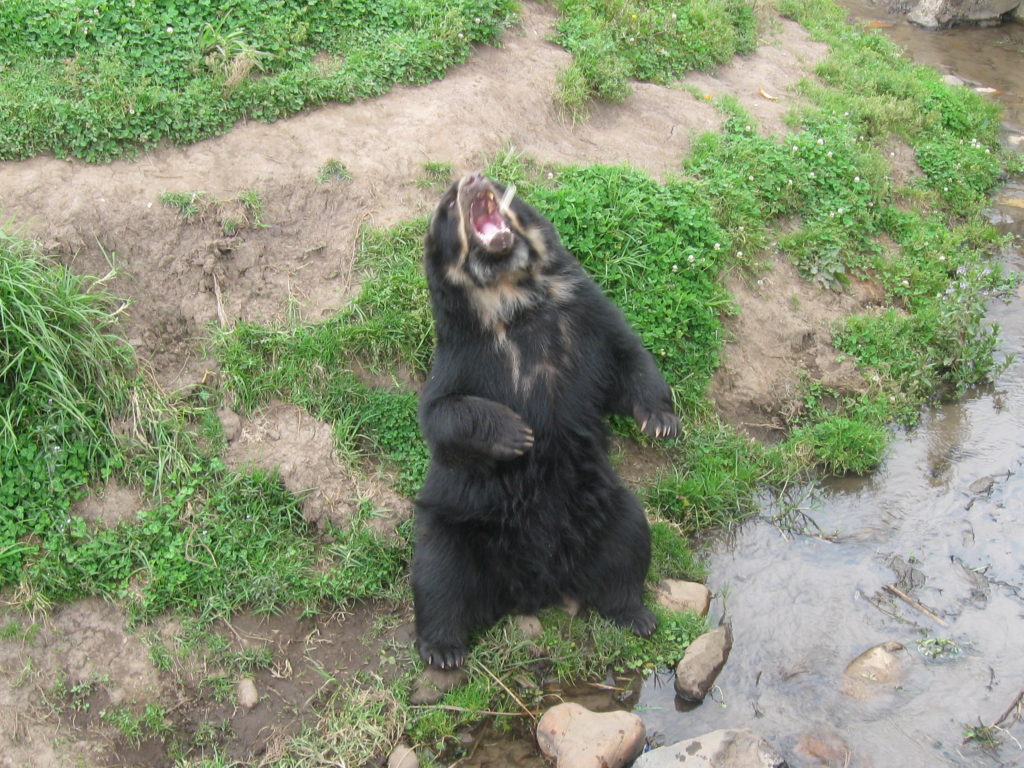 We were encouraged to feed bread to the bear, who opened his mouth and waited for you to throw it in, and the monkey who reached out through his fence to take the bread from our hands! 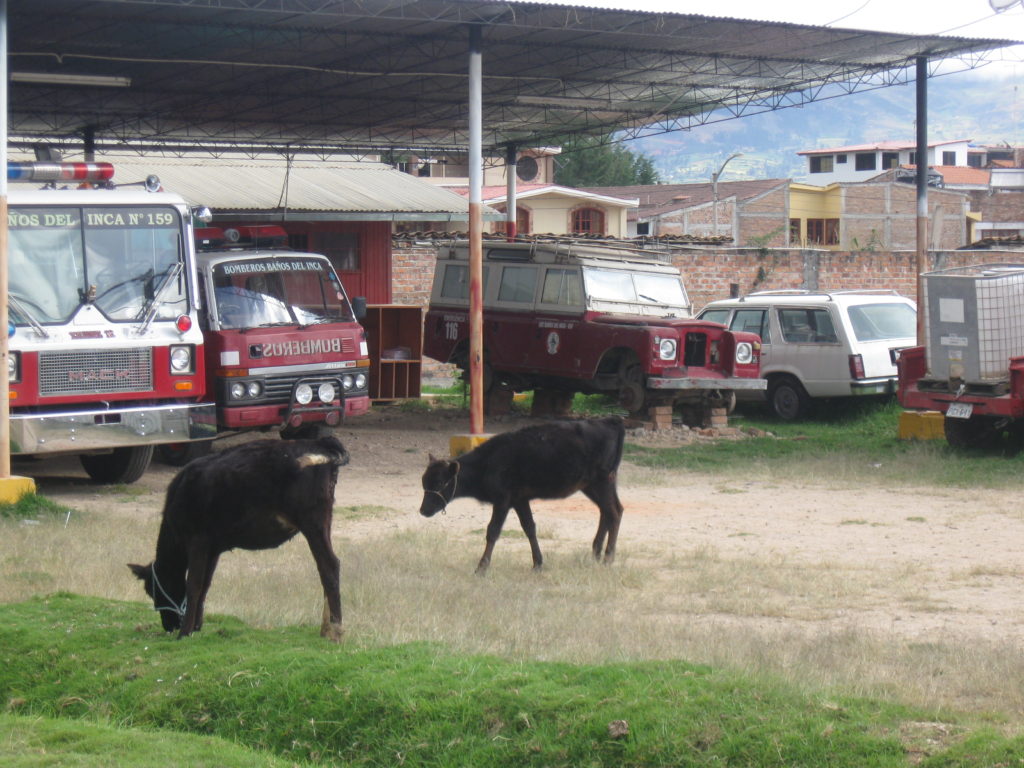 This is the local fire department in Banos Del Inca.  Complete with cows walking through the field. 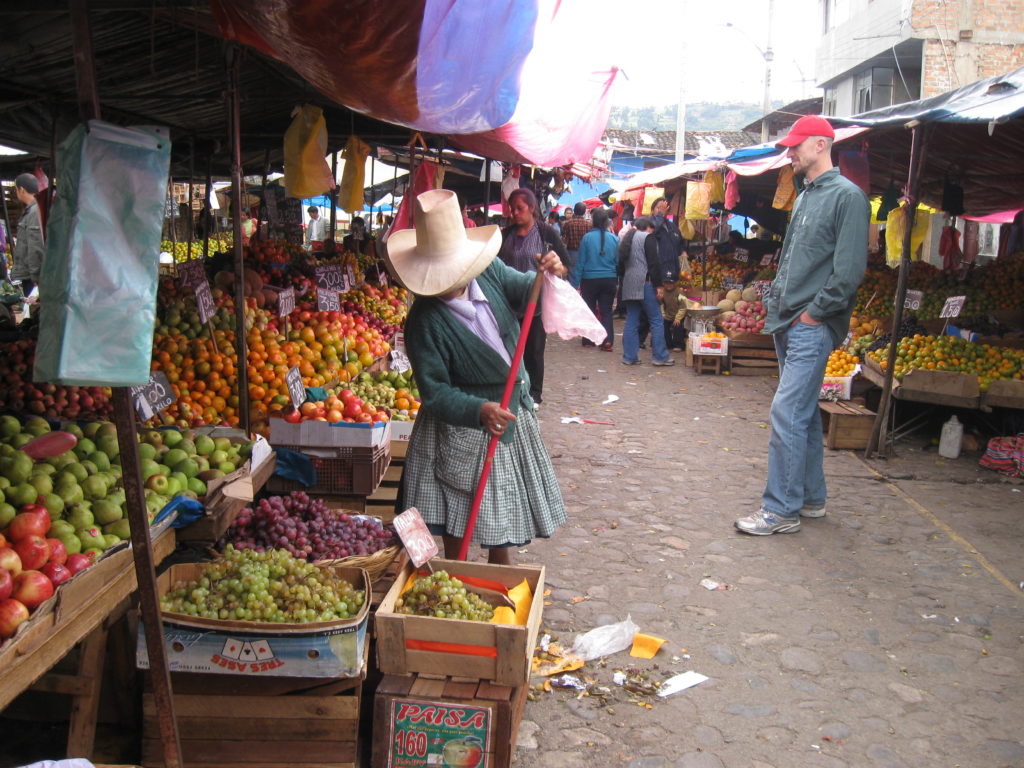 The fruit market is enormous and goes up and down both sides of a long street.  Cajamarca’s proximity to the jungle provides them with a large variety of fruits and vegetables. 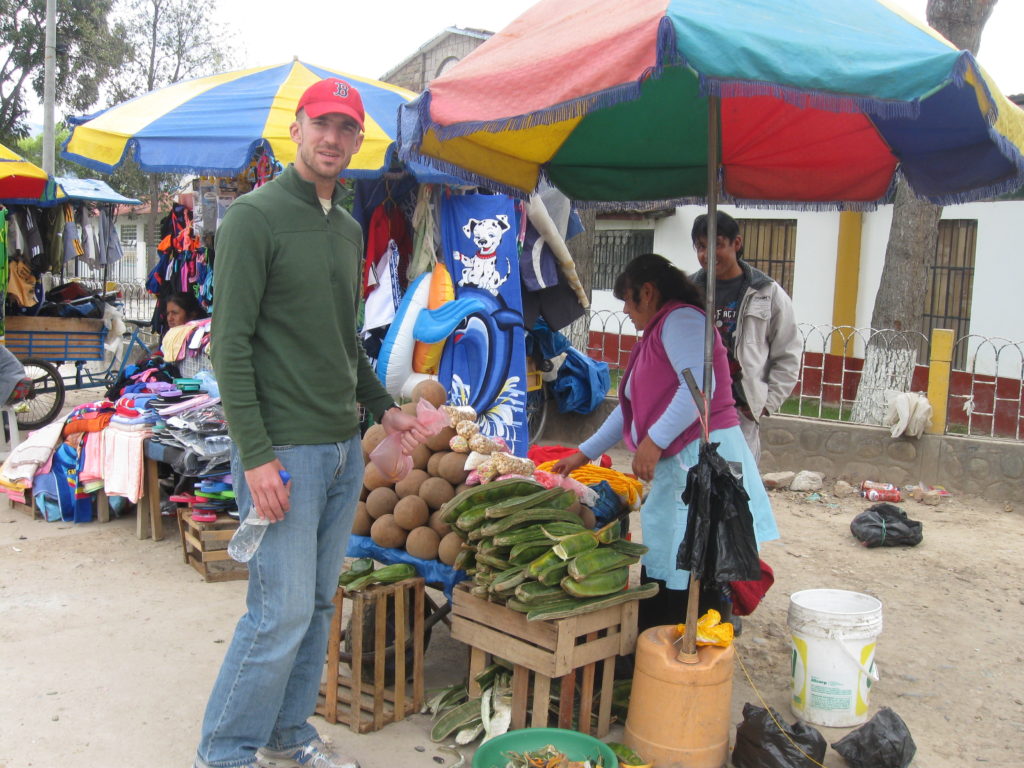 Here is Charlie standing in front of a woman selling Mamey and Pacae.  Two fruits from the jungle.  Mamey (not your Mamey) is the one that looks like a potato.  The inside is bright orange, and it has a sweet flavor and peach like consistency.  The Pacae is the green bean looking plant.  It has large seeds inside that are covered with a white fleshy substance.  You eat the sweet flesh, not the bean. 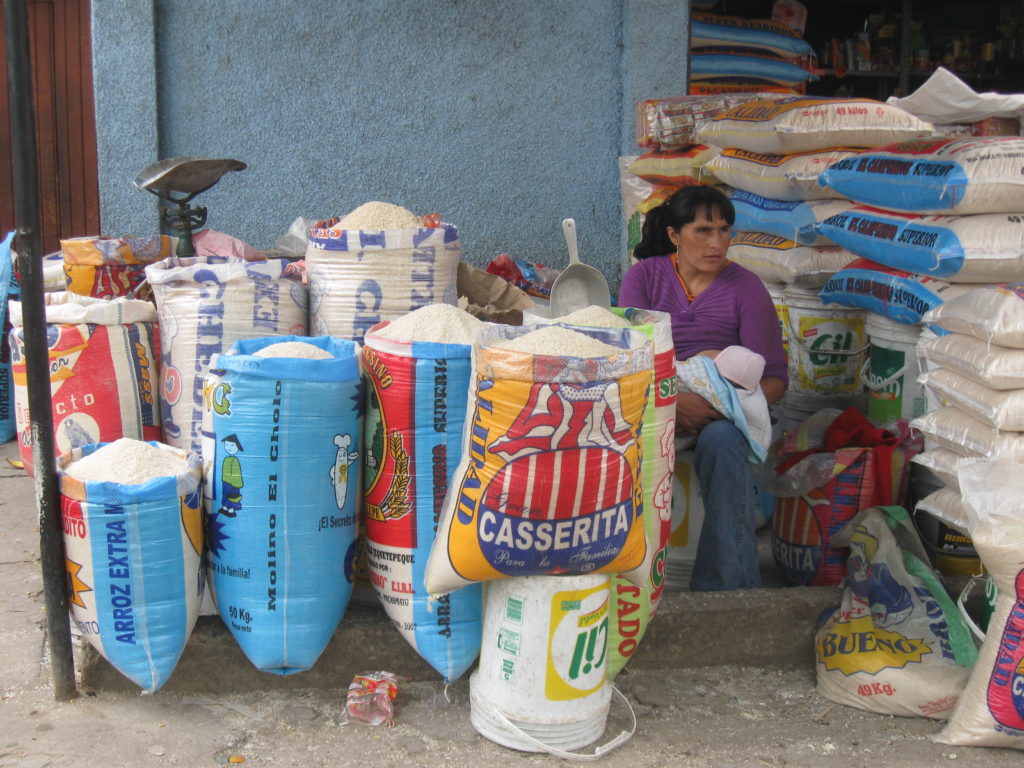 This is a woman breastfeeding while she’s selling different varieties of rice and grains.  Cajamarca got its first large grocery store “Metro” a couple years ago.  Before that, I think the majority of people used markets and small stores to get their food. 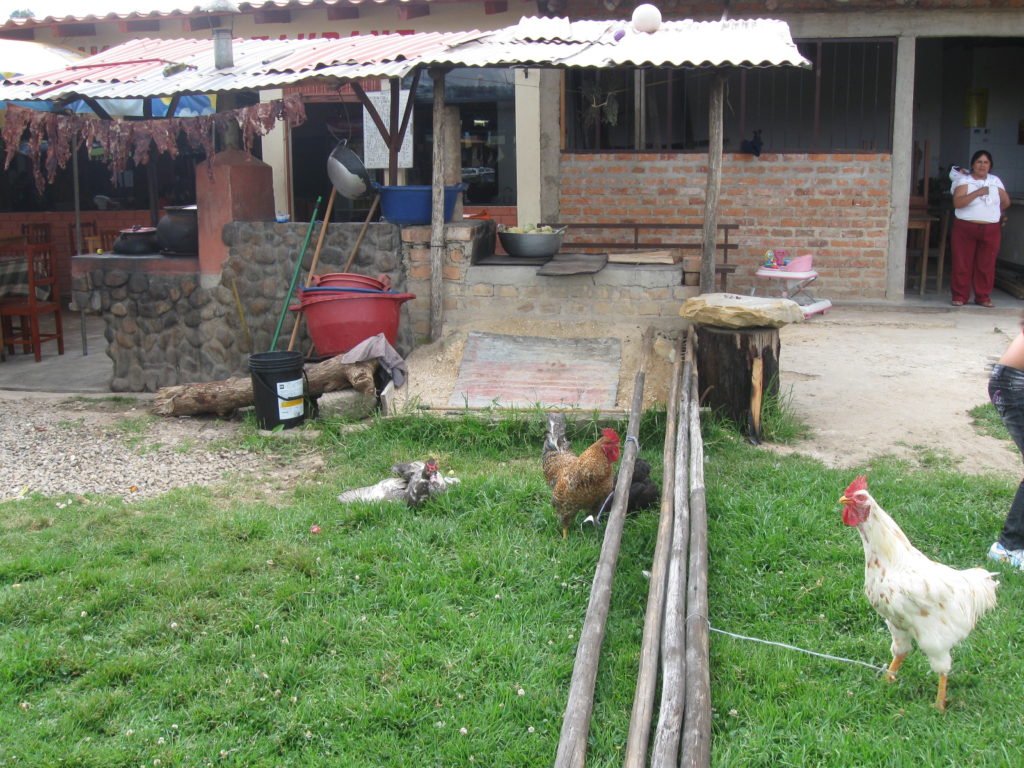 An outdoor “restaurant” that we ate at.  I had stuffed hen, Charlie ate curried pork.  Both were served with rice and beans.  The clothing you see this woman wearing is the typical dress of the campesinos (peasants).  In the city of Cajamarca, you see plenty of people dressed in typical jeans and t-shirts just as often.  But once you get into the mountains, most of the women are dressed in these wool skirts with petticoats and bright colored sweaters, always with their hair tied back in a long braid.  Their wide-brimmed hats are made from a very fine fiber from the palm tree and serve multiple purposes.  Other than keeping the sun out of their eyes, they use the hats to measure the good they trade.  For example, “I will trade you a half hat of rice for a full hat of beans.”
If we had ordered chicken, it would have been fresh!  These poor chickens were awaiting their demise. 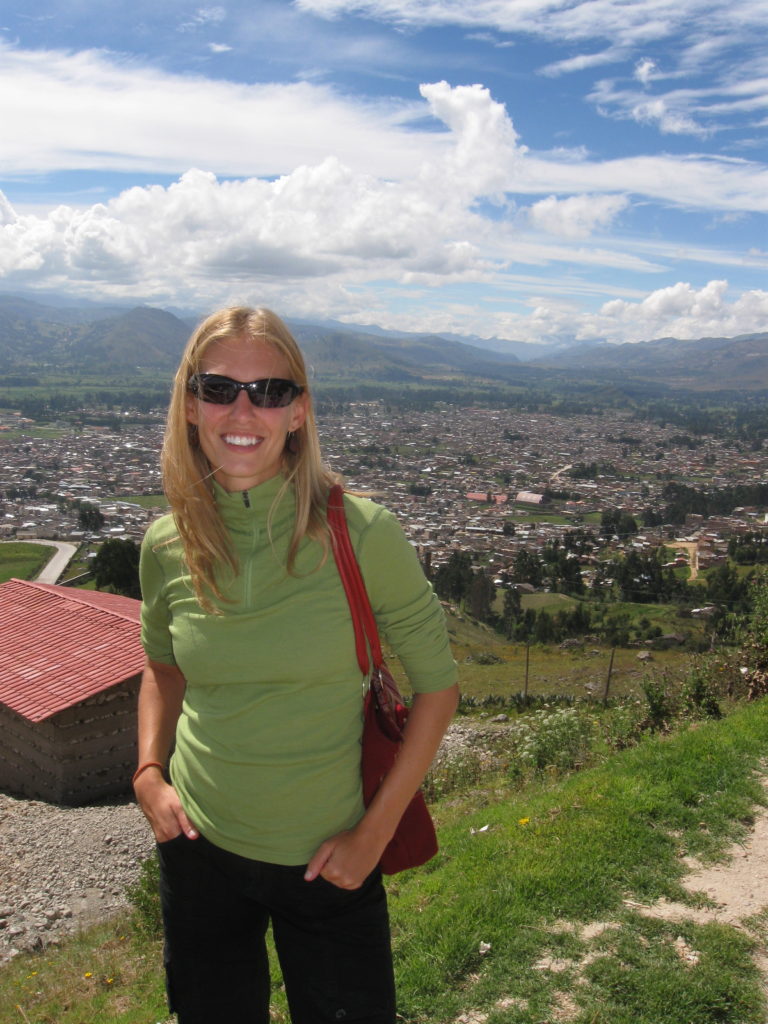 I think I belong here.

14 thoughts on “Why I love Cajamarca”