Ask GoMad Nomad: What to do on a layover in Athens, Greece?

This month’s ‘Ask GoMad Nomad‘ column on Athens Travel Tips comes from a situation we commonly find ourselves in – how to spend a long layover in a cool city. Reader Stephen B. is planning a trip to Europe, but has a long wait between flights in Greece and wants to get out of the airport. See below for our top tips on what to do on a layover in Athens, Greece.

I’ve got a layover in Athens of about 7 hours (6:45-13:25) on a Friday afternoon. Is that enough time to go into the city to see anything? How easy and cheap is the public transportation connections? What could I see in that limited amount of time? Any lunch recommendations? Any suggestions would be appreciated. If it helps, I was in Athens about 20 years ago, but I was 17 and don’t remember too much. Thanks!

Well Stephen, that’s always a tough question, as it can be hard to figure out how much time you’ll really have to explore on a long layover and what the best way to spend it is. This is a great way to explore a city, whether it’s your first visit or just a repeat pass through an already-loved destination, and we try to do it as often as is practical.

Luckily Athens is pretty well set up for this sort of thing, and so we absolutely encourage you to get out of the airport and explore the city! Local bus X95 leaves every 15 minutes from Athens airport to the city center at Syntagma Square, so your first task is to hunt down the next departure between airport exits #4 and #5. Hop on, pay your €3 to the driver, and away you go; the ride takes about 40 minutes, so assuming you manage to catch that 7:20 departure you’ll be in to the city center by 8am. (Taxis can save you a bit of time, but can run upwards of €50! Of course, this is good to keep in mind if you’re running short of time on your way back to the airport in the afternoon!)

One note – keep in mind that a lot of Athens’ historic sites either don’t open at all on Monday or are only open from 11am, so if that’s when you’ll be visiting it would be wise to scrap these plans and wander around the energetic Psirri neighborhood for the morning instead. 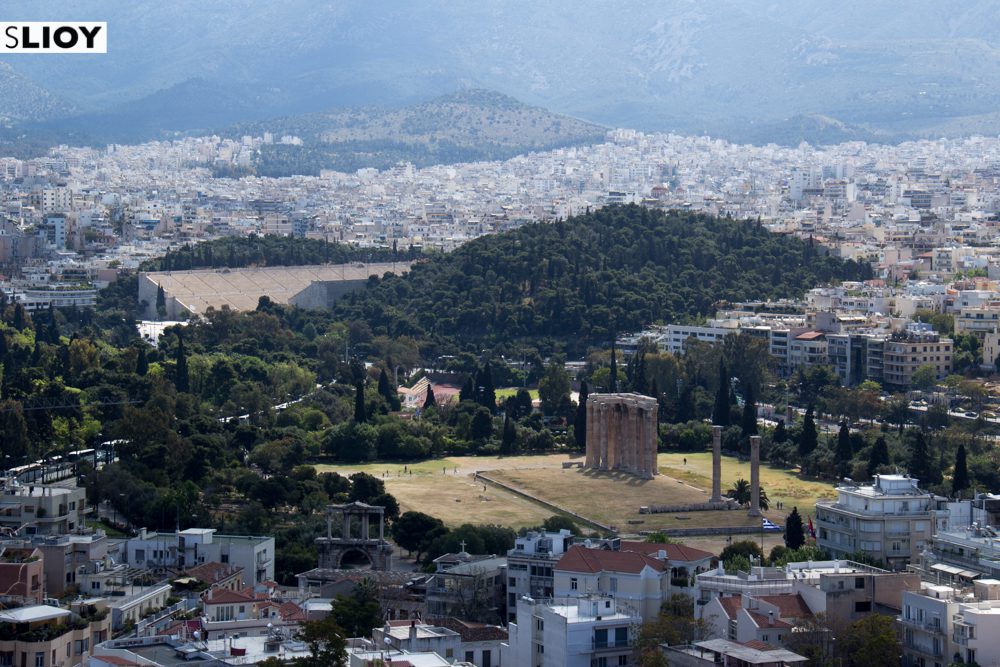 8am – Arrival to Syntagma Square

Syntagma Square is the heart of Athens, perhaps even the heart of Greece. The square has a long political history, the seat of the Greek Parliament is just to the east, and this is still the site of popular demonstrations protesting against government policy. If your bus arrives right on time, head towards the Parliament building and the Tomb of the Unknown Soldier, where around the clock at the top of every hour the Evzone soldiers  who stand ceremonial guard over the tomb perform a ‘changing of the guards’ ceremony.  If you happen to be arriving on a Sunday, it’s worth heading back here a little early for your bus to catch the more involved performance at 11am each week.

8:30am –  Hadrian’s Arch and the Temple of Olympian Zeus

After having a look around Syntagma, head south on the large street beside the Temple of the Unknown Soldier – it’s called Leoforos Vasilisis Amalias. Follow it for a few minutes, and soon Hadrian’s Arch will come into view – built in 131 AD by the Emperor Hadrian of Rome, this once served as an entrance into the walled city of Athens. Though the surrounding walls have since come down to make room for city infrastructure, the arch is still extremely photogenic and your next stop is just beyond. Construction of the Temple of Olympian Zeus was begun in 515 BC, though it lay unfinished for more than 600 years before it was finally completed in 129 AD – also by Hadrian.  The site has fallen back into a state of ruin in the ensuing millennia, but between the photogenically tumbled columns and the incredible amount of history embodied here it’s well worth the €4 entry fee. 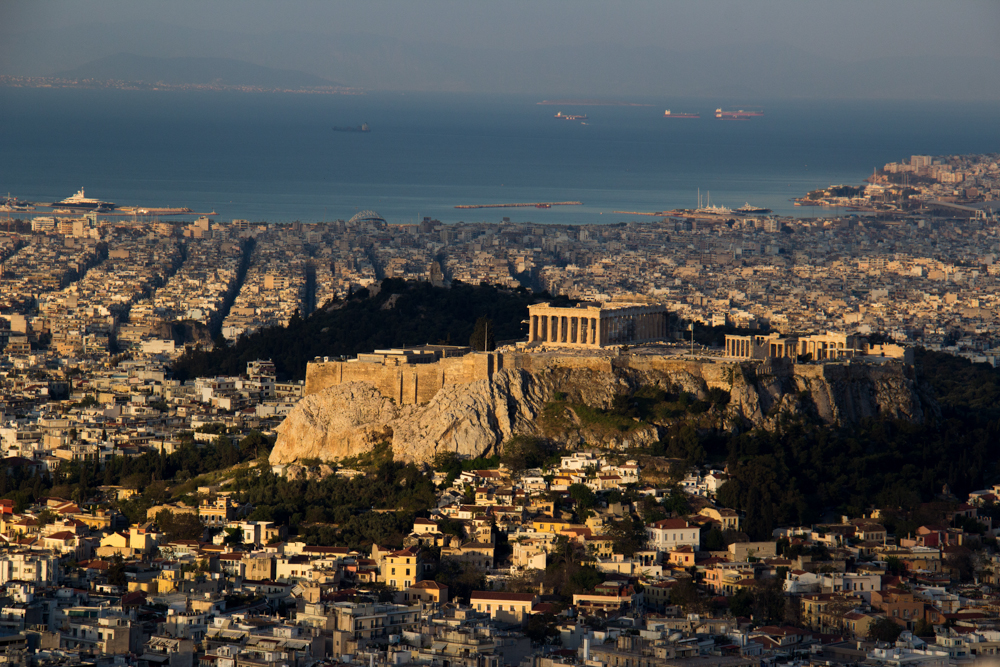 9:30am – The Acropolis and Parthenon

We bet if you remember one thing from that childhood visit to Athens, this is it: the Acropolis. Towering over the city, the Acropolis hilltop and the Parthenon temple that crowns it are the defining attraction of the city for most visitors. A center of worship, commerce, and celebration for at least the last 6000 years; today it is also a pilgrimage site of sorts as tourists from around the world come to explore these historic grounds. The importance, as legend has it, starts with a great contest between the god Poseidon and goddess Athena. Forced to compete for the patronage of the newly formed city, each was asked so show what they could offer the would-be devotees. Poseidon struck the ground of the rocky outcrop and water burst forth, while Athena presented a flowering olive tree; the colony’s citizens, seeing the commercial and sustenance value of Athena’s gift, dedicated their city to her. Though the Parthenon was actually built as a celebration of triumph over the Persian empire, several of the buidings on the Acropolis are indeed sacred space – particularly well-known is the Erechtheion, which is actually dedicated to both of the deities that once sought to curry the devotion of the city’s residents. Wander through the 3 hectares of the Acropolis thorough these main sites and the less-famous temples, taking time to read the well-signed descriptions of the historical and religious importance of the buildings.

10:30am – The Ancient Agora and back to Syntagma Square

If you’re the type of traveler who prefers to linger, then probably when you finish up at the Acropolis it’ll already be about time to head back to Syntagma and the airport. If you finish up a little early, though, head north from the hilltop towards the ancient Athenian Agora. The €4 entry fee allows you to wander through the ruined streets of the once-bustling city center of historic Athens, through the market lanes and central amphitheater where the citizens of Athens once met to decide the important political questions of their day. This alone is worth a half day to explore, especially for the keen photographer, but unfortunately this trip time is short and so you’ll have to walk quickly through as you return to the square. 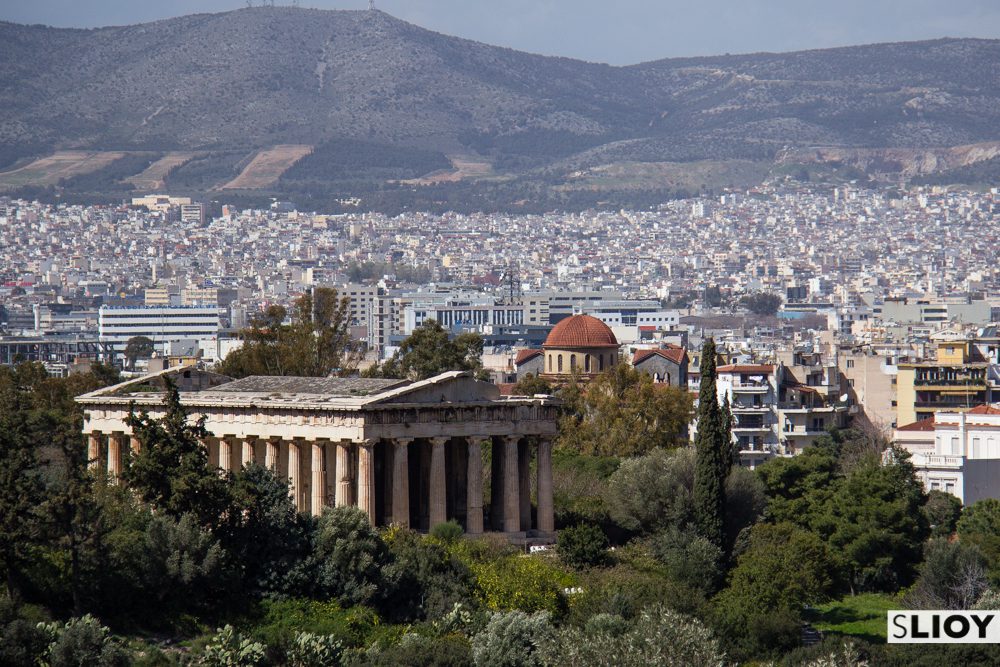 General advice is to get to the airport about an hour and a half before intra-European flights (give it an extra 20-30 minutes for flights to destinations outside of the Schengen zone, since you’ll have to clear passport control), and you’ll still need around 45 minutes to get to the airport assuming traffic isn’t busier than normal, so we’d suggest being on that 11:20am bus from Syntagma. Assuming you’ve already collected your boarding passes and don’t need to recheck any baggage, of course, you might be able to push it as much as an extra half an hour to the 11:50am bus – but of course, public transport in Greece isn’t always right on time so decide if the extra bit of time in town is worth it to you!

We hope that helps, Stephen. If you’ll be visiting Athens for a longer trip anytime soon, be sure to out What It’s Like In: Athens, Greece for a few more city tips and a look at some of our favorite experiences in the Greek capital (including one of our favorite traditional tavernas to grab dinner and start a night out). Happy travels.