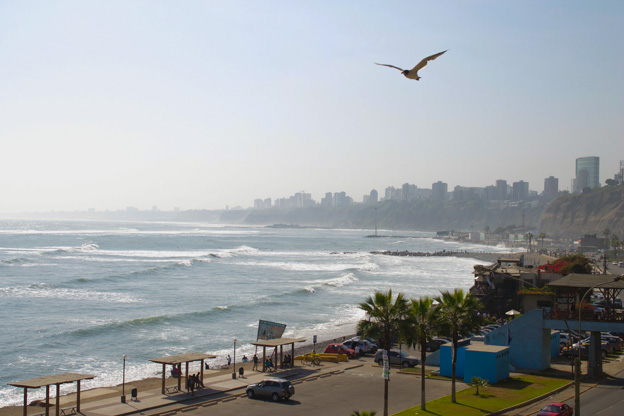 For a city that functions only as an afterthought on expensive group tours to Machu Picchu, I’ve been able to have an incredible amount of fun in the Peruvian capital.

It’s funny how before I moved to Peru, I couldn’t wait to visit Cusco and Machu Picchu. Lima was just an afterthought. It was that place where my apartment and office were located, but not much else. But after nearly two years living in Lima, Machu Picchu is now the afterthought. Many of my favorite experiences in Peru have taken place in Lima, and I ended up extending my stay here well beyond the planned six months.

Here are the gems I’ve been able to unearth.

Stand at the edge of the 200-foot cliff at the edge of the city and hold your parachute up to catch the wind. Feel your feet leave the ground and start to drift out over the ocean. Then turn around and float above the skyscrapers, hundreds of feet in the air. While the breeze whips across your face and you’re finally free of heavy humid city air, look down and see the city below at your feet. Yes, it was one of the greatest experiences of my life, and yes, I almost had a panic attack.

Peru was just named the world’s top culinary destination at the World Travel Awards for the second year in a row. In Lima, celebrity chefs command the same levels of attention as politicians and Peruvian dishes like ceviche and pachamanca are appearing on the menus of Michelin-starred restaurants in places like New York and London. From the posh, seaside bistro to the humble food stall in the market, you can almost always count on finding delicious food in Lima, even if you’re on a young writer’s budget like I am.

Sure, Machu Picchu gets all of the attention, and of course it’s magnificent. Why else would so many people list it as their trip of a lifetime? But besides the Incas, there were plenty of other civilizations, the remains of which can still be seen in Lima. In Miraflores, you can visit Huaca Pucllana, a pyramid belonging to the Huari culture that predated the Incan empire by over a thousand years. Also to the south, you can visit Pachacamac, a massive temple complex built in 800 BCE. What’s interesting about both of these sites is how the city nearly envelopes them, with the rough hewn bricks of the pyramid walls blending into the modern skyline.

If you’re not keen on urban adventures, Lima is a great place to launch other expeditions, such as to the rock formations of Marcahuasi, sandboarding at Huacachina, or taking a boat trip to see penguins at Paracas. All of these outings can be completed in a weekend and solely using public transport.

Try to Crack the Combi Code

Want an adventure? Try using Lima’s chaotic public transport system. Known as “combis,” these little vans zip around the city, often at break-neck speeds and stuffed to the gills with commuters. You can tell where they go based on the street names painted on the sides, but good luck finding any more information besides that. Fares are usually one sol, or 50 cents for short journeys.

One Third of the Country Lives Here

Those packaged tours rarely let you see anything beyond archaeological sites and a few “authentic” village market experiences. Cusco can be quaint, but Lima keeps it real. You see things like income disparity, resource scarcity, traffic, pollution, and the other real problems the country grapples with. If you want a more complete picture of the country you’re visiting, make an effort to visit other places besides the tour itinerary.

Beach season is just beginning in Lima. There are some incredible beaches, mostly in the south, where you can surf, sunbathe and bar-hop to your heart’s content.

Every year in September, Lima hosts the culinary festival of Mistura, where the best restaurants and chefs set up market stalls and serve their signature recipes. In January, Lima also hosts the Dakar Rally, which is an off-road race across South America from Argentina and Chile to the Peruvian coast. In 2019, Lima will also host the Panamerican Games. These are just a few of the many events happening all over the city.

In terms of my own personal growth, Lima has been kind to me. It’s the place where I published my first piece of writing and where I got my first reporting assignment. I’ve also been inspired to learn more about photography and after only a year of practicing with my camera, I look back at my work and see remarkable improvement. It’s been nearly two years since I first moved here and I don’t see myself leaving anytime soon.

And if you visit, maybe the city will grab you too, and refuse to let you go.

All photographs by the author.

Sophia Guida has been living in Lima, Peru off and on since the beginning of 2012, where she works as a freelance writer/photojournalist and takes every opportunity to explore the areas left out of the guidebooks. You can find her on Twitter, Instagram, and also on her photo blog, photosfromperu.tumblr.com.