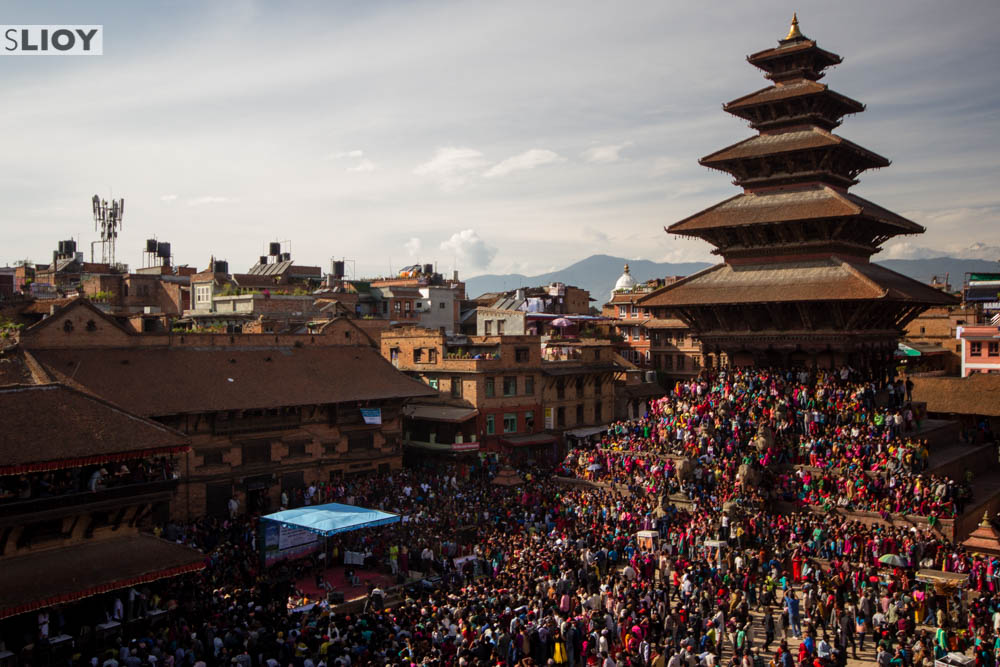 Most of the year a quiet and car-free escape into a historical center of power of the Kathmandu Valley, for over a week surrounding the Nepalese New Year the town of Bhaktapur becomes a pulsing center of music and dancing and chariot pulling and religious fervor.

On the last day of the Nepali calendar, which in 2015 fell on April 13th, locals in the south of  Bhakatpur raise an 80-foot wooden pole hung with two ribbons symbolizing the deadly snakes of an ancient fable.

A king of long-ago Bhaktapur strove to find a husband for his daughter, but the morning after each wedding the groom was found dead. As the number of potential suitors dwindled, a brave newlywed husband forced himself to stay awake all night after the consummation of the marriage. As two snakes emerged from the nostrils of the sleeping princess, the young man killed the serpents and ended the curse – and in doing so earned the happiness of the people of Bhaktapur and started a celebratory festival that would continue to the modern day in the form of the Bi (literally ‘snake’) Ska (lit. ‘death’) Jatra (‘festival’) in this otherwise peaceful town. 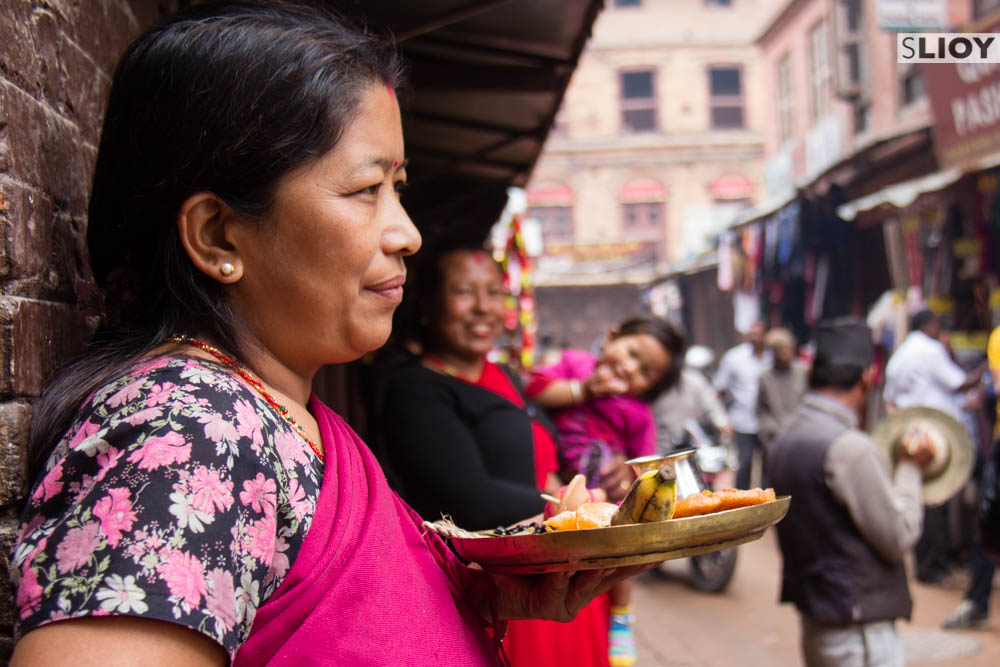 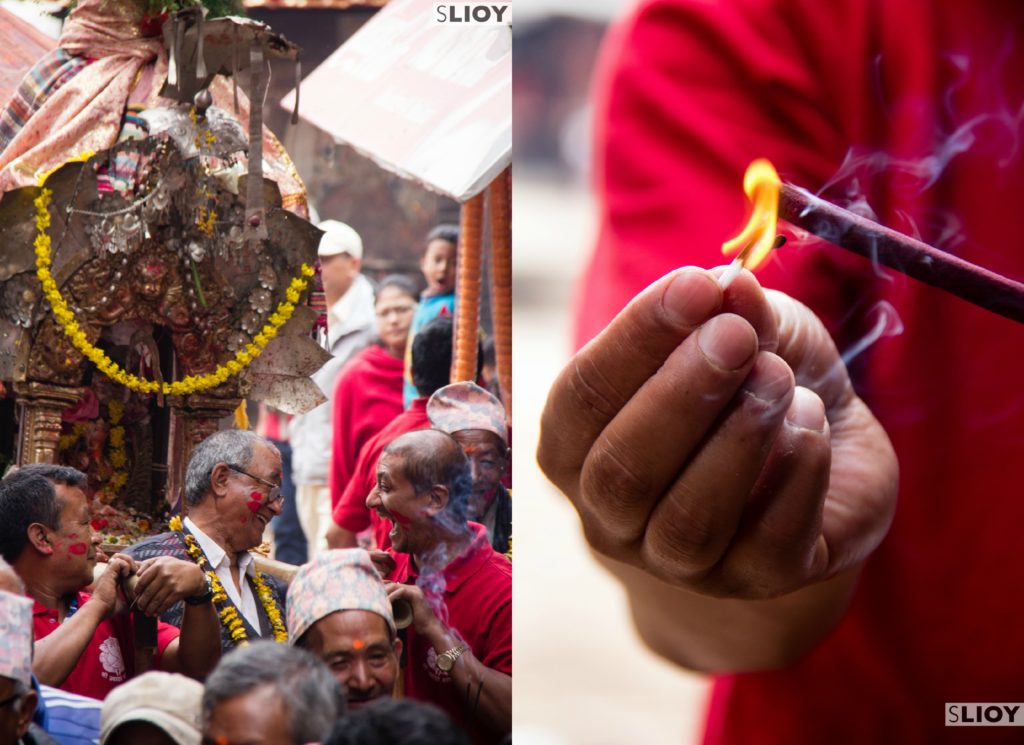 Bisket Jatra today is equal parts street party and religious procession. During the daytime, local groups beat drums and sing as they lead the way around town followed by the portable icons of a number of Hindu gods. Most notable are the shrines to Bhairad and Bhadrakali, mounted on wooden chariots and tugged through the cobblestone streets of the city by the sheer physical force of teams of local men. At predetermined times and to great fanfare, the processions of Bhadrakali and Bhairab (the main protective deities of the Kathmandu Valley) meet as during their consorting of ancient times. Though less important locally, devoted Shiivites gather to witness a similar meeting of the shrines of Mahalaxmi and Mahakali; both aspects of Durga who they celebrate as the wife of Shiva. 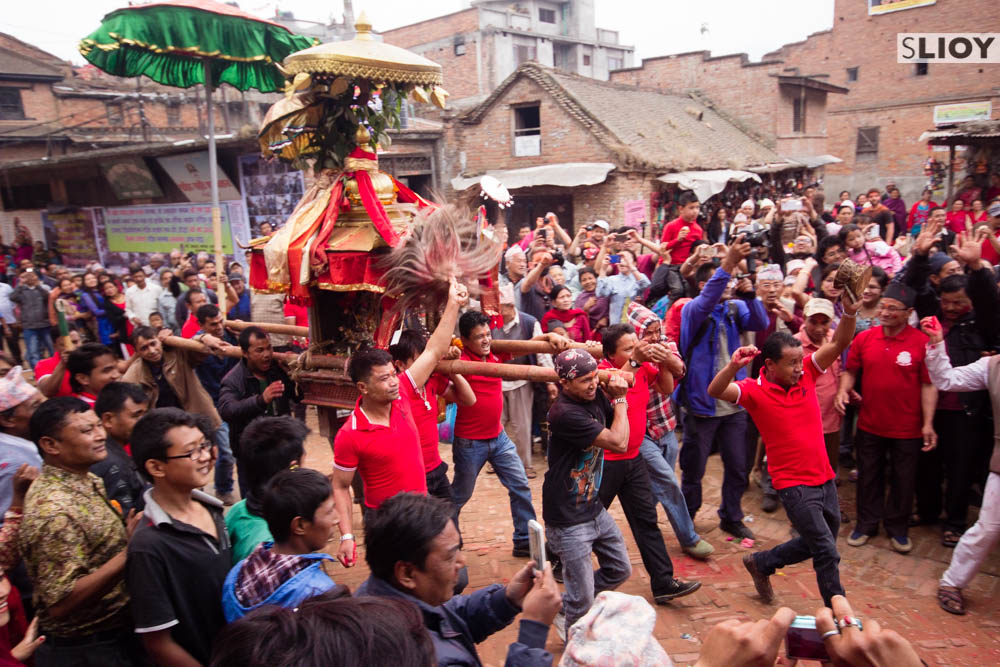 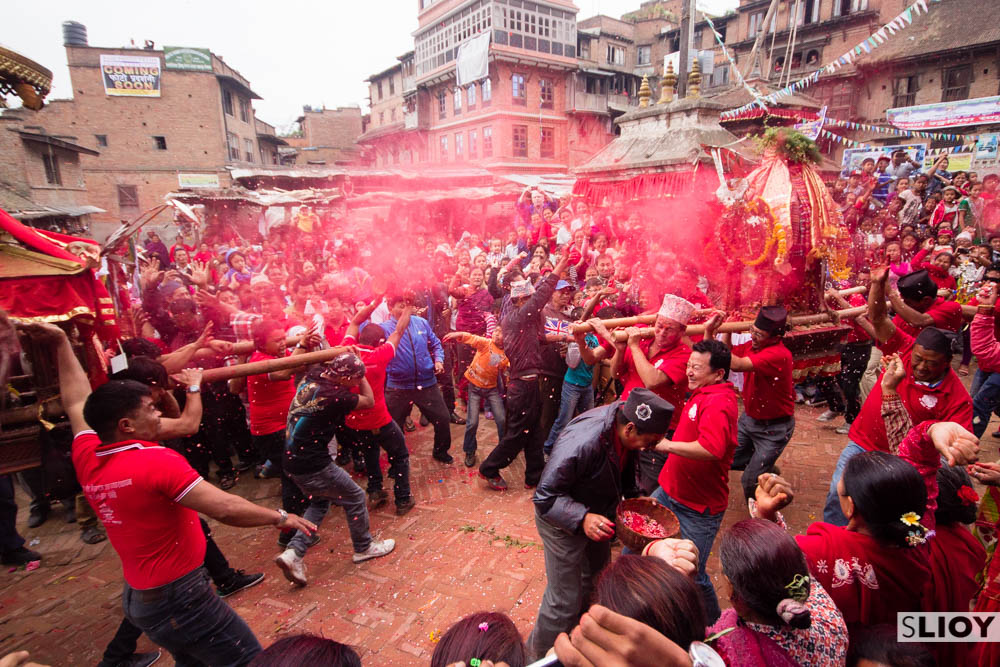 Celebrations in the village of Bode several kilometers outside of Bhaktapur take an even more visceral bent – after a morning of processions and shrines and a frenzy of vermillion powder that covers streets and people alike, one male volunteer from the village (and a circle of orange bodyguards) visits each shrine in the city center to make a small offering before ascending a stage prepared beside the Pancho Ganesh temple on the edge of the village. 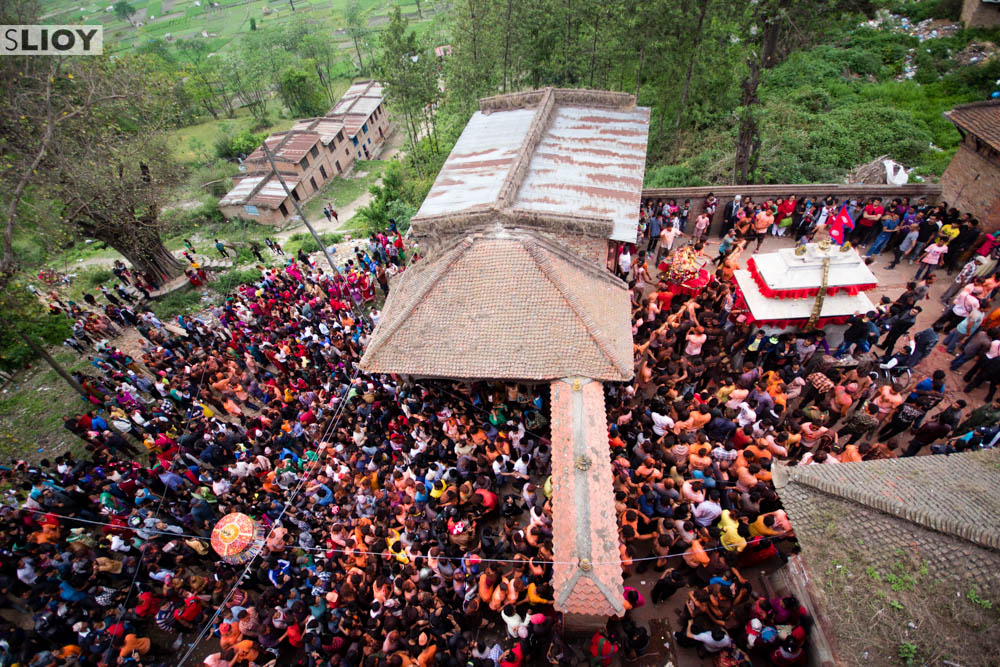 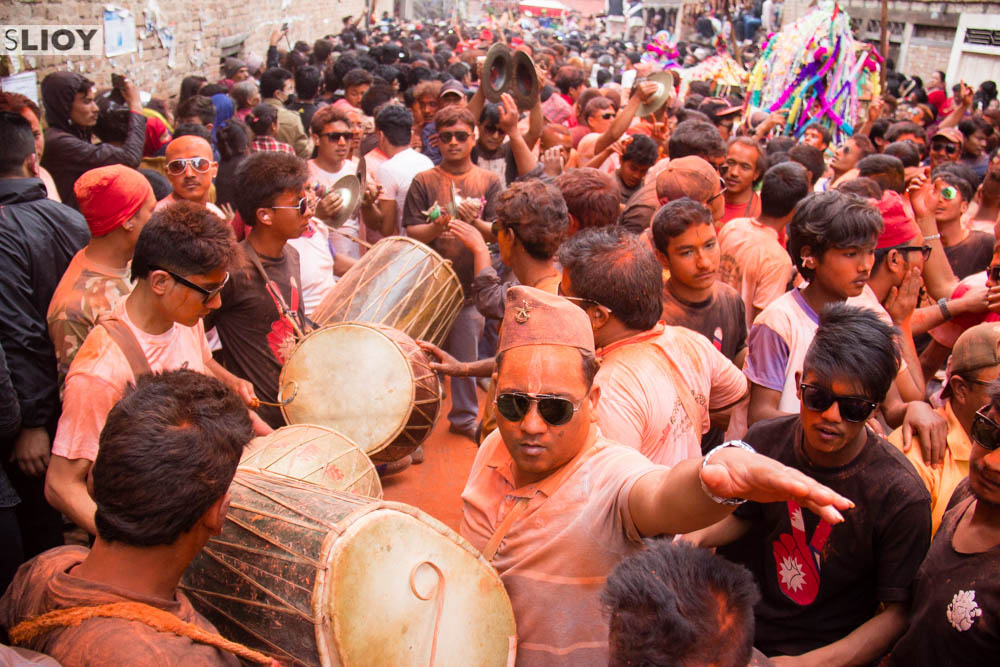 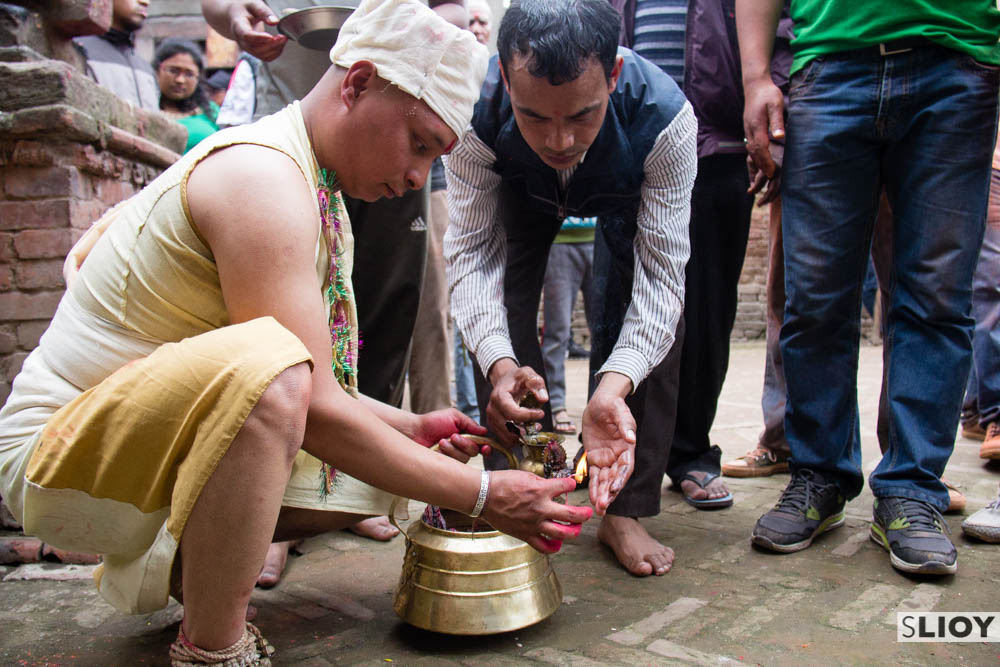 Though the person sometimes changes (the current volunteer, Juju Bhai Basha, has reportedly volunteered for seven consecutive years), the process has been the same for over a century. After making his devotions, the volunteer takes a seat on stage as village elders pierce his tongue with a foot-long steel needle before setting him off through the crowds carrying a burning bamboo rack. The rite is believed to bring good fortune in the New Year to both the volunteer himself and all the residents of Bode. 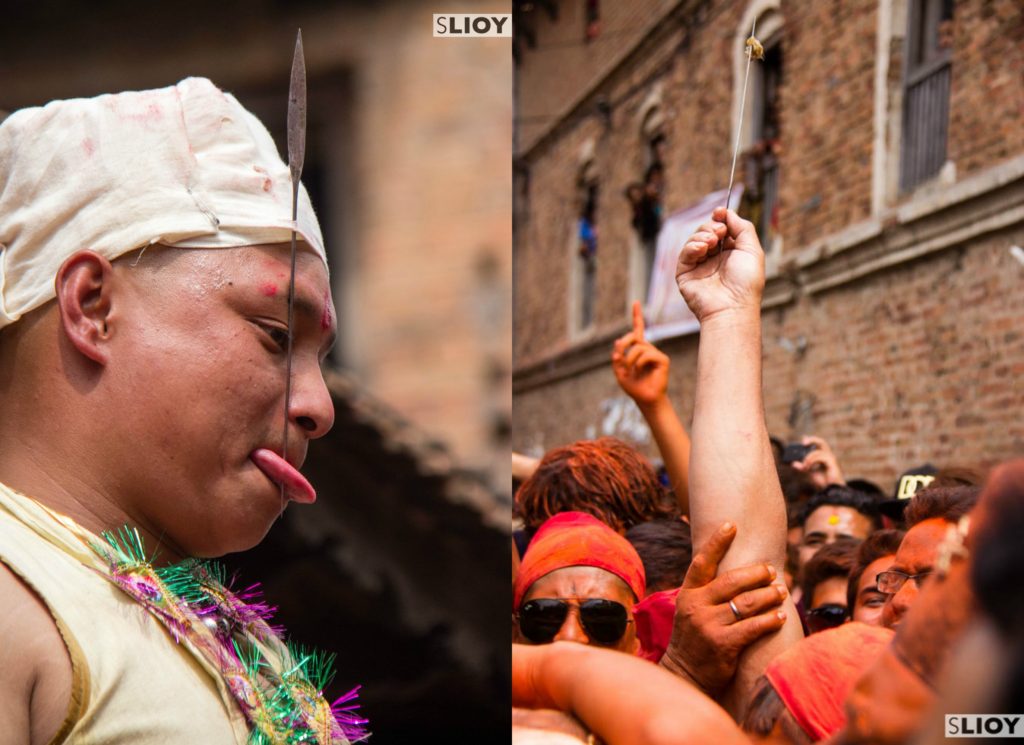 In Bode as in the rest of the area surrounding Bhaktapur, Bisket Jatra will continue through the 5th day of the Nepal New Year. The streets will stay full of music and dancing but, one assumes at least for Juju Bhai, a little less singing. Happy Bisket Jatra! 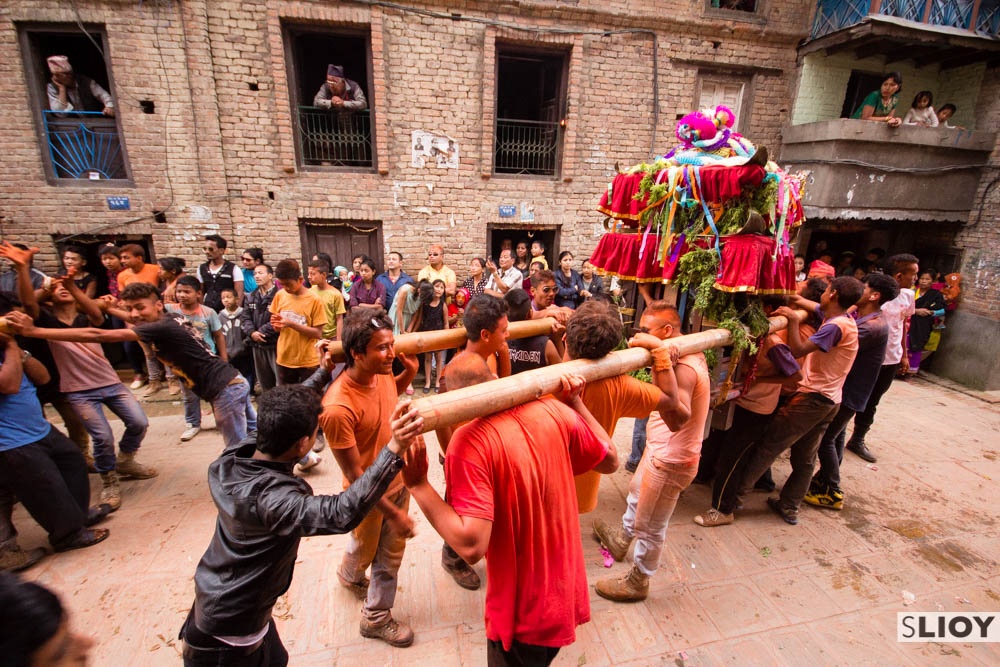 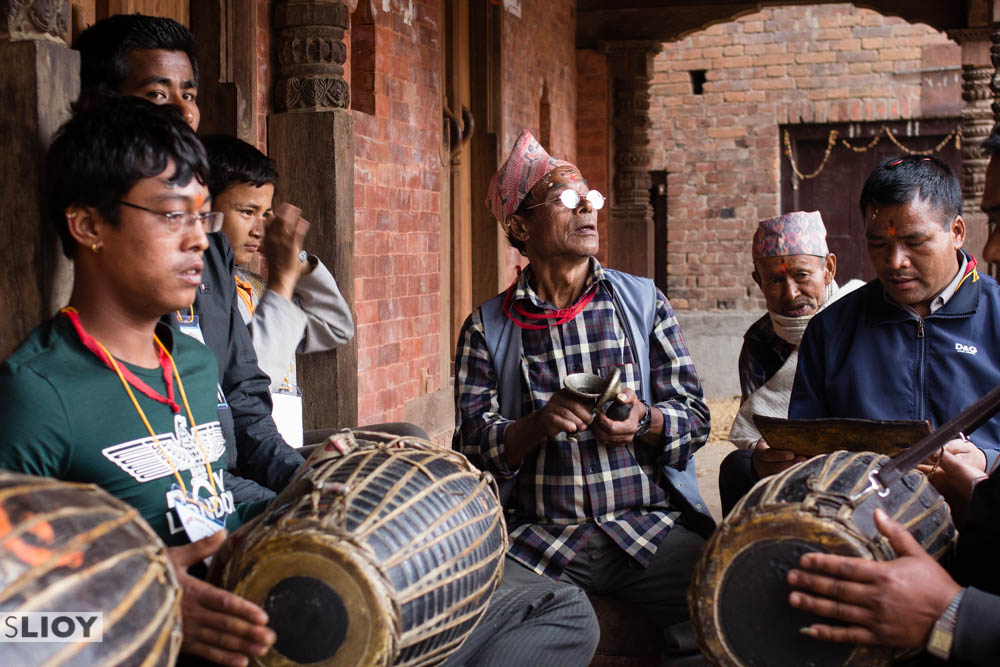 What do you think of Bisket Jatra? What’s the craziest festival you’ve ever seen? Leave a comment letting us know!