The Outback is a place that will stay in your mind for a long time. The open road and vast landscape will draw you out here and the distinct personalities of the people you’ll encounter will bring you back. Here are 19 of our favorite photos from Outback Queensland:

1) Outside the town of Quilpie you’ll find Baldy Top, which is just high enough to give you this outstanding view over the Outback.

2) Eromanga, Queensland is known for three things: being Australia’s furthest town from the ocean, its inland oil refinery, and the recent discovery of dinosaurs. Before the new dinosaur museum gets built, the next best thing is a stop at the Eromanga Living History Centre.

3) There’s nothing quite like your first Outback sunset. This one is from the edge of Windorah, in Channel Country. This region is said to be some of the best cattle fattening pasture in the world.

4) Take a lunch break with a view! Stop at Deon’s Lookout, not far from Betoota, for sweeping views of Channel Country.

5) Outback Queensland is essential to the national identity of Australia.

6) Welcome to Betoota. Pop 0. Once a busy meeting point for pastoralists and drovers moving their cattle to the markets of South Australia, Betoota is now a ghost town situated 170 km (110 mi) east of Birdsville and 227 km (141 mi) west of Windorah. The outpost bounces back to life for the Betoota Races each year on the last Saturday in August. The once operational Betoota Hotel, built in the 1880s, was a favorite resting and refueling stop for tourists until it closed in 1997.

7) You’ll never forget a sunset from ‘Big Red’, one of the tallest sand hills in the Simpson Desert. Big Red is located about 25 km west of Birdsville.

8) In the immense Australian Outback, windmills are still essential to supplying water to properties and thirsty livestock.

9) Opal is the only gemstone with the ability to split white light into its component colors. Light enters opal and is split on the different voids that have formed between the spheres. Australia produces over 96% of the world’s opal supply. In the early 1840s German geologist Johann Menge discovered opal on Tarrawilla station in South Australia. Since that time opal fields have been uncovered in other areas of Australia, the richest at Coober Pedy. 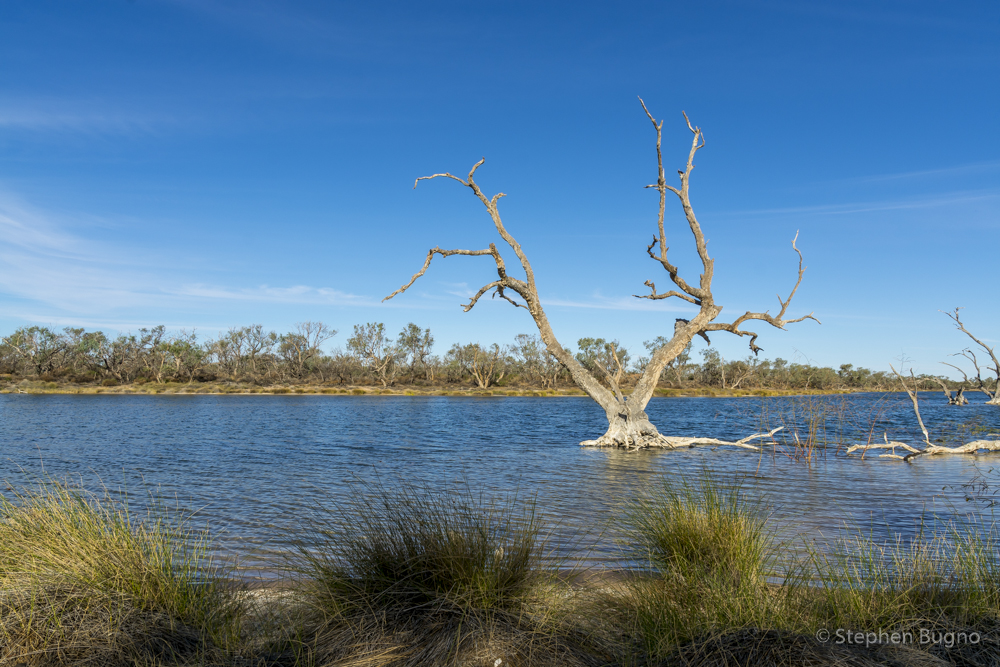 10) Great Artesian Basin — The first Europeans over the Great Dividing Range found huge rolling plains perfect for grazing their sheep and cattle. But the search for an adequate water supply became a huge challenge. Little did they know that vast reserves of water lay below the surface in the Great Artesian Basin. Below 20% of the Australian Continent is the world’s largest store of underground water. Europeans first discovered artesian water in 1878 near Bourke in New South Wales.

11) There are thought to be more than 20 million kangaroos in Central Queensland. There has even been call to cull the population because of their tendency to destroy crops and eat the grasses that livestock feed on. But some are naturally dying from the recent drought.

12) Birdsville is home to the famous Birdsville Races, in which up to 8,000 revelers come from all over Australia. But this isolated town of 115 residents in western Queensland is more than just a one-hit-wonder.

13) Camels first arrived in Australia in 1840, but were not widely used until the 1860s for both exploration and as a means of transport in the Outback. By the 1920s large teams hitched to wagons allowed even greater loads to be carried. At that time there were more than 12,000 camels in Australia, but then the numbers began to decline.

14) The Outback is so big that a rancher may not see one of his or her cattle for two years!

15) Winton is a self-made town that is hard not to love. This remote and isolated small town of less than a thousand residents has a lot going for it. It’s the dinosaur capital of Australia, the birthplace Waltzing Matilda, and has a handsome main street with historic buildings.

16) “Once the gateway to the inland had been opened, the colonists faced unimaginable challenges–isolation, searing heat, flood, drought, bushfire, dust storms, crop failure, and loss of livestock. Yet the greatest was conquering the tyranny of distance”

17) Qantas is the world’s second oldest airline, dating from 1920. Qantas stands for Queensland and Northern Territory Aerial Service. It was founded in Longreach, QLD

18) Australian shearers are among the best in the world. Highly skilled, tough and hard-working, the shearer is the backbone of the Australian wool industry and embodies much of what has become known as the Australian ‘hero’ –laconic, independent, resentful of overbearing authority and always ready to stand by his mates.

19) Without light pollution, you’ll see the night sky like you’ve never seen it before.

Be inspired by Outback Queensland, where the land and the people tell Australia’s story.