The following guest post is from Alexander Barrett, who recently published This is Shanghai

, a guide to living in the world’s most populous city. Alexander is a writer and illustrator who is constantly baffled by the human experience. From his home in Shanghai, China, he uses ink and words to try to make sense of it all. He is rarely successful, but his work has appeared all over the internet, the streets, and the TVs of North America and Asia.

I was only supposed to be in Shanghai for two months. My sister moved to China and I figured I could visit her for free if I found a short freelance job in the city. So I did.

A year and a half later, I left that short freelance job. In that time, Shanghai completely opened my mind, it taught me a lot about the human experience, and it gave me a whole lot of great material. So much material I figured I should write a book about it. So I did.

I like to say that Shanghai is endlessly interesting, but never comfortable. You are constantly surrounded by people, and noise and taxis trying to run you over every time you step off of the sidewalk. I feel confident that a year and a half was plenty of Shanghai time. But now that I’m back in the regular ol’ USA, I miss it in ways I never would have expected.

Here are the the five things I miss most about the world’s most populous city:

Usually, Yan’an Elevated Road is just your average elevated road. But at night, somebody somewhere flips a switch and turn Yan’an into highways of pure energy, effortlessly conveying its passengers to nearby spaceports. 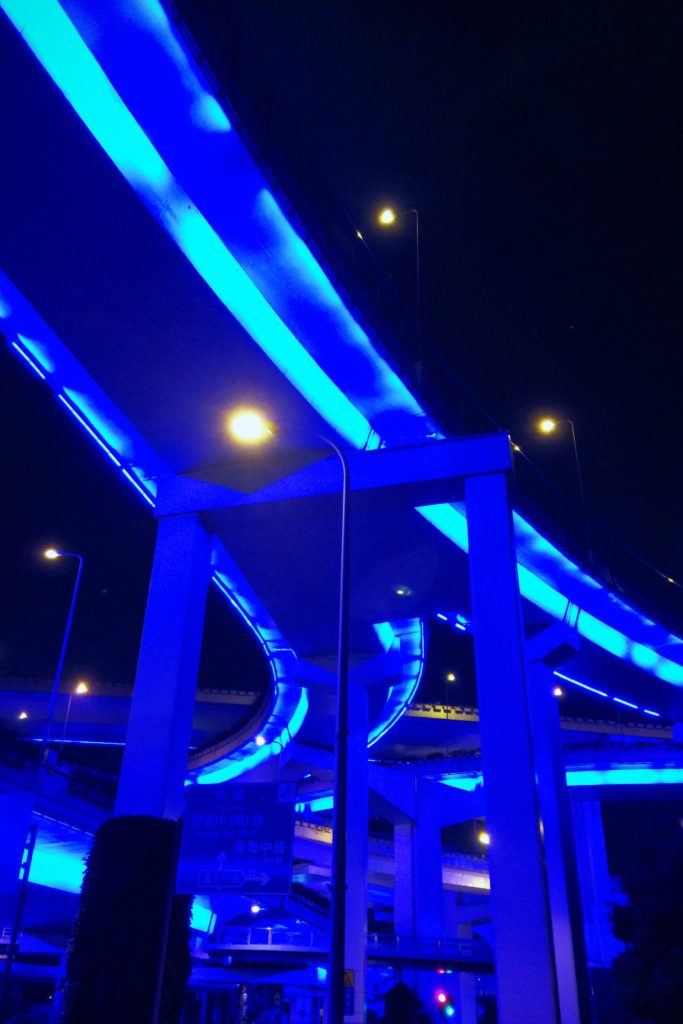 This effect is actually thanks to well placed strings of blue lights underneath the road. When they light up, they simply reflect off of Yan’an’s glossy white finish. The best part is that city only uses the lights on weekends and special occasions. Feel like transporting yourself to a future world on a Tuesday? Well, you’re outta luck.

The West Bund features a park with a long walking path next to the Huangpu River. Part of that path leads you over a covered pedestrian bridge that immediately takes you over part of the river and into Stanley Kubrick’s 2001: A Space Odyssey. 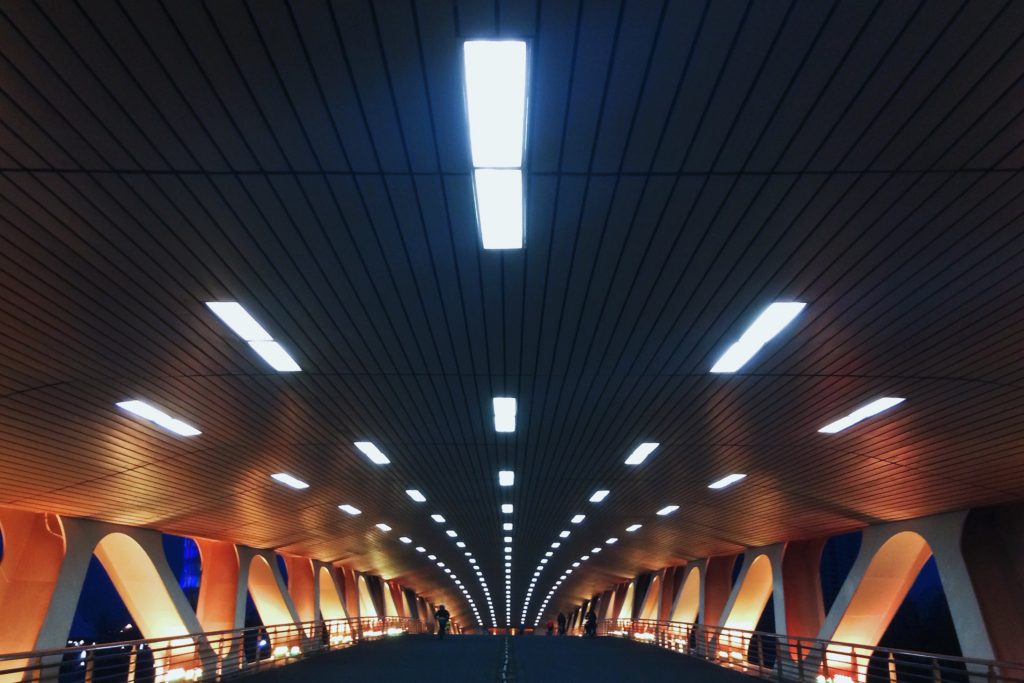 And if that weren’t enough, the color of the lights overhead are constantly changing, making you feel like you’re at a rave on a spaceship. 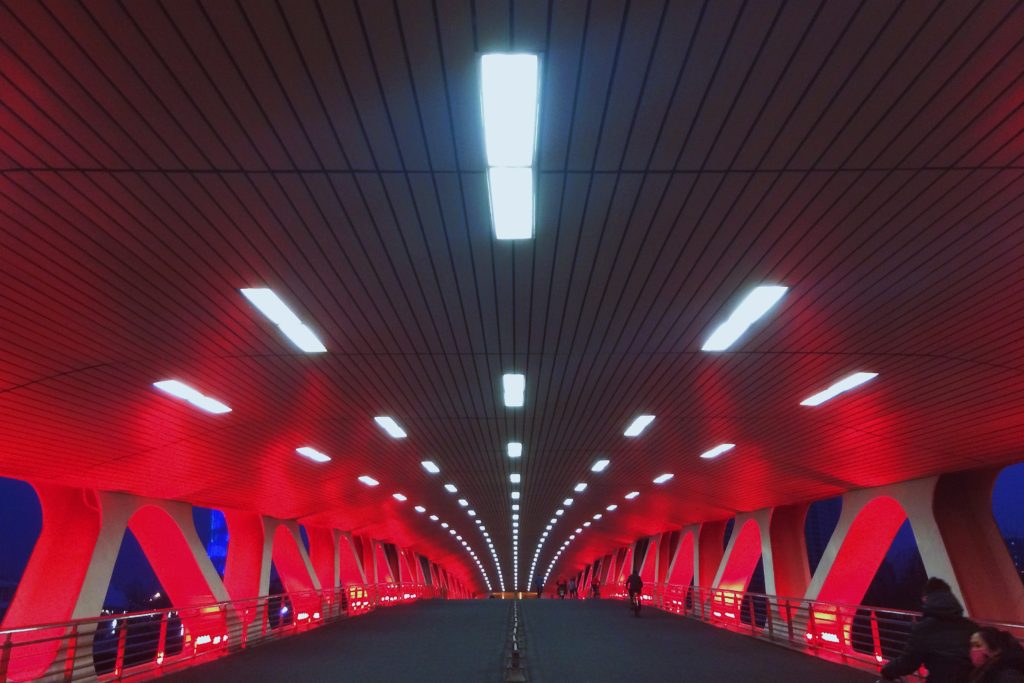 When is your favorite time to see fireworks? If you answered “Constantly,” Shanghai is the city for you. Weddings, birthdays, New Year, New businesses, anytime of the day or night something is desperately in need of some celebration. You weren’t planning on sleeping at 3 am, were you? 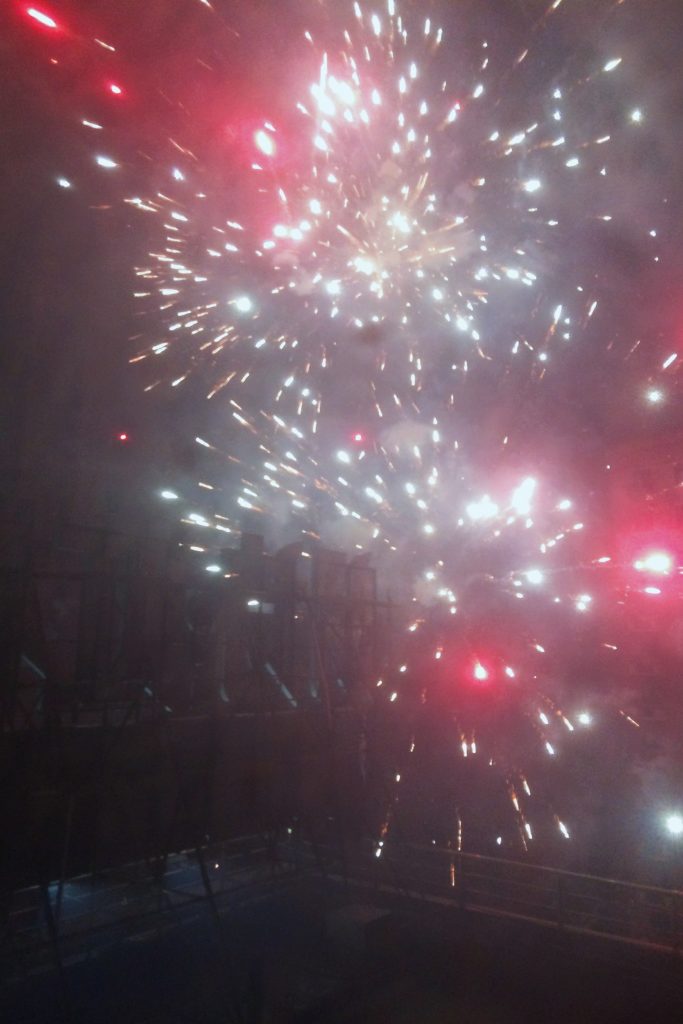 Sometimes the fireworks are just designed to be loud. But when they put on a show, you get a front row seat. Because it seems that nobody is concerned with your safety or even their own. I have spent many nights inside fireworks. Here’s a video I made about it:

I don’t have any pictures of the food at Di Shui Dong because the moment it arrived at the table I was completely captivated. This Hunan style restaurant has two locations in Puxi on the west side of the city. Their ribs will make you lose consciousness. But my favorite dish is the spicy shrimp. It comes in a giant pile of garlic and peppers. You have to dig them out. The spice creates a buzz that you’ll feel all over your body for the rest of the night. I suggest pairing these shrimp with a big bottle of Tsing Tao. It’s transcendental.

One day, a friend and I took the Metro to the end of the line and started walking nowhere in particular. After a while, we found ourselves on a sidewalk next to a long wall of billboards. In the middle of the wall was a very small door. We looked around, made sure no one could see us, then we went through the door. And this is what we found there: 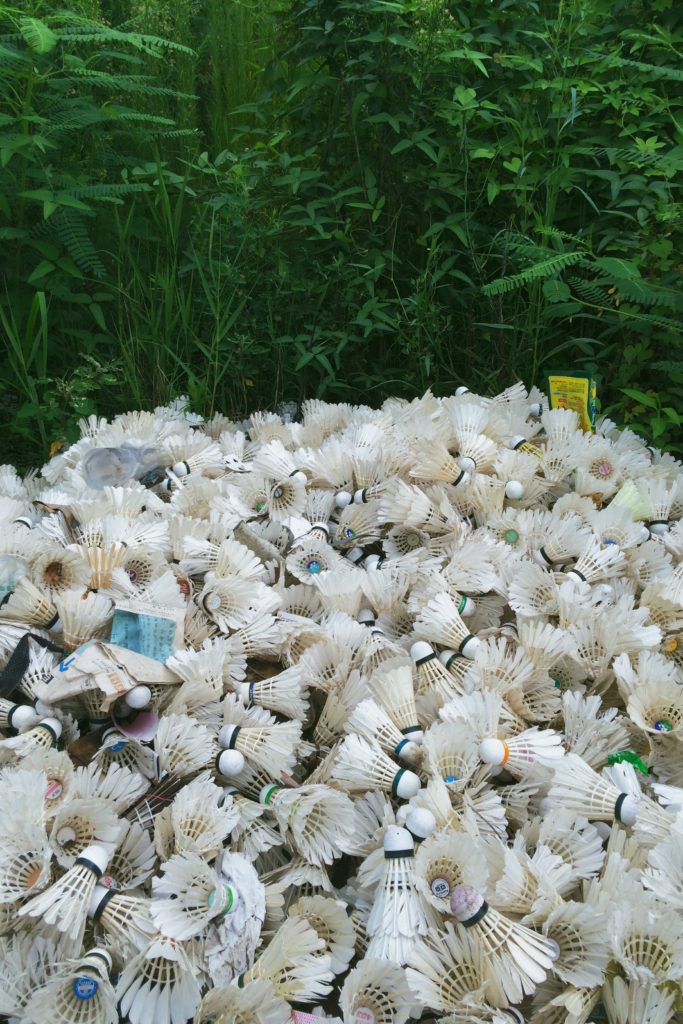 What? Why is this specific thing in this very unspecific place? Who put this here? Is this a statement on the meaninglessness of existence? WHAT? WHY?

Shanghai is full of these little installations that would be great works of Art if placed in a gallery setting. It’s these birdies, it’s the terrible English on everyone’s t-shirt, it’s these melons that are in your way for some reason: 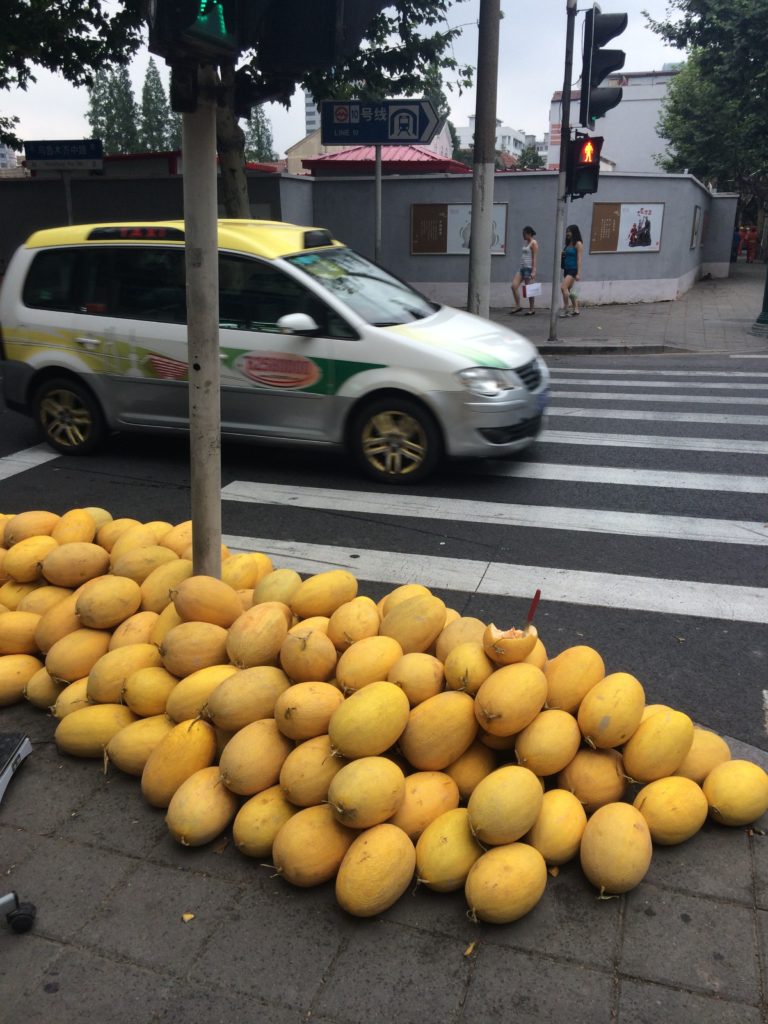 It really makes you think.

This is self explanatory. 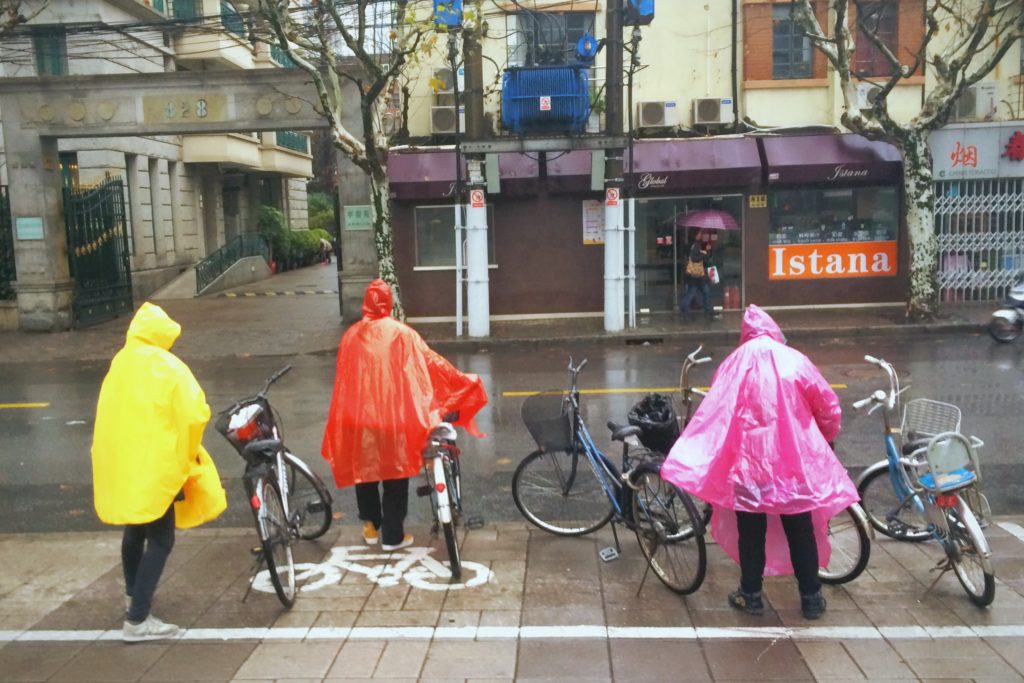 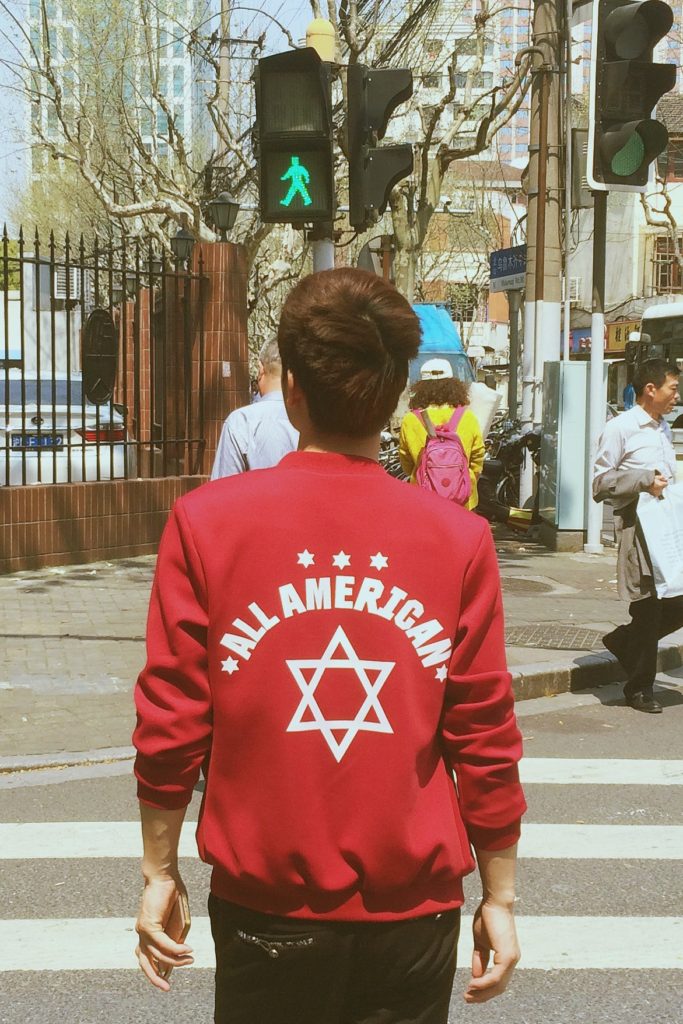 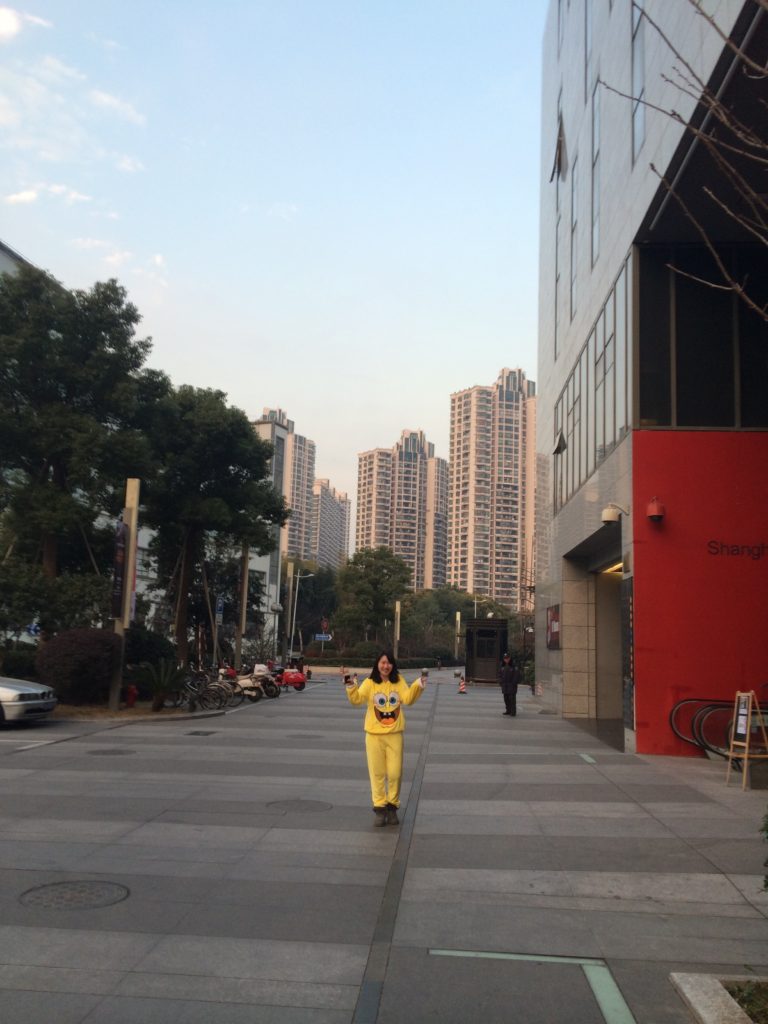