Skip to content
Laura Bronner is a native New Yorker turned serial expat. In the past five years she’s lived in New Zealand, Australia, and most recently, taught English in Korea. Catch up with her adventures and where’s she’s moving next at Collecting Labels. Follow her on Facebook and Twitter.

Korean food is starting to make headlines. It’s a cuisine packed with flavor, often spicy, always salty, sweet and sour. It is one that many people know little about other than barbeque and kimchi, but if you like food, you’ll love it done the Korean way. 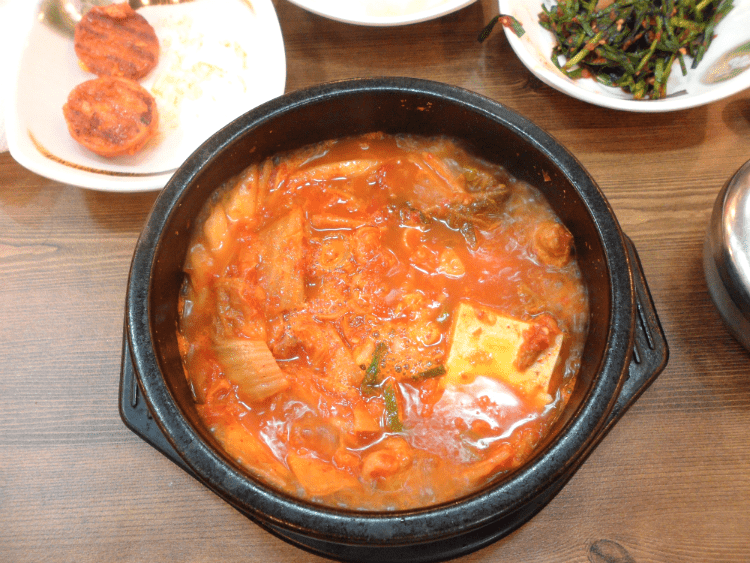 I’m sure you’ve already heard of this country’s main food group: Kimchi. Well this is kimchi done in the most insanely delicious way. It’s usually made with kimchi that has been left to age for over a year so it’s incredibly strong in fermented flavor. Slow cooked in homemade fish stock, chock full of red pepper paste, chunks of pork, and served in a piping hot ceramic dish. 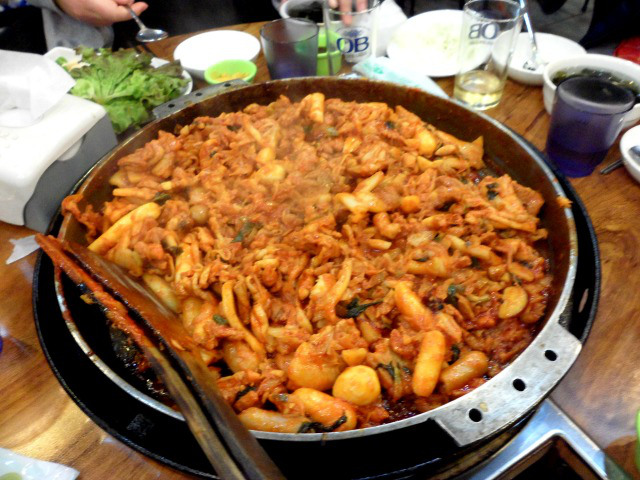 Steaming hot chicken pieces, cabbage, Korean rice cakes, quail eggs, potato all cooked at your table with heaping spoonfuls of red pepper paste called gochujang. Just before you’ve eaten the entire plate, order some mixed rice. Your server will come to the table with more gochujang and rice and in a few minutes, you’ll have a plate of the best fried rice of your life. 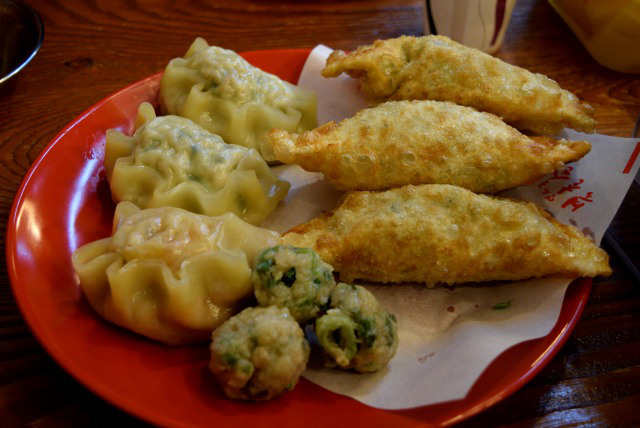 Korean dumplings can be ordered steamed or fried. They are often filled with super-spicy kimchi, but there are pork and vegetarian varieties as well. Regardless of the filling, it will be spicy. 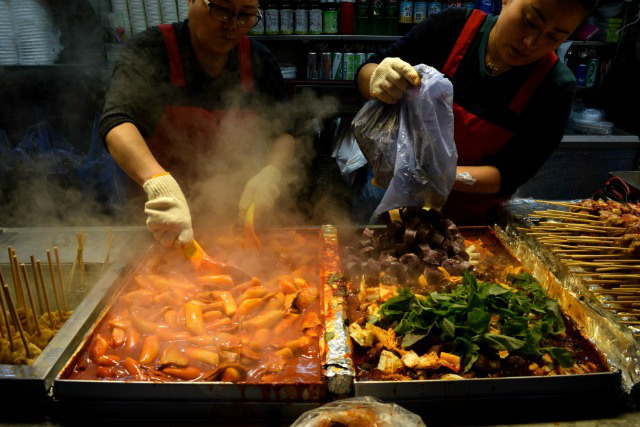 The ultimate Korean street food, tteokbokki is made up of Korean rice cakes, sometimes filled with cheese or sweet potato, and fish cakes cooked in a broth made with anchovy stock and gochujang. It’s incredibly spicy, but so warming and a texture unlike anything else. 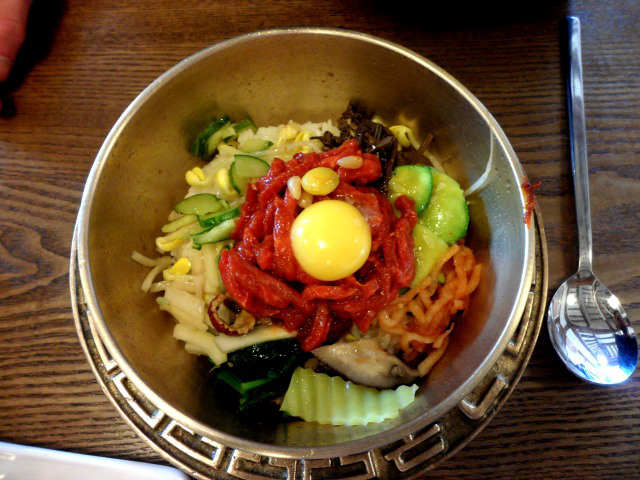 Translated as “mixed rice”, bibimbap is an easy, cheap meal packed with flavor. Order it in a dolsot or ceramic pot, and it will arrive at the table piping hot. A usual bibimbap comes with rice, kimchi, bean sprouts, cucumbers, and mushrooms. You can have it topped with cooked or raw meat and it’s usually finished off with an egg on top – sometimes fried, sometimes cracked raw right over the top.

A little bit controversial, sannakji is raw baby octopus (nakji means small octopus) that is cut into pieces while it’s still alive. It’s brought over to you on a plate still wriggling. The pieces of octopus are tender and sweet and are usually served with a sesame oil and soy sauce dip. Don’t be too freaked out when it starts suctioning to your tongue and lips (if it hasn’t already suctioned itself to the chopsticks). It’s definitely an eating experience.

Soondae is a type of Korean sausage similar to blood sausage, but completely different to black pudding. Inside the pig intestines are cellophane noodles, ginger, garlic, sesame seeds and pig’s blood. Once it’s steamed it is eaten with a dipping sauce or in a variety of soups.

Cold noodles don’t initially sound appetizing, but naengmyeon is a summer favorite in Korea. Originally from North Korea, it’s a little something that the south has learned to love. Buckwheat noodles in a chilled broth served with mustard and vinegar on the side. Have the bibim-naengmyeon, a ladle of gochujang and bit of beef stock, to warm things up. 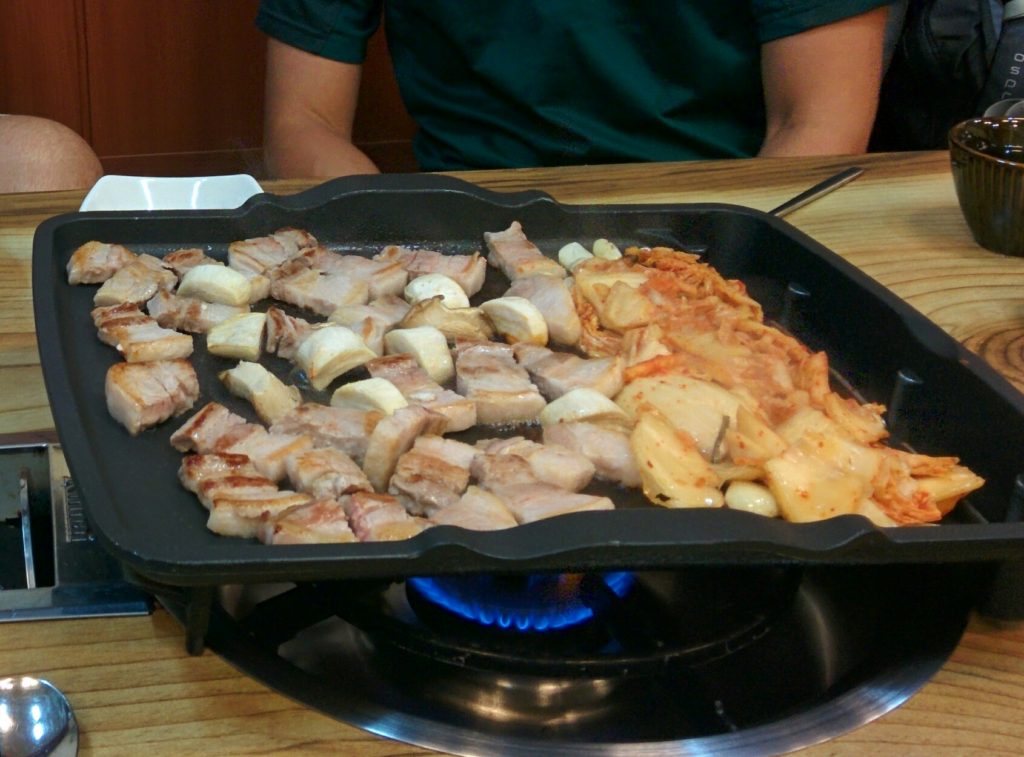 A Korean barbecue favorite, samgyeopsal is thickly sliced, deliciously fatty pieces of pork belly. Usually barbecued right at the table and served with plenty of sides. Barbecue in Korea is communal and a great time to get together with friends. Order a few servings, cut it into bite sized pieces as it cooks, dip it in samjang, a sauce made with red pepper paste and fermented bean paste, wrap it in a lettuce leaf and enjoy.

A specialty of Gwangju (they have a whole street dedicated to it), this duck soup can now be found in most cities in Korea. A thick, creamy stew of slow cooked duck brought out in a pot to continue to cook over a flame at the table. Served with rice and a basket full of parsley.

Laura Bronner is a perpetual country hopper. She's the girl whose feet are always itching for the next adventure, but wondering if I'll ever find a place that feels like home. In the last seven years she's lived in Switzerland, New Zealand, Australia, South Korea, and England. She blogs at Eternal-Expat.com. Connect with her on Facebook, Twitter, and Instagram.