The largest city in northern England, Manchester was once Britain’s industrial heart, produced some of the country’s finest music and is home to one of the world’s most famous football clubs. Architecturally, the city is dotted with spectacular Victorian Gothic and Edwardian buildings, emblems of its past as a giant of British industry. Modern Manchester is a cosmopolitan blend of cultures, meaning an eclectic mix of restaurants offering everything from Spanish tapas to Nepalese cuisine. The city also has two Premier League football clubs, United and City, ensuring a charged atmosphere of heated rivalry.

Whether you’re a football fan, music lover, culture vulture or foodie, Manchester has it covered.

What to see in Manchester

Spectacular Victorian Gothic and Edwardian architecture is in abundance in Manchester. Strolling round the city centre, take in Albert Square, bordered by the beautiful town hall, the Central Library, and the Midland Hotel. From here it’s a short walk down Deansgate to the John Rylands Library.

Another library, Chetham’s, is the oldest surviving public library in Britain, founded in 1653 and home to a vast a collection of centuries-old books. The ornate reading room hosted a young Karl Marx and Friedrich Engels, who sat reading together during the summer of 1845; it is possible to sit in the alcove where they sat, and the books they read are still on the shelves.

Manchester’s oldest Catholic church, dating from 1794, St. Mary’s, The Hidden Gem is tucked away down a side street close to Albert Square. While much of the outside is built from plain red brick, finely carved statues top the doorway. Inside, the High Altar is made of marble decorated with life-size statues of a number of saints. The beauty of the altar, and its hideaway location make this church worth a visit.

Built after the arrival of Franciscan friars in Manchester in the nineteenth century, Gorton Monastery is a stunning Victorian Gothic building standing amidst a residential area. The monastery has recently undergone a restoration program and welcomes visitors most Sundays between Noon and 4pm.

Artifacts and memorabilia from every era of the beautiful game are housed in the museum, including shirts and medals donated from legendary players. Exhibits explore great teams of the past and football culture; there are also interactive sections. The museum is located in the city centre and admission is free.

The city has a longstanding association with the working class labor movement. The People’s History Museum documents Britain’s political and social history from the nineteenth century to the present day. Admission is free but donations are welcome.

Museum of Science and Industry

Manchester was the heart of industrial Britain, a role celebrated at the Museum of Science and Industry. The museum has some great interactive sections, ideal for children. Admission is free.

One of five branches, the Imperial War Museum North houses exhibitions on modern war and its impact on people and society.

What to do in Manchester

Renowned for football, Manchester has two Premier League clubs, fierce rivals Manchester United and Manchester City. The Premier League draws fans from around the world and as one of the most famous clubs in the world, United play to sell out crowds so, if you’re hoping to watch a game live at Old Trafford, look for tickets early. The English football season runs from August to May.

Offering fresh air, greenery and British history, former aristocratic estates Dunham Massey and Tatton Park lie just south of the city. Both include centuries-old manor houses and sprawling gardens full of wild deer. The grounds are perfect for a stroll, be it in the summer sun, through autumn leaves or on a crisp winter’s day.

Where to Eat in Manchester

Manchester has a great multi-cultural food scene, with a cosmopolitan mix of fare. Many of the best places to eat are in the city centre but some suburbs, like Didsbury and Chorlton, have an eclectic mix of restaurants.

Australasia serves pan-Asian cuisine in an atmospheric space under the Spinningfields area. The menu includes tapas and main dishes and contains lots of seafood, including the divine black cod. Arrive early for pre-dinner drinks at the bar and try a cocktail with an Asian twist.

Amidst the recent surge in Brazilian churrasco joints, Fazenda is Manchester’s best. Waiters circulate, proffering skewers of a variety of meat, from fillet steak and black pudding to chicken hearts. Diners take a token, displaying the green side to invite the waiters over and the red to signal a break, and can eat as much as they like. Fazenda is located in Spinningfields, close to a host of bars.

There is a wide selection of Spanish tapas restaurants in Manchester but El Gato Negro is a wise choice. The ground floor hosts a bar and charcuterie area, the main restaurant is in the middle with the third floor comprising a bar with retractable roof to enjoy drinks and snacks in the sunshine. El Gato Negro has a mouth watering menu and a great selection of beers, wines and cocktails.

Manchester is renowned for its curry houses and has no shortage of south Asian restaurants. The family-run Great Kathmandu has been open almost 30 years and serves a great combination of Indian and Nepalese dishes in a lively setting on West Didsbury’s popular Burton Road, close to a number of pubs for post-curry pints. Favorite dishes include Makhan Chara and Bhaktapur chicken.

Combining Spanish, British, Middle Eastern and other influences, Volta have put together a delicious menu of tapas dishes. Choose from Iberian meats and cheeses, lamb dishes and even noodles to create your own eclectic palette. A personal favorite is the lamb shwarma with harissa. Volta also serve great cocktails and an array of craft beers, making it easy to stay drinking long after the plates have been cleared.

The full English breakfast is one of the UK’s signature meals and there a plenty of options in the Didsbury area. Food at Albert’s is great at any time of day; alongside an exemplary full English, the breakfast menu includes everything from waffles to chorizo hash scrambler.

Tiny, bustling Bar San Juan serves incredible, authentic Spanish tapas on Chorlton’s fashionable Beech Road. This place is deservedly popular and always busy, but does not do reservations. Diners can drink at the bar or outside until a table is ready; to reduce your waiting time, visit during the week or head down early. The food and wine is definitely worth the wait.

If Indian food is your thing, head down Wilmslow Road, also known as The Curry Mile, in Rusholme for a strip lined with south Asian restaurants, from Indian and Pakistani to Bangladeshi and Nepali. If travelling on a budget, look out for those with a bring your own booze policy.

Where to Drink in Manchester

Pubs, bars and nightclubs are spread across the city centre. The Northern Quarter is a hive of independent and often alternative bars and has long since been a cool area to drink. Its compact size and abundance of watering holes make it perfect for bar hopping.

Spinningfields is the location for much of the city’s business, but the area also has a plethora of chic bars. Head to The Alchemist for a luminous, steaming concoction from the extensive and creative cocktail menu. If you’re after craft beer, drop into the Oast House to drink from a list of local and international brews to the backdrop of nightly live acoustic music.

For drinks with a view of the city, nowhere competes with Cloud 23 at the Manchester Hilton. Enjoy drinks at the floor-to-ceiling windows; book ahead if visiting at weekends.

Outside of the city centre, West Didsbury’s Burton Road has a great selection of pubs and bars to complement its eateries. The Metropolitan is a huge pub with a beer garden that comes to life when the sun’s out. Across the street is The Drawing Room, a tiny hole-in-the-wall with an extensive cocktail menu and happy hour offers. The George Charles is fairly new to the West Didsbury scene but is always busy thanks to its combination of well executed homely British food and well stocked bar of craft beers and good wine. The inside of this bar-cum-restaurant is a higgledy-piggledy combination of wooden chairs and tables, slightly chaotic but good fun with drinkers and diners mixed together.

Where to stay in Manchester

The Midland is a Manchester icon, housed in one of the most impressive and recognizable buildings in the city and centrally located close to Albert Square. The Midland has a host of attractions, including a spa and one of the city’s foremost restaurants, The French.

A boutique hotel combined with a pub and restaurant, Abel Heywood is ideally located in the Northern Quarter, a short stumble home from dozens of bars. Rooms are stylish and cozy.

Owned by Manchester United legends Ryan Giggs and Gary Neville, Hotel Football overlooks United’s stadium, Old Trafford, approximately three miles from the city centre, making it the perfect location if you’re in town for a game. The view of Old Trafford can also be taken in from ‘Heaven’, the hotel’s all-weather rooftop football pitch, complete with retractable roof.

Located in the fashionable suburb of Didsbury, approximately four miles from the city centre, Didsbury House is a Victorian townhouse offering twenty seven chic rooms. Complementing this is a number of eclectically decorated lounges and a residents’ bar.

Ideal for those on a budget, Hatters Hostel has dormitories from under £20 and twin and double en-suite rooms available from around £60. Located in the Northern Quarter, Hatters is amidst the area’s bars and is close to the city centre’s sights. Breakfast is included, there’s a communal kitchen and activities are on offer.

Manchester is not renowned for great weather, so bring a jacket, an umbrella and a positive attitude. To get the best, visit in the summer; May, August and September often get the best of the sunshine. If you’re planning a visit based around watching some football, the season runs from August to May. The end of the year sees the Christmas Markets spring up, selling German beer, mulled wine and food against the spectacular backdrop of the town hall. 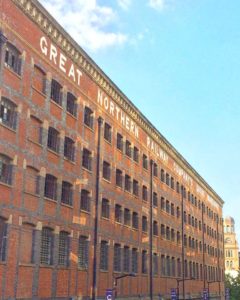 How to get around Manchester

The city centre is larger and more spread out than many other British cities, but is still manageable on foot. In terms of exploring the city, there are two main public transport options. Bus networks span the city; Piccadilly Gardens and Shudehill Interchange are the main central hubs. Bus journeys can be busy and slow, depending on the route, but is the cheapest way of taking odd journeys. The Metrolink tram network now extends to a lot of the city and is a comfortable way to travel, although a little pricey. Weekend and week-long tickets make frequent travel more affordable.

Manchester Airport is one of the best connected in the UK and is just nine miles from the city centre. Taxis into town are reasonably priced and trains also take visitors to central stations. The Metrolink tram network has improved enormously over the past few years, taking passengers from the airport to the city centre and a host of suburbs. Depending on where you’re going, the tram can take time, but is an affordable alternative from the airport. If flights into Manchester are not convenient, Liverpool John Lennon Airport is little over an hour via bus and train.

If arriving from other parts of the UK, Piccadilly and Victoria are well connected stations, providing train services to much of the rest of the country.

All photos by Benjamin Starkey.