Copenhagen is often called the biking capital of the world, with an infrastructure to match. Almost half of its population uses bicycles on a daily basis, cycling down endless bike lanes, separated from car traffic. Yet when I first arrived in Denmark, I was terrified at the prospect. Crowded cycle paths, the responsibility of owning a bike and the many strict rules that came with it hardly seemed worth it. After all, Danes do have a reputation of being “bike Nazis.” Eventually, I overcame my fear but not without some research and guidance from Danish friends, whose main advice was: “Don’t cycle like a tourist.”

And they mean it. Nothing annoys Copenhageners more than a tourist in their way. To keep your reputation clean, you must follow the strict cycling protocol only the Danes know and understand. If you’re anything like me, and love looking like a local in every place you go, here are a few tips on keeping your biking experience in Denmark safe, legal and “cool.” 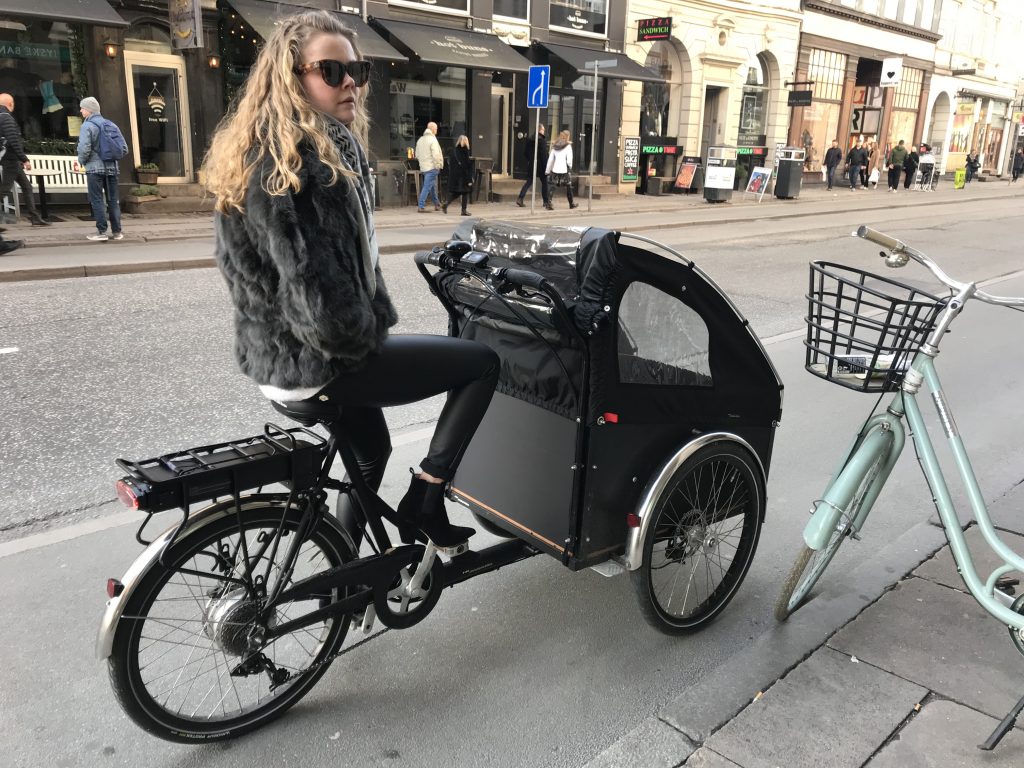 All Danes are sticklers for rules and this goes for cycling, too. It’s very rare to see a local cross the street on a red light, let alone cycle through it. This obsession with the rules is what makes biking in Copenhagen so safe and predictable. Don’t try to outsmart the system, be a part of it.

Same goes for signaling – a must while riding in Copenhagen. Extended left arm for left turn, extended right arm for right turn, an arm extended upwards when stopping. Want to really look and feel like a local? Signal, even when no one is watching.

Always stay on the right side of the bike lane.

As in driving, left cycling lane is used strictly for passing. Sure, Danes break this rule sometimes, when biking in couples. But they’re much more skilful at doing so without disturbing others. Trust me, you’re not there yet. 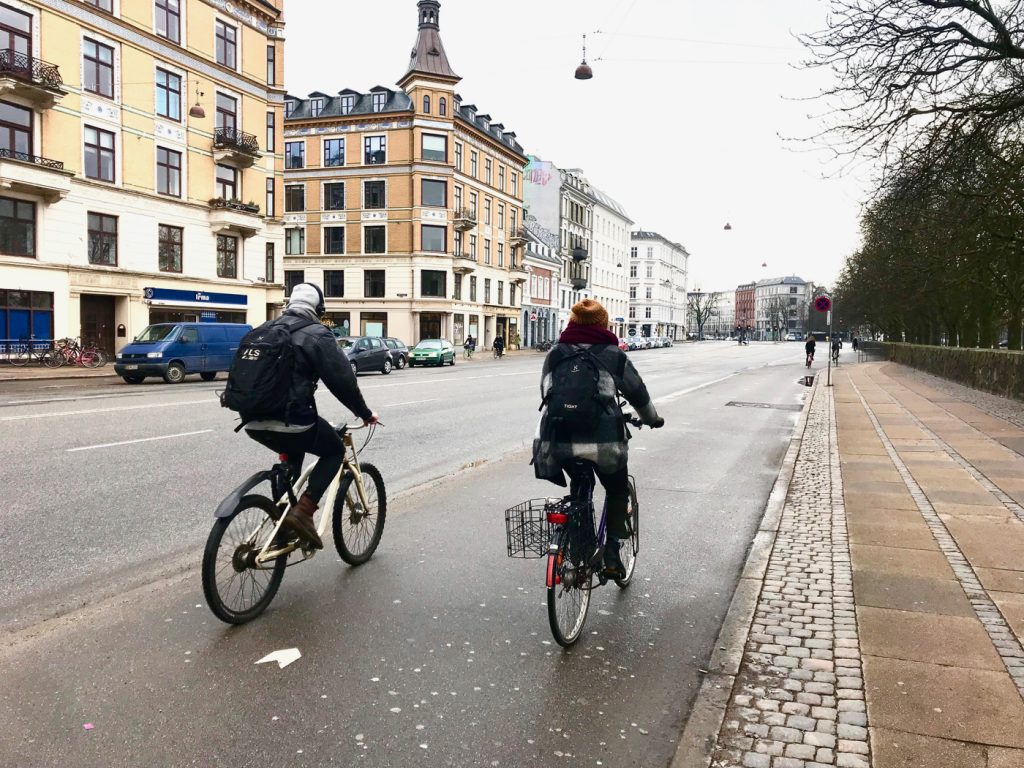 Don’t panic when it gets busy.

One of the most intimidating things I had to do while biking in Copenhagen was to navigate red lights in rush hour. Dozens of cyclists come to a stop in one big pile, just to form a straight line again within seconds, once the light changes. It’s a sight to see. If you find yourself in the middle of such a jam, don’t panic. Stay as far to the right as possible, and when the lights turn green, start peddling slowly and let the fast cyclists pass you. Soon you can safely move all the way to the right and continue your journey.

In general, and especially during rush hour, it’s important to keep up a steady pace while biking. Try to go with the flow, and be as undisturbing to others as possible. If you must slow down or stop, do so gradually, signal profusely and pull as much to the right as possible.

Don’t worry too much about your lock.

If you ever cycled in just about any big city outside of Denmark, you’re probably used to serious and heavy bike locks. Rest assured, when cycling in Copenhagen you can, and should, leave your 5-pound Kryptonite U-Lock at home. The majority of the population here uses the same exact type of bike security – a small rear wheel lock. These are cheap, lightweight, and would probably take a New York thief two seconds to bite through. Yet in Denmark, a country known for its safety, this symbolic lock is more than enough. In fact, using bigger and more expensive locks would probably make you look like a tourist. 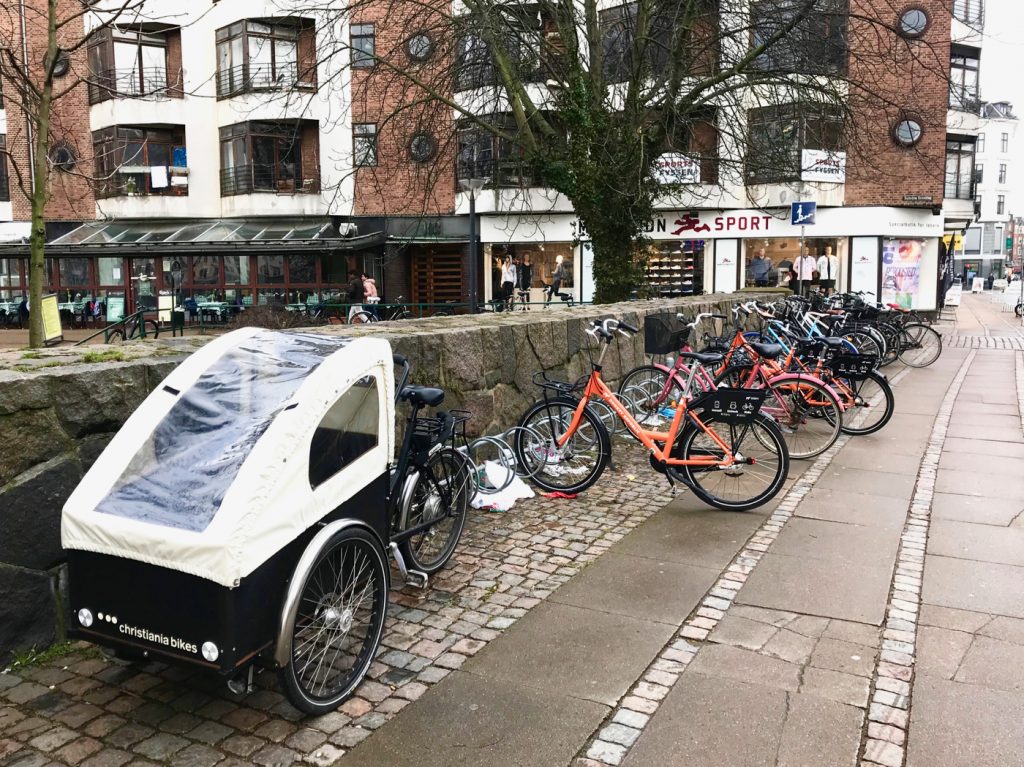 It’s the law, and failure to obey will cost you a hefty fine of roughly $100. You must have a white light at the front of your bike pointing straight forward and a red light in the back pointing straight back, at all times. Likewise, you must have working breaks, reflectors and a bell. The lights must be turned on around the same time as when the street lamps come on. Forgetting, or ignoring, to follow this rule is one of the most common mistakes I’ve seen foreigners do. Beware, though, bike lights do get “borrowed,” so it’s always a good idea to keep yours in your pocket when leaving the bike.

But don’t worry about a helmet.

Unlike bike lights, helmets in Denmark are optional. They’re not required by law, and only some Danes use them. A popular trend that seems to be catching on quickly in Copenhagen are inflatable helmets – a big chunk of material that hangs around your neck and inflates upon impact. These are quite expensive but less bulky and more hair-friendly than traditional helmets. I never got around to buying one but if I did, it’d surely help me to look like a local. 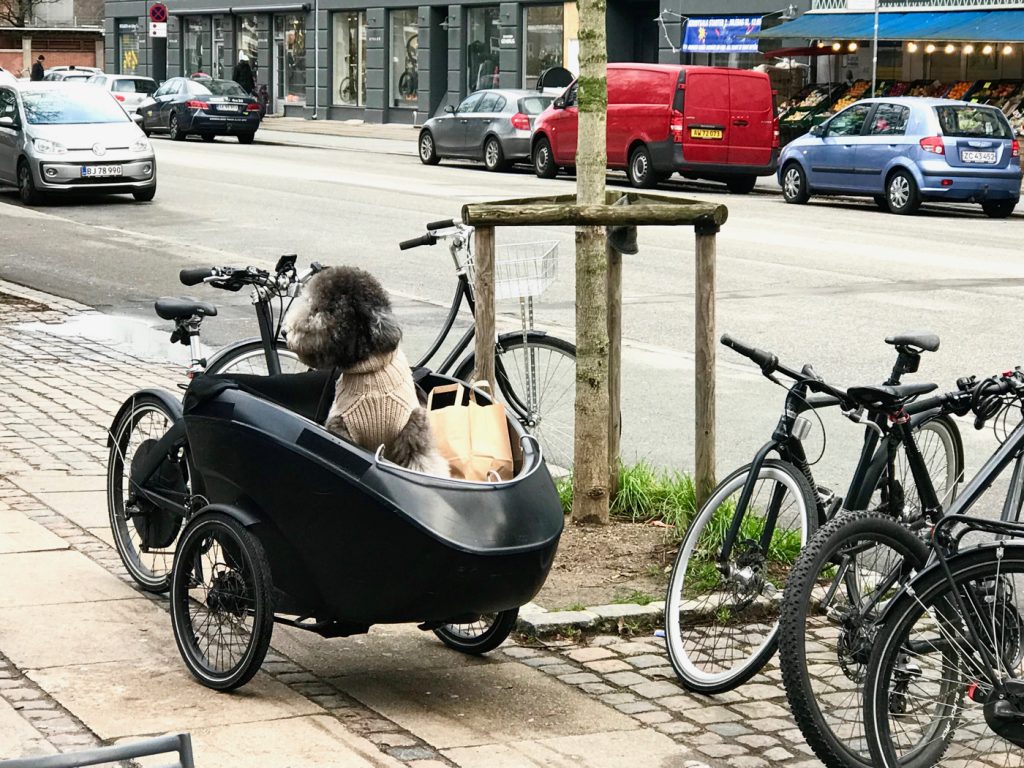 Be careful when making a left turn.

Making a left turn on your bike in Copenhagen comes with its own strict set of rules. The best way to start is by observing how others do it, but here’s a rough idea. Stay to the right and cycle through the intersection while signaling that you’re stopping. Stop at the corner of the street you want to turn into, as close to the curb as possible, and in front of the cyclists already waiting there. Once the light turns green, go ahead. You’re now on your new path and ahead of all bike traffic.

Always look over your shoulder.

As with driving, never change lanes without looking over your shoulder first. Danes do so unfailingly. In fact, I got so used to doing this that even when walking, I look back before I turn.

Last but not least, if you see a bus stopping, stop and let the passengers unload. They often get spit out onto the bike lane, unless there’s a dedicated bus island. This can be very annoying, especially if you’re going fast and the bus comes out of nowhere, but knowing this rule definitely gets you extra points with the locals. In fact, one of the first compliments I received for my biking in Copenhagen was from a Danish friend who saw me stopping for a bus.

When it comes to following the rules, you can’t overdo it in Denmark. Danes live and breath order, and biking is no exception. The good news is that once you get the gist of it, you’ll see that cycling in Copenhagen is quite relaxing. In no time, you’ll find yourself huffing “tourist” at a person who stops short in front of you.

Anastasia is a lifestyle and travel writer based in New York City.