Devonport, on Tasmania’s north coast, is a popular arrival point for trekkers heading into the mountains and wild rivers of the island’s interior. Don’t be in a hurry to hit the road, though. There’s plenty to see around Devonport, and most of the area’s attractions can be easily explored on foot. 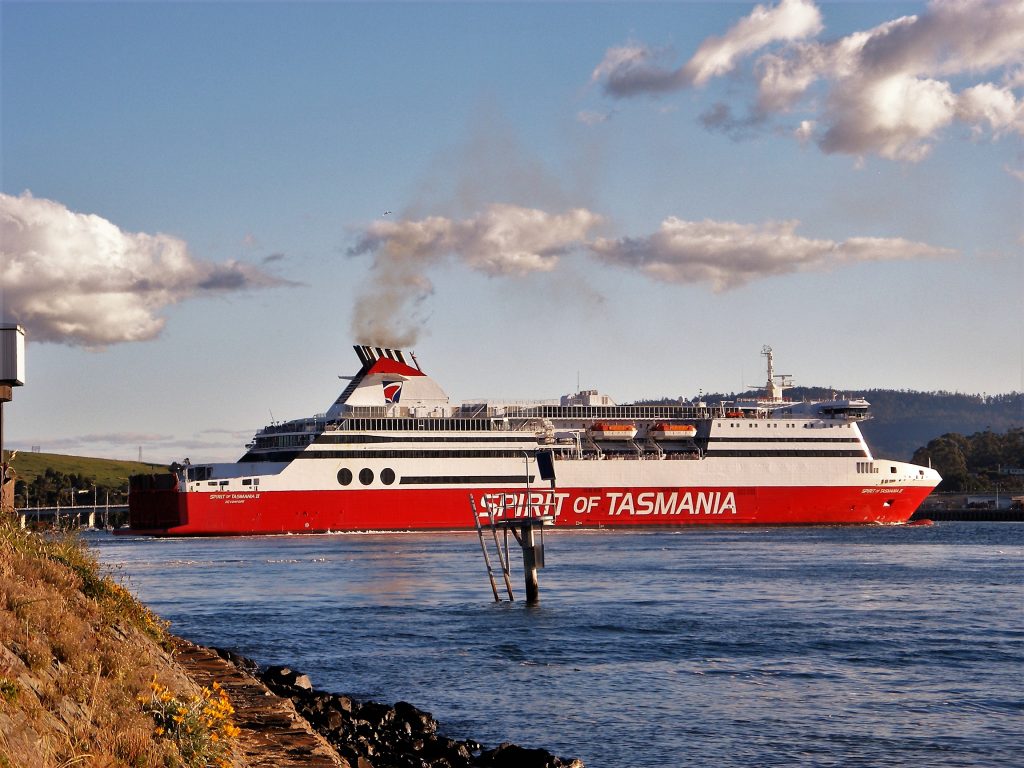 Devonport has a small airport, but most visitors arrive by the Spirit of Tasmania ferry from Melbourne, which takes about 10 hours. Various accommodations are available, from a simple recliner on a public deck to a deluxe cabin with windows and a TV. For overnight trips, I recommend a moderately priced interior cabin. Why pay extra for a window when you’re sailing in the dark?

The crossing is fun, like a mini-cruise. There’s a casino, a gift shop, and a movie theater, plus an assortment of restaurants and bars. But be warned: the Bass Strait can get rough. I had drinks in the lounge with some nervous bikies (Australian for bikers). Their expensive hogs were down in the hold, perched precariously on kickstands. Luckily, the seas stayed fairly calm. 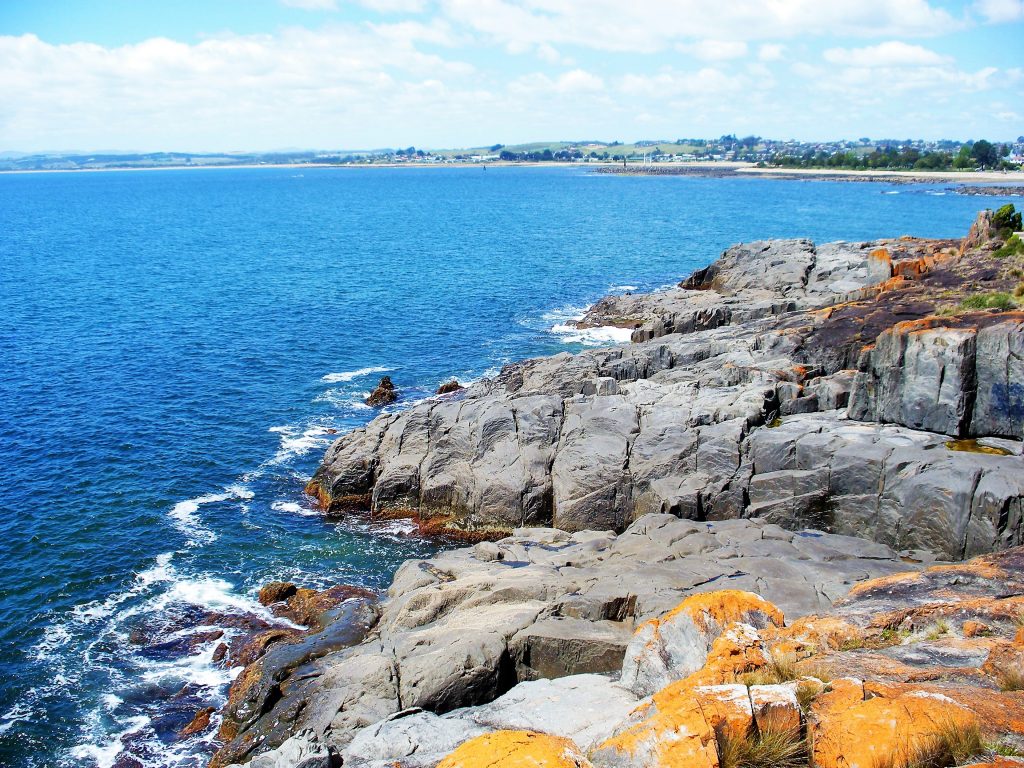 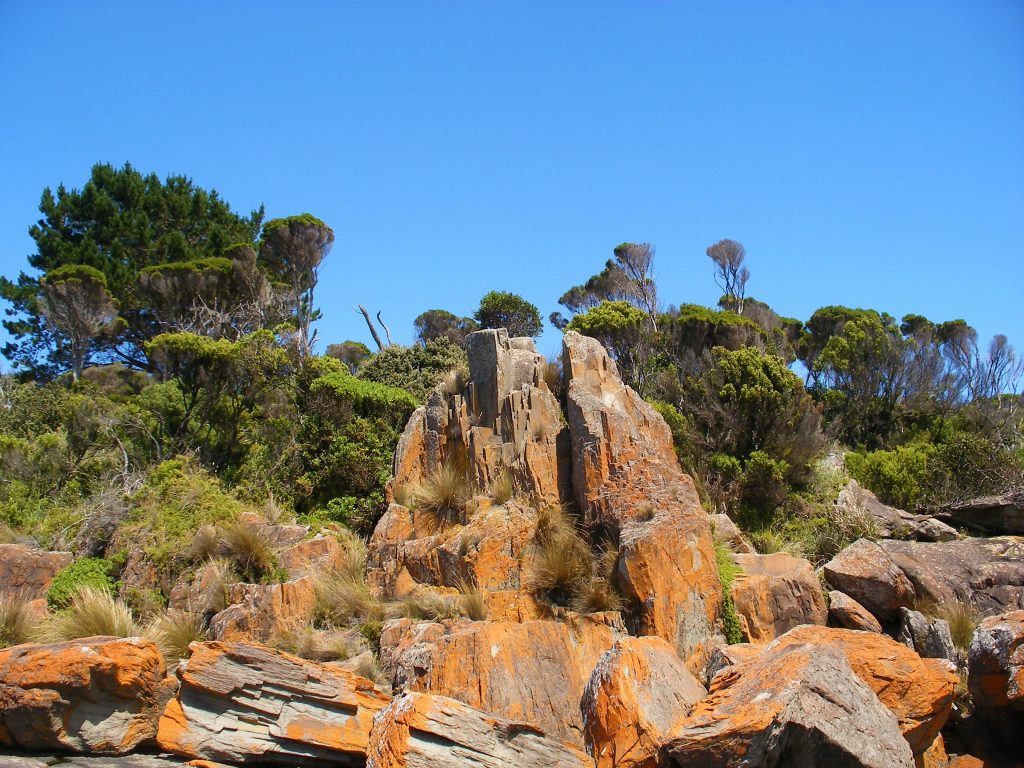 The best walk in Devonport starts at the mouth of the Mersey River (west bank) and takes you along the coast of the Bass Strait to Mersey Bluff. This dolerite headland was formed during a volcanic eruption 185 million years ago, and subsequent erosion has given a distinct look to the fractured rock. As you hike, watch for birds (colorful galahs), lizards and wallabies. 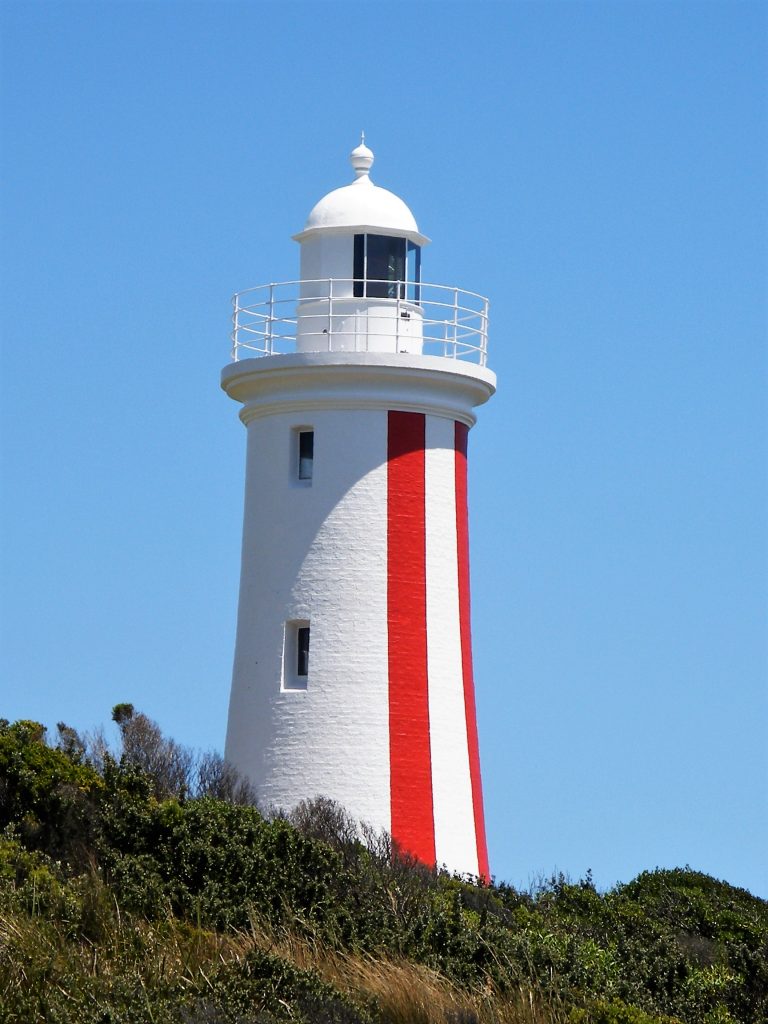 The lighthouse at the top of the bluff was built in 1889, and is famous for its bright red vertical stripes. This “daymark” helped ships navigate the dangerous coast during daylight, when the beacon wasn’t visible. Mersey Bluff Lighthouse, which is still in use, was electrified and demanned in 1920. 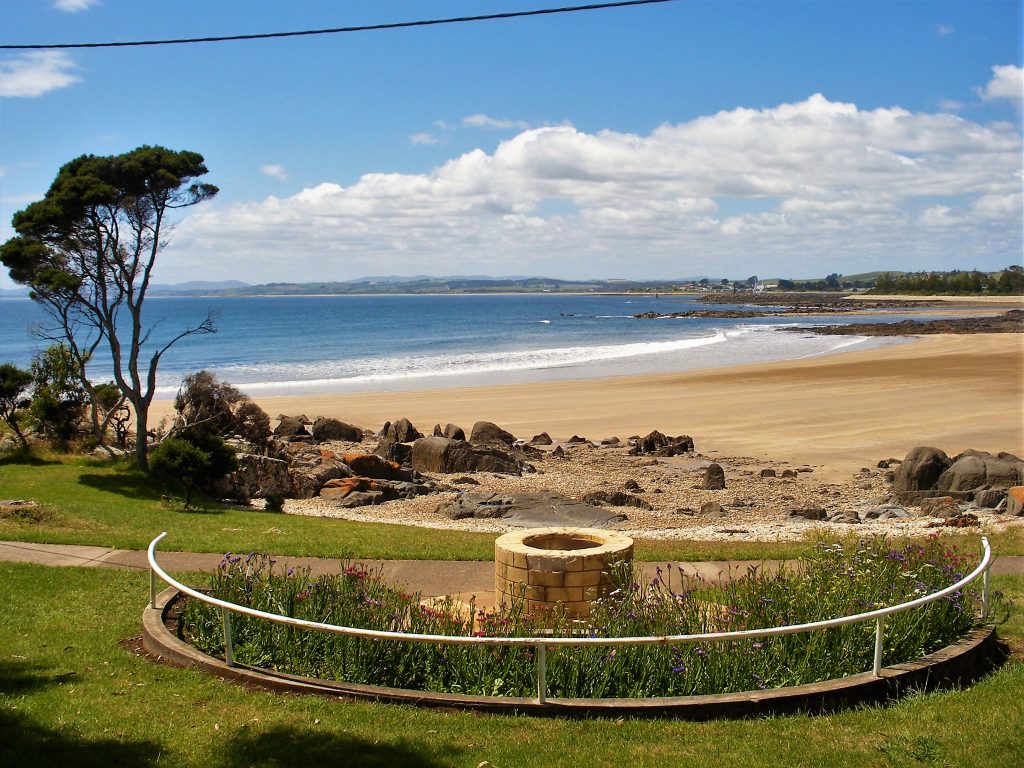 There are a number of beaches in Devonport, but this is the only one with lifeguards during the summer. If you’ve ever been swept up in a Tasmanian riptide, you’ll appreciate their presence. It’s also the most sheltered beach, being on the east side of the bluff. During a receding tide, thousands of tiny crabs appear, burrowing speedily into the sand as you approach them.

Facilities include changing rooms, picnic shelters and BBQs, as well as a bike track, skate park, and playground. 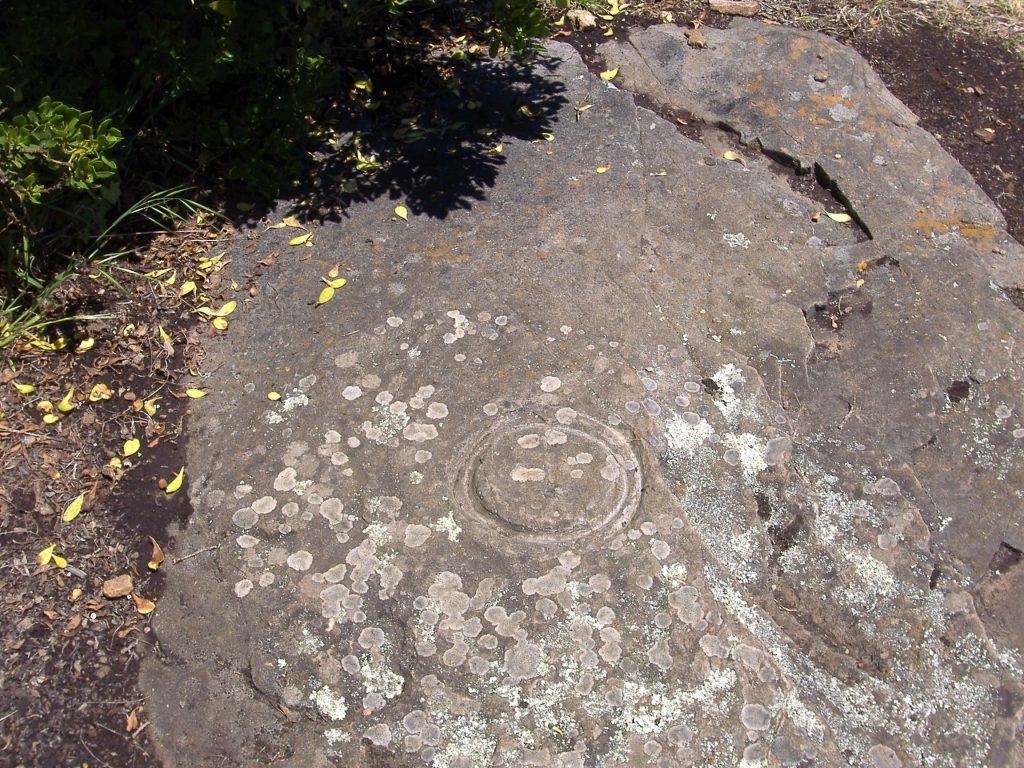 Look closely at the rocks on the bluff. Aborigines carved them with mysterious petroglyphs thousands of years ago. Tiagarra, the second oldest Aboriginal museum in Australia (1976) is here, but only open by appointment. Follow the Tiagarra Walking Track behind the museum to see a nice variety of petroglyphs. 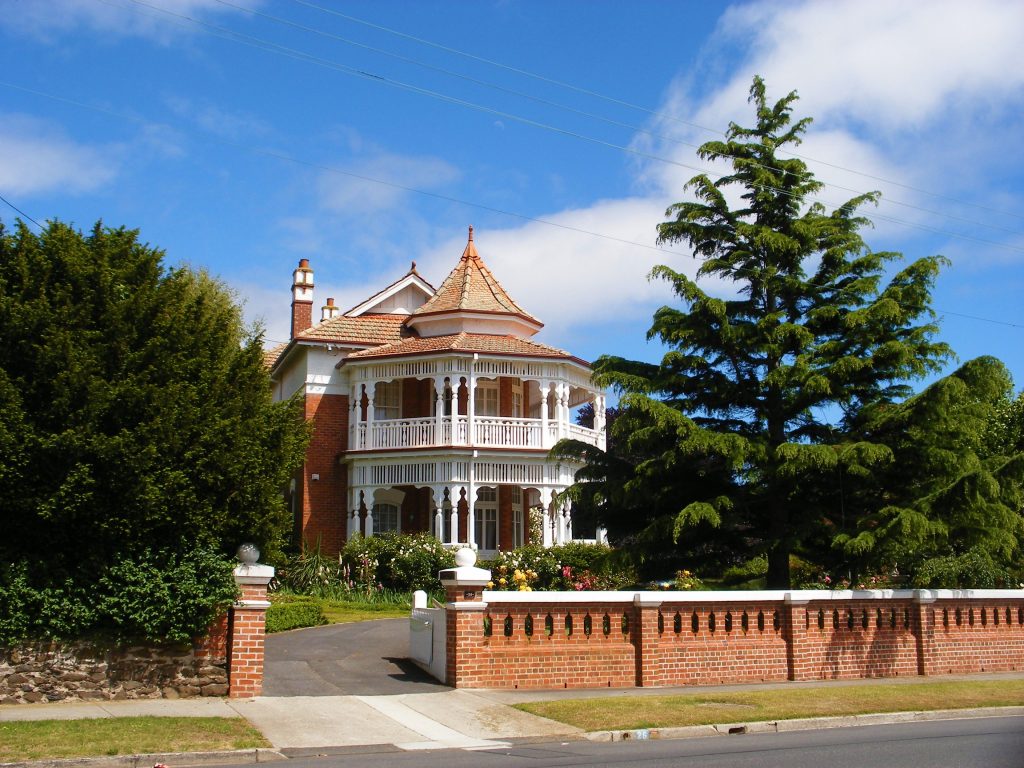 A stroll along Devonport’s seaside Victoria Parade takes you past some notable historic houses. Many were built around the turn of the last century in Federation style, which is similar to Queen Anne. They’re asymmetrical and heavily gabled with decorative peaks and chimneys. Look for wraparound porches on the first and second floors, rimmed with intricate balustrades in wood or wrought iron. The finest examples are Malunnah and Moor’s Court (pictured).

If you’d like to tour a historic house, head for Home Hill. Australia’s only Tasmanian Prime Minister, Joseph Lyons (1932-1939), lived here with his wife, Dame Enid, and their 12 children. Dame Enid was the country’s first female Member of Parliament, and Home Hill remains furnished just as she left it in 1981. 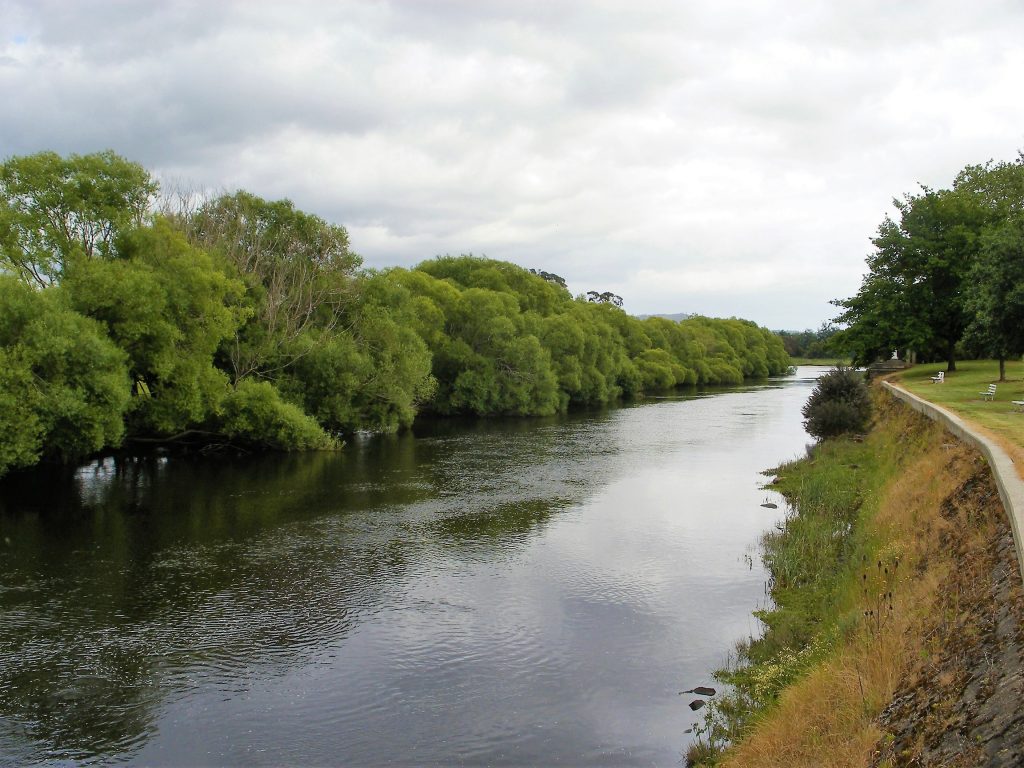 Until 1890, Devonport was two separate cities: Formby on the west bank of the Mersey River, and Torquay on the east.  After unification, a bridge was built to connect the two coastal communities. There’s also a little ferry that chugs across the river at regular intervals. If you’ve never been to Liverpool, here’s your chance to “ferry ‘cross the Mersey.”

Kayaking is popular, and the river gets more scenic as you paddle south toward the small town of Latrobe. Watch for ducks and black swans. 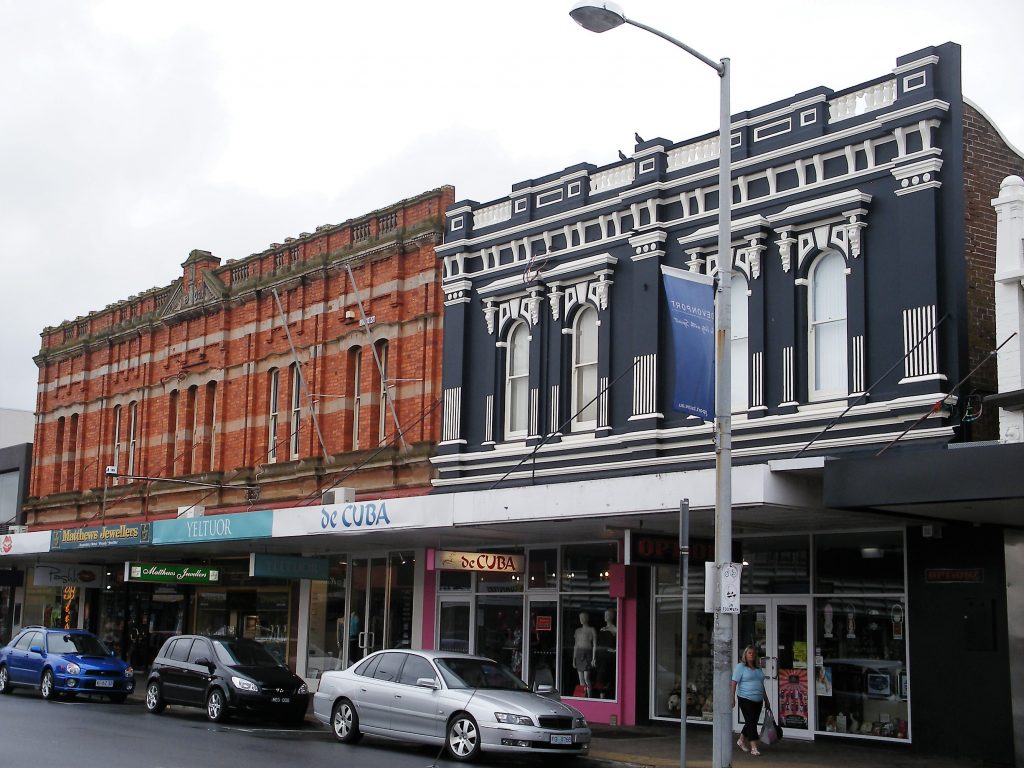 Devonport’s central business district is on the west side of the river. There’s a pedestrian mall, a movie theater, and plenty of restaurants. My favorite is Stonies Café on Rooke Street: fantastic food, super-friendly service, and walls covered with old rock-n-roll memorabilia.

The Paranaple Arts Centre houses the Devonport Regional Gallery (Tasmanian art) and the Visitor’s Information Centre. Near the mouth of the Mersey, you’ll find the Bass Strait Maritime Centre, a fascinating museum that offers two-hour sails on a historic ketch.

Railroad enthusiasts should seek out the Don River Railway. This museum (located a few minutes west of downtown, on the banks of the Don River), features vintage locomotives running hourly trips to Coles Beach and back.

Most hotels are on the west side, too, though I do like the Edgewater in East Devonport. It’s close to the ferry landing, so you can easily zip across the river to downtown. 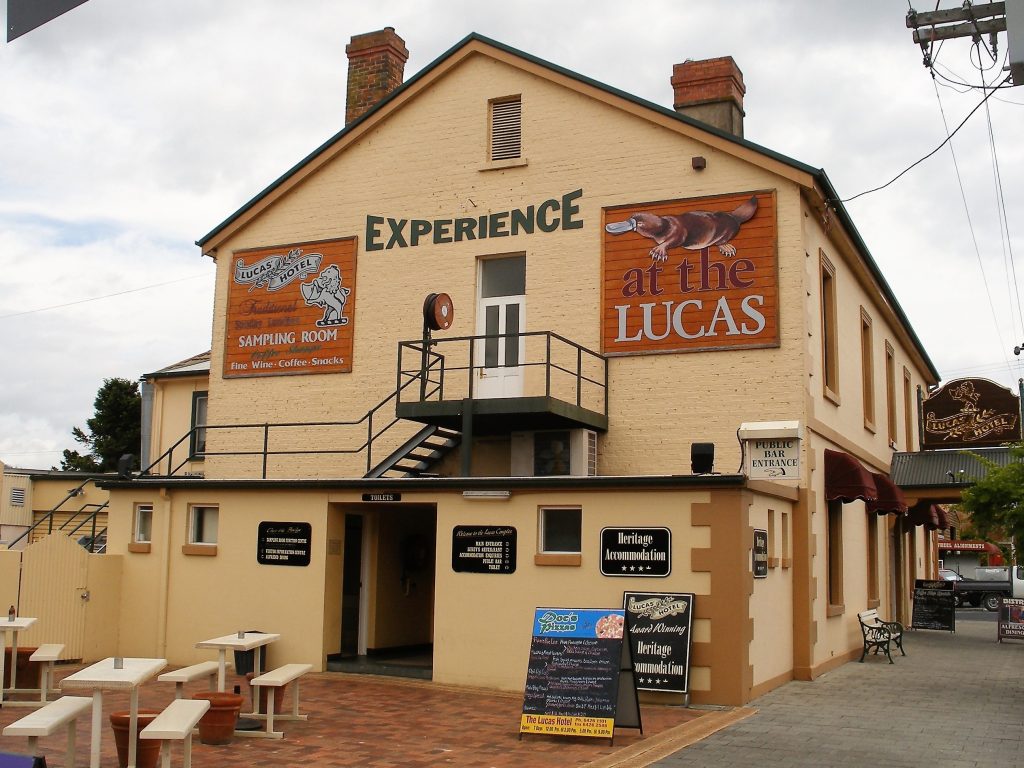 Latrobe is only 5 miles south of Devonport, and the bus ticket is cheap. There’s a store here called Reliquaire that’s unlike any I’ve seen. Imagine rooms stuffed to the bursting point with strange dolls (many life-size), fantastical home and garden decorations, masks, toys, games, obscure books, and novelties. There’s even a Halloween Hall with creepy music, evil puppets, and a fine selection of Living Dead Dolls (Edgar Allen Poe and Annabel Lee!).

Take your new dolls over to the Lucas Hotel for some great food and drink. I love their bacon-wrapped scallops. To work off your meal, stroll along the river at Bells Parade or follow the Sheean Walk, which is lined with plaques commemorating the sacrifices of Australian veterans, as well as some beautiful bottle brush trees.

On Australia Day (January 26th) the Henley-on-Mersey Regatta takes place in Latrobe. Contests include whip cracking, wood chopping, cherry spitting, and the bizarre sport of gumboot throwing (known as “welly wanging” in the UK). It’s pretty simple: whoever can throw a rubber boot the farthest wins. The most popular event is ferret racing. These wily polecats were once used by Tasmanian farmers to hunt rabbits, and they’re still held in high regard in the countryside around Devonport.