Last winter, I spent far longer in Mexico than intended. Initially, my plan had been to head down to Central America after whizzing around Mexico. However, I discovered that Mexico was too beautiful (and large!) to hurry. Valladolid in Yucatan state was one of the many lovely colonial cities I found myself lingering. The longer I spent there, the more I grew to love it. Central America could wait.

Ironically, one of most alluring things about Valladolid is the fact that it doesn’t receive as many visitors as most of the other so-called ‘magic’ towns of Mexico (a title bestowed by the country’s tourist board). Consequently, Valladolid has a more, dare I say it, authentic vibe. It is easy to traverse by foot and the locals are warm and friendly.

As well as some lovely colonial architecture, a sprinkling of tempting shops, some decent restaurants and the largest private collection of Mexican folk art in the country, it also has a cenote (a limestone swimming hole) situated slap-bang in the middle of the city. It’s a great base to explore from too, with easy access to the ancient ruins of Chichen Itza, Ek Balam and a variety of other cenotes located not far outside the city.

A Refreshing Dip in a Cenote

These limestone swimming holes are a feature of southern Mexico. A vast network of caves run underneath the earth’s surface, and cenotes are created when the roof of a cavern collapses. Thought to be the entrance to the underworld by the Mayans, the water is frequently crystal clear and a wonderful way to cool down from the intensity of the Mexican sun.

I hired a bike and rode a couple of miles out of Valladolid to Cenote X’Keken. Swimming in the cathedral-like cave was amazing. Bats flew overhead, while small fish nipped at my heels. Being early on a Sunday morning I had the place to myself, making the experience even more special.

There are several sinkholes close to the city, but I didn’t have to go so far to reach Cenote Zaci, which is in Valladolid itself. Because of its location, it is more crowded than the out-of-town cenotes, but the water is a beautiful color and there is an adjacent restaurant where I enjoyed a post-swim cocktail. 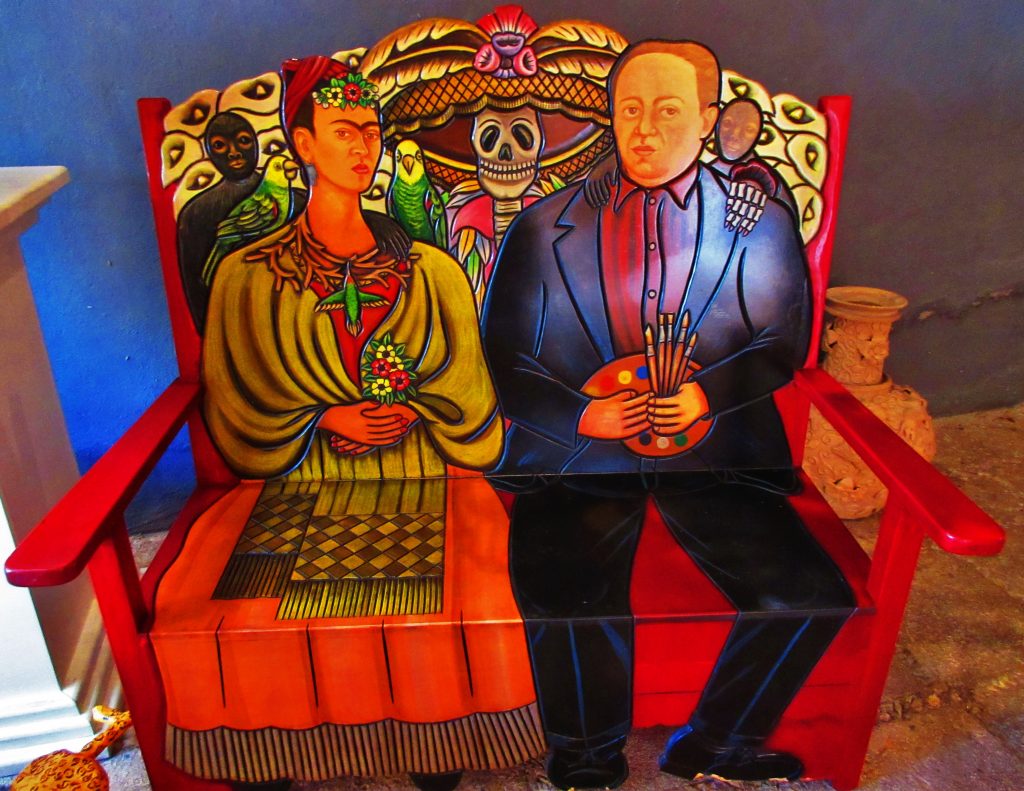 American ex-pats, John and Dorianne Venator have been collecting Mexican folk art for a very long time. Scouring every region of Mexico, they have built up the largest private collection in the country. Their property, located just off the main plaza, took nearly nine years to renovate. It is now home to the couple and their collection of over three thousand pieces of art.

John and Dorianne open their home every day to the public and provide a tour, with all proceeds going to local charities. The house itself is an incredible piece of architecture and is almost as fascinating as the vibrant and colorful artwork itself. The combination of both is a feast for the eyes.

I was most impressed by John, who spent time talking to our group and answering any questions we had. Before I visited Valladolid, I had no idea Casa de los Venados even existed. It is now one of my favorite places in Mexico. (Casa de los Venados is at Calle 40, #204 x 41 col. Centro, Valladolid. Tours take place every day at 10:00 am and booking is not required. Minimum donation of US $5.00, which goes to local charities.

Chichen Itza – Exploring the World of the Ancient Mayans 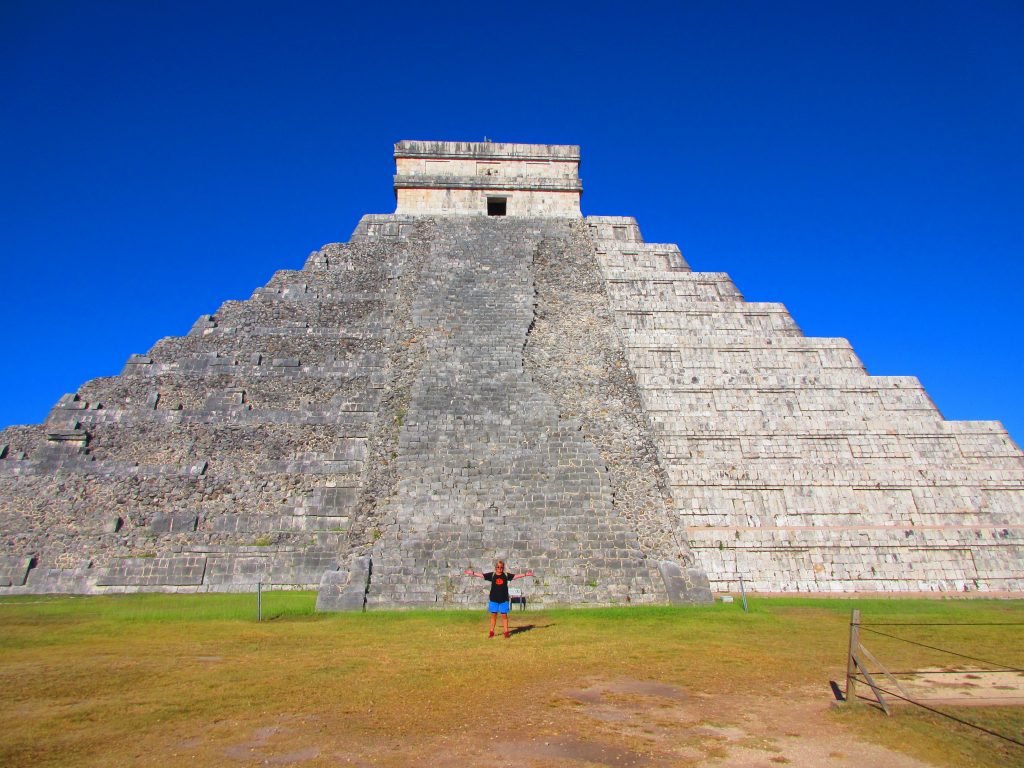 The ancient Mayan city of Chichen Itza lies just twenty-four miles from Valladolid. Although it is crowded and hot (there is very little shade), these magnificent ruins are well worth a day trip.

Having visited other Mayan sites, I was a little taken aback by the Las Vegas style reception center, presumably built to cope with the never-ending flock of tourists arriving from Cancun. The trick is to take an early bus from Valladolid and at least partially avoid the crowds and also beat the heat of the midday sun.

The most well-known of the monuments is Il Castillo, the iconic pyramid. Since a tourist fell to her death from the pyramid in 2005, visitors are no long permitted to climb it. Walking tracks link the various ruins and indigenous Mayans sell handicrafts from stalls they set up along the way. (From Valladolid, it is possible to take a bus from the bus station or alternatively it is possible to arrange a tour at a travel agency.

A Spectacular Sound and Light Show

In the evenings, tourists and locals find a spot to sit on the wall opposite the Convent of San Bernardino de Siena. The facade of the impressive convent comes alive with the colorful story of Valladolid’s history. The graphic light extravaganza, Noches de la Heroica Valladolid, is shown in both Spanish and English.

This part of the city feels like small-town Mexico. Children play on the field in front of the convent or in the adjacent playground. Locals sit outside the restaurants enjoying a beer. The atmosphere is relaxed and sociable. (Check timings for sound and light show, as it does vary depending on the time of year. The show is free). 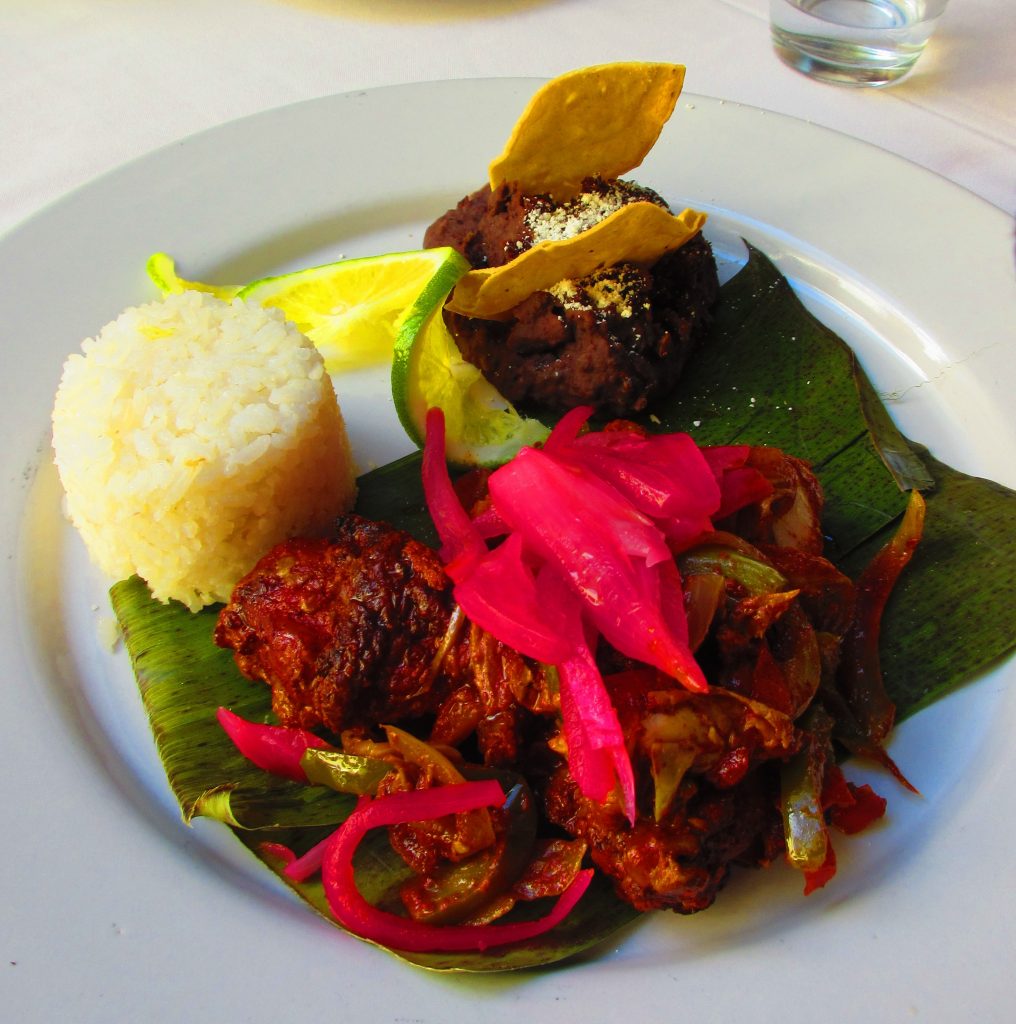 Valladolid has some excellent dining options, especially for those who want to sample some local Yucatan dishes. My personal favorite was Pibil – marinated chicken wrapped in banana leaves and cooked in a BBQ pit. It was, without doubt, one of the tastiest meals I had in Mexico.

One of my favorite restaurants in the city was Yerbabuana de Sisal. Friendly staff serves delicious vegetarian dishes with complementary and colorful dips and chips. When it started to rain, they even asked me if I would like to bring my bike inside.

La Casona de Valladolid, situated on the main plaza, is another good choice. Traditional in style and cuisine, the pretty dining area is set around a fountain. Colonial décor and interesting folkloric touches add to the ambiance. 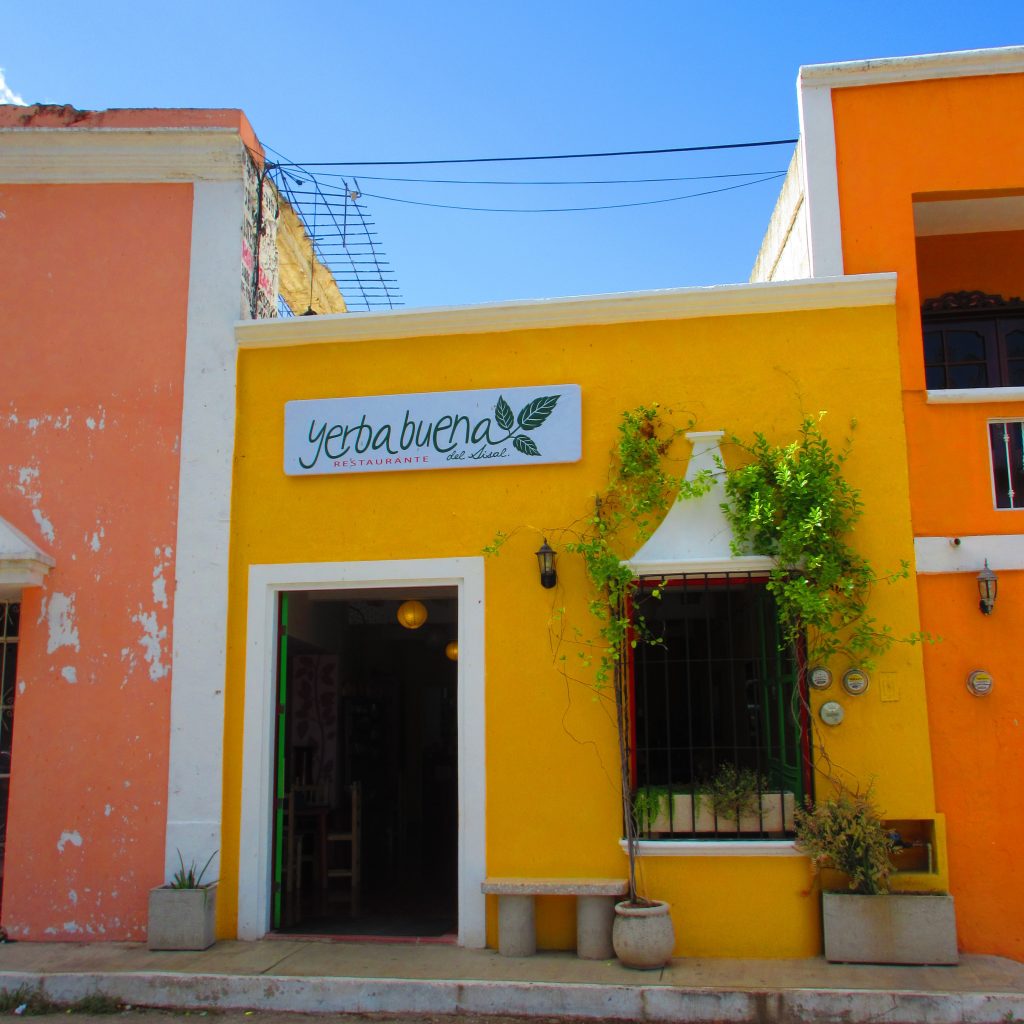 This colorful street is the city’s showpiece. With its pretty pastel-painted buildings, it links the main plaza to the San Bernardino convent. It’s never crowded, so is a pleasure to wander along and dip into the occasional café or shop.

There are a few specialty shops including Pancho Vila Tequileria, a cute pink store specializing in tequila and mezcal. It is worth checking out the extraordinary labels on the bottles. There are some tempting Mexican trinkets too. You can’t miss the life-size skeleton guarding the door.

Chilling in the Central Plaza 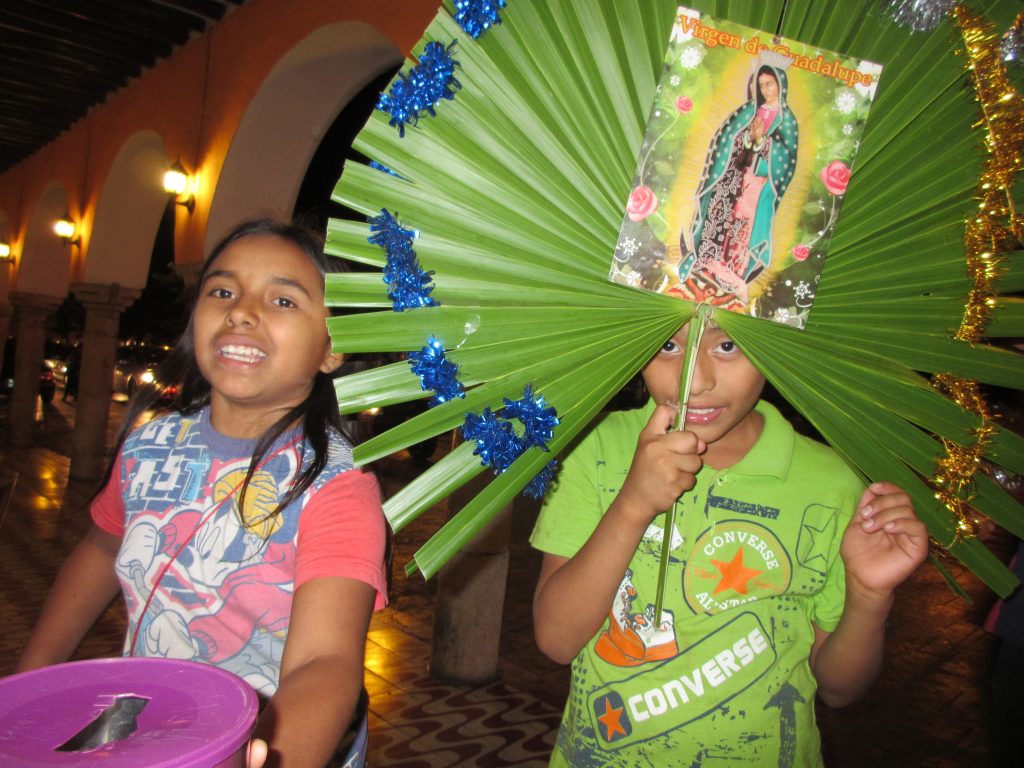 Soaking up the atmosphere in the central plaza is an enjoyable way to spend an evening in Valladolid. Having a michelada outside a bar while people watching on balmy Yucatan nights is like being transported to quintessential Mexico. Families hang out, old men sit around chatting and vendors sell local handicrafts. When I was there, I glimpsed into the cathedral to see a couple kneeling at the altar taking their vows.

It is quite likely that Valladolid will one day make it onto the radar of the masses. For now, it remains one of the most low-key of Mexico’s historic colonial cities. With its provincial small city charm, Valladolid is often overlooked for the nearby glitzy destinations of Tulum and Cancun. If you ever find yourself in Yucatan, don’t make that mistake – Valladolid’s hidden secrets may just surprise you.